I got married in October and let me tell you, planning a wedding is ridiculously stressful, not because of the seemingly endless tasks ahead but mostly because other people feel it is their prerogative to give you their opinion and kindly remind you of all the things you absolutely must do. Me and my now husband Matt, ignored all of that and did only what we wanted.

After several discussions and lots of plotting, this seemed to be to incorporate as many video game elements into our wedding day as possible, as gaming has been a huge part of our respective lives before we met and continues to be a huge part of our lives together, so of course they had to play a central role in a day that is supposed to reflect who we are. 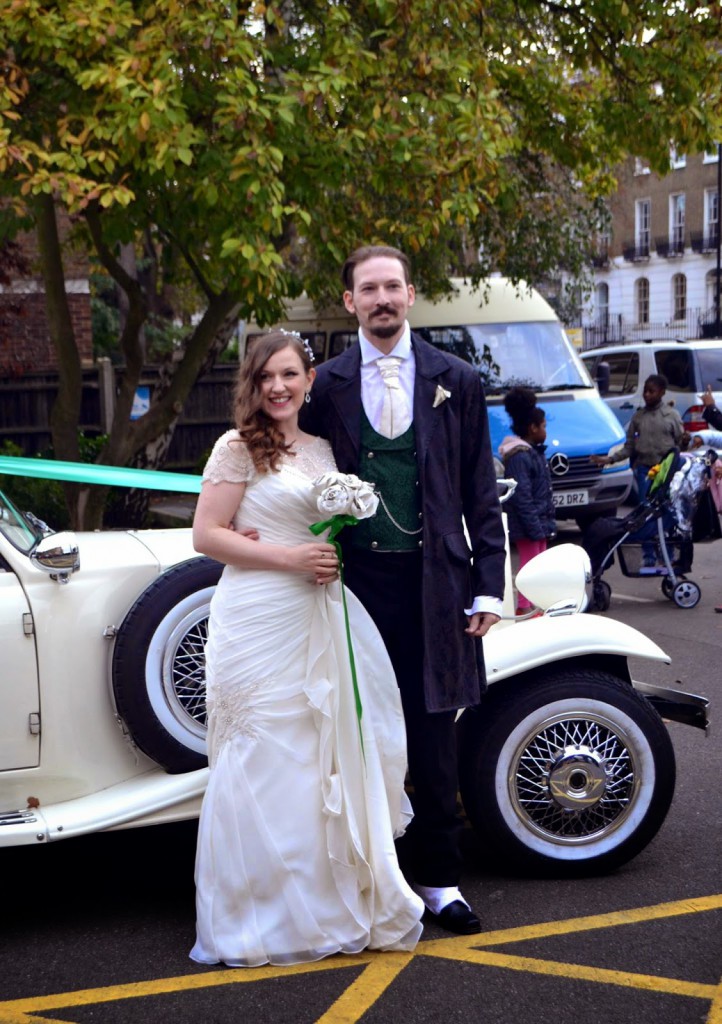 Portal 2 holds a special meaning for us. Not only is it a fun and intelligent puzzle game, it is a literal analogy for our relationship; working together like Atlas and P-body, life is a brutal series of cruel and twisted obstacles and the only way to overcome these challenges is through patient, highly communicative teamwork.

If you’ve ever wondered how strong your friendships/relationships are, play the co-op mode on Portal 2…if you dare.

Even the trailer for the co-op part of the game hits home perfectly “The two of you have formed an excellent partnership, now it’s time for your real purpose.”

So how could we possibly pay homage to this amazing title? Simple. Matt’s aunt is an amazing baker and offered to make and decorate our cake however we wanted it. However we wanted. Dangerous words to a gamer. It wasn’t long before Matt was sketching out an elaborately paneled cube centred with small pink hearts and topped with two little robots holding guns. His aunt asked what it was and he said – very proudly – “It’s a companion cube!”

And of course we had to have Atlas and P-Body as cake toppers! The traditional top-hatted gent and veiled lady simply wouldn’t do!


As we had a Catholic ceremony (lots of Irish family on both sides!) we needed to choose a suitable piece of music for my walk down the aisle, that would work well on the organ and not offend the church in any way. I dislike the various wedding marches that I’ve heard and with Matt being a film critic, every iteration of traditional wedding themes have been played to death over the years.

What we needed was a piece of music that was triumphant, a piece that announced with certainty that I was about to enter the church and that kept a steady pace – else I would be running down the aisle!

Once again, video games stepped up and saved the day. Matt contacted the organist (a very talented individual with an exceptional level of classical training) and emailed him sheet music, stating we wanted this and only this.. just a little slower tempo.

It was called the Overworld Theme by Koji Kondo. This may not mean much to many of you and admittedly, Matt and I sold it on the idea that it was simply a lovely classical piece by a Japanese composer. Obviously, there was more to it than just that.

If you didn’t know, the Overworld Theme is more commonly known as The Legend of Zelda main theme!

As the first chord began on the organ, I teared up because the realisation hit me that not only was I about to get married but that the music that instantly brings me happiness whenever I hear it was playing as I approached my future husband.

It was perfect and the congregation were divided between “Oh, this is different, it’s really nice” and “ARE YOU FREAKING KIDDING ME! AWESOME!”

In addition to my wedding march, The Legend Of Zelda played an even bigger and more permanent role at our wedding. The ring that I’m currently wearing on my left hand has a celtic band running around it broken only by the Triforce.

I’m sure I’ve gone over this plenty of times but the Triforce symbolises courage, wisdom and power and has always been my mantra when things get tough.


Admittedly, not everything was video game themed – our flowers were handmade from pages of our favourite novels and the tables were themed after Marvel and DC superheroes – but we had another vital nod to video games left up our sleeves. During the reception, while our guests were eating pie, mash and eels (we’re from London, it made sense), we compiled a list of our favourite video game scores and musical pieces and received a lot of compliments from our non-gaming guests, many of whom wanted to know who composed them!

This was a great feeling as it meant we could share our love of video game music and educate our non gaming friends and family. I’d like to think that it made them stop and consider that games are a valid medium of entertainment and a lot more serious than they might have previously thought. And if not, they got to shovel pie into their face while a thunderous voice boomed ‘DOVAHKIIN, DOVAHKIIN, NAAL OK ZIN LOS VAHRIIN!’

Those who knew the music instantly seemed very impressed that we had included the pieces in our wedding and I received a lot of positive feedback about it all night!

While we adhered to a lot of antiquated traditions, I’m glad we bucked against the trend and injected the whole day with gaming elements that ensured our wedding was memorable, unique and felt truly indicative of us as a couple. So if any of you out there are thinking of getting married soon, or are planning a birthday, or a bar mitzvah, or a royal coronation, just remember that the day is about you and should include things that make you happy.

If those things happen to be video games, don’t listen to anyone who says they don’t belong there – because if they don’t, then apparently neither do you.