A heavy book hit the shelves this week! Savage Dragon #200 is weighing in as a ‘100-Page Super Spectacular’ and also carries with it the legacy of Erik Larsen’s career, where he has stayed with Dragon and now Malcolm as the titular character.

From the Image Revolution to the age of digital comics, you can rarely find a more ingrained creator or publisher in the industry.

He is able to playfully tip his hat to the Silver Age and Jack Kirby while moving his own book and stories into the future.

The Image Comics CFO took the time to talk his milestone issue with us—and for that we are grateful and wish him and Dragon many more milestones in the future!

FOG!: Erik – thank you so much for taking the time! When we saw #200 was hitting shelves, our fins went straight up! Thank you for so many awesome issues! What does this milestone mean to you?

Erik Larsen: Every issue is a milestone, really. Each one is another number reached and another issue under my belt. The big ones, 50, 100, 150 and 200 are just that much sweeter because I pull out all the stops and involve a number of others to join in the celebration but I don’t think of any issue as ordinary, really.

In my mind they’re all a big deal.

I love following your process on Twitter and Facebook, and that you listen to fans and other professional’s feedback. It is obvious that you care a lot about your fans! How has the community given back to you recently?

They’ve been very active in spreading the word and helping keep track of it all. There’s a monthly podcast that just touts Savage Dragon called The Savage Fin-Cast, which has been a lot of fun to listen to and participate in and the legions that catalogue the Savage Dragon happenings for the  Savage Dragon Wiki have helped enormously. 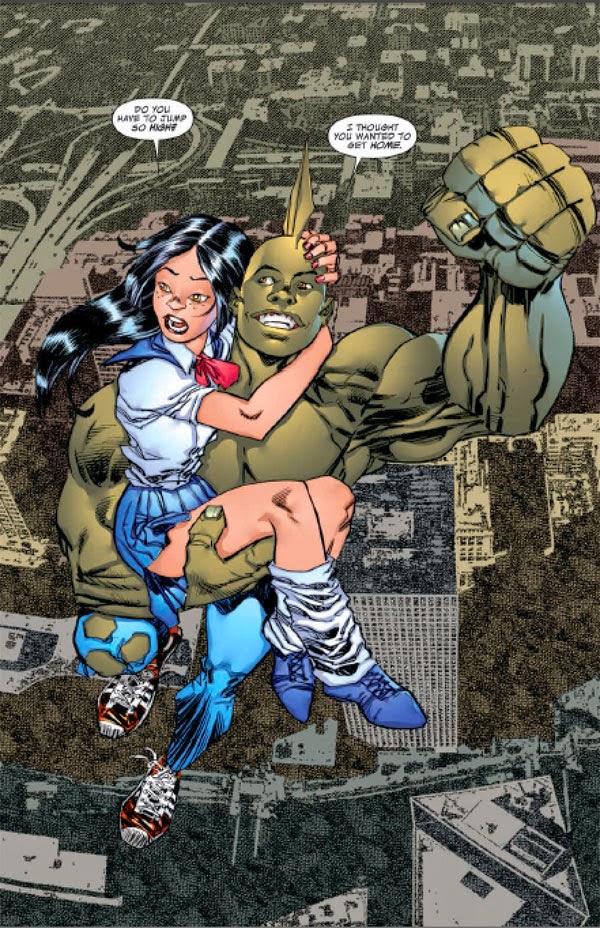 To get caught up, people must read the all-splash issue #199! In writing that issue, was it challenging to move the story along? I consider this a masterpiece! More please! I love when you have fun with the format.

That was a gas to work on but it’s certainly not necessary to have read that in order to enjoy #200! I’ve made a serious effort to make it so that any issue is a good jumping on point for new readers. All the information you need is right there. #199 was a fun issue though and a huge challenge!

It’s no easy task to tell a full story in ten two-page spreads!

Care to tell the artists out there about working ‘twice up’ on your pages?

At some point the paper I was using to draw on went bad and I was having a devil of a time finding a suitable replacement. I ended up buying unruled paper from an art store and I thought, hell, since I’m ruling my own paper already—why not try drawing at a size creators used to draw on before the paper size changed in the mid-’60s?

So, I gave it a try and just fell in love with working at that larger size. Technically, I’m drawing a bit larger than they did because the old comics didn’t have a full bleed—the drawings didn’t extend to the edge of the printed page and I added a bleed to the boards I’m drawing on. The paper I use is 16 X 24. The interior box is 12.5 X 18.75 with bleed it’s 14.5 X 22. The end result is much tighter, more detailed art.

With Malcolm taking the reins from his Dad and with Dragon escaping from prison, does the mantle of the title go back to him?

Nope. It’s Malcolm’s book. His dad may have occasional adventures from time to time but the baton has been passed. On a practical level—the book is set in real time and Dragon is over 50— it just doesn’t make a lot of sense after a point that he keeps battling on month after month. There’s a reason boxers retire when they get to a certain age. Now that Dragon no longer has superpowers it makes even more sense that he be put out to pasture.

One thing I always appreciated was that the book happens nearly in ‘real time’. Among your many innovations, can you take credit for that concept or had you seen another creator do that before? Most Marvel books work on a timey-wimey model that keeps characters about the same age, even 50 years later!

Marvel started off that way in the ‘60s—Reed and Sue got married and had a kid, Peter Parker graduated from high school and went on to college. But they quickly realized that if that continued that they would be killing the golden goose.

Certainly it’s been done in the newspaper strips with Gasoline Alley and For Better or For Worse but if it’s been done in comic book I don’t remember it. I do like what it does—it forces me to be creative and to keep things moving.

Plus, unlike corporate comics, I can count on the guy making this book to create new characters! If you’re Marvel or DC you can’t bank on a creator giving them another Superman or Spider-Man.

Malcolm’s relationship with Maxine is going places (and places). What new challenges is Malcolm now faced with and can he handle it? Homework, hormones, girlfriend, super bads!

Tune in and find out for yourself. The beauty of it all is that nothing is static. It’s all subject to change. Maxine moves in with Malcolm in #200 and what follows is like nothing we’ve seen before.

Thanks for giving us a 100-Page Super Spectacular! Even DC Comics has turned their back on this format — unless you count the annuals. But I digress!

I do love them! They’re expensive to produce. Adding a spine to a comic comes with a sizable price tag but I just love the format! I can’t help myself!

There are some awesome backups and even a Jack Kirby / Erik Larsen Cover! This is of course paired with a WWII Dragon story with classic artist Herb Trimpe! How fun was it to write Dragon in a ‘Bucky & Cap’ story? 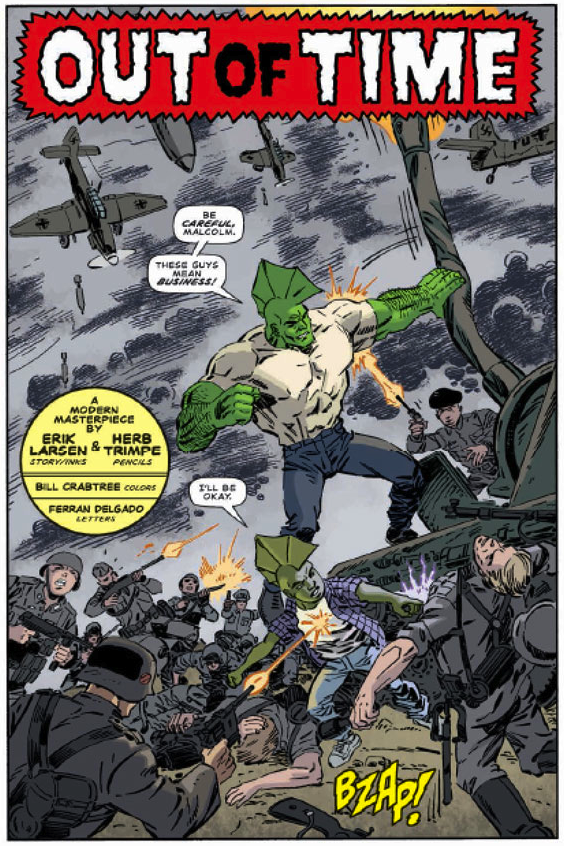 It’s not exactly that kind of adventure but it was a lot of fun nevertheless and working with Herb Trimpe was terrific! He’s one hell of a storyteller.

—and then you take a ride with Mr. Glum & Angel, drawn by Chris Burnham to Dimension X. Is it your mission single-handedly to make comics fun again? All of the backups are so great.

Thanks! Chris was a joy to work with. It was just great to see it all come together. 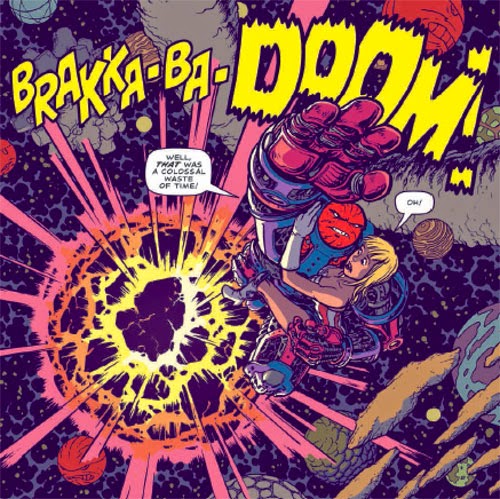 Lastly — and I mean this with most sincerity! Savage Dragon has grown, Image Comics is a powerhouse. You may get sick of people asking but is this what you imagined or dreamed about as a kid? 200 issues aside, you were part of a revolution and it looks like the rebels won!

And I’m okay with that. It’s nice to have been a part of it all. It’s something to be proud of, truly.

What’s next for Dragon in the next 200? Congratulations are in order sir, we wish you and yours the best!

The book chronicles the lives of this cast of characters and month by month we get to see characters age, grow and change. They all have dreams and goals. Some get to go where they want to go and others go off in all kinds of crazy directions! 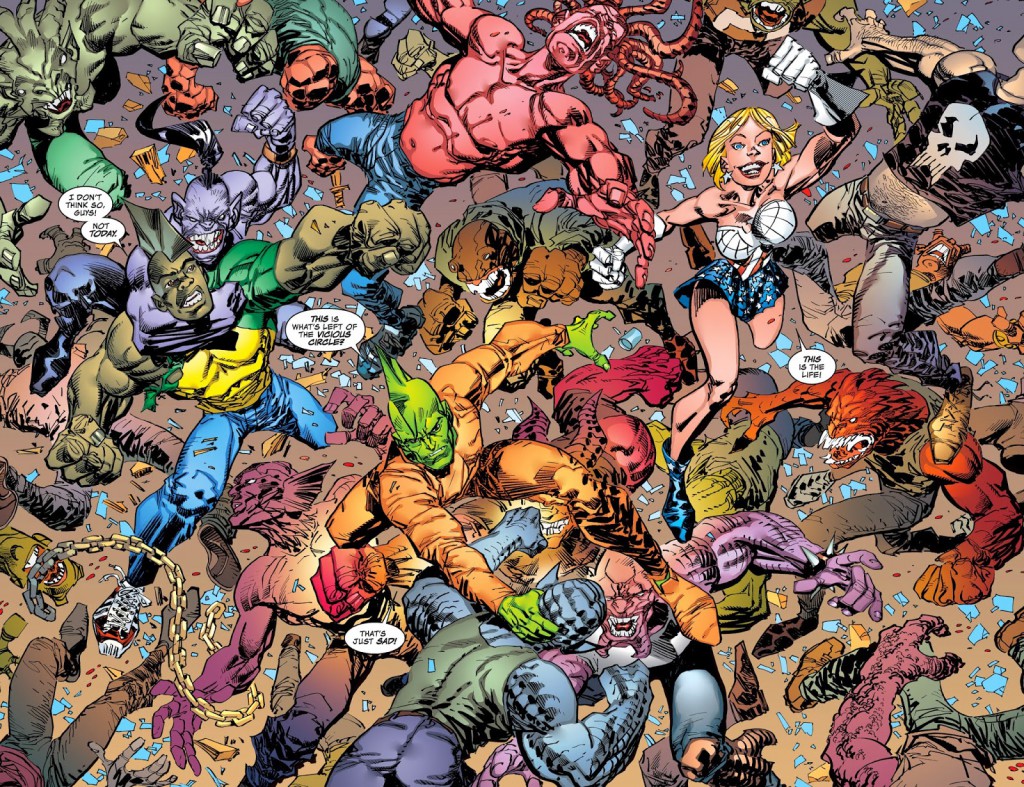 I certainly don’t want to spoil anything for anybody but there’s plenty more to come. After 200 issues it still feels fresh to me. It still feels new.

I have a lot of stories left to tell and I can’t wait to get to the drawing board every morning! 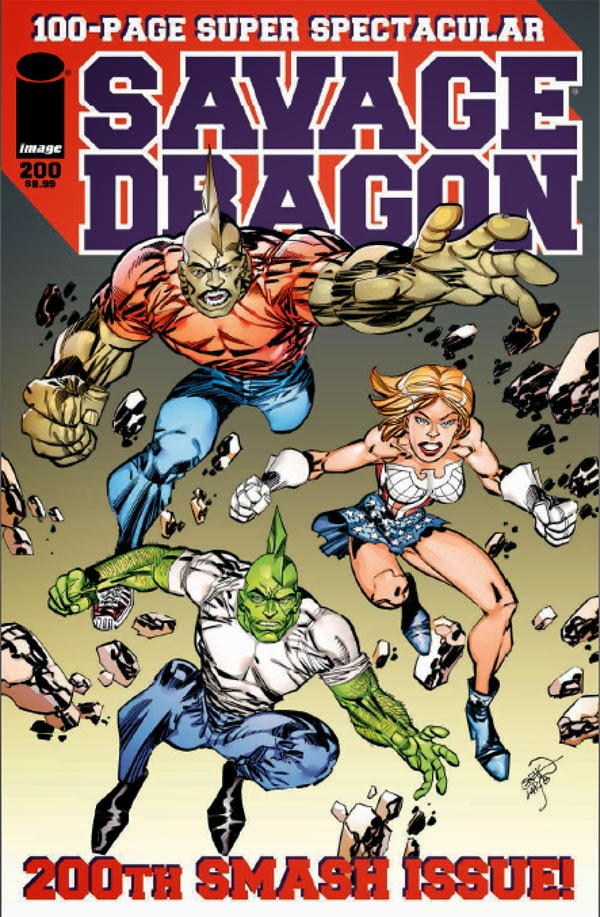