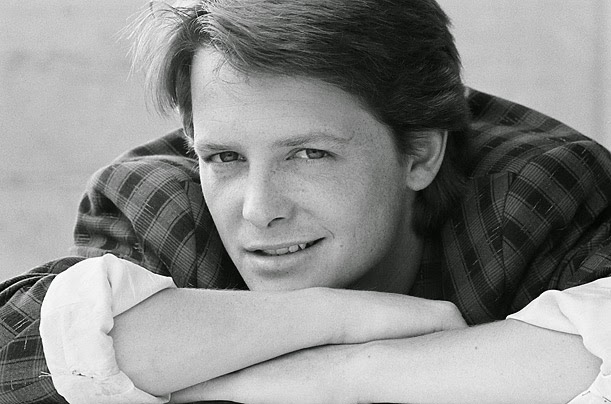 I’m a die-hard bleeding heart liberal who fell in love with a Reganomics-loving conservative named Alex P. Keaton (Michael J. Fox) and I’m not afraid to admit it, and, although our love was completely one-sided (me) and lasted only 30-minutes a week for six years during the early-to-late 80s , I truly believe that it molded me into the woman I am today…a commie-pinko liberal who still crushes hard on dudes who are morally objectionable to my soul.

See, in 1982 when my generation was evolving into actual human beings (I consider that to be around 9 years old when you can start to see through the bullshit that your parents have been spreading out for you- i.e.- Santa, the Tooth Fairy, the Easter Bunny, etc.) and the world as we know it was heading thickly into WWIII with Russia (as well as a high unemployment rate, high inflation, the S&L scandals and other social catastrophes that made young people say “Fuck It, I’m just going to play Atari until we all blow up”) a comforting TV Show called Family Ties was put on the air that pitted Hippie parents, Steven and Elyse Keaton (Michael Gross and Meredith Baxter), against their Conservative son Alex and consumer whore daughter Mallory (Justine Bateman)…and other daughter Jennifer (Tina Yothers) (but really, no one gave a shit about Jennifer so let’s eliminate her from our collective memory…come to think of it, no one cared about their youngest son Andrew (Brian Bonsall) either). I say comforting because, for a lot of us, our parents were those former Hippies trying desperately to hold on to the values that they held so dear while battling the tide of seductive 80s conservatism that promised a better world if you only gave into supporting the very rich. 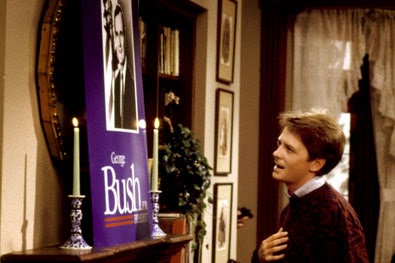 This dichotomy of evolving values and social mores may have played out weekly on TV for our amusement, with Steven and Elyse fighting the good fight (albeit in a nice expensive home) while their offspring enjoyed the co-opting of their youth by a Capitalistic America which taught them that Greed Is Good…and wholly embodied by one Alex P. Keaton, the poster boy for the compassionate conservative movement who stood for everything that his parents (and I) hated, but it also marked a turning point in what I would find sexually attractive once puberty struck.

The idea that I could be attracted to a man who stood for the things that I loathed horrified me to my core. I mean, I was raised on a kumbaya level of parenting, complete with Montessori schooling and a healthy dose of Bob Dylan and Joan Baez, so how could I find myself insanely drawn to this:

And it wasn’t just that I “liked” Alex P. Keaton, it was that I “needed” him in ways that the prose of 50 Shades of Grey only wished it could capture (you know, if it were written with any level of decency at all). Dreams in which Alex schooled me in the finer points of stock market trading made for scintillating masturbatory fodder once the down-low tickle kicked in, followed shortly thereafter by rougher images of Nixon and Regan masks smooshed together, moist from perspiration and various bodily fluids…it was all a bit much to tell you the truth.

The strangeness of this obsession of mine would only make sense years later after dating a multitude of Alex P. Keaton-like men who fell short of the fantasy (as they all do in real life) because, and let’s be honest here, even in Alex’s most disgusting Republican moments he still had his parent’s DNA in him…as well as their ideals, and that tempered him. 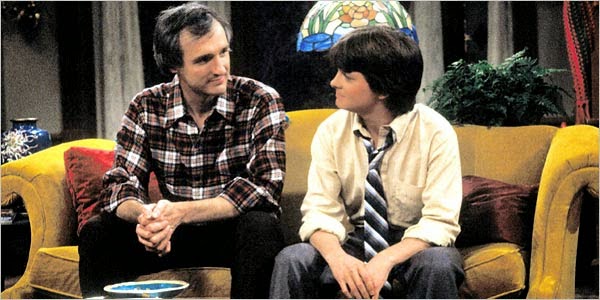 As hard as he fought against the Liberalism of his parents, it still found it’s way in, like water cutting through rock.

You saw it in the heartfelt moments with his Uncle Ned (Tom Hanks):

Or when he wanted to impress a girl (Ellen, played by Tracy Pollan) by engaging in what she liked, not what he wanted her to like:

Or when he realized he absolutely loved Ellen, the one woman who saw into that part of himself that he wanted to keep secret, even from himself:

Yes, politically he was the worst of what made up the 80s, but he was also formed by the best of what came out of the 60s and in this weird, climactic inner showdown, Alex P. Keaton totally and completely did it for me. 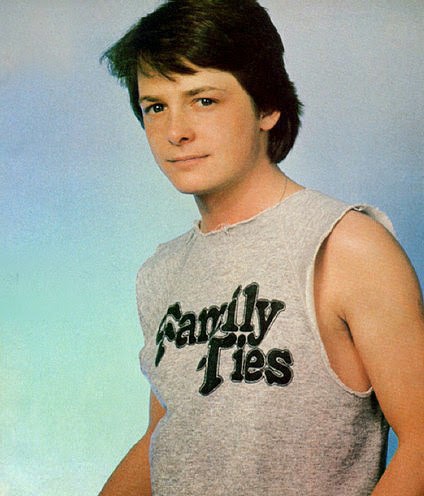 And even though I may have ended up marrying a fellow liberal who eschews conservatism, doesn’t eat or use products with Palm Oil (it contributes to the destruction of Orangutang’s habitat) and refuses to make friends with people who don’t vote Democrat/Independent, I still, late at night, when he’s asleep, crank up Billy Vera and the Beaters’ At This Moment on my iPod headphones and engage in cardinal lust for a guy that probably would have ended up In George W. Bush’s inner circle had he been real.