The directing duo The Russo Brothers have confirmed during an interview in China that they’re indeed bringing back Black Widow for Captain America: Civil War revealing Scarlett Johansson is a part of the cast. An aspect that had yet to be made official by either Marvel or the actress.

I had some concerns that Scarlett Johansson’s participation as the lead in Rupert Sanders’ Ghost In The Shell could conflict with her taking a role in Civil War. However, this was cleared-up when the release date for Shell was confirmed by Disney for April 2017 giving the actress plenty of time to do both movies. Luckily, both projects are under the Disney umbrella which is likely the reason it’s worked-out for Scarlett.

As it stands the cast officially includes Chris Evans, Robert Downey Jr., Chadwick Boseman, Sebastian Stan, Scarlett Johansson and Daniel Bruhl in a mysterious role. The assumption being that Daniel could be playing a villain the film which could be Baron Zemo, Baron Mordo or someone else entirely.  Actor Anthony Mackie, revealed on a Chicago radio show, that he’ll be back again as the Falcon in the film and went so far as to reveal filming locations including Berlin, Puerto Rico and Atlanta.

Check out the interview with the Russo Brothers below.

If you didn’t already know Marvel and Chris Evans are huge in China and the country I’m sure is dying to see more of Captain America.

China’s film market has been boosting many films international box office recently, mainly due to the country opening-up theatres to show more western films than previously. It’s a market you’ll be seeing studios leaning towards setting-up more promotional events and even could reflect a greater representation in the films.

Marvel actually partnered with a Chinese film company for Iron Man 3 which had a Chinese cut of the film that included scenes Western audiences never saw.

Chris is also currently the face of Activision’s promotional campaign for their China-only game Call of Duty Online. Evans taking the role of the “Hollywood action hero” in the game’s very funny live-action trailer.

Badass Digest was the first to suggest her return, while people like myself were a bit concerned she might not make it out of Avengers: Age of Ultron
alive. We know in The Ultimates comic line Natasha does die and her fate
could be paralleled in the films as well. It’s looking like she’ll be
around for a little longer and we’re happy to see that since Marvel has a
limited amount of female badasses at the moment.

Digest also stated that Cap’s lineup of his team is said to include War Machine, Quicksilver, Scarlet Witch and The Vision, Falcon and Black Widow. That’s not leaving too many people signing-up to side with Stark in this conflict.

I’ll be curious to see if Captain Marvel is also a part of the film since it’s been suggested she could be on Team Cap at the end of Age of Ultron.

I have my own sneaking suspicions that Ant-Man and Wasp will also be in the film, and could be apart of Team Stark since he doesn’t seem to have really anyone and his side at the moment. 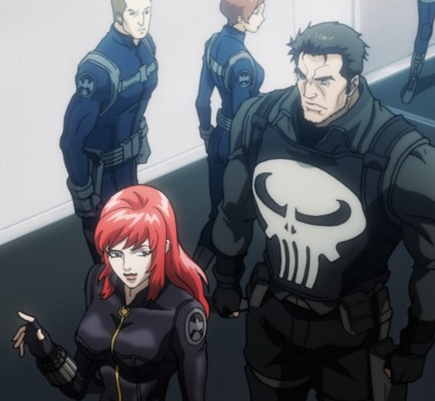 Fans disappointed that Black Widow wasn’t getting her solo movie should take solace that she’ll likely have her origins and solo adventures explored in most of the films she’ll be a part of as a supporting character.

An incarnation of a Black Widow film did exist at one time with X-Men and Watchmen writer David Hayter set to write and direct the feature.

David even named his daughter after Natasha when she was born during it’s development.

This was way before Emily Blunt and Scarlett Johansson were in the mix for the role.

Marvel would partner with Lionsgate on the project, who had handled the two Punisher movies. The two characters were eventually paired-up in the animated feature Avengers Confidential: Black Widow and Punisher.

After the disastrous receptions from Fox’s Elektra and Warner Bros’ Catwoman, Lionsgate pumped the breaks and pretty much ditched the project entirely fearing that audiences had completely rejected female superheroes and not that the quality of those films were lacking. 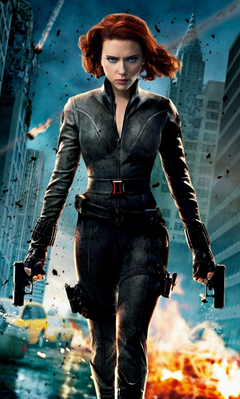 This move would be echoed in Hollywood as many studios slowed-down/halted any superhero movies with female leads. It was only just in 2014 that major studios announced plans to make films like Wonder Woman and Captain Marvel as tentpole features.

Funny, since it’s likely both those films will end-up having budgets twice or triple the size of Hayter’s Widow film which was considered a risky amount of money at the time.

Later on, a writer was tasked to update Hayter’s script that was Guardians of The Galaxy co-writer Nicole Perlman. She’s come out and said that her contributions were years ago, and had really nothing to the do with the project currently. I have to assume this was likely around the time of Iron Man 2 and the shooting of Avengers, since there was a lot of talk of developing a spin-off around that time.

Kevin Feige, has suggested Marvel currently doesn’t have plans to pursue a film focusing on the character but she is integral as a supporting member of the cast for the Phase Three lineup which will be launched by Civil War.

It’s possible that the Black Widow film and it’s concepts have been folded into Age of Ultron and Civil War. As Marvel has done this previously with their in-development Nick Fury movie which the studio had been considering on making post-Iron Man.

Instead, elements of that film which was basically a cinematic take of the comic Nick Fury Vs S.H.I.E.L.D.  was combined with Ed Brubaker’s Winter Soldier comics for the Captain America sequel. The Nick Fury film essentially has vanished and will likely not be happening any time soon. We could see the material from a Black Widow film used to bulk-up other Marvel films which might be the reason behind Kevin Feige’s statements hinting she is more useful as a supporting character.

In the two trailers for Age of Ultron we clearly see some flashbacks to Natasha’s Russian past, with a shot of her being experimented-on and hints to her past as a ballerina.

Are you excited for more Black Widow?