Imagine a land where a ragtag group of heroes with miss-matched powers are thrown together to avenge and seek justice.

Let’s back up a few steps here.

Image Comics delivers Secret Identities #1 in February, and we’ve assembled our own globe trotting squad — the talented creative team for one of those awkward roundtable conferences with our masks still on! 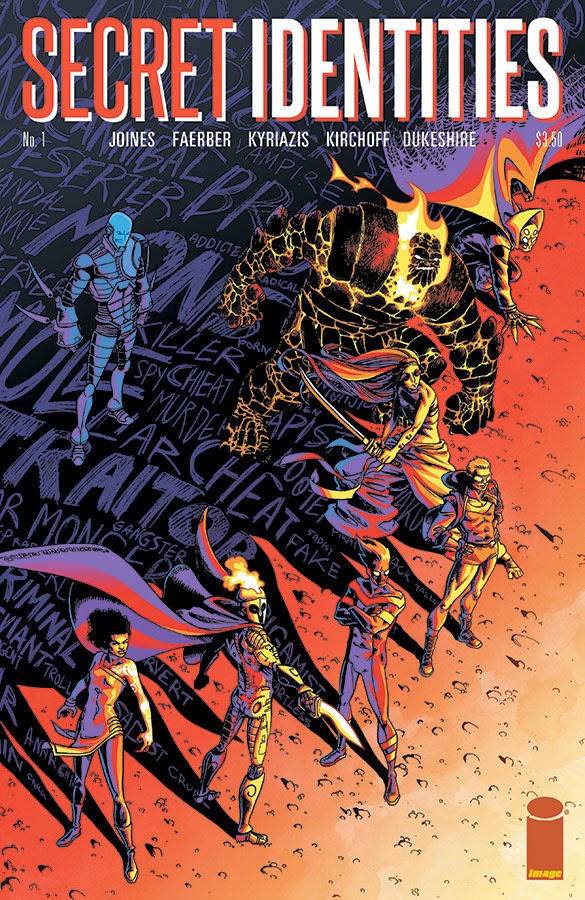 Writers Brian Joines (Imagine Agents) and Jay Faerber (Copperhead, Graveyard Shift, Gemini) are joined by artist Ilias Kyriazis to give us the skinny on your favorite new superhero team that is almost ready to implode!

FOG!: Thank you guys for joining us to talk Secret Identities #1! I’m a sucker for a good team book — what sets this one apart?

Jay Faerber: A couple things. For one thing, this is a creator-owned book where literally ANYTHING can happen. We don’t have to put the characters back the way we found them. We don’t have to make sure so-and-so is back in costume in time for his big movie.

If you like super-hero books but are tired of the repetition at Marvel and DC, this is the book for you. 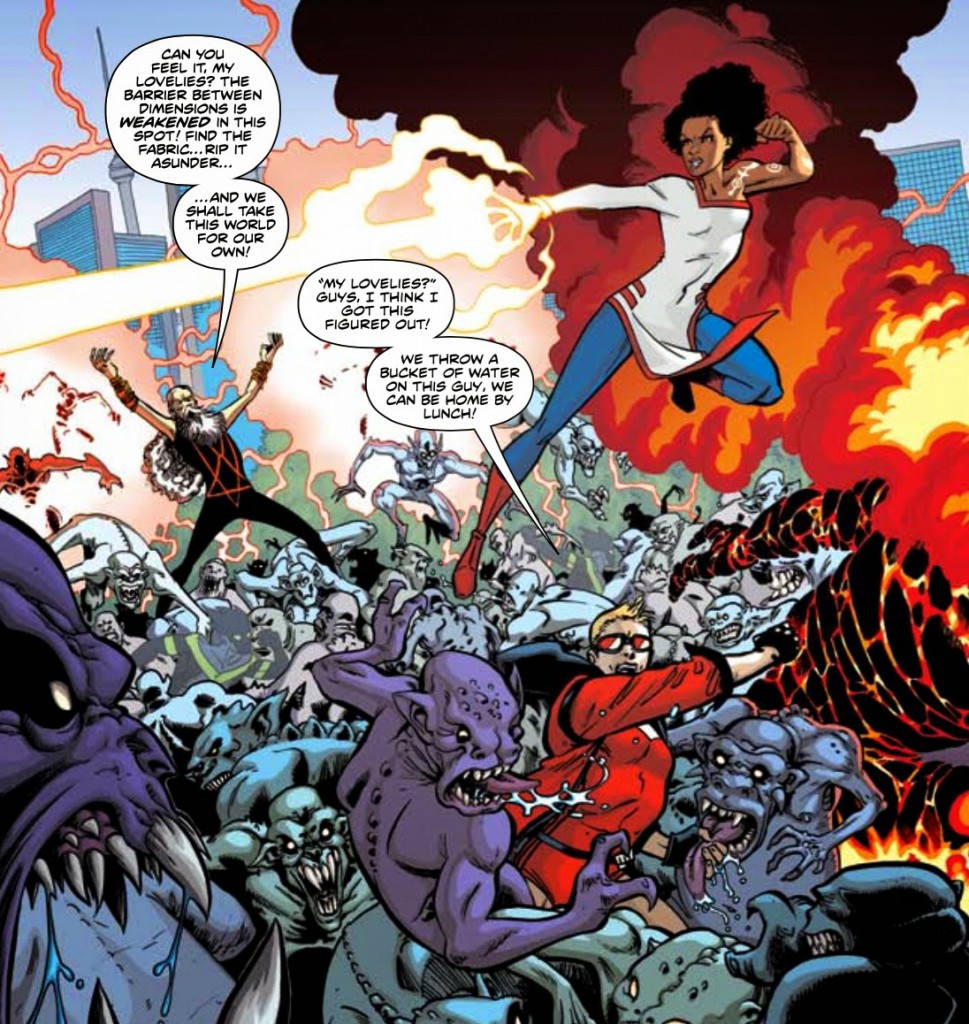 But also, it’s a different approach to a team book. The reader knows very early in issue #1 that the Front Line’s newest member is a mole who intends to destroy the team from within. While we’ve seen traitor storylines play out in other books over the years, I don’t think we’ve seen one like this.

Brian Joines: Yeah, there’s a big difference between seeing characters deal with external forces coming at them and watching them selectively poked and prodded and torn apart from the inside.  Plus, watching the steps the mole has to go through to maintain his cover is part of the fun.  When you’re surrounded by geniuses, detectives, and ninjas, you might have to take some pretty dire moves to keep from being found out.

And like Jay said, these are our characters, beholden only to us.  Their actions can have serious consequences that change things permanently, without worrying about licensing deals for shampoo or juice boxes. 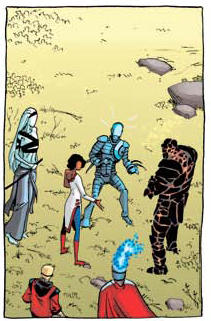 The Front Line is a great name for the team. Is there a secret origin to the name?

Ilias Kyriazis: Let me tell you it took us a while to settle on that. For the longest time the team was called “The Paladins”, a name none of us really liked. “The Response” was another possibility if I recall correctly…

JF: Yeah, we struggled a LOT with finding the right name for the team. And Ilias is right — it came very close to being “The Paladins”.

BJ: The only regret I have about losing that name was the joke one of the characters made about “Not putting the ‘pal’ in Paladins.”  But I’ve moved on.

You guys have your own super-team of creators on the book. Who sees the ideas first and who has the final say on the scripts? Or is it way more collaborative?

IK: Very often Jay and Brian’s scripts leave me room to play. Most of the scenes will be in full script but others will be in Marvel Method. If I have an idea about the story I feel free to suggest it and that’s great. We have a very good working relationship, a lot of mutual trust, and that’s the best way to make cool comics.

JF: The general ideas come out of me and Brian generally, at the story stage. But Ilias has generated his own, too. The concept for the Luminary character came from him, for instance, and in exploring her origin we ended up using ideas he suggested. So in that sense, the story generated with him, although we fleshed it out and structured it. And no one really has “final” say. It’s a collaboration. No one can really pull rank on anyone else. If there’s a difference of opinion, we work it out. 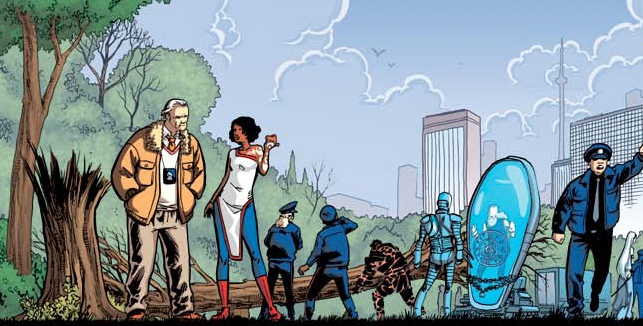 BJ: I think the standard operating procedure for this book is one of us brings a character or concept to the table…maybe we have more information on what we want to do with the character or story, maybe we don’t…and then we bounce ideas and concepts and designs around until we get to what’s on the page.  I can’t think of any major characters that one of us doesn’t at least have a fingerprint on when they got to the final stage.

Right off the bat, we have heroes coming and going, and of course a big rock err-Lava guy (Vesuvius)! The varied balance of powers, personalities and combat skills are what makes it. It seems like these guys don’t always get along! Will the tension build beyond the battlefield?

IK:  you know how some super-teams are like a family? Well, not this one! …not at first at least.

JF: Yeah, it was important to us to come up with a group of characters with really stark, varied personalities and backgrounds. So there’s definitely going to be tension there throughout.

BJ: My favorite super-teams tend to be the ones made up of mismatched heroes who get kind of thrown together, who wouldn’t necessarily have found each other organically but are thrown together by circumstance and decide to make a go of it.  So I loved that our team had its foundation in that…and all the dysfunction that comes with it.

Some of these heroes are hiding multiple layers of secrets from their families, friends and loved ones. Are the wheels going to start falling off that cart?

JF: Absolutely. Some sooner than others. It’ll be fun watching the characters try to hold onto their various secrets, even as Crosswind is specifically trying to uncover them.

BJ: Yeah, it’s going to get ugly for a few of the team.  The question is will they be able to rise above it or is their baggage going to drag them to the bottom?

I liked that you spent time introducing each character. Pretty tough to do in just one issue! What can we expect in issue #2? Is this an ongoing or limited series? 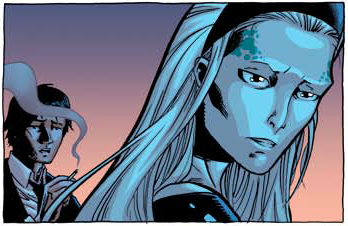 JF: It’s an ongoing series. Issue #2 focuses a lot on Gaijin, and just how she balances her role as a super-hero with the fact that her family are a bunch of Japanese mobsters. That’s a pretty big secret to keep from your teammates.

BJ: Like Jay said, it’s an ongoing, but the nature of the story means there’s definitely an expiration date down the road…a natural end to it all.  But we have a long ways to go before we get there and, in the interim, we’ll be taking the time to get to know our characters better, without having seven other voices competing for space.

Luminary is the daughter of the U.S. President but the team resides in Canada in one of the coolest headquarters I’ve seen in a while. Will the Front Line be caught in a tug of war with our neighbors to the North? I can’t help but think of a little team called Alpha Flight!

IK: I love the team’s HQ! If we didn’t want them to go and have adventures I’d be happy to draw it all the time. My main inspiration for it is H.R.Giger meets Fraggle Rock. 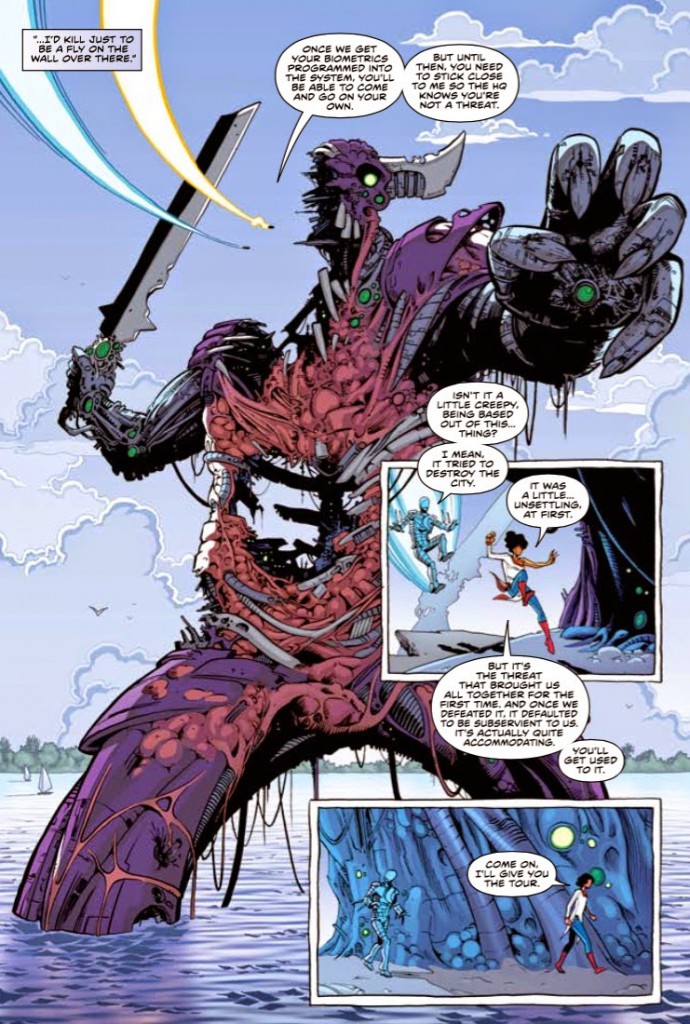 JF: Brian and I are both big Alpha Flight fans, but as you yourself noted — the Front Line’s leader is American. So they’re not strictly a Canadian team. It’s more of a melting pot. And yes, there is a bit of a political tug of war going on. That’s something we’ll continue to see unfold…

BJ: Exactly.  We’re still getting to know the cast right now, but seeds were planted in issue 1 showing some unhappiness on the part of the U.S. … wonder what that would look like if they ever decided to do something about it…

Crosswind has something up his sleeve, but do we think the heroes might catch on and see what his game is? After all, these are the world’s best and smartest! 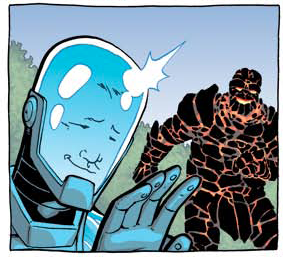 IK: I don’t think I should be giving interviews… it’s too hard for me to shut my mouth and NOT give away Crosswind’s secrets!

Anyway I’ll just say this: there’s reason for EVERY detail in his costume. *WINK WINK*

JF: Sure, they might catch on. But then again, they might not. And if Crosswind thinks they’re about to catch on, what steps might he take to ensure that they don’t? As we’ll see, he’s not a very nice guy.

BJ: Any of these characters, with their backs against the wall, may go down roads that surprise you.  And moments of absolute frank honestly should be some of the scariest in the book!

Lastly — and everyone can pick their favorite — which hero of the Front Line is most likely to be a finalist on American Idol and why?

IK: No contest! Gaijin could even give Diva Plavalaguna a run for her money. No human voice could come close.

JF: I pride myself on never having seen a single second of that show. But if you put a gun to my head, I’d say Luminary. She’s the President’s daughter, after all. Even if she can’t sing, everyone loves a celebrity.

BJ: I gotta go with Rundown, if only because he could use his speed to handle even the trickiest of wordplay in songs.  You could give him two mics and he’d alternate between “One Week” on one and “Alphabet Aerobics” on the other.

I think I would pick The Recluse as the underdog with “My Heart Will Go On”.

BJ: I suspect that pick would be your last.