The first of these is Creature Cops: Special Varmint Unit by Rob Anderson. 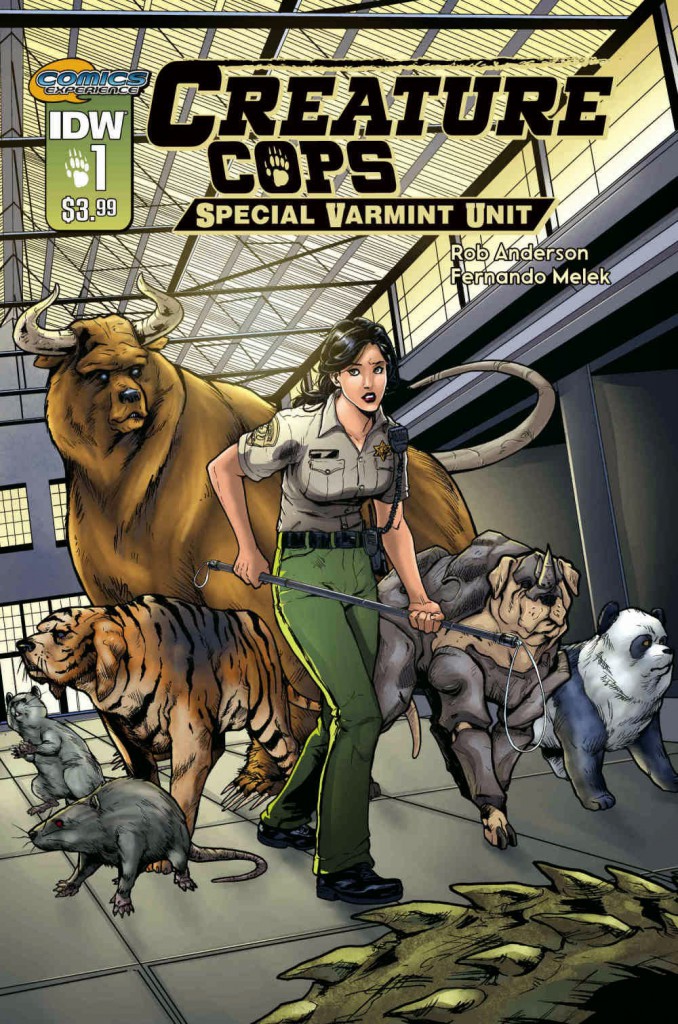 Rob joins us today to talk about the hybrid critters in the book and the cops that wrangle with them! 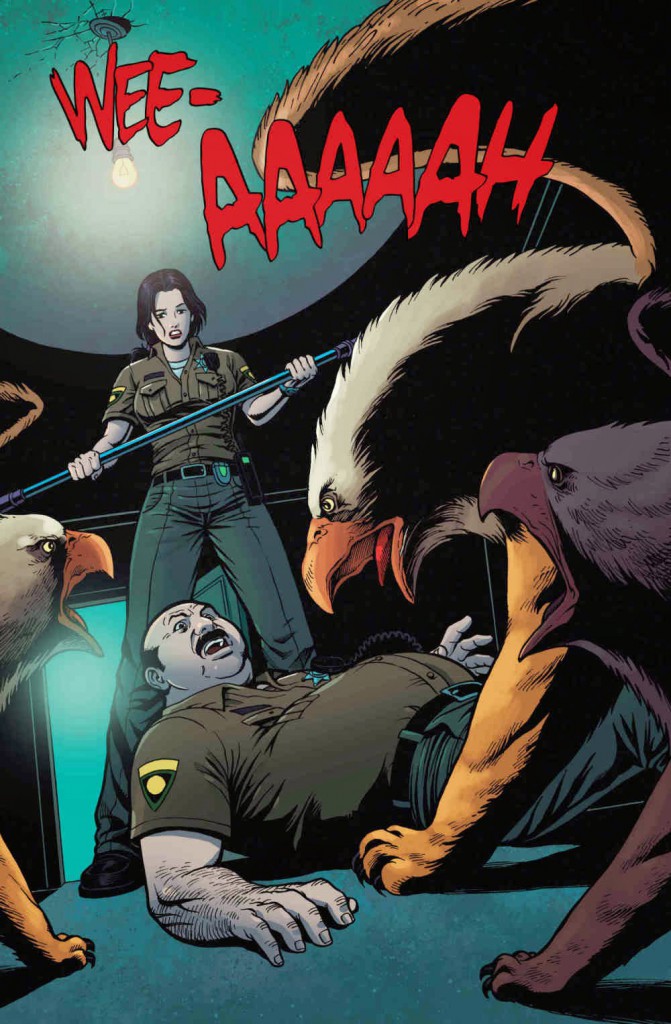 FOG!: Rob, thanks for joining us! Tell us about Comics Experience & IDW’s publishing collaboration, Creature Cops! Are you the first book?

Rob Anderson: Creature Cops is, indeed, the first book coming out of the recently announced publishing alliance between IDW and Comics Experience. I’m pretty excited to be first out of the gate.

Creature Cops: Special Varmint Unit is about animal control officers in a near-future world similar to our own, where gene-spliced animals are commonplace.

It’s an ensemble-style police drama, where the animal cops just happen to be dealing with panda dogs, gator-snakes…and griffins!

Comics Experience is an educational company and runs an online community for comic book creators called the Creators Workshop.

I developed Creature Cops in CE courses and the Workshop, and all the creator-owned books IDW/CE will be published are coming out of that “talent incubator” (as CE founder Andy Schmidt likes to call it).

From the looks of it, we chomped at Rex The Zombie Killer way back in 2013. Do you spend a lot of time thinking about animals?  What makes animal better heroes?

I’m just a self-confessed “animal nut”. I love animals and animal stories, from WE3 in comics to Watership Down in novels and beyond. Even though animal control officers get most of the spotlight in Creature Cops, we do have some significant animal heroes, from a mischievous stray panda dog to a Horned Mastiff.

So what makes them better heroes? In terms of storytelling, I think animals as protagonists give you a chance to look at emotions, life, and everything through an “outsider” view. It can give you a different perspective, while still touching on all the things that matter to humans.

CC:SVU opens like ‘Fort Apache: The Bronx Zoo’. Do I have that right? I don’t have anything else to say, I just needed to slip that in there.

Nice, now I feel like I need to work the Bronx Zoo into a storyline, just to use that. But there is a lot of “cop show/film” DNA in Creature Cops. We’re following all the officers in the precinct, with multiple cases, but a number of the officers will soon be embroiled in a “cold case” from their past that involves a death cult…and a pretty freaky hybrid. 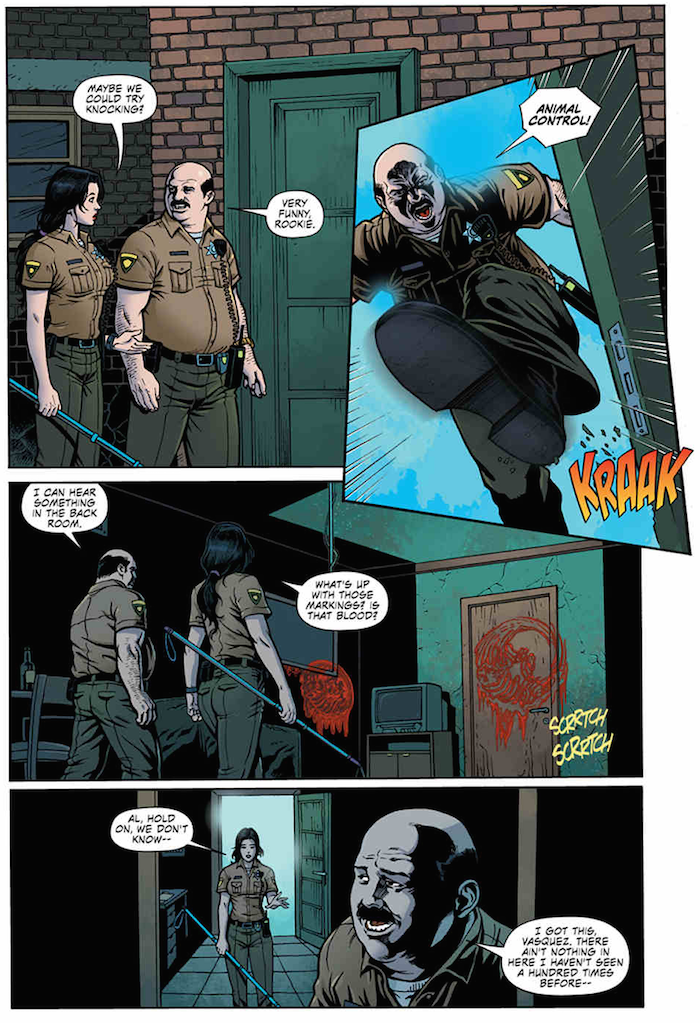 From hoarders to hybrids, the officers have a lot on their plate. Care to set up the world a bit for us?

The big difference between our world and Creature Cops is that about twenty years ago in that world, China announced the creation of the first commercial hybrid, a panda dog. Once they were imported to the U.S., people went crazy for them, standing in long lines just to buy one.

I mean, who wouldn’t want a panda dog, right? 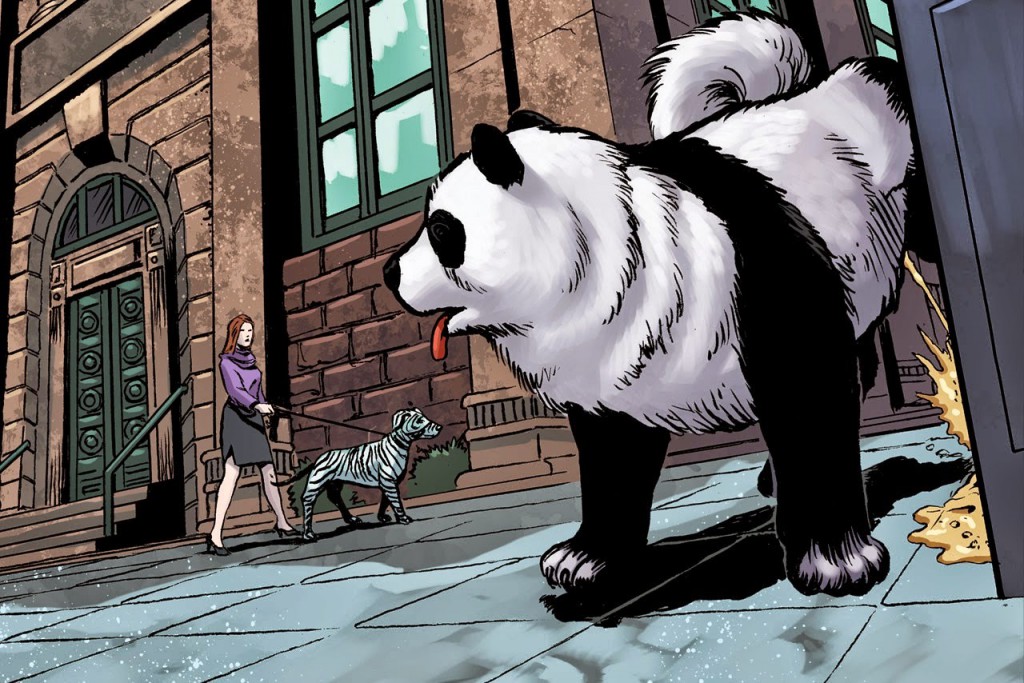 As the commercial, agricultural, and other implications started to be apparent, a “gene war” ensued…and, long story short, the story picks up twenty years later when hybrids are part of everyday life, and the job of animal cops is about 200 times harder, and more dangerous.

Tell us more about the incubation period you had at comics experience and how the story grew out of there. Andy really is doing well with the classes but also the follow up after the classes are over. Did you spend time in the post-class environment?

For those who don’t know, Comics Experience was founded by former Marvel and IDW editor, Andy Schmidt back in 2007, when the courses were still in-person in New York City. I had been wanting to take his courses for a couple years, but I was in Virginia, so when he offered his first online course on comic book writing back in late 2009, I jumped right in it. 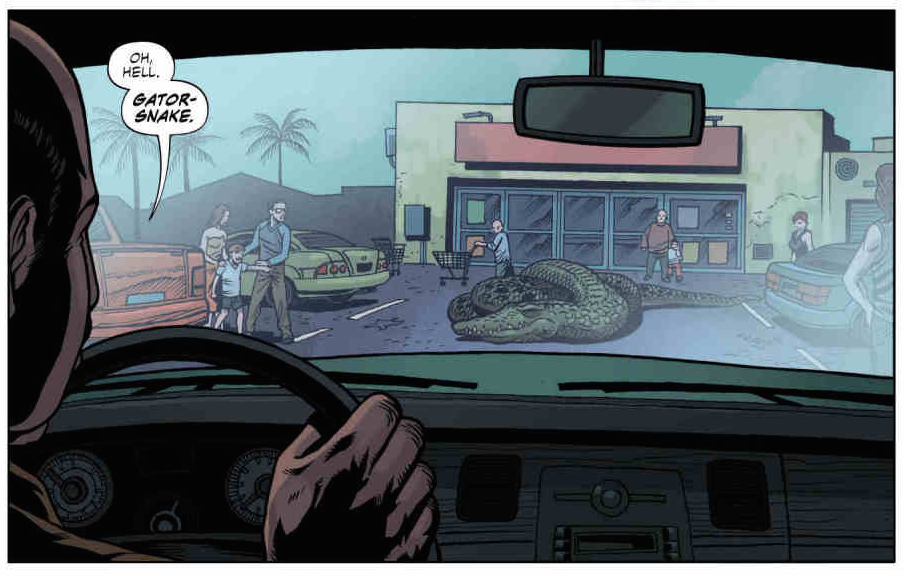 In that first course, you pitch and write a 5-page story, and I wrote one set in the Creature Cops world. (It was called “Animal Control: Special Creatures Unit at that time.) From there, I took his Advanced Comic Book Writing course and developed the full first issue.

Then, yes, I later became part of the post-course Creators Workshop community (which is actually open to anyone, not just CE alums). I workshopped the entire series, posting the scripts and receiving feedback from pros and peers there. As you can imagine, that’s a fantastic learning experience and it only makes the scripts stronger. I’m still a member of the community today as well.

How was feedback from the CE helpful in making the story better?

Wow, it was helpful on every aspect.

After the initial feedback I received, I actually threw the whole first issue out and started over. So there’s that. (ha) Just having fellow writers give their reactions as readers is a great help. But you receive feedback on everything — pacing, character arcs, dialogue, clarity — you name it, I probably received feedback on it from someone. Sometimes you implement the feedback, sometimes a voice inside you says leave something as is, but all the feedback is immensely helpful in making you think about what you’re doing and why.

Where can we catch more of this book? Is it ongoing?


Creature Cops: Special Varmint Unit is a three-issue miniseries. It’ll be coming out monthly, with the first issue hitting stands on 1/28/15. 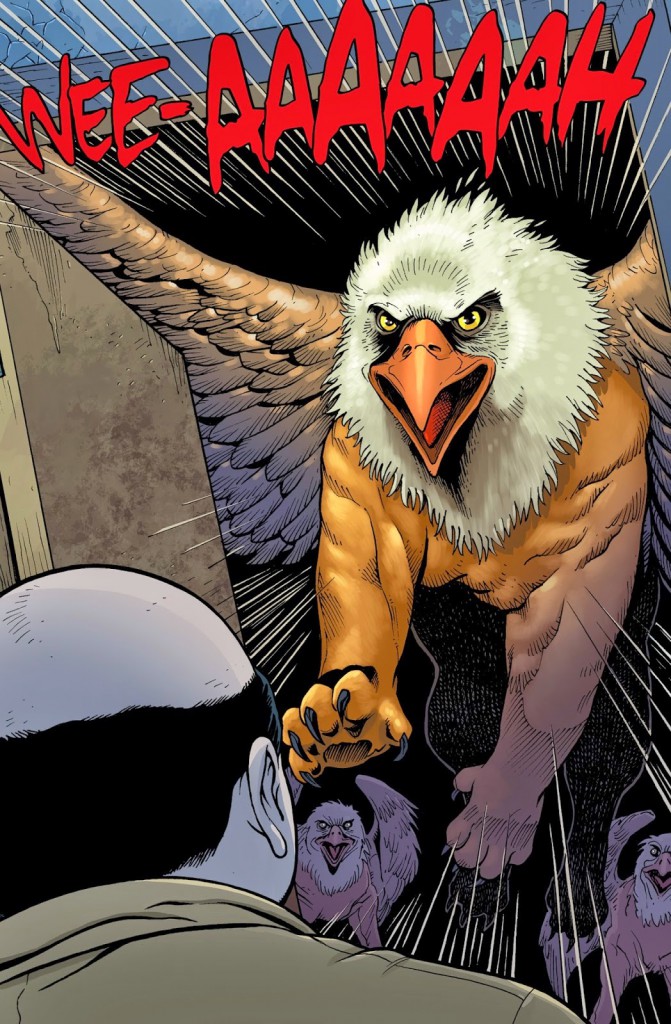 I’d love to continue the story possibly — I certainly have a ton of stories to tell — but CE is starting out with miniseries. It’ll be at your local comic shop, and available digitially on comiXology, via IDW.

Lastly, what’s the laziest pet combo you can think of? Crossing a cat with a sloth might make for some serious slouching about the house.

I’m thinking Koala with a turtle. Turtles move slow. Koalas hardly move at all. But, actually, I’m not sure it would be much lazier than a sloth/cat, based on our own cat. Our cat knows how to relax!

Thanks, Rob! Where can we find you on social media?

You can find me on Twitter at @RobertEAnderson, and Creature Cops is on Facebook at facebook.com/creaturecops. You can also follow Comic Experience @ComicExperience and IDW @idwpublishing

Hope folks are able to check out the book!