Peggy Carter (Hayley Atwell) remains by his side and on the case. This episode gets a little deeper into the mystery behind the stolen Stark weaponry.

Peggy continues to struggle maintaining her cover as a double agent, all the while carrying out mundane tasks of taking the office lunch orders and still being treated as a secretary in the office.

Agent Carter assists Jarvis (James D’Arcy) by ambushing a warehouse deal with mysterious bad guy Mr. Mink’s lackeys. Peggy reluctantly offers Howard her room as a temporary hideout while she retrieves a particular weapon from the S.S.R. lab at his request. 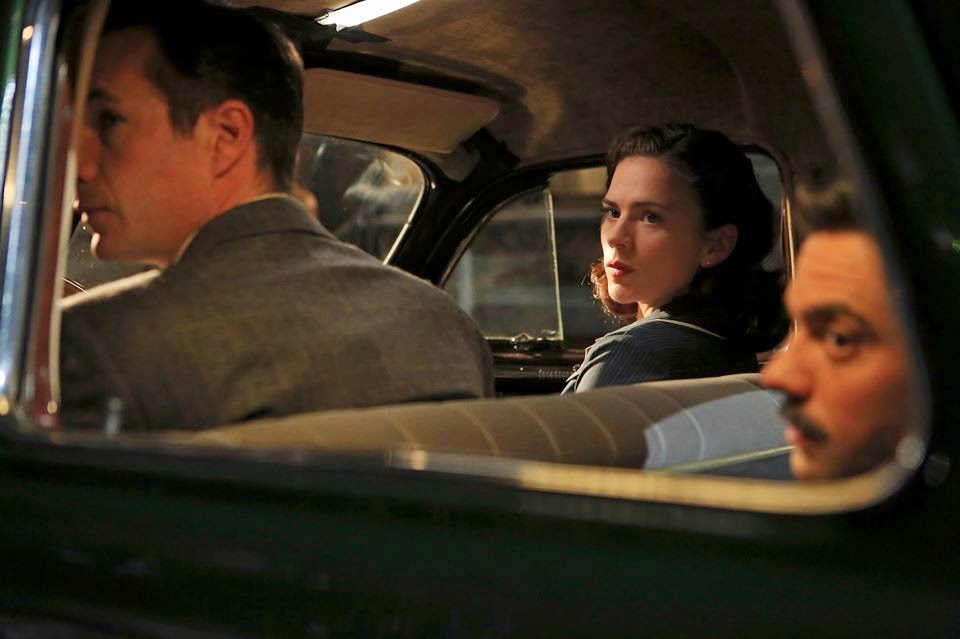 Chief Dooley (Shea Whigham) is off to Germany to follow up on leads tying Nazis into the Stark weapon case, and questions a Nazi on death row. We may be getting a subtle Boardwalk Empire nod here, the Ratzi’s Colonel’s last name is Mueller — the same as Michael Shannon’s false name on the period drama! 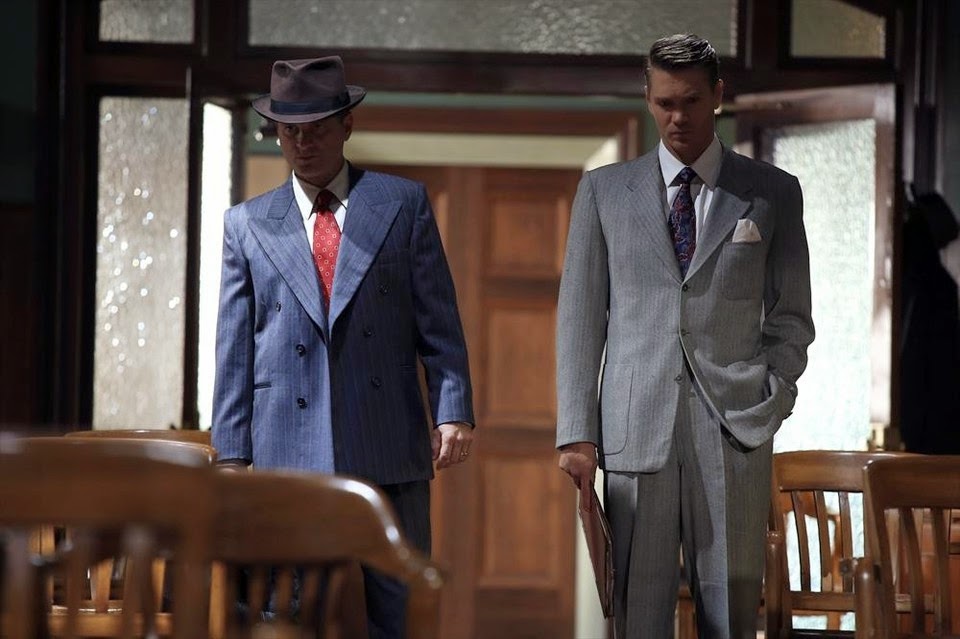 Dooley finds out that the battle in Russia he was researching had already occurred by the time the Nazis had arrived, and that everyone was already dead. He learns later that Howard Stark’s name is on a flight manifest a couple of days after the battle had taken place, deepening the conspiracy even more.

Carter’s desk mate Agent Sousa (Enver Gjokaj) heads down to the docks in the hopes of getting some clues on who called in the stockpile of Stark’s weapons at the end of the last episode. Sousa encounters a couple of vagrants playing a nickel bet card game and suspects that one of them must have seen something. 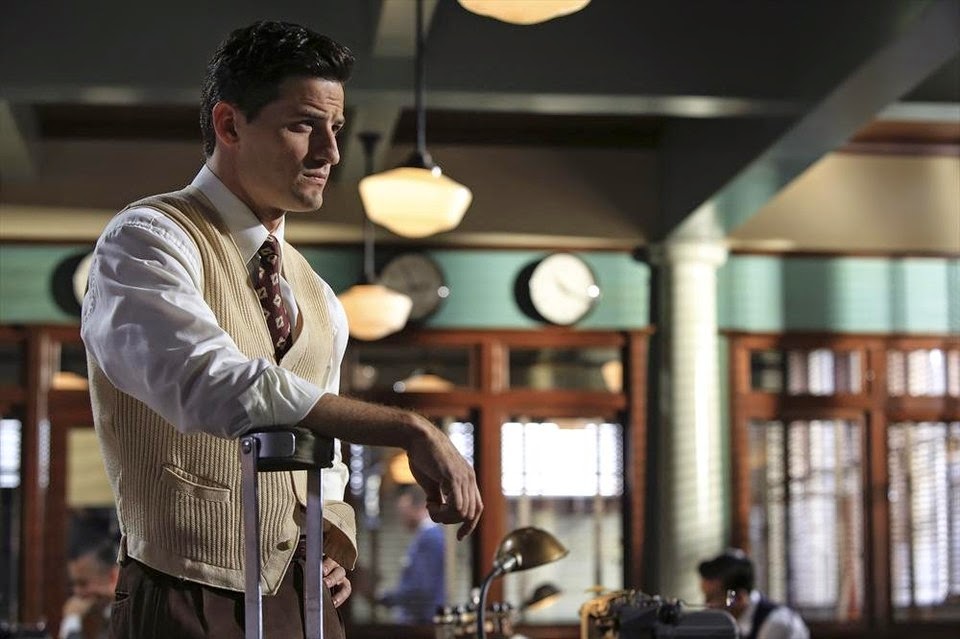 Sousa takes one of these gentlemen in for questioning and learns that two people were seen getting off the boat were a sharply dressed man and a dark haired lady.

Fortunately, Carter is not yet under suspicion, but we can see that she is getting closer and closer to being found out.

While Howard Stark makes himself at home on Peggy’s floor (and in the rooms of several other Griffith Hotel ladies), she retrieves a spherical weapon from the S.S.R. lab and opens it disregarding Howard’s warnings. 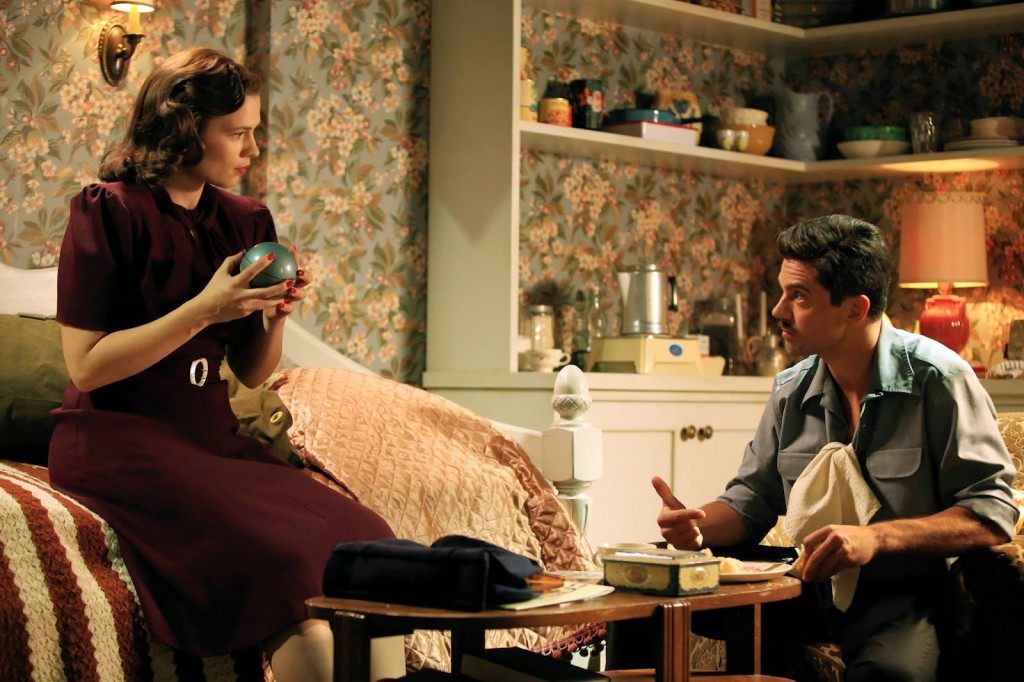 She pulls out a small vial of red liquid and confronts Stark and upon finding out that it’s the blood of her lost beloved Steve Rogers (whom some of you may know as Captain America—his blood contains the unreproducible Super Soldier Serum from Project Rebirth)!

After a heated argument about trusting him, she throws Howard out of her apartment and finds herself out into the world where Stark is still being sought after for treason.

A short while later Otto Mink (Gregory Sporlede) tracks Peggy from the information given by his goons earlier, but encounters the unexpected in her hallway. Tune in to find out what happens when Mink pulls a revolver on unsuspecting ladies in the Griffith Hotel. 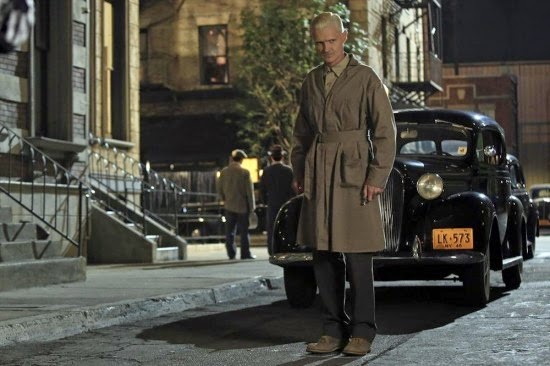 This episode has couple of great surprises (a certain “The Man” cameo among them).

Agent Carter is still going strong in my book of kick-ass spy ladies, and even though this episode was not quite as action heavy as the previous episodes. “The Blitzkrieg Button” carries a lot of solid plot building, studded with social commentary.

I enjoy cheering for Peggy every time she throws back a witty comment, punches someone deserving in the face, conquers a situation with charm and a touch or realism not often encountered in shows today.

This show continues to blow me away, and I will be anxiously awaiting next week’s Episode 5: The Iron Ceiling, next Tuesday night on ABC.