We love it when a campaign comes together! With over $10k raised for friend of the FOG!, Dirk Manning’s new Tales of Mr. Rhee Karmageddon.

Our Hero Mr. Rhee has paranormal abilities and in this volume heads out to protect a family of orphans in what becomes quite an interesting road trip. Demons, monsters and Cthulhu all make an appearance in this post-armageddon world. 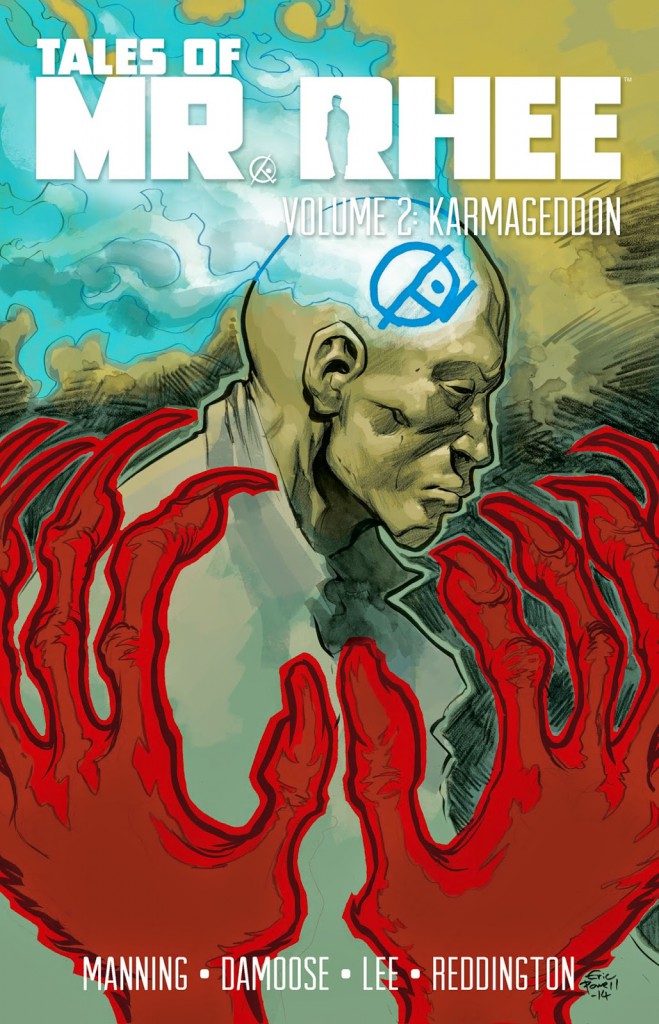 Here’s Dirk to stretch out that origin story and tell us about the rest of his campaign!

FOG!: Dirk! Thanks so much for taking off your mask and revealing yourself to us for Tales of Mr. Rhee: “Karmageddon” in this Kickstarter Korner!

DIRK MANNING: Thanks for having me here, dude! It’s a pleasure!

You see, normally we get ahead of these campaigns, or get in on the ground floor, or the home stretch. You’ve really done it, man. You reached your goal already! How did you do it, man? Mysticism? The occult?

Honestly? I’m blown away by how quickly things have escalated with the Kickstarter for Tales of Mr. Rhee: “Karmageddon.” We hit our funding goal of $6,666 dollars in under eight hours, and as I type this – six days into the campaign – we’re already only a few hundred dollars away from our THIRD stretch goal! What can I say? Horror comic fans are very passionate and very dedicated!

Well, that, and being a devoted acolyte of The Great Cthulhu doesn’t hurt, either. [laughs] 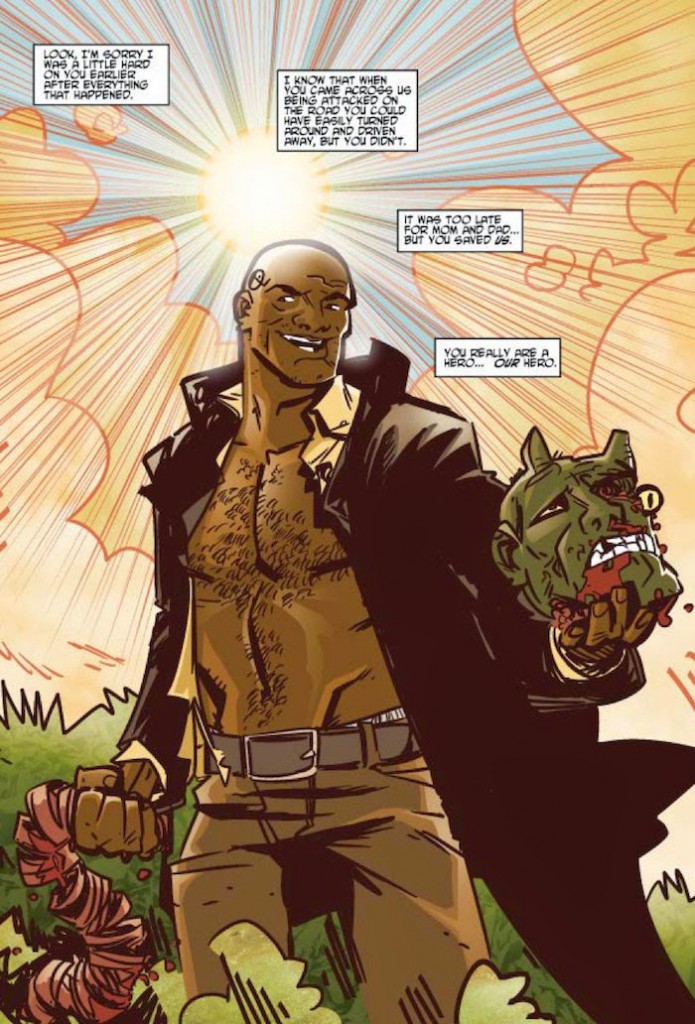 It’s the story of a paranormal trouble-shooter who lives in a world where society has been completely rebuilt after the Armageddon and the Rapture. Everyone wants to believe that things are back to normal and that all the monstrous and demonic invaders are gone, but Mr. Rhee knows better, hence setting-up this very adversarial relationship he has with pretty much everyone he meets… until they need his help, of course. [laughs]

Horror might be the genre here, but these four issues have a lot more going for them than just that. I teased you about the occult but there is a lot of Good vs. Evil vs. Cthulu in “Karmageddon”. How does this book fit in with the other Tales of Mr. Rhee books?

Thanks for noticing that – and bringing that to the attention of everyone else! There’s a lot of horror in Tales of Mr. Rhee – as it is a horror book – but it also has moments of genuine humor, warmth, and the like.

Until Cthulhu arrives, that is. Then everything goes straight to Hell. Literally. [laughs] 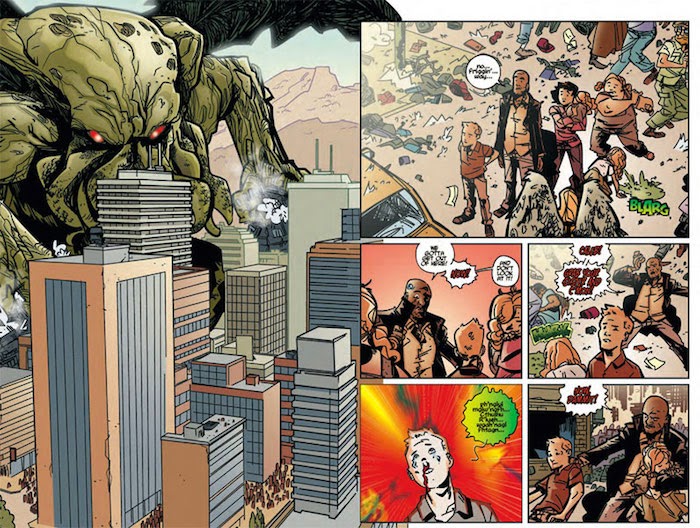 Even though Tales of Mr. Rhee: “Karmageddon” is technically “Volume 2” of the series, the story is largely a prequel to Tales of Mr. Rhee Volume 1: “Procreation of the Wicked.” That being said, you don’t have to have read Volume 1 to enjoy this new story. I actually have a rule that everything I write be completely accessible to new readers, so anyone who thinks this story – about a road-weary magician trying to protect five orphaned siblings during the end of the world – sounds interesting can pick it up and dive right into the series without the need to know anything about Tales of Mr. Rhee… except that they’re in for a great character-driven horror-story, of course! [laughs] 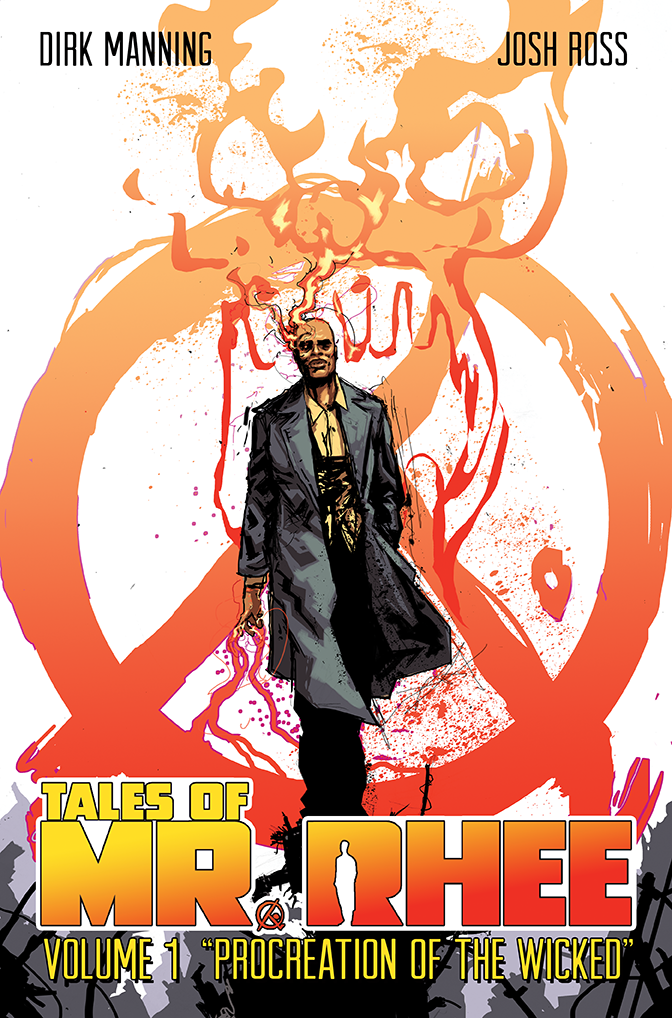 Mr. Rhee plays the role of protector but isn’t able to save everyone. Will this mess him up further down the line?

Oh, absolutely! That’s a great observation – and it’s what really makes him the “harder” and more distant person he is today, as seen in Tales of Mr. Rhee: “Procreation” and next year’s upcoming Tales of Mr. Rhee Volume 3… for starters.

I like how you structured your initial rewards…now that you hit the funding, tell us what we can expect from the stretch goals.

I really take a lot of pride in trying to give everyone as much bang for their buck as possible in everything I do, and I’m really hoping that, when this campaign is done, we’ll be shipping everyone a huge box of stuff! [laughs] 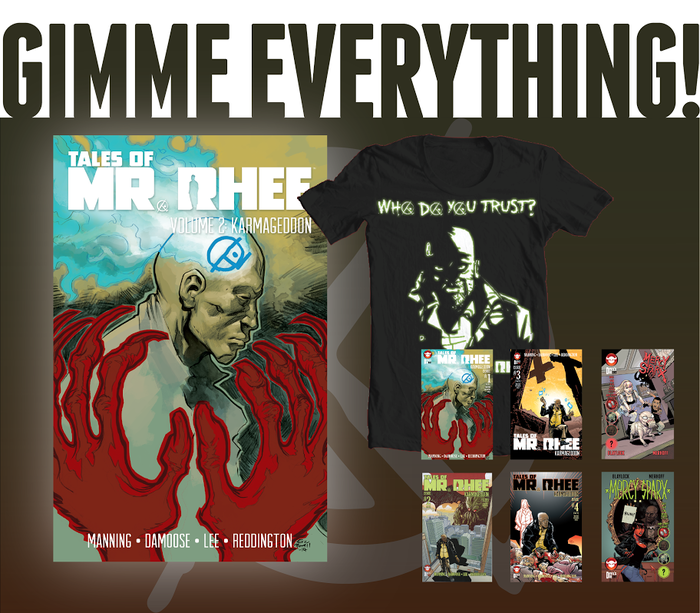 What is your relationship to Devil’s Due for this book and in general? Are they the prime publisher for Tales of Mr. Rhee? Do you retain the rights?

I originally published Tales of Mr. Rhee as an online comic on my own website, and we then re-syndicated it for the Image Comics/Shadowline online comic site after that.

When it came time for me to focus on taking the series to print, I looking for a publisher who would support – and promote – me as a creator and let me take the approach I wanted to take with the series in regards to launching exclusive versions of the work (and other Limited Edition items, such as Glow-in-the-Dark T-shirts) through Kickstarter while also releasing “standard” versions of the book through comic shops across the country.

During this time I happened to attend a convention with Josh Blaylock, the head of Devil’s Due Entertainment. He approached my table and offered me some cookies that his mom made, and we started talking to each a bit about our respective ideas for publishing, storytelling, things we liked, and stuff like that. That “dance” continued for a while, and during one of our later conversations I told him my “dream” for how to use Kickstarter – and directly providing extra perks to pre-existing fans (as described above) – and his response was pretty-much “I’d be willing to do that.”

And now, here we are. [laughs]

Josh and I are two very dedicated and passionate people – yet also introverted and private — people, and, in all honestly, I think it took us little time to really figure each other out and how to play to each other’s strengths in a business-sense. I joke that he’s more of a punk rock guy while I’m a bit more metal – but I think the success of this campaign shows how well we function together, and I look forward to continuing this working relationship for a long time.

Oh, and as for ownership, Tales of Mr. Rhee is a completely creator-owned book. That was a non-negotiable for me, and Josh Blaylock/Devil’s Due was completely onboard for that… and we’re all the better for it! [laughs] 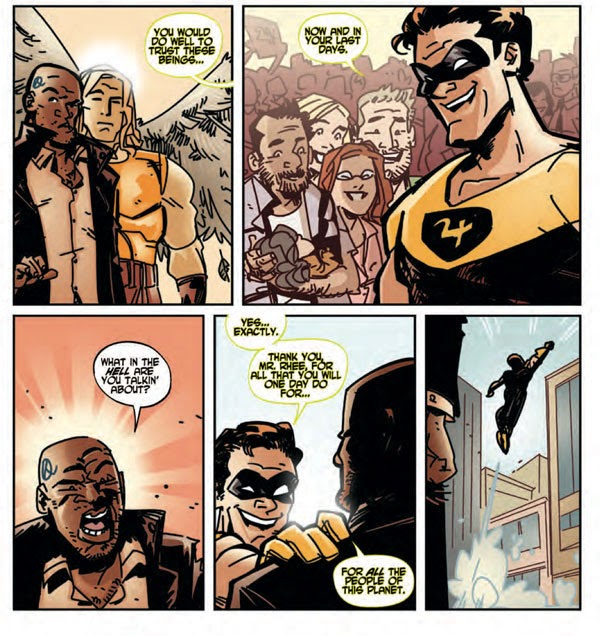 What’s next for Tales of Mr. Rhee? Do you have any upcoming projects we need to know about from the mind of Dirk?

Well, in news that should surprise no one, we’ve already begun production on Tales of Mr. Rhee Volume 3. [laughs]

I’m really excited about Volume 3, because it’s the most ambitious story I’ve ever told yet. Volume 3 is going to comprise five full-length issues, each spotlighting a different character (or characters), and each drawn by a different artist, as part of one large story. It’s going to really flesh-out the Tales of Mr. Rhee universe – all of the primary players – and lay the groundwork for the rest of the franchise.

Aside from that, the other new projects I have my eyes on include a second volume of Write or Wrong: A Writer’s Guide to Creating Comics (comprised largely of new material), Nightmare World Volume 4 (finally!), and perhaps even an all-ages series. Yes… seriously! [laughs]

Besides Kickstarter, where can we find info about all things Dirk? Are you still freaking people out at conventions?

Ha-ha! It’s funny… people read my work and then come to meet me at conventions, only to find out I’m not at all what they expected. I think people tend to have this vision of some super-scary dude in a top hat and scarf sitting on a throne of bones rather than the dapper looking gentleman with perfectly quaffed hair they find before them… [laughs]

That aside, yes, I’m already booked for 20 conventions in 2015, and people can find details on all of them – and all of my published work – at my website.

Thanks Dirk! Congrats and we can’t wait to see how you stretch it out! Hey, maybe you’ll get one of those TV show options. I could see Tales of Mr. Rhee appealing to a mass audience on the big or small screen!

There’s been talks… so we’ll see what happens! All I can say is, my dream casting for Mr. Rhee himself would be Rock Dunbar, who plays Sheriff Eli Roosevelt in Sons of Anarchy. He’d be PERFECT for the role. RHEE-ly perfect… [laughs] 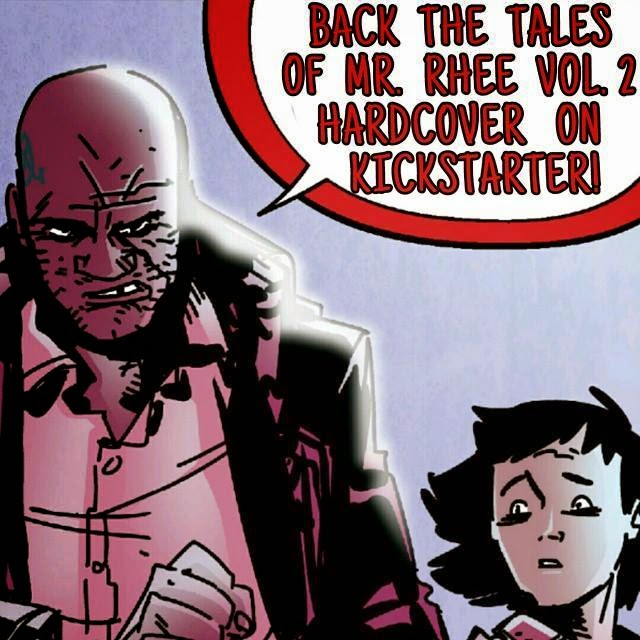