“Saturday, March 24, 1984,” brain Brian Johnson (played by Anthony Michael Hall) writes. “Shermer High School, Shermer, Illinois. 60062. Dear Mr. Vernon, we accept the fact that we had to sacrifice a whole Saturday in detention for whatever it was that we did wrong. What we did WAS wrong. But we think you’re crazy to make us write this essay telling you who we think we are. What do you care? You see us as you want to see us. In the simplest terms, and the most convenient definitions: you see us as a brain, an athlete, a basket case, a princess, and a criminal. Correct? That’s the way we saw each other at seven o’clock this morning. We were brainwashed.”

And so begins The Breakfast Club, a coming together of unlikely individuals who discover that despite their differences, they have much alliance and friendship together against a common foe, Principal John Vernon (Paul Gleeson). For those of us who were of the age of the characters when John Hughes’ immortal film was released, if we talk about the film, we must talk about ourselves.

Somehow in those 97 minutes, we were transformed, intrinsically linked to the characters. We learned that we ourselves are a sum of the parts—the brain, athlete, basket case, princess, and criminal who dwell within us all just like they did in that library.

The time was February 15, 1985, the day The Breakfast Club was released. 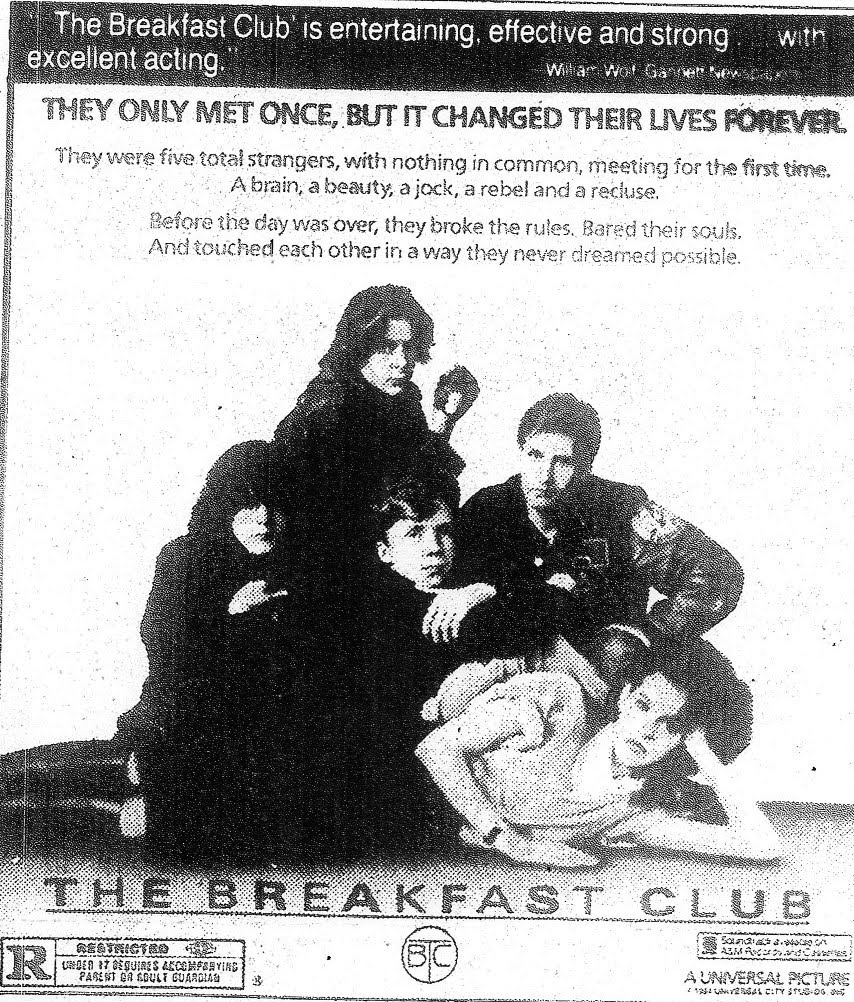 I was working at the Plaza Twin Cinema in Walla Walla, Washington as a snack bar jockey. My manager was upstairs putting together a brand-new print that had come in off the truck. When she queued it up for a test run, the booming strains of Simple Minds’ “Don’t You Forget About Me” rocked the empty theatre. What struck me was that I had just heard the song on the radio for the first time a day or two before and now it was in a movie! Of course, this was a time when the film industry was changing and more popular music was being used in films. 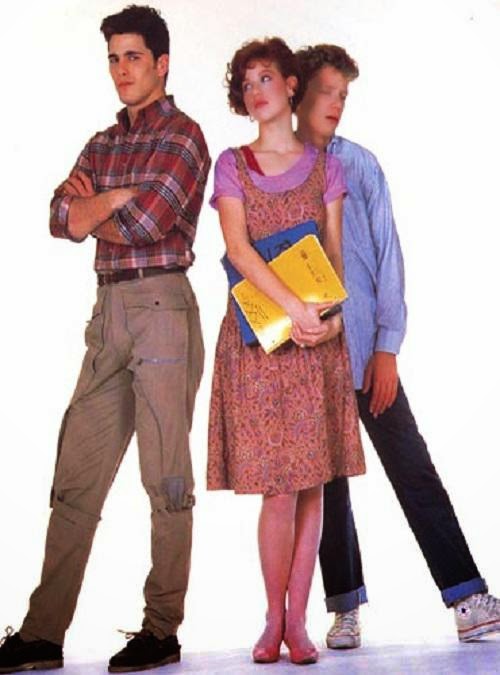 Why I mention it is that John Hughes’ films were not only at the beginning of that trend, they also influenced it.

In fact, everything about a John Hughes film had its own style. When people think of a John Hughes film (at least pre-Home Alone), they think of well-rounded teenage characters who have souls; energetic new wave music, mostly from the UK; and the fringe of colorful and edgy fashion.

Of course, John Hughes had a hit screenplay produced with National Lampoon’s Vacation two years earlier and had made his directorial debut a year earlier with Sixteen Candles.

The latter featured many of John Hughes’ distinctive trademarks—a disillusioned Molly Ringwald who was disturbed that nobody remembered her sweet sixteen when they were too busy with her older sister’s wedding. Not to mention a hunky heartthrob who doesn’t know she exists. She makes the unlikely friendship with an unpopular geek, Anthony Michael Hall, “Farmer Ted”.

All to the throbbing beat of bands like Oingo Boingo, Patti Smith, and Spandau Ballet.

Though Sixteen Candles was an entertaining romp with some emotional moments, it’d be a year later before John Hughes unleashed his Casablanca, his Seven Samurai, his Citizen Kane, the masterpiece that defined him to a generation—The Breakfast Club. 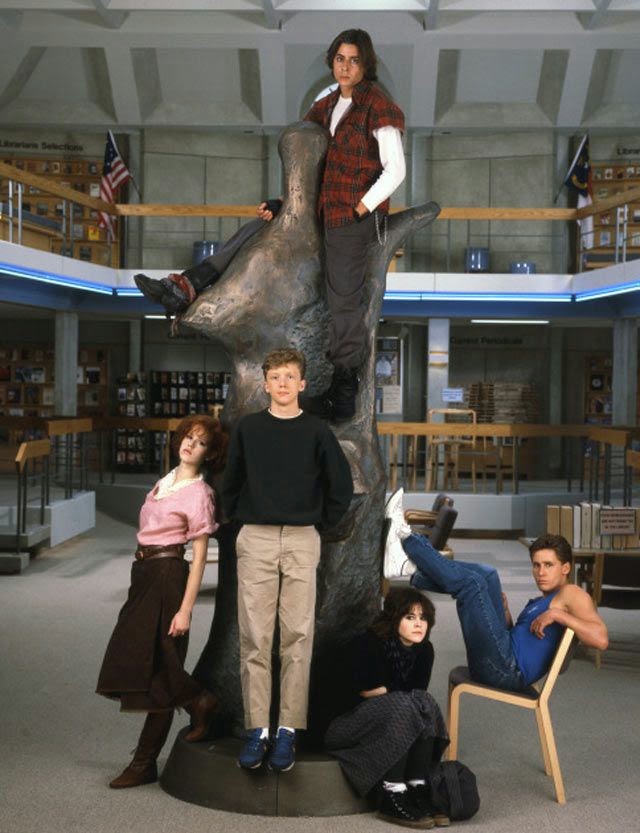 It had everything that one wanted in a Hughes film—insightful, quirky teens, raging pop music, and some of the most quotable movie dialogue ever written. “We’re all pretty bizarre,” jock Andrew Clark (Emilio Estevez) says. “Some of us are just better at hiding it, that’s all.”

The film is engaging in its simplicity of setting as the unlikely allies—jock, nerd, lunatic, princess, and rebel—meet in a Saturday detention at high school. No more were high school characters simply murder fodder for the likes of Michael Myers, Freddy Kruger, and Jason Voorhees. Here were young characters who mattered beyond the first reel.

John Hughes was now on the world’s radar, especially to the teens that this film spoke to.

Because of the success of Vacation, John Hughes’ Sixteen Candles was greenlit to go into production at Universal. He had the script to The Breakfast Club already in hand and it was his passion project that was also in development, but the studio wasn’t interested unless he made a raunchy teen comedy in the vein of their hit, National Lampoon’s Animal House. So Hughes had to write and direct Sixteen Candles to rocket The Breakfast Club into production, and then had to make Weird Science to launch it. 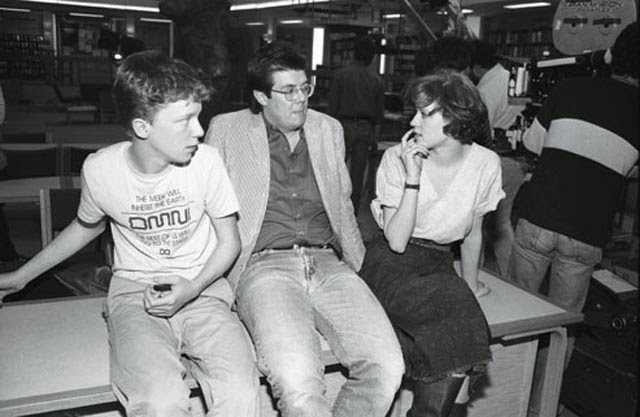 Dumped into the February time slot, which isn’t considered a great release month for films, The Breakfast Club’s popularity built slowly. It played for an unprecedented number of weeks at the Walla Walla theatre I worked at. Every night, more and more audience members began filling those empty seats. Teens started dressing and acting like the characters they saw up on the screen.

For myself, I was much like Anthony Michael Hall’s nerd character. I sported the JC Penney’s clothes my parents made me wear, but my soul was more Ally Sheedy’s artistically frustrated and loner Allison Reynolds character.

After seeing The Breakfast Club numerous times, I ditched the polyester gray slacks and button-up pink shirts for an old olive drab Army jacket and worn Levis. I grew my close-cropped haircut into thick, long curls and I even started popping rock music cassettes like The Police and The Cars into my Walkman (up until then I only listened to the soundtrack scores of Jerry Goldsmith, John Williams, John Barry, and Ennio Morricone).

Ironically, I wanted to be John Bender (Judd Nelson), who was the bully of the bunch (and for most of my public school career, I was a bully magnet). But dammit, I was a senior that year and I was going to be the cool one who was in charge, though I was fairly ridiculous. (It’s also rather fitting that our theme song at graduation was Simple Minds’ “Don’t You Forget About Me,” which I suspect was shared with other high schools in the spring of 1985.)

Being as impressionable as I was, I often took my fashion tips from movie characters. I was the first on my block to have a brown fedora and bullwhip after Raiders of the Lost Ark was released. When Romancing the Stone came out in 1984, I started dressing like Michael Douglas’ character, Jack Colton with the baggy khaki pants and blue denim shirt with a black t-shirt underneath. He was cool and he knew how to get the girls.

During that time, I started watching the credits and noticing who was who. One person who kept popping up on some of my favorite movies was Marilyn Vance (or as she was sometimes credited: Marilyn Vance-Straker). From 48 Hours, Romancing the Stone, The Breakfast Club, Predator, Weird Science, The Rocketeer, Die Hard, Pretty Woman, Mystery Men, Streets of Fire, Roadhouse, and Pretty in Pink, her character looks defined movies.

Today, Marilyn, who’s also a producer, and I are working on several projects. During our talks on the phone, she has shared many great details about John Hughes and his creation process. She had a long working relationship with him and he shared everything with her.

One of the reasons the music and image work so well in John Hughes’ films, she told me, was that they were often created that way. 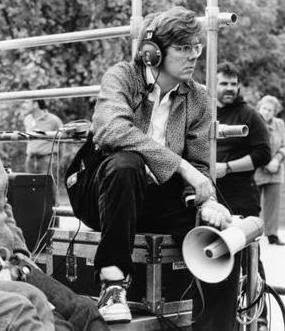 Hughes always began with the music, blasting it all night while he chain-smoked cigarettes and wrote scripts.

He was known for his prodigious speed. He wrote Sixteen Candles, The Breakfast Club, Weird Science, and many others like Uncle Buck in a few days over a weekend. He cranked out the screenplay for Planes, Trains, and Automobiles in about four days.

And if anyone has read a Hughes script, as I have many of them, it’s all on the page.

Not just the jokes and the visual gags that many of his films have, but the memorable dialogue, the characters, and the pathos.

Once Hughes had his script in hand, he brought in his people.

The visual was just as important. He called Marilyn his “visual voice.”

Marilyn said that his meetings would begin with the writer/director and his key production people sitting around on the floor of his house. He would play the music and tell the whole story. He was an intensely private person who stayed as far from Hollywood as possible, maintaining a farm in his beloved state of Illinois. If you were in his tight, limited circle, such as Marilyn was, you were in there for life. For a man who put so much heart into his work, he guarded it. 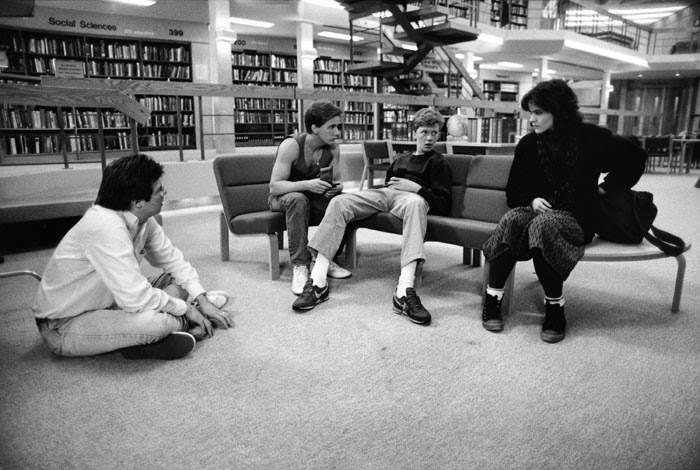 Marilyn was given free rein to bring the characters on the black and white page into full color. She had practice at doing this, as one of her first films was Fast Times at Ridgemont High, another zeitgeist teen staple of ‘80s movie theatres. Many of Marilyn’s looks and styles were symbiotic to the director, creating a whole visual tapestry that weaved from one film to the next.

As a teen in the ‘80s, I, like many kids was dressing like the characters I saw on the screen. Bands like New Order, the Psychedelic Furs, Simple Minds, Oingo Boingo fell on more mainstream ears. For me, I just wanted those baggy slacks, white leather jacket, and leopard-print vest that Marilyn created for the eponymous character in Ferris Bueller’s Day Off.

Marilyn’s final collaboration with John Hughes as his “visual voice” was for Uncle Buck, which was rather appropriate. This was a time when Hughes’ films were changing, bringing in more adult characters. The film inspired Home Alone with Macaulay Culkin years later, and dramatically changed the tone of Hughes’ films—and life—for the remainder of his career.

It was made three months before the demise of the man who died of a heart attack. A man who had so much heart, it turned on him.

As Allison Reynolds said in The Breakfast Club: “When you grow up, your heart dies.”

To which rebel John Bender responded, “Who cares.”

And her rebuttal: “I care.” 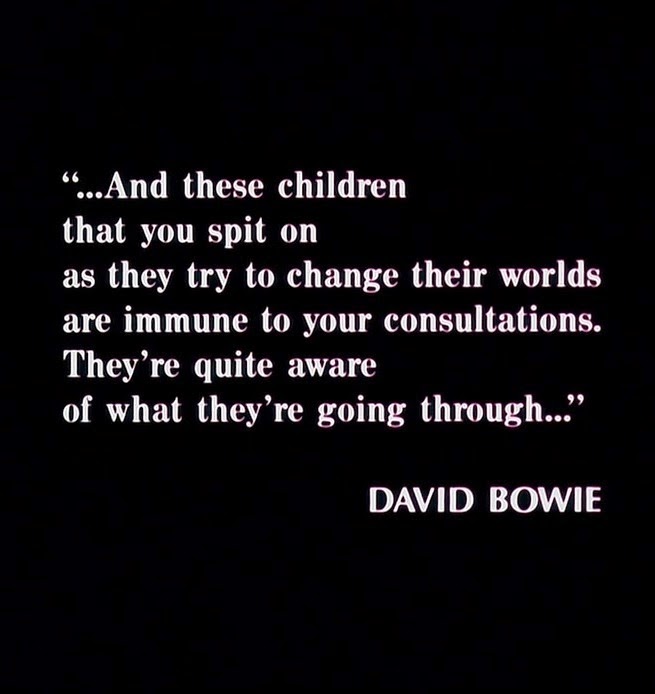 Don Roff is the author of over 16 books, including the bestselling Zombies: A Record of the Year of Infection. Also a producer, he has several film and television projects in development. Visit him on Twitter and Instagram, and Facebook.com/Author.Don.Roff