Y’all know me at this point.

Big fan of diversity in pretty much anything.

And these days, I’m all about TV.

Fresh Off The Boat
A first-generation Taiwanese-American boy struggles to get along in mid-‘90s Orlando.
Broad City
Two young Jewish-American women exist only for each other in Manhattan, often to their own and everyone else’s detriment.
Looking
A group of friends, primarily young gay men, go about their lives trying to live out their dreams and find love in San Francisco.
Black-ish
An upper-middle-class black family in Los Angeles tackles living through race in the 21st century. 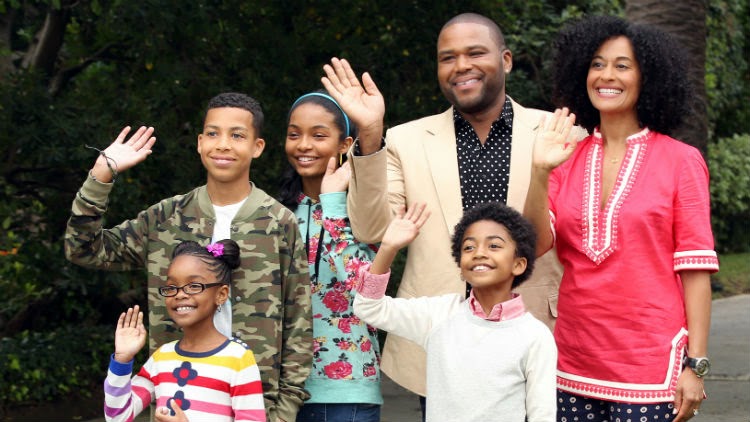 Cristela
A Mexican-American law school graduate in Dallas juggles her career and wacky relatives.
The Mindy Project
An Indian-American female doctor obsessed with romantic comedies tries to make her life into one.
Empire
A black family fights among themselves to inherit a hip-hop music label.
Orange Is The New Black
A white lesbian woman’s missteps land her in prison, as the stories of fellow inmates stretch into ethnicity, gender, class and LGBT issues. 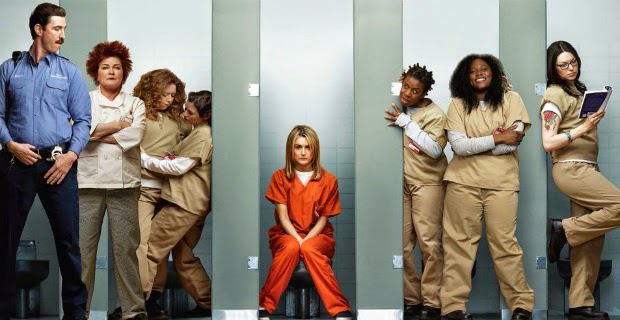 And that’s just a bit of what’s happening.
When you look at the landscape of TV these days, more and more diversity has shown up this year.

It’s still not quite as representative as they should be, but the amount of minorities on TV right now enjoying ratings success definitely speaks to something great.

Art is a great mirror to the world, and it’s always improved by reflecting more voices in that real world. You can take the same old sitcom concepts, the same drama plots, and they are renewed by using different perspectives.

There are only so many stories, but there are many ways to tell them. And if we keep going to the same well of rich and/or white folks, the art will look and feel more and more tired. 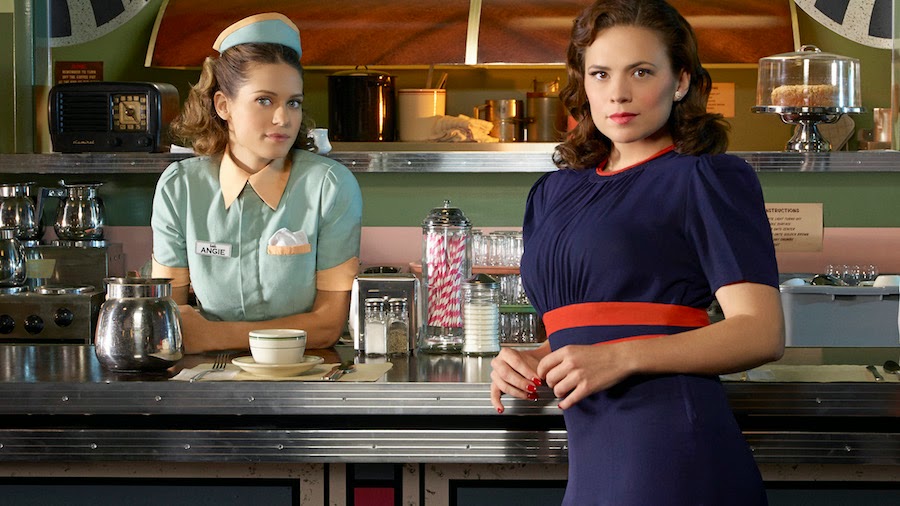 So if I’m gonna watch a spy-action comedy drama, give me more Agent Carter. The gender dimensions to Peggy Carter’s surroundings add a different level to the show, another maze for her to navigate, and it adds further color to the kinds of people who could found S.H.I.E.L.D.

A show about a hard-working civil servant climbing their way through government with wacky co-workers gets a boost when it includes Leslie Knope saying, point blank, “men’s rights is nothing” on Parks and Recreation. 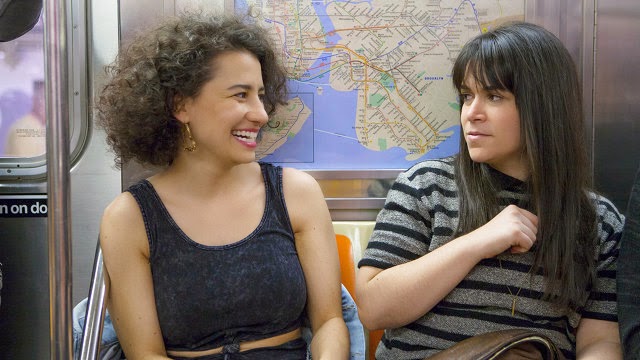 Want some self-centered goofballs in New York leaving trails of human wreckage behind them?

I am enjoying the hell out of Broad City.

We’re seeing a show placing the friendship between two women as paramount, while mixing in hilarious observations about life in the Five Boroughs.

For me, Broad City is Girls with more funny and less-scarring personal abuse. (And weed. Lots of weed.)

I still enjoy Modern Family, even though its stories too often keep the white or straight characters at the center while throwing the nonwhite or gay characters in as spices for the stew. For example, how many episodes have featured the buttoned-up Claire taking out her insecurities on Latina spitfire Gloria, only for Gloria to soothe her? 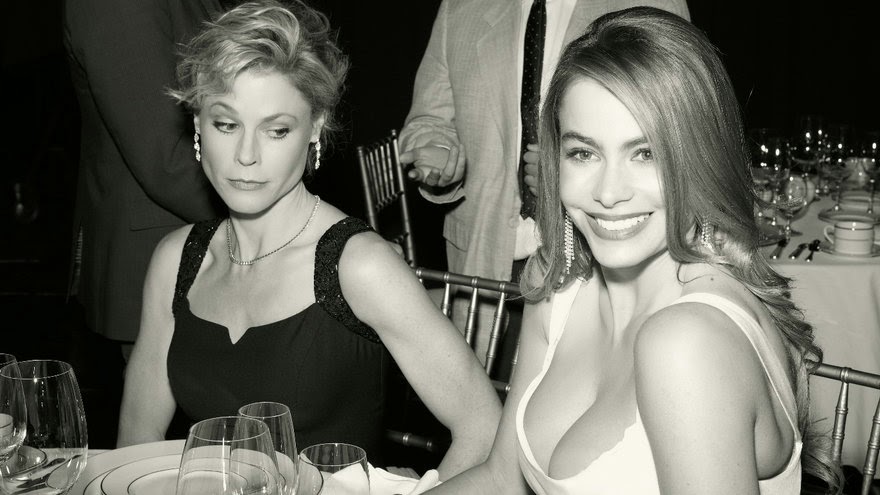 Or the numerous jokes meant to underscore Mitch and Cam’s ignorance on their daughter Lily’s Vietnamese heritage? Then there was the episode with the grinning Nigerian family. As many strides as the show makes, and it makes many, sometimes it all cracks of the kind of race jokes white people tell with the disclaimer that obviously they can make them because they don’t really believe it.

They call that “hipster racism.”

Modern Family’s style of mixing the diversity into the framework of the show, as I note, has its good and bad points. (Good point: We get to see Sofia Vergara do comedy.) It also works when a show can use the bait of looking one way, to hook viewers into something much more diverse. 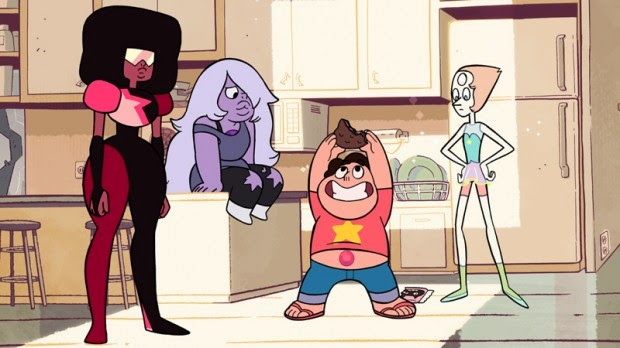 Think of the cartoon Steven Universe.

It’s the first Cartoon Network original program created by a woman, at a time when CN has come under fire frequently for its inattention to girls, and rightly so. The show was noted as still having a boy character at the center. But watch the program, and we see Steven as a little boy who doesn’t think things through, subordinate to three female super-beings, and wanting to be them.

Or, take The Walking Dead.

The show began with Rick Grimes at the center, and cartoonish takes on race (T-Dog? Dog.) and troublesome adherence to the “rule of three” (more than three black characters = black show), killing off a black character whenever it introduced a new one. Plus the show’s handling of female characters left Lori and Andrea as empty foils audiences soon hated.

Over time, several black characters have entered the show and become compelling characters, and characters such as Carol and Sasha are among the show’s best. Rick is not the best character on the show. 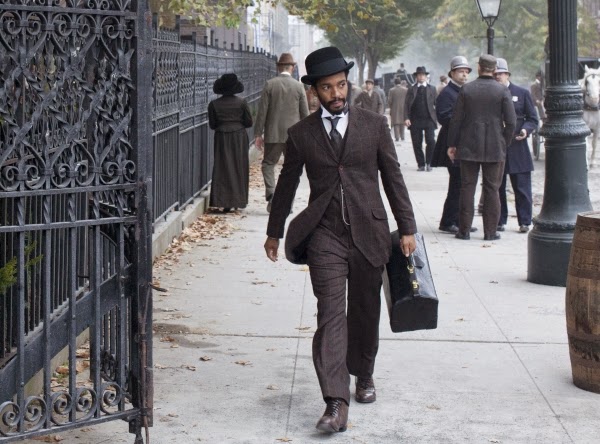 Showtime’s The Knick stars Clive Owen as the head surgeon at a Manhattan hospital at the turn of the 20th century.

But the show deftly has used its setting to explore race and gender issues. Owen’s Dr. John Thackery is not the best character on the show, as well written as he is. Andre Holland’s Dr. Algernon Edwards – a black doctor who benefited from the largesse of the wealthy white family his parents work for – is the show’s best role, full of conflict, wit, fear and determination. Juliet Rylance’s Cornelia Robertson and Eve Hewson’s Nurse Lucy Elkins, as characters also torn between two worlds of crushing privilege, seductive abandon and perilous safety, are right there with him.

The bait method has worked well, especially given how much we’re used to shows shipping in a nonwhite face on an otherwise all-white show. We’re so used to the sassy black friend that we make fun of the trope. The character sits there for punch, and you’re left wondering why he or she would know everyone else on the show. That’s how I feel watching Ron Funches on Undateable.
But if you make the character good, then they don’t stand out as much. New Girl and Happy Endings both do this pretty well. The more well-rounded the character, the easier it is, I think, to depict the essentiality of their sociopolitical identities without it being all the character is. 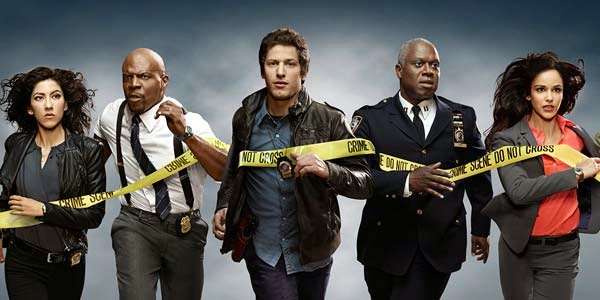 With solid writing, a characters’ race, gender, sexuality, etc., is not central to the role, but it’s not ignored, either.
That can be an issue with race-bent castings, I think. I love The Flash, which features black actors Candice Patton and Jesse L. Martin. There is no reasons Iris West, Barry Allen’s eventual wife in traditional DC Comics continuity, has to be white. And the role of Joe West is so crucial because he’s a foundation to understanding Barry. Martin, with his Law & Order background, comes in with instant cred as a police detective, and his emotive powers are put on full blast. 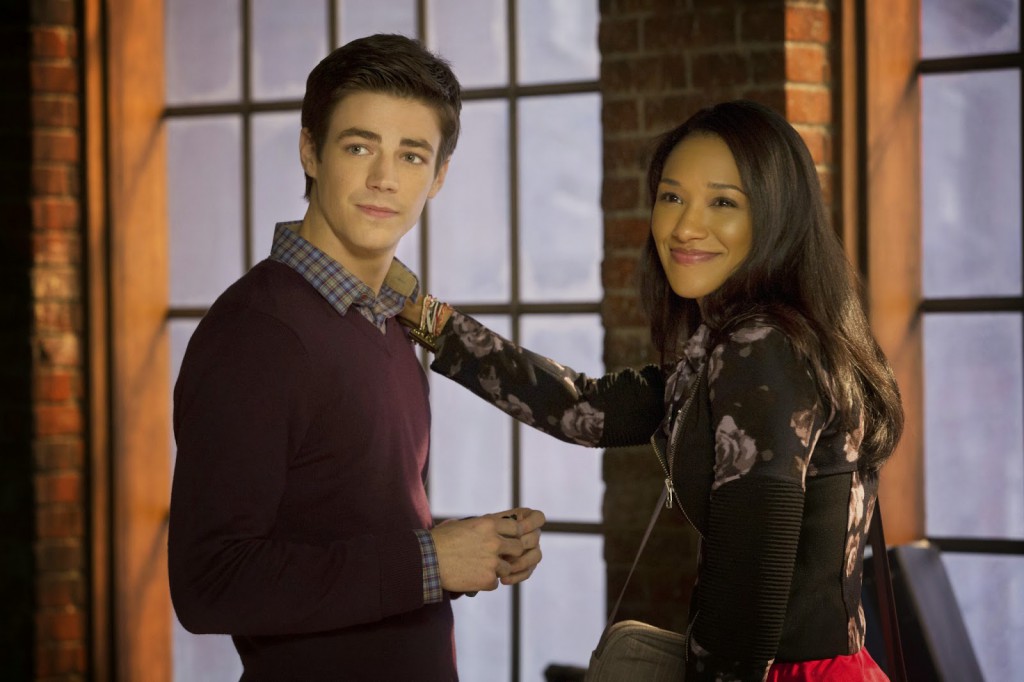 I do at times think about what it may mean for Barry as a white guy raised in a black home, if anything at all. I hink of how much a nonwhite point of view has affected me, or how white friends of mine who spend significant time with people of other ethnic backgrounds may stand out from folks of similar hue.

For Barry, shouldn’t it mean something?

It really has been a joy to see this diversity moving through mainstream TV, hitting on universal themes while also being pretty in-your-face about it sometimes. 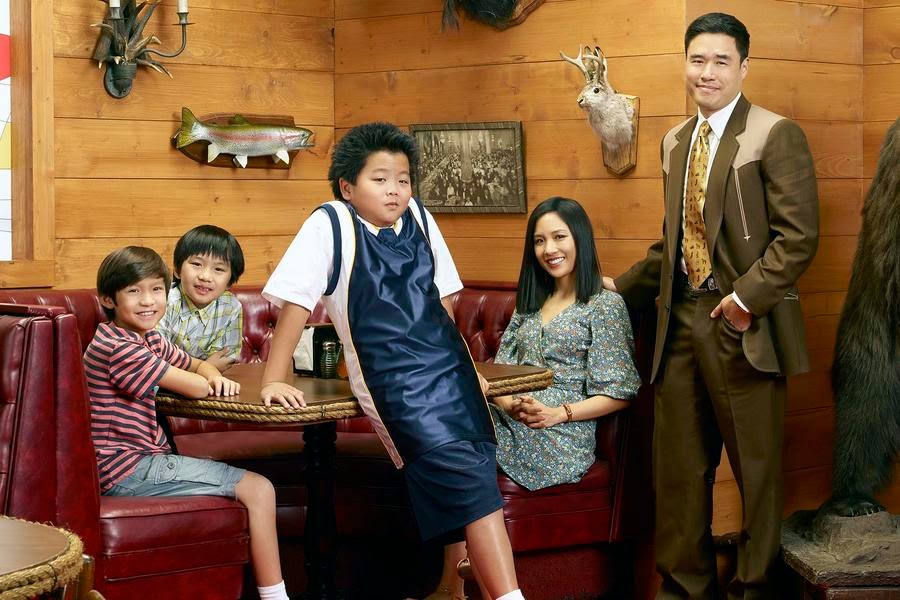 Fresh Off The Boat, from the memoir of fiery iconoclast Eddie Huang, is both confrontational stuff about anti-Chinese prejudice and pro-Chinese chauvinism, while also just making funny sitcom stuff about family.
Black-ish both lampoons Andre Johnson’s at-times outmoded attitudes about race and gives heart to his insecurities and fears related to racial inequities, while also being downright silly about Valentine’s Day couples or being a nerd.

How To Get Away With Murder featured probably the blackest moment on primetime network TV when Viola Davis removed her wig of straight hair before confronting her husband about an affair. 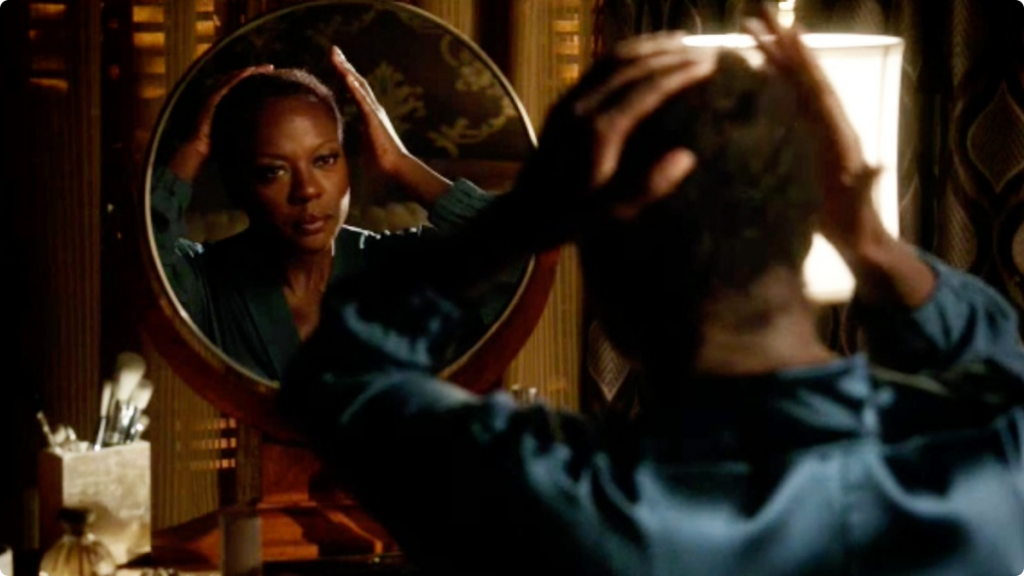 Wow. So, keep it coming, television.

CBS, riding a core audience of older, white viewers, is home to the super-conservative cop show Blue Bloods and an Asian-American character on Two Broke Girls derided as Long Duk Dong redux. The network announced last week that it has ordered a pilot for Doubt, starring black transgender actress Laverne Cox as a character that is a black trans female attorney, and hired Selma director Ana DuVernay as pilot director and executive producer on civil rights drama For Justice.

As the ratings keep coming in for diverse shows from Jane The Virgin to Inside Amy Schumer and The Nightly Show with Larry Wilmore, I really am looking forward to more networks signing on. If they respect that brown brings green, I’ll take it.
For sure, I’m not finding my diversity fix too much at the movie theaters. Not in an industry in which the 20 Oscar actor nominations went all-white for the second time in nearly 20 years, in a year where the wonderful Selma is chock full of great performances, and DuVernay is ignored. 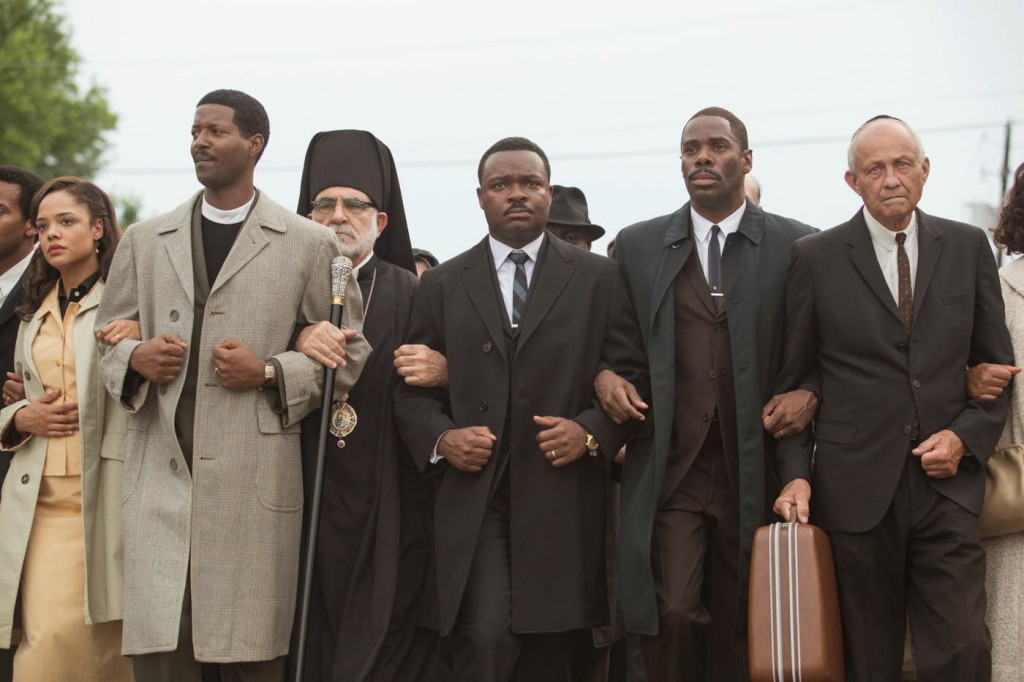 Not when that same film is savaged by hagiographers disappointed that President Johnson isn’t portrayed as Martin Luther King Jr.’s great white hero. Whereas Lincoln, for example, wasn’t sunk despite a movie about the president’s push for abolition didn’t feature adviser Frederick Douglass.

Not in a world where DuVernay had to create fake speeches for King because his family sold all the rights to DreamWorks.
Not in a time when the story of a wartime sniper, battling fictional Arab villains, is the top film on Martin Luther King Day.
I’m not really finding that diversity in mainstream pop music, where the derivatives of black music reign with fewer and fewer black artists. Not where the Billboard charts have found new ways to segregate black artists.
Not in a music biz where Sam Smith gets more airplay, the Grammys hand out the top rap album to Macklemore, Justin Timberlake is a household name rather than Raphael Saddiq, and Annie Lennox no longer knows the origin of “Strange Fruit.” 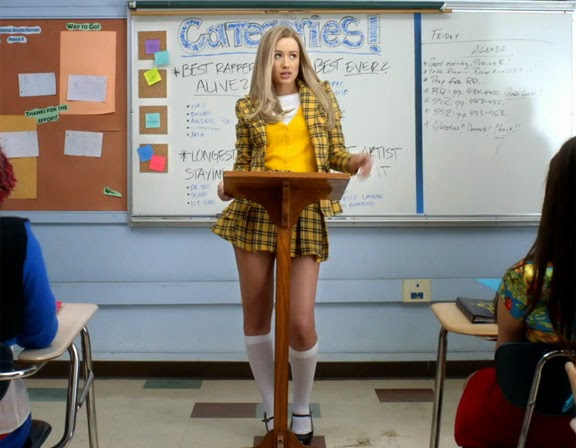 Miley Cyrus trots out black bodies in pursuit of coolness-by-association, Iggy Azalea takes song of the summer and no black female rapper not named Nicki Minaj can see the light of day. Folks are busy slamming Beyonce to elevate Beck for something Kanye West said, and folks spend a week spewing shopworn rhetoric of genre and collaboration steeped in gender- and race-based biases.

So you’ll find me back at the one place bringing diversity into our homes these days, back in front of the warm glow of the television set.

Keep watching. But be careful; it’ll rot your bigotry.