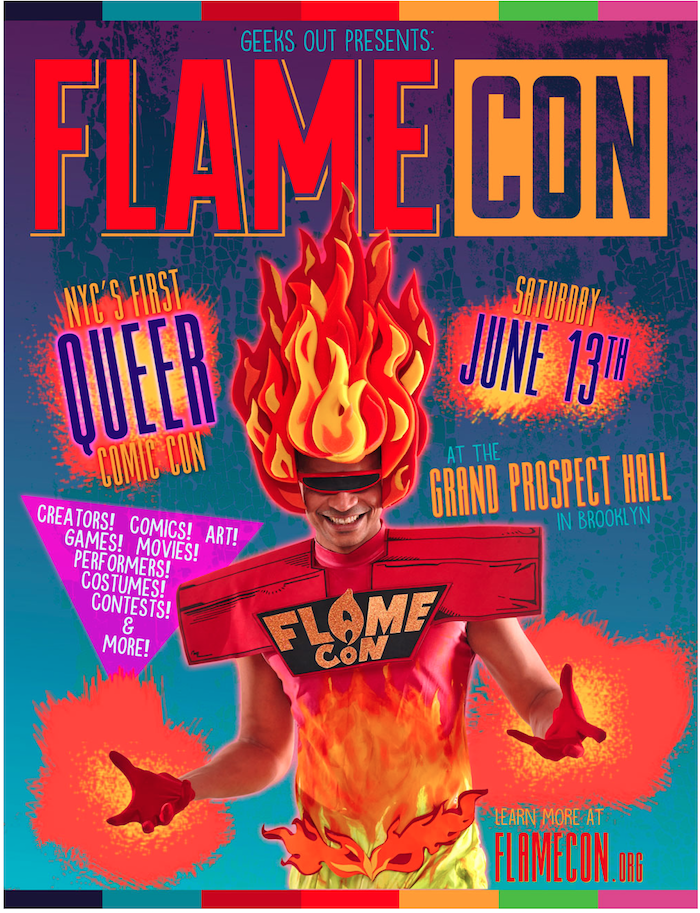 Geeks OUT is excited to announce that NYC’s first-ever queer-focused comic con, FLAME CON, will be held on Saturday, June 13, 2015 at the Grand Prospect Hall in Brooklyn. After running a successful Kickstarter for the event last November, which raised over $19,000, Geeks OUT is set to bring together LGBTQ fans on an unprecedented scale. Geeks of all types are invited to attend and celebrate the diversity and creativity of queer geekdom and LGBTQ contributions to pop culture. This year, NYC Pride month will get its geek on!

Flame Con will be a one-day comics, arts, and entertainment expo showcasing creators and celebrities from all corners of LGBTQ geek fandom, including comics, video games, film, and television. There will be thoughtful discussions, exclusive performances, screenings, costumes, and more! The expo will be followed by an after-party, also taking place at the Grand Prospect Hall.

More details about Flame Con will be released soon at flamecon.org.

The Grand Prospect Hall is a landmarked NYC gem. Built in 1892 to resemble a Victorian opera house, it is famous for its classical opulence and charming TV commercials. Its grand chandeliers, gold leaf decorations and ornate marble sculptures will provide an appropriately glamorous backdrop for what is sure to be a unique and flamboyant comic con!

The ballroom (pictured above) will be the main exhibition space for Flame Con and its after-party.

ABOUT GEEKS OUT:
Geeks OUT is a 501(c)3 non-profit organization dedicated to rallying, empowering, and promoting the queer geek community. Formed in 2010, Geeks OUT has brought a positive queer presence to several large comic conventions and hosted a wide variety of community events in the NYC area and across the USA. Geeks OUT events have included art shows, geeky self-defense classes, movie screenings, bar crawls, and a global awareness campaign against the Ender’s Game movie
franchise.