As the title would indicate, this episode introduces us to the concept of the Red Hood, a new masked criminal in Gotham.

In addition, an old friend of Alfred’s that he served with, pays Wayne Manor a visit. 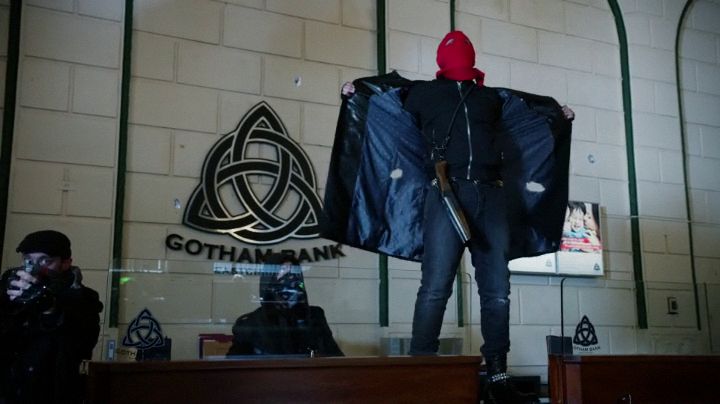 Fish’s story was not only more interesting than Penguin’s for once, but it also delivered on of the most shocking moments of the season so far. I won’t spoil it but if you saw the episode you know what I’m talking about. 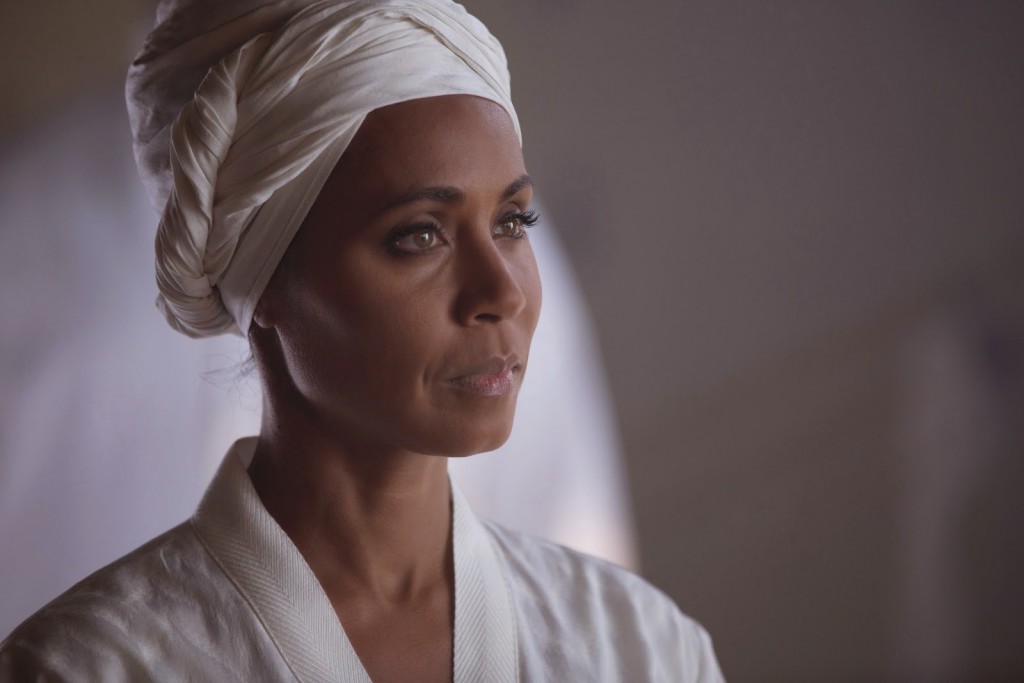 Gotham has achieved the unspeakable and surprised me. And it’s actually making me warm up to Fish, which is even crazier. Turns out getting her out of Gotham was the best thing they could have done with her.

The A story involving the titular Red Hood was handled pretty well. I didn’t know what to expect with this storyline, even though I did get suckered in and watched the mini-featurette online, which goes into how this introduces the idea of masked villains in Gotham and paves the way for more masks to appear down the line. 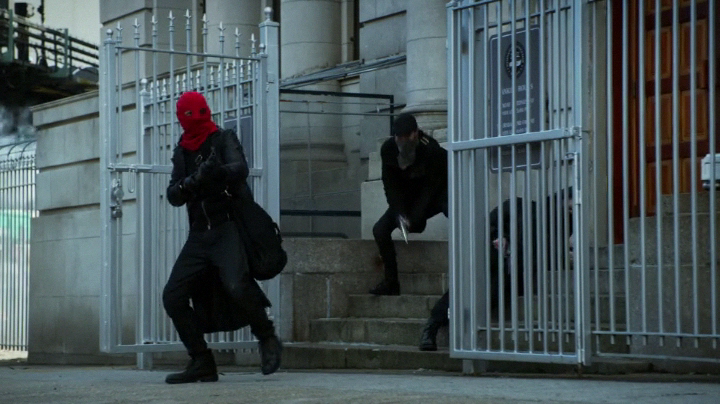 It was an cool take on the Red Hood concept and hopefully future villains will be handled similarly.

For once even the Alfred/Bruce storyline offered a shock and also gave us some nice backstory into Alfred who up to now has been pretty one-note. 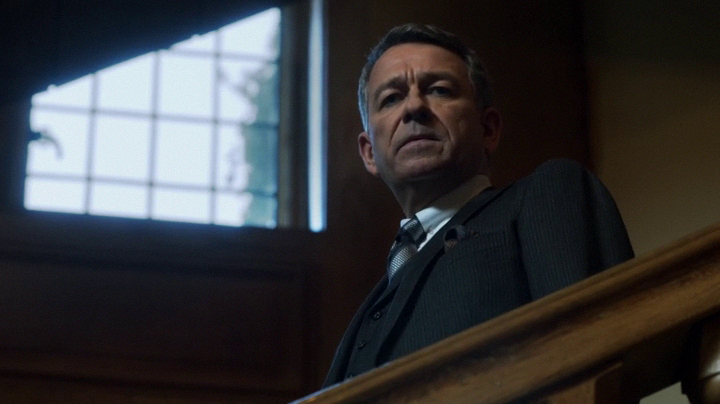 He’s a much more complex character than the show has portrayed up until now so it’s about time they recognized it and dug a little deeper.

It might seem like I’m just looking for stuff to complain about (I really am not), but from the opening scene, the music completely took me out of the show. I guess it’s too much to ask for a show to have a movie score quality soundtrack, but considering Batman: The Animated Series seemed to manage week after week, I’d like to think that’s not too much to ask. The music in the opening scene was more cartoony than a cartoon score, and was a pretty bad note (no pun intended) to start out on.

Once again the Barbara scene at the apartment was completely stupid. I don’t really know where they’re taking her character, nor do I care, but she was actually pretty out-of-character this episode. 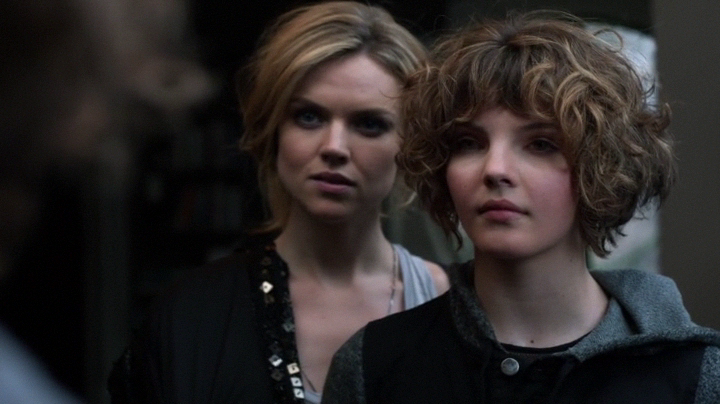 She starts offering up fashion tips to Selina and Ivy or something and then telling Selina about how she can use her looks as a weapon. What is this, a brothel in the making? Can someone please tell the writers that if they don’t have something for a character to do that they are not obligated to write them in?

Also what happened to detectives Montoya and Allen? Have they been written out entirely? I’m disappointed because I really thought this show was going to be their coming out party to the mainstream but instead they’ve ditched them in favor of more scenes featuring Selina, Barbara, and Bruce. I really wanted the GCPD to have a lived-in feel with a rotating cast like the CSI team, but obviously that’s not going to happen.

One of the most irritating things about this episode on a personal level was the cheese factor attributed to the new villain introduction. Fish is brought to the man in charge. He explains that the doctor who runs things is away. Fish demands to know his name to which the man replies “Dr. Dulmacher.” Fish repeats it back, enunciating the name in a condescending manner. If it wasn’t clear the first time his name was said allowed, they all but spell it out for you with Fish’s delivery. 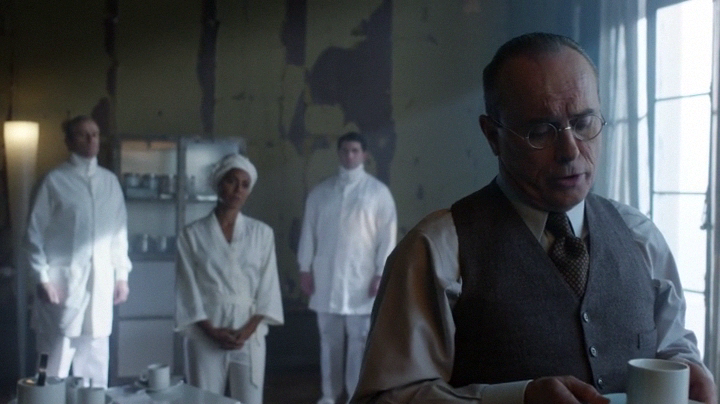 Dulmacher is a weak ass play on Doll Maker, another Bat foe. My suspicions were already leading me in this direction but it was the dumb moniker on par with something out of an Ed Wood movie (Dr. Acula, anyone?) that sealed the deal.

Just when they were SO close to ending the episode on a high note, they had to screw it up with a lame scene of at the end involving a kid who walks onto a crime scene, picks up the red hood, then points his fingers at the cops in a gun shape. 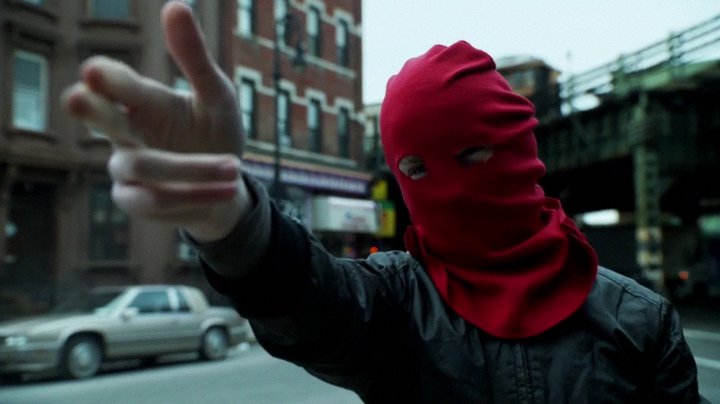 It was completely and unnecessarily eye roll inducing and felt like a lame attempt to keep the door open “just in case” like a bad movie gunning for a sequel or yet another foreshadowing of a potential Joker.

As mentioned previously, we get a little closer to meeting Doll Mak—er, I mean Dulmacher. I’m interested to see where they go with this storyline and hopefully finally see a Bat-villain promoted to a more prominent level of awareness in the same way that the Adam West series brought the Riddler back and the Batman animated series revitalized Mr. Freeze. We’ll have to wait and see.

And of course the Red Hood, a major part of the Bat mythos. If the tacked on final scene is any indication, we haven’t seen the last of this character as the episode sets up the notion that multiple people can don the hood, so I’m glad they got that part right. 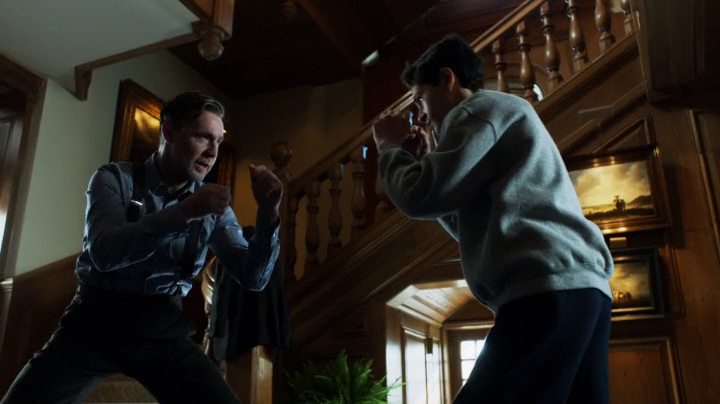 Speaking of the Bat himself, Bruce leans some new fighting method’s from Alfred’s old friend, whose advice is to use anything at your disposal to get the upper hand in a fight. Alfred doesn’t approve of these fighting techniques but Bruce seems open to adding to his arsenal of fight styles and gives us a little more of a glimpse of who he will become.

This episode did a lot right. There were memorable scenes and some shocking twists that made it more than just the average episode. It’s about time they started upping the ante and so I’m all for this direction.

This episode wasn’t without its typical Gotham cheesy moments, but the good outweighed the bad and I actually found myself enjoying it. 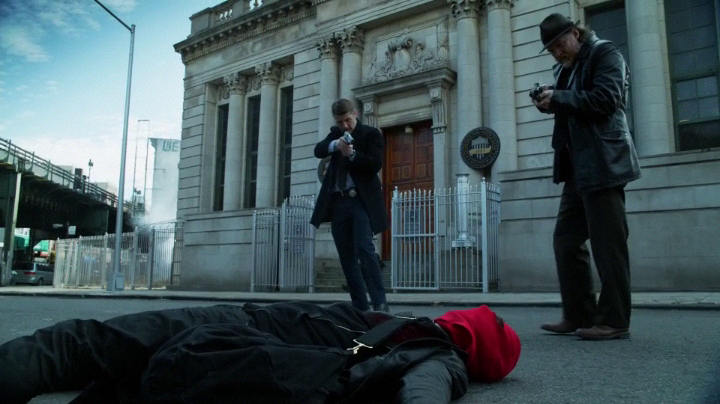 There’s only a handful of episodes to go this season so hopefully they’ll keep things moving forward in this direction.