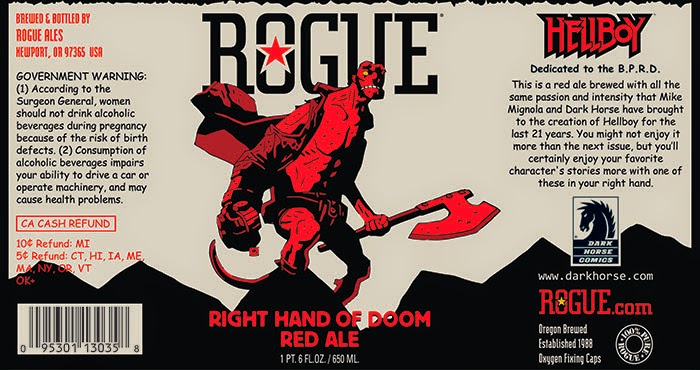 To celebrate the 21st anniversary of Mike Mignola’s legendary Hellboy character, Dark Horse Comics and Rogue Ales have collaborated to create the RIGHT HAND OF DOOM, a limited edition beer that will be available online beginning February 22, 2015 at www.rogue.com.

“When Dark Horse Comics published the first Hellboy story 21 years ago, I never thought there’d be a Hellboy beer,” said Mignola. “But I really can’t imagine a better time for Rogue to introduce the Right Hand of Doom beer. If Hellboy was real I guess he’d finally be able to buy me a beer.”

“Hellboy has appeared in graphic novels and comic books, prose novels, two animated features, two live action films, toy lines and all manner of merchandise,” said Mike Richardson, President of Dark Horse. “Rogue Ales approached us with the idea of creating a heavy-handed, supernatural red ale and we loved the idea of two independent, Portland based companies coming together to create something new that would be both fun for fans and worthy of the Mike Mignola’s creative legacy.”

“This beer is dedicated to the B.P.R.D,” said Brett Joyce, President of Rogue Ales. “RIGHT HAND OF DOOM is brewed with all the same passion and intensity that Mike Mignola and Dark Horse have brought to Hellboy for the past 21 years.”

The RIGHT HAND OF DOOM label features a Hellboy drawing by Mignola. The beer will be available for the first time publicly at an event at Things From Another World Comics store in Portland on Friday, February 20 at a signing with Mignola and fellow comic book superstars Matt Kindt (MIND MGMT), Eric Powell (THE GOON) and Brian Wood (REBELS). The event begins at 4 PM, with Mignola’s signing scheduled for 6 PM. The beer will be available nationally via https://buy.rogue.com/Rogue-Hellboy-Right-Hand-of-Doom-Red-Ale; pre-orders are now available.