Universal has been developing a new sequel to Conan The Barbarian with Arnold Schwarzenegger set to reprise the titular role. The film titled Legend of Conan is a direct sequel to the original film and is said to ignore the last two terrible films.

It’s a new trend in Hollywood to scrap lesser films from canon and focus on the good ones, Paramount doing it the same with Terminator: Genisys which is another Arnold franchise getting resurrected.

In this case it’s a good thing since Conan The Barbarian is easily the peak of the fantasy genre and having new material as it’s direct offspring isn’t a terrible thing. Barbarian’s fingerprints can be seen in almost every fantasy film made since including Peter Jackson’s Middle-Earth saga.

Producer Chris Morgan, who you might know from The Fast And Furious franchise and Wanted is currently one of the creative producers on Universal’s Legend of Conan.

Morgan spoke to Empire Magazine about the current direction of the film along with the script which was originally written by Straight Outta Compton‘s Andrea Berloff and now getting rewrites from Gangster Squad‘s Will Beall.

“Andrea Berloff [Straight Outta Compton] did a draft,” Morgan reminds us, “and then we had Will step on. I approached him early on in the process, but at the time he was unavailable and couldn’t do it. But then a couple of weeks after he passed on the project I got this package from him in the mail, and I opened it and it was a Conan sword, and on the envelope it said, ‘This you can trust!’ So when he called back a while later said he’d had a slot open up, we slammed him in immediately. He’s just perfect for it; he loves it as much as I do and he has a great voice of Conan. It just makes you happy!”

“We look at all the source material and we love things that kind of speak to that tone. We’re incredibly respectful to Howard. I’m a huge fan of the stories and books, but I’m a super-huge fan of the first movie, because that crystallised and distilled it all for me. Milius just killed it. He did such a good job. And Legend Of Conan is really resonant and it really digs into the legacy of that original film. I’m already very proud of it.”

This new update combined with talk that the studio is aiming for a production start in the spring could mean the sequel is indeed coming together. Arnold was saying they were possibly looking to shoot it in New Zealand with the help of the team at Weta, hopefully that isn’t just cigar smoke he’s blowing at us.

“[Universal] finally came forward and said, ‘You’re absolutely right. The previous regime has missed the boat here. We want to pick it up. We’re going to buy the rights and we’re going to be serious about it and make a quality film with an A-director and with A-writers and so on. And we want you to participate in this. We want you to star and you to play Conan. We’re going to take a story where Conan is at that age so it’s totally believable and you’re not looking like a 30-year old action guy.”

As for a director there had been some interest from Paul Verhoeven (Black Book, Total Recall, Basic Instinct, Robocop) to make the project when asked about it back in early 2013 via Arnold Fans. At the time a script didn’t exist to show the director but it’s starting to sound like they might be able to at least meet with Veroheven.

“If they asked me, I’d certainly love to – let’s put it that way,” he says. “But I don’t know what the script is. I don’t know what Arnold wants. I’m a big fan in fact of Conan. That’s a great movie and I found that the composer, Basil Poledouris, basically inspired many of my movies [the soundtracks] like Flesh and Blood, RoboCop, Starship Troopers and Total Recall. The score of Conan is great. The style of editing that Milius used was very beautiful, and Arnold does a great job. He was really the perfect choice.” 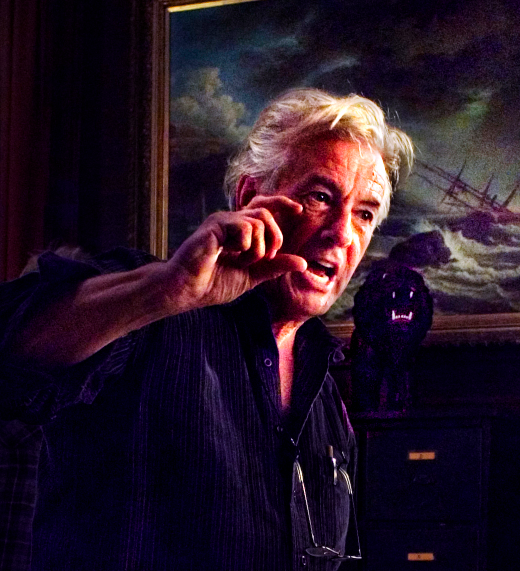 They almost re-teamed for Paul’s movie Crusade which would have been another violent sword-swinging action flick.

I imagine this could easily be a way to make-up for that project never coming together.

Hollywood has since been remaking most of Paul’s films including Recall and Robocop, there is even a Starship Troopers remake in the works he might as well return to show these fools hows it’s really done.

Verhoeven is currently shooting the dark thriller Elle which could be finished principal photography in the next couple of months. I’m unsure what his post-production process is but if he does leave the film in the hands of an editor he could be able to start pre-production soon after. The film not really having special effects it’s turn-around shouldn’t be too time consuming.

Then again, they could easily push the production start a couple of months to allow Paul to finish post before jumping into pre-production on Legend.

Although, back in October Arnold Fans, who also gave us those Verhoeven quotes heard from Francis Ford Coppola about John Milius being able-bodied to direct the new film.

We should point-out that John hasn’t made a film since 1997 and recently suffered a stroke. Aspects that could make Universal a bit nervous about hiring the director for such a large and costly production.

Milius famously wrote Apocalypse Now for Coppola along with Conan, Red Dawn, Dirty Harry and produced the HBO series Rome. It wouldn’t make sense to have him direct the film without him contributing to the actual script since being one of the most accomplished Hollywood writers, so I’m hesitant for all these reasons to believe Milius is returning.