Disney blog Stitch Kingdom has gotten ahold of a batch of high resolution images from Marvel’s Avengers: Age of Ultron.

The images include an image of Andy Serkis and reveals his character to indeed be Ulysses Klaw as listed by Marvel. 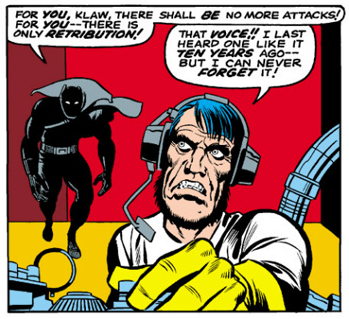 We had already assumed that Serkis was playing Klaw just by his facial hair alone. Not to mention his necklace that included an animal claw, very subtle Marvel.

This character confirmation of sorts seemingly also gives the impression that Wakanda’s presence will be bigger than previously expected. Something that might have been hinted to in the second trailer.

Klaw is primarily known as the one of the most well-known in Black Panther rogues.

There hasn’t been word if we’ll see Chadwick Boseman’s T’Challa in the film but there have been hints he could show-up at the very end with a cameo that remains to be seen.

It’s expected some of T’Challa’s story will be told in Captain America: Civil War, we shouldn’t be shocked to see Serkis’ Klaw involved in that film as well.

Warner Bros. Pictures’ ‘Wonder Woman 1984’ Flies To Historic Simultaneous Release In Theaters And On HBO Max In The U.S. On Christmas Day

Today, Warner Bros. Pictures announced that its highly anticipated superhero tentpole film WONDER WOMAN 1984 will be released simultaneously in theaters and on the HBO Max streaming...

‘The Twentieth Century’ Gets a Poster and Trailer!