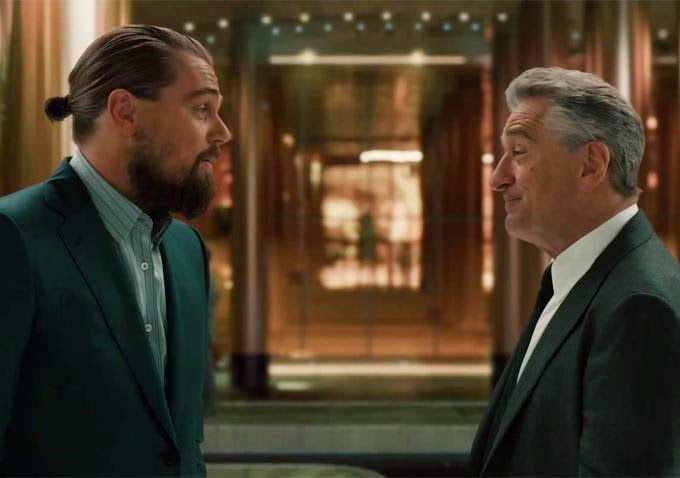 Haven’t watched it yet? Then take a gander at it below; we dare you tell us it’s not the greatest thing you’ve watched all day!

The Audition. Coming soon on a screen near you

This short movie will mark the first time that De Niro and DiCaprio collaborated together on a project under the direction of Scorsese, fulfilling the dreams of many a fan, particularly those who love a good gambling movie.

Incidentally, both actors played a role in a gambling-themed movie directed by Martin Scorsese. Robert De Niro did it first, back in 1995, when he played the role of a tough, no-nonsense gambling handicapper in the widely-acclaimed Casino.

Leonardo DiCaprio, of course, played the role of eccentric multimillionaire and Vegas tycoon Howard Hughes in The Aviator (2004).

Now, the two men will be battling it out on the silver screen for the chance to get top billing in The Audition, a short film which sees the actors competing, or rather, vying, for the same part as Scorsese so eloquently puts in the trailer.

The film is slated to be released later this year to coincide with the inauguration of the newest casino in Macau, the $2-billion, movie-themed Studio City. Aimed exclusively for high-rollers, this ultra high-end gambling venue will be dedicated entirely to Hollywood and the brightest stars in movie history.

Studio City will be the first cinema-themed luxury gaming venue to grace what is known as the Las Vegas of Asia, Macau, and when complete the property will combine a hotel, retail and gaming establishments, as well as top-notch film and television production facilities.

The Audition will be another Hollywood and Las Vegas lovechild, a project which combines the glamour and glitz of Tinseltown with Sin City. The history of movies is replete with films based in or around casinos, or where gambling plays a central point in the plot.

Movies and gambling: A match made in heaven

Scorsese himself certainly had a hand in strengthening the bond between movies and casino gambling, however let us not forget the equally prominent on-screen forays of card games, most notably poker.

Ever since Steve McQueen shuffled a deck of cards on The Cincinnati Kid back in 1965 and culminating with the relatively recent explosion in the popularity of internet poker, especially the Texas Hold’em variety, thanks to James Bond in Casino Royale a few years ago, movie stars have had a direct influence on the popularity of the online poker industry and gambling in general.

Watching their favourite actors playing the game has led to a larger number of people to tempt their luck at playing poker. With the rise of online poker and the incredible ease with which you can open an account and start winning real money by playing against people from all around the world, becoming a poker champion from the comfort of your home has become a reality.

But why stop there? You can play poker anytime, anywhere directly from your tablet or smartphone, making it easier than ever for moviegoers to emulate their on-screen heroes and make a handsome winning by playing poker online wherever they may be.

With generous welcome bonuses and ongoing promotions offered by reputable online poker operators, new players can open their gaming accounts in seconds and watch their bankrolls expand before even playing their first hand!

With a gambling history spanning over 150 years, Macau has overtook Las Vegas in terms of gamblers’ spending and the 30-odd casinos located there rake in billions from the tourists who visit there purely to try to strike it big.

Nicknamed the Las Vegas of Asia, as well as the Monte Carlo of the Orient, Macau is a gambling paradise which attracts not only high-rollers but also Hollywood A-listers shooting their next big movie, although those two groups aren’t mutually exclusive. Macau has already featured in many gambling-themed movies and The Audition is one more win on its impressive record.

We can’t wait until the full movie is released, which should be sometime this summer. Until then, we’ll continue feeding our imagination by re-watching classic casino movies and trying to replicate our on-screen heroes’ gambling successes online by playing a hand of poker or two.