With Valentine’s Day on the horizon, naturally there are countless articles and features all about love and relationships strewn across the Internet.

This is all well and good, love makes the world go round, love is all you need, it’s all so lovely et cetera, et cetera… but one thing I think we can all agree on is that there is a lack of content on the subject of sex.

Of course, this is prime example of sarcasm, another thing we lack here on the Interwebs.
Despite the over-saturation on the subject, you can’t talk about love and relationships without at some point mentioning the physical side of it. But what do games have to do with it and why are you reading a gaming column about sex, you pervert?
Well, I’ll tell you in the form of a haiku because poetry is romantic;
The adage ‘sex sells’,
is cliched as hell and yet,
no gamer is safe…

In a nutshell, every medium has been sexualised in some way and games are definitely no exception.


Video games have long been at the heart of controversy when it comes to mature content, there’s the quite terrifying Custer’s Revenge, where you play a naked (except for his hat and boots), ‘Colonel Custer’ and the aim of the game is to have sex with a tied up Indian woman…presumably against her will. Shocking, right? Well, this was in 1982 and it was a title on the Atari 2600. Of course there was a lot of protest over Custer’s Revenge however, the problem with controversy is that it generates attention, meaning more games sell.

This article is not about the controversy surrounding the subject of sex, I’m certainly not a prude and I am extremely comfortable with my sexuality, in my opinion ‘sex’ is not a taboo subject and thinking of it as such, is unhealthy. Games like Custer’s Revenge and Rapelay (you can go look that up if you really want, I don’t recommend that you do) aside, what really irks me about sex scenes in games is how badly conveyed they are.
Games today are more mature than ever, but in all the wrong ways.

It’s as if any scene explicitly or implicitly portraying sexual activity is utterly disjointed from reality. I don’t just mean that from an uncanny valley mindset, while virtual representations of human nature in any form are ultimately creepy, video game sex is so far away from real life that it feels as though it’s completely separate from the act it’s supposed to be representing.


It’s a combination of factors, however one of the culprits is an all too familiar bugbear of gamers in general; clunky dialogue. Bad dialogue and terrible scripting usually stems from a budget so small that the company has no choice but to hire random bystanders off the street to record their voice work.
Hey buddy, can we record you saying some stuff for £10 and a hot meal? Of course we can! Step right this way and don’t forget to sign on the dotted line.

Another issue is that no matter how artsy or tasteful a sex scene in a game seems, ridiculous dialogue often takes the player out of the experience and reminds them that they are playing a game and this scene (according to the games writers) is absolutely necessary because in some way, you have been wired through mass-media to accept sexualised content, after all, we’re all just massive perverts and that’s okay, forget about that and keep watching because we won’t let you skip this part…w-wait stop trying to change the camera angle and pay attention to the wonderfully scripted and well thought out sensual dialogue we’ve so lovingly written. We wrote it like a film for you…
And therein lies another problem; the games industry seems adamant that games should be more and more like films, especially since the technology makes characters so photo-realistic. Is it any wonder then, that the portrayal of lust and sexual relationships is so flawed in gaming when it’s copied and pasted from the movies, where we’re told all women need a man to be happy and if you’re not doing it with at least two or three sexy ladies, you’re not a man?

Sex in films is wholly unnecessary (unless of course you’re watching a porno in which case, do carry on), it rarely, if ever adds anything to a story. It just feels awkward (especially if you happen to be watching a film with your parents) and is unrealistic (ever felt the pressure to have sudden, passionate sex somewhere…maybe, but leave your bra on the whole time? Never).
Sex in games follows the same pattern, it’s based on fabricated, fake, idealised representations that never fit together with reality. Whether a game tries to be classy and treats you to rose petals and a romantically lit lake to bathe in with your date or it openly exploits sexual imagery and re-brands it as satire, the player is left feeling as though they are an outsider, a voyeur, watching something they shouldn’t be despite the fact games often try to make the player feel immersed, as though they are the protagonist.
The game series that (almost) managed to get the balance right was Mass Effect, Bioware made a point of ensuring all characters had different orientations, unique conversational dialogue and there were multiple options, sure these were ‘Yes’, ‘No’ or ‘Actually, on second thoughts, I’m gonna sleep with the blue lady’ but it meant the relationships developed closer to real life relationships, where you have to first get to know someone, converse with them and explore your options before getting it on with them. 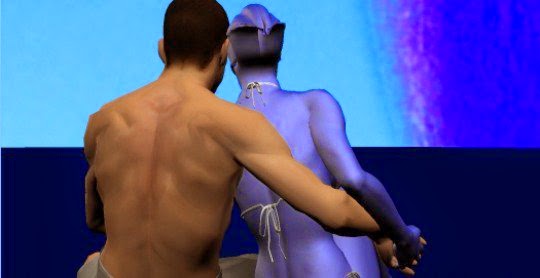 The relationship scenes in the Mass Effect titles and are better scripted than most. The developments felt organic (I genuinely felt attached to Kaidan. Go ahead and judge me, but I enjoyed my steak and Canadian beer dates, okay?! Food and honest conversation, that’s the way to my heart, damn you Bioware!) and I was invested in all of the characters.
Yet, something still felt off, after playing through all three games I came to the conclusion that this is due to the cliched nature of the prospective partners. For example there’s Kaidan; the brooding, dark haired, silent type with a tainted past is crying out to be loved and looked after. Or Miranda; the feisty, fiery, no-nonsense woman who is on the outset strong and unphased yet has major daddy issues. I won’t list the rest but in hindsight I realised all of the characters and their actions were made up of archetypes and tropes.
I often wonder if my being a woman has anything to do with my dislike of the portrayals of lust and sex in games due to the surreal, misogynistic nature of gaming as a whole. It’s always been about a man saving a girl, the world or the galaxy and so watching sexual content in games, for me at least is completely abstract as it’s often from the point of view of a man.
I sometimes feel embarrassed for my male counterparts if this is what they believe sexual encounters are actually like. Often it’s even laughable and yet it’s conveyed and presented with all seriousness, as though it’s completely normal.

Even titles based loosely in a real-world setting like the Grand Theft Auto games, who claim satire, exhibit sex in an at times grotesquely, honest way. Setting a game in a world where everything is based on reality, with the option to do things like yoga, go running, eat at fast food restaurants and drive around a landscape based on a real place or showing girls dancing in a strip club is fine.

Showing prostitutes at night, also fine. I often see them in a certain part of the town where I live if I walk around certain areas at night. I’m not blind to the fact they exist.

These things are real, they do exist and so when you are actually given the option to have sex in-game, and change the camera angle for a better view, the game is in some way telling you that the act you are seeing is true to life and that boobs are meant to bounce that way, women are meant to call out obscene, degrading things about themselves, men are meant to say nothing and grunt occasionally and women are always required to give oral sex and enjoy it.
Obviously, some women do, but the fact remains games like this are creating a weird, pseudo-real portrayal of sex in a real-life setting and this causes confusion, especially in pubescent kids who, despite the ratings system in place for games, still manage to get hold a copy.
Their expectations and views of sex can be sculpted by their in-game experience and that’s pretty messed up. Misconceptions like those can be dangerous because not everyone is intelligent, mature or rational enough to understand.
Maybe my main gripe with sex scenes in video games comes from the fact that sex and relationships are not games. Incorporating them into games somewhat invalidates them and detaches us from them. Pressing buttons during a quick time event to pleasure a character Gods of War III style is utterly bizarre and while controlling the pleasure of another person is possible through use of your hands (that’s a tip there for you, you’re welcome!), using a controller to simulate that action is rather pointless when you think about it.
No medium can accurately convey what sex is like. That is until Oculus Rift technology integrates POV pornography which I believe it has…though even then, surely that no longer becomes a game but a masturbation tool or a visual porn hub?

Media hype doesn’t help either, Fox News (why are you surprised?) accused Mass Effect of ‘full digital nudity and sex’ which is a complete lie. Hyperbole and mass hysteria caused by uninformed media types and concerned parents does nothing but worsen things, but that’s a whole other issue for another time.
If a decent portrayal of lust was possible then I’d have no problem with sex in video games, I’m all for pushing the boundaries of what a game could and should be, but it’s seeming less and less likely as games continue to become more like films.
To summarise, let’s continue the Valentine’s theme with another haiku from the heart;
Lust in life is good,
But in-game can not compare,
Happy Valentine’s! 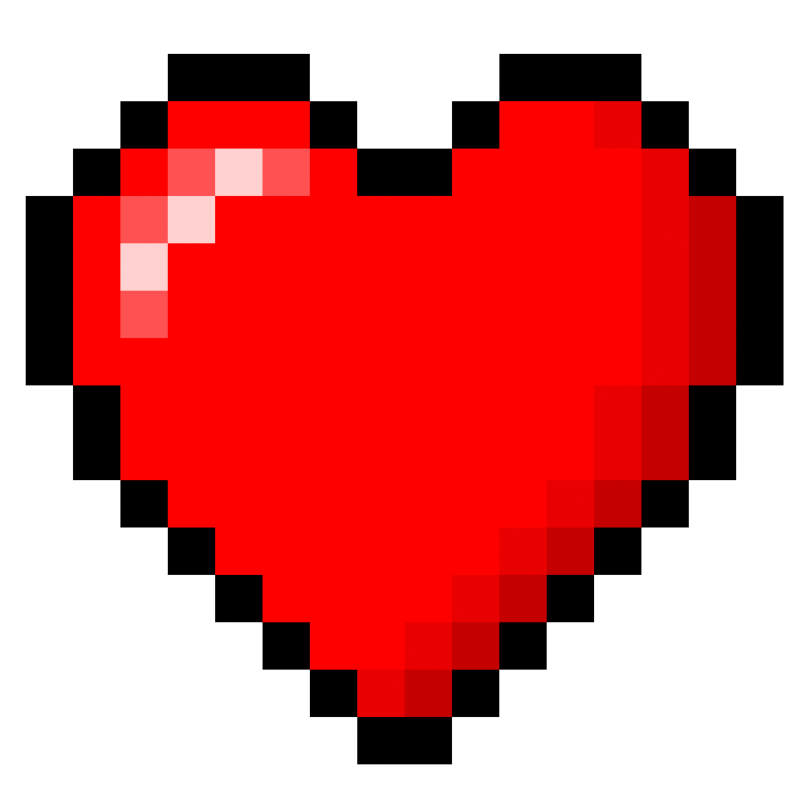