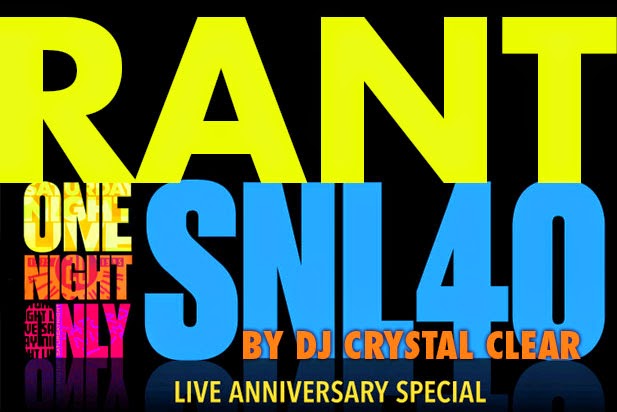 I missed the Grammys (I’m too old to care), and I will be back for the Oscars too.

Soooooooooo, tonight is the 40th anniversary of Saturday Night Live – I was 10 when it first aired, and I remember it very well. My Mom was excited to see it because GARRETT MORRIS was in the cast, lol.

Anyway, it’s old home week, the show will be THREE HOURS AND A HALF HOURS long, and EDDIE MURPHY will be back!    So, I turn on to check out the red carpet and who do I see? Eddie Murphy!

Ahhhh yes, Eddie. He’s the only cast member in SNL history to be the guest host WHILE HE WAS STILL A CAST MEMBER! And he’s the ONLY former cast member who NEVER went back to the show, EVER!

Anyway, he’s a kooky recluse, so I don’t expect him to say or do too much, he hates this kinda shit. 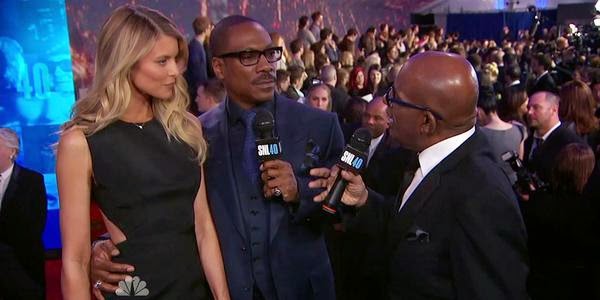 Eddie was holding on to his girlfriend for dear life – she stood totally still, with a frozen smile, did not speak, and was not introduced.

DAVE CHAPPELLE was snubbed by JB SMOOVE, he glided right by Dave like he didn’t even see him – which was odd.

CHEVY CHASE – He was really sweaty, seemed confused, and had a LOT of regrets – I thought he was gonna have a heart attack.

Three and a half hours starts NOW!

JIMMY FALLON & JUSTIN TIMBERLAKE do their infamous “history of” song gag, talking about all the famous SNL sketches, interrupted by RACHEL DRATCH as Debbie Downer and MOLLY SHANNON as Mary Katherine Gallagher –SUPASTAH! 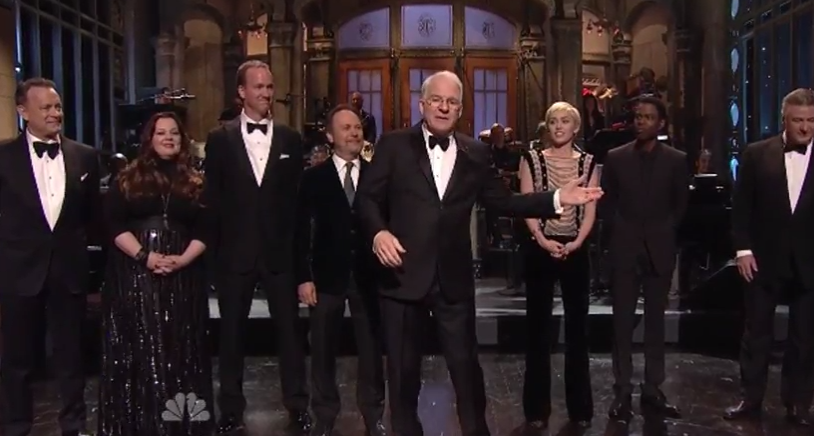 LOTS OF CLIPS and then…  DANNY AYKROYD – recreating the BASS-O-MATIC with LARAINE NEWMAN! 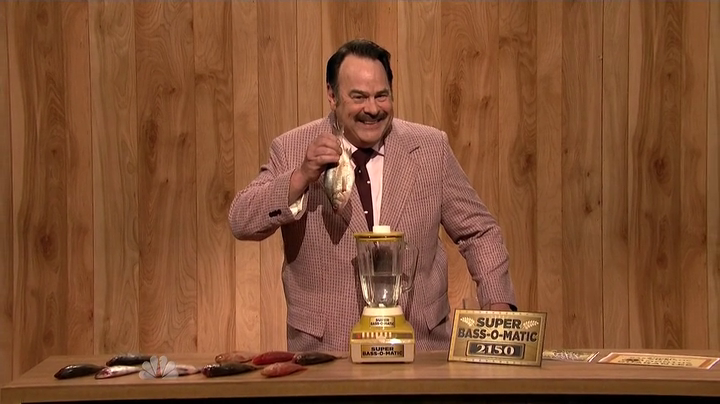 And, the old blender failed to work with two fish in it – hahahah!

JIM CARREY is Matthew McConaughey – and a great Cosby zinger – “Potent Potables” where he was the video clue, where made a drink!

Ooooh, audition tapes of those who made it, and those who didn’t! That was cool.

ROBERT DE NIRO talks about NYC, and then a montage of NYC stuff, post 9/11 stuff, and that asshole Rudy.

Annnnnnnnnd we’re back – KEITH RICHARDS (sans head wrap) introduced PAUL McCARTNEY, who sang “Maybe I’m Amazed” – he was straining a bit to hit the notes. Musta been that show he played last night at Irving Plaza. 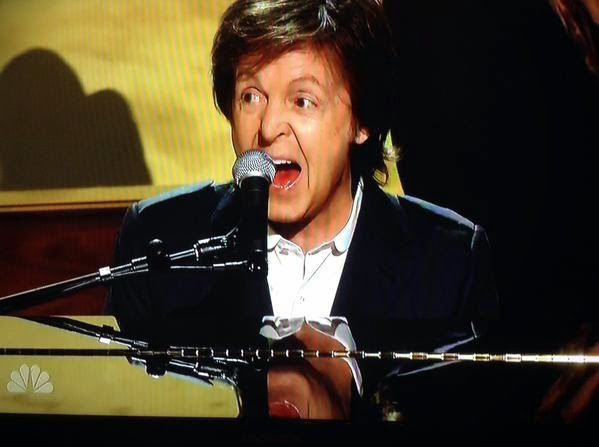 Annnnnnnnnd we’re back – JACK NICHOLSON! I’d love to see his point of view with those red lenses – here comes the political humor package – DARRELL HAMMOND is so good, I miss that dude – taking Don Pardo’s place isn’t enough for me. 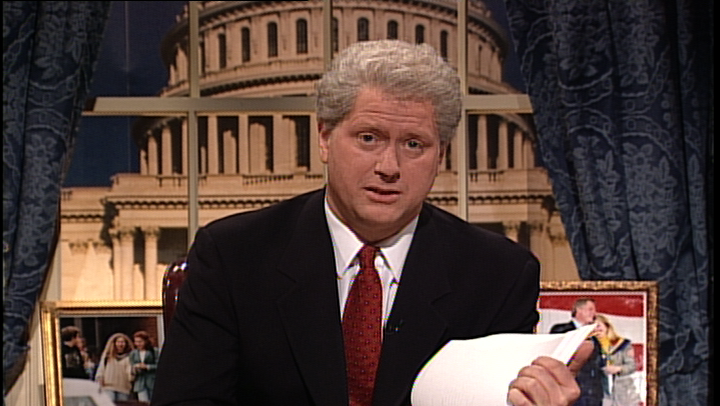 Oh, The Californians – I’m not a big fan of that sketch. – Oooh, LARAINE NEWMAN (Nobody clapped for her because nobody knows who she is, or they were stunned because they thought she was Stevie Nicks), KERRY WASHINGTON, BRADLEY COOPER, TAYLOR SWIFT, BETTY WHITE! Dang Bradley, way to plant one on Betty!

DAVID SPADE shows up at the end with the Flight Attendant “Buh Bye” – not good, no time to really let him get cooking with it.

SAY, WHERE IS JANE CURTIN?

Oh, THERE SHE IS, doing Weekend Update with AMY POEHLER and TINA FEY!

Sorry EMMA STONE, you STUNK doing Roseanne RoseannaDanna.   ED NORTON as Stefon? Pretty good.   MELISSA MCCARTHY doing Farley’s “Down By The River” bit, where she jumps on a desk and destroys it.

CHEVY CHASE comes out to talk (still sweaty and disoriented), and then GARRETT MORRIS does his yelling bit – awwwwwwwww 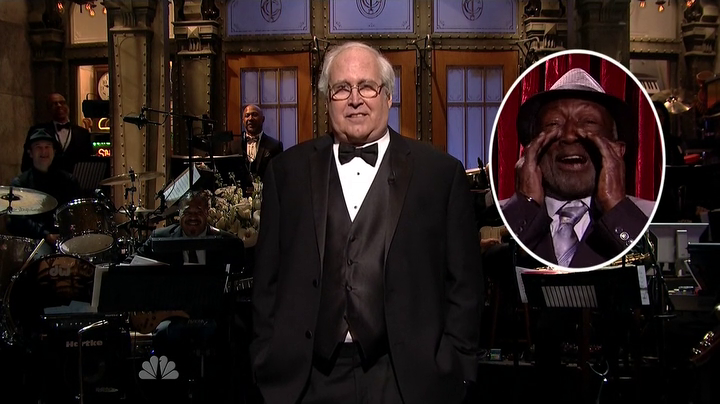 YAY, MARTIN SHORT! with MAYA RUDOLPH as Beyonce doing a bit about music + comedy together!

WILL FERRELL and ANA GASTEYER as Marti & Bobbi Culp !

KENAN THOMPSON – “What Up Wit Dat”

I just saw GEORGE LUCAS in the audience. 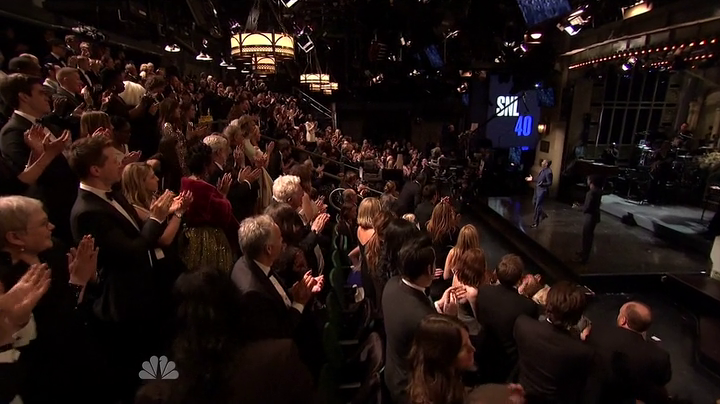 FIRST STANDING OVATION OF THE NIGHT! 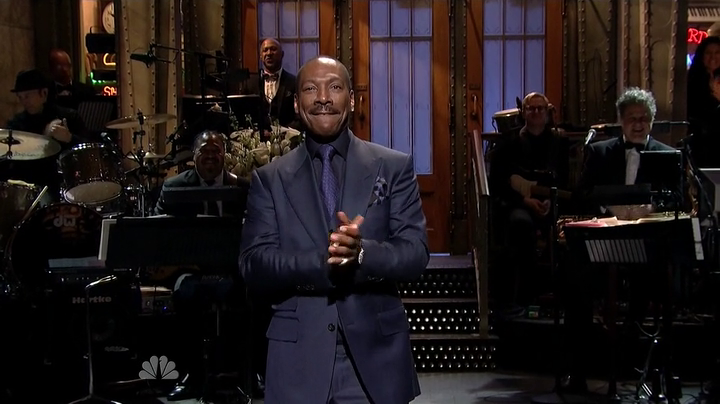 Murphy did exactly what I expected. He’s a nervous nelly, and HATES stuff like this, he’s a kooky recluse (I’ve got some stories) – frankly I’m stunned he talked that much. 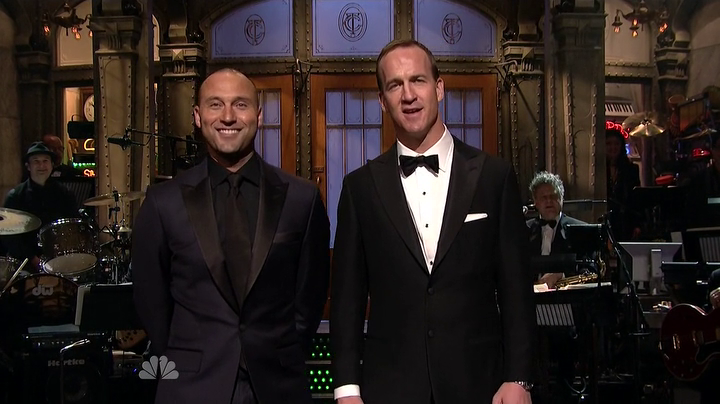 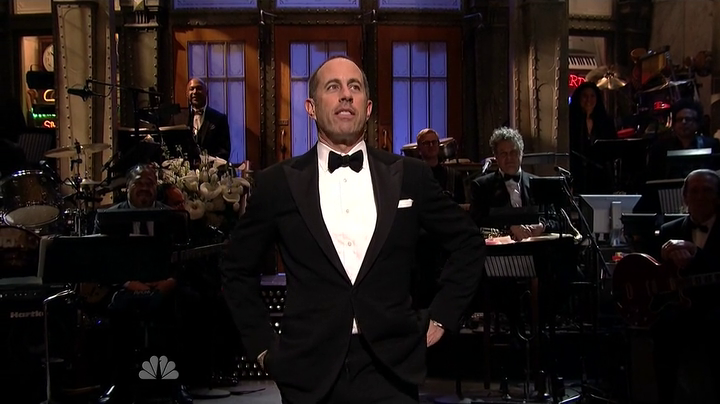 He opens with a Brian Williams joke, and to take questions from the audience – one of whom was SARAH PALIN. 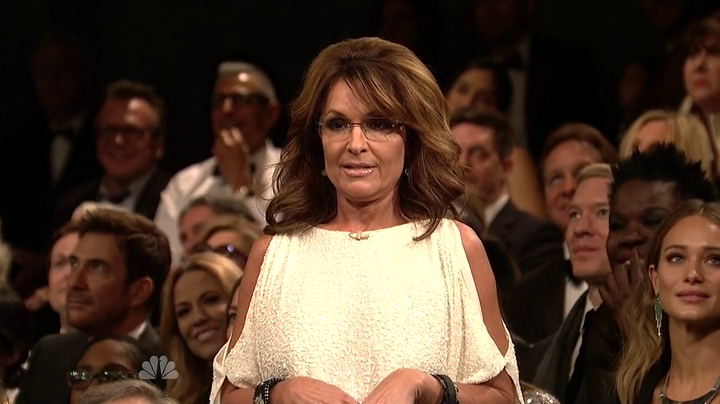 She asked how much Lorne Michaels would pay her to run for President – with Trump as her running mate – so I guess this means that she’s totally comfortable that she’s on the D list!

Also there was a little love fest between him and LARRY DAVID, of course. 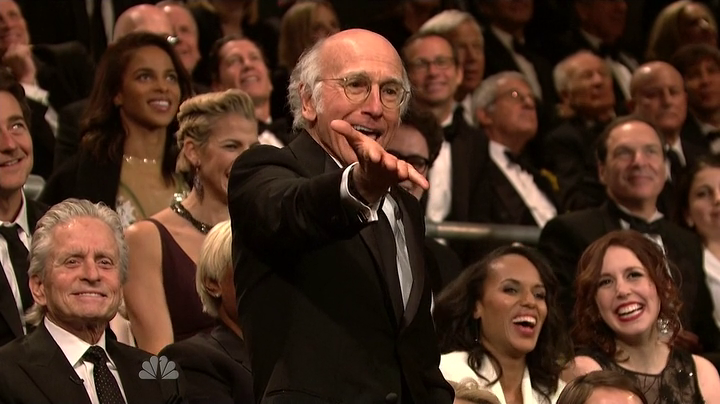 And Larry launches into how much more successful they are than anyone else in the room. 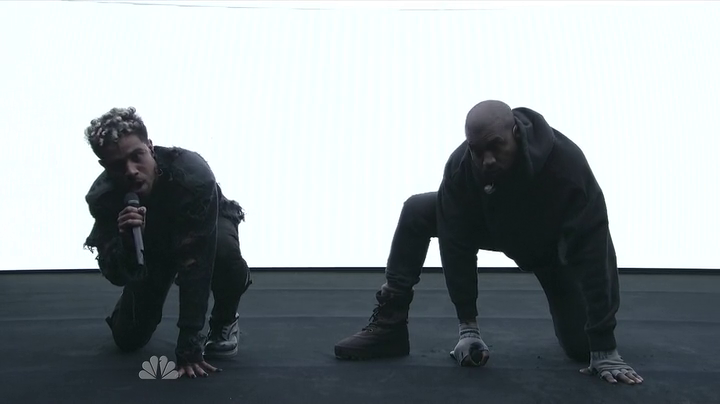 Kanye opened with a bit of “Jesus Walks” and then it turned into some kind of Performance Art piece in a light box – along with some woman who chooses to wear a HUGE Warhol-style/Cousin Itt wig with a Vidal Sassoon bob – (HEY Sia, Lady GaGa called, she wants her wig back!), and a dude with those horrible fake, pointed, black varnished “Vampira” nails that Rihanna and all the other young girls just love – bleccchh.

ZACH GALIFIANAKIS  comes out in Sia’s wig with a new ANDY SAMBERG short, with ADAM SANDLER – it was mostly about JIMMY FALLON and HORATIO SANZ cracking up during sketches, That’s When You Break – cute.

Nice little shout-out to TRACEY MORGAN. I really hope he makes it through.

Annnnnnnnnnnd we’re back – with the clips of the cast members, and other important people behind the cameras who died, including the JOHN BELUSHI clip about him outliving everyone else. It ended with JON LOVITZ – a gag because he was in the audience, flabbergasted. 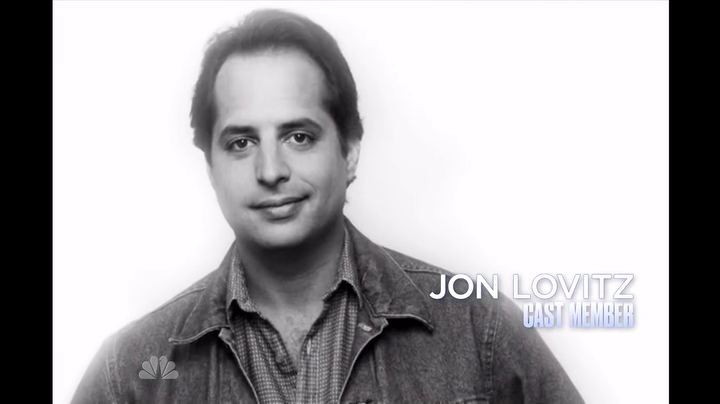 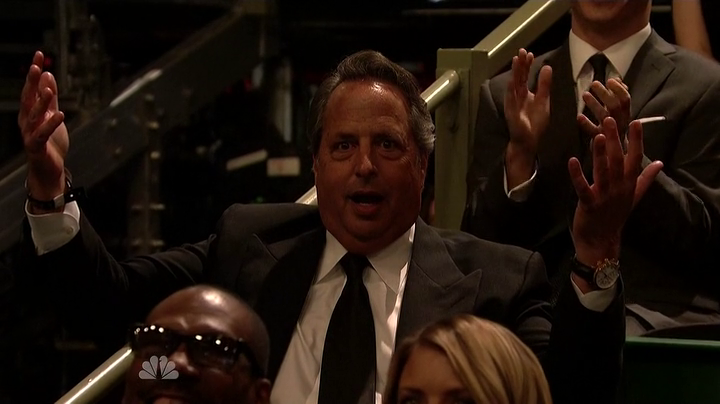 They still fit in their outfits! They gave Kanye a chance to jump on stage, but he didn’t. I’ll bet nobody will give him kudos for that.

PAUL SIMON introduces the band, (3rd standing ovation, after Eddie Murphy and the Crew of the show) then sings Still Crazy After All These Years – and his voice was a little pitchy dawg. 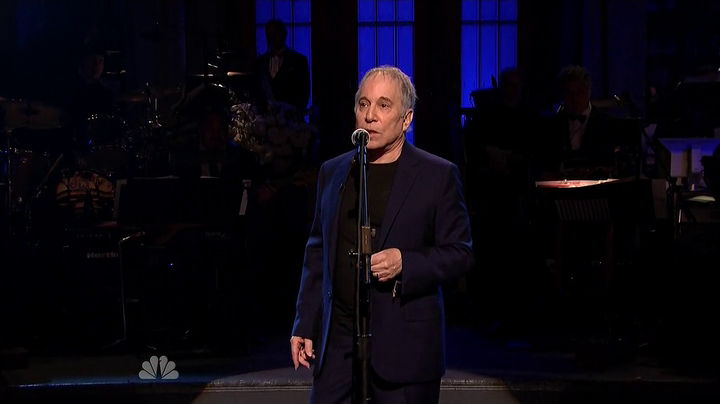 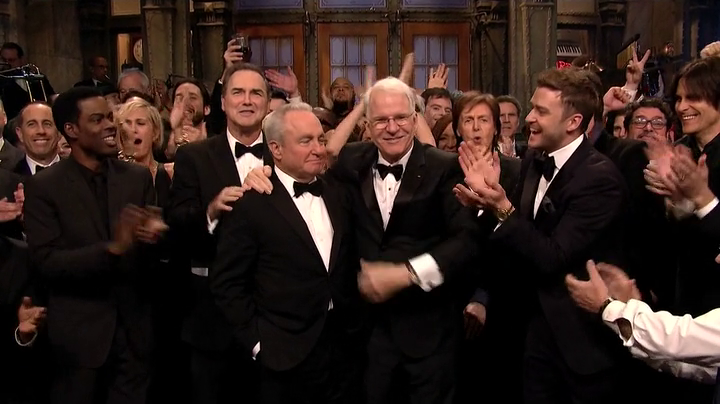 It was okay, the only person who made me laugh out loud was MARTIN SHORT…he’s always beyond fabulous. 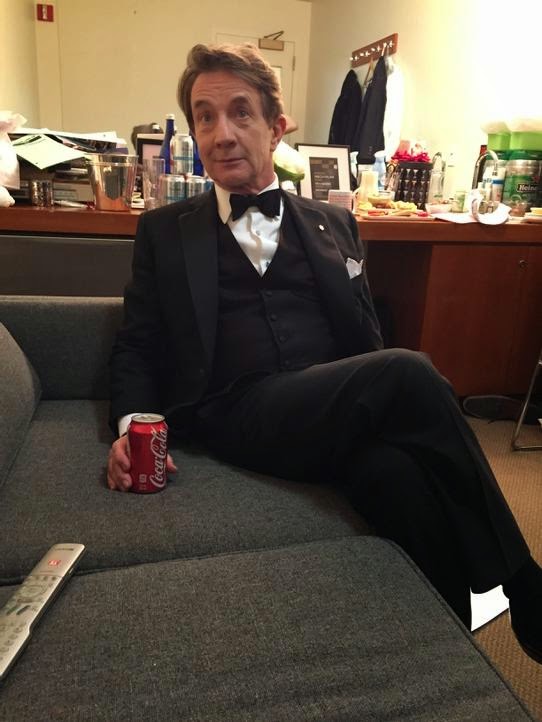 Thanks for reading, see you at the Oscars!