In Hollywood, one great idea can yield a thousand projects.

A single brilliant book at become a movie and its sequels, a television show or two, possibly a cartoon and few tribute songs.

One great idea can be the cash cow for thousands.

But not all great ideas continue to blaze forward, leaving a legacy of awesomeness. Some peeter out somewhere along the journey.

It takes a truly inspirational idea and an army of geniuses to give it momentum on all of its incarnations.

There are hundreds more on the horizon: Michael Crichton’s Westworld, which made it to the bigscreen back in the ‘70s with Yul Brenner is set to get the HBO red carpet treatment by TV’s golden child, JJ Abrams. Fox is developing Philip K. Dick’s Minority Report for the small screen, sans Tom Cruise. Robert Gordon’s Lemony Snicket‘s A Series of Unfortunate Events looks to get a small screen do-over after the disastrous Jim Carrey outing back in 2004.

With the right folks both behind and in front of the camera, a source material might stand a fighting chance of survival. Even projects that became big screen bombs can find a second life on television. But with the wrong writers, wrong actors and God forbid, the wrong timeslot, a favorite book-turned-movie-turned-primetime-potential might wither and die.

The best bet for any new project is learn the lessons from past successes.

Here are three that have survived the journey. 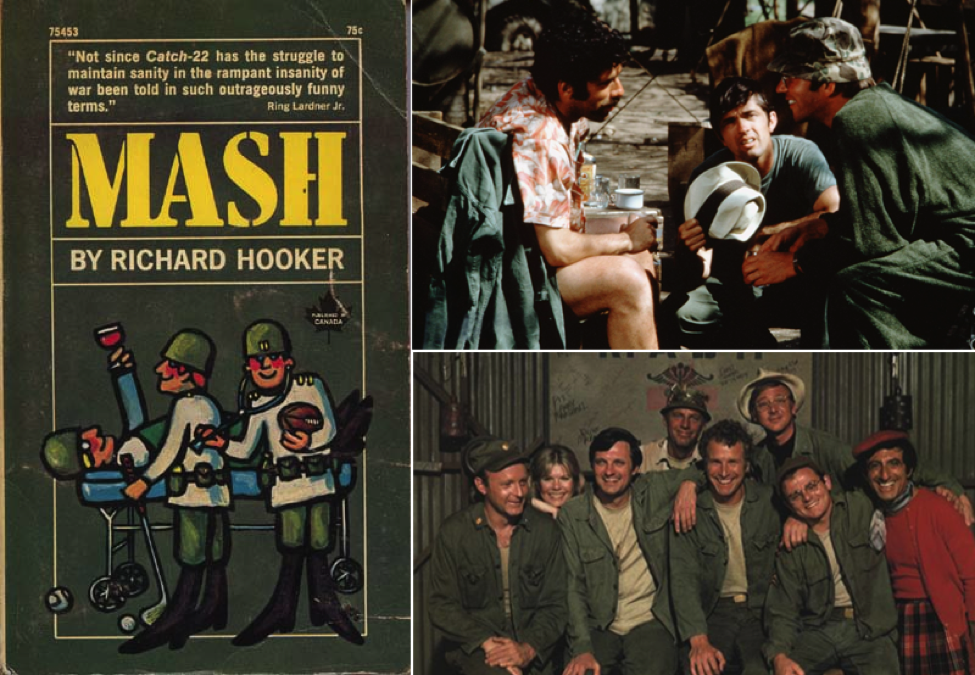 Book: Written by Richard Hooker (real name H. Richard Hornberger), MASH: A Novel About Three Army Doctors was a satirical comedy followed the antics of Swampmen Hawkeye Pierce, Trapper John McIntyre and Duke Forrest, army doctors performing meatball surgery under horrific conditions. Their pranks, their drinking and their taste for petty revenge put a human face on a military conflict not many know much about.

Movie: The story of triage trio whose insanity kept them sane during a wartime was adapted into a thinly-veiled commentary on the Vietnam Conflict set in during the Korean War. The 1970 Robert Altman classic went on to receive five Academy Award nominations, and won one for best adapted screenplay.

TV: For the small screen, the hijinks of three military surgeons became two as Southern doc Duke was left behind. The Alan Alda-starrer ran for eleven years, almost four times longer than the war it was set within. At some point during production, the show stopped aiming for Emmys and just set its sights on the Pulitzer. Over its long, long, long run, the show won 14 Emmys, eight Golden Globes (six of which were for Alda), eight WGA Awards, seven DGA Awards, four Humanitas Prizes, and a Peabody Award. 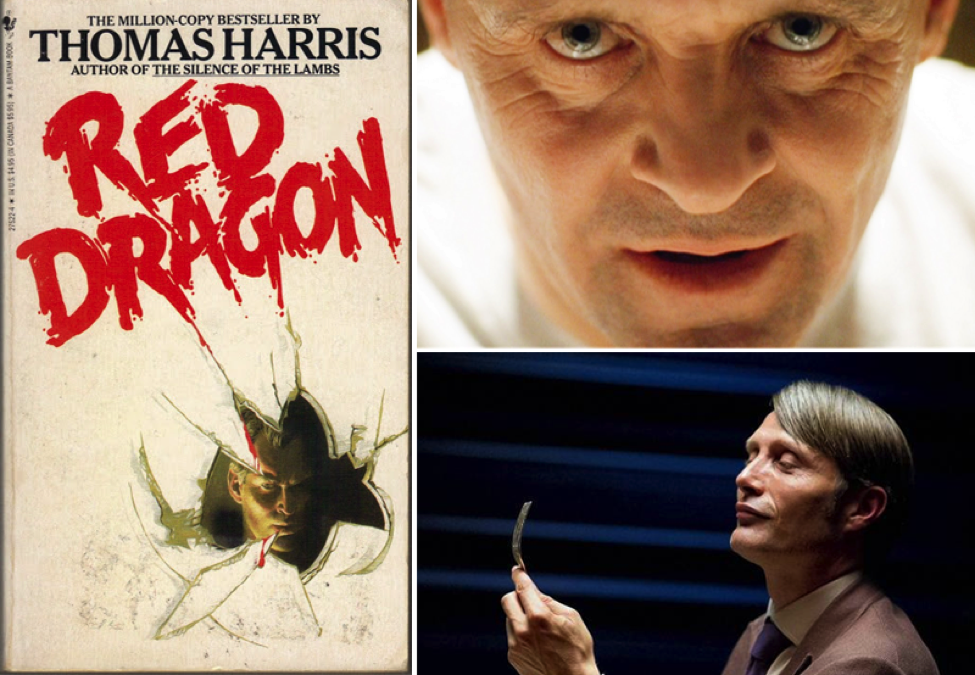 Book: Thomas Harris’ 1981 novel Red Dragon introduced the character of Dr. Hannibal Lecter on an unsuspecting world. While a somewhat minor character in Dragon, Lecter was allowed to spread his serial-killing cannibalistic wings and fly in Silence of the Lambs.  Follow-up books Hannibal and Hannibal Rising exploited the popularity of the character, and while they added interesting background info, did little for the series.

Movie: While Brian Cox did an admirable job in 1986’s Manhunter, his turn as the foodie doc with a taste for Census takers couldn’t hold a candle to Anthony Hopkins in Silence of the Lambs.

One of only three pics to ever accomplish an Oscar Sweep, Silence of the Lambs rose the bar on horror films. Hopkins himself took home a golden guy despite only having less than 20 minutes of screentime.

Other Hannibal movies ranged from good to unnecessary, but it was Silence that set the standard.

TV: Entering its third season, Hannibal was able to shake off both the naysayers and the shackles of Hopkins had set 20 years prior.

By casting the brilliant Mads Mikkelsen in the role, the Danish actor and his merry band of talented writers redefined the character into the modern age, bringing a new range of abilities and new level of evil to Hannibal. 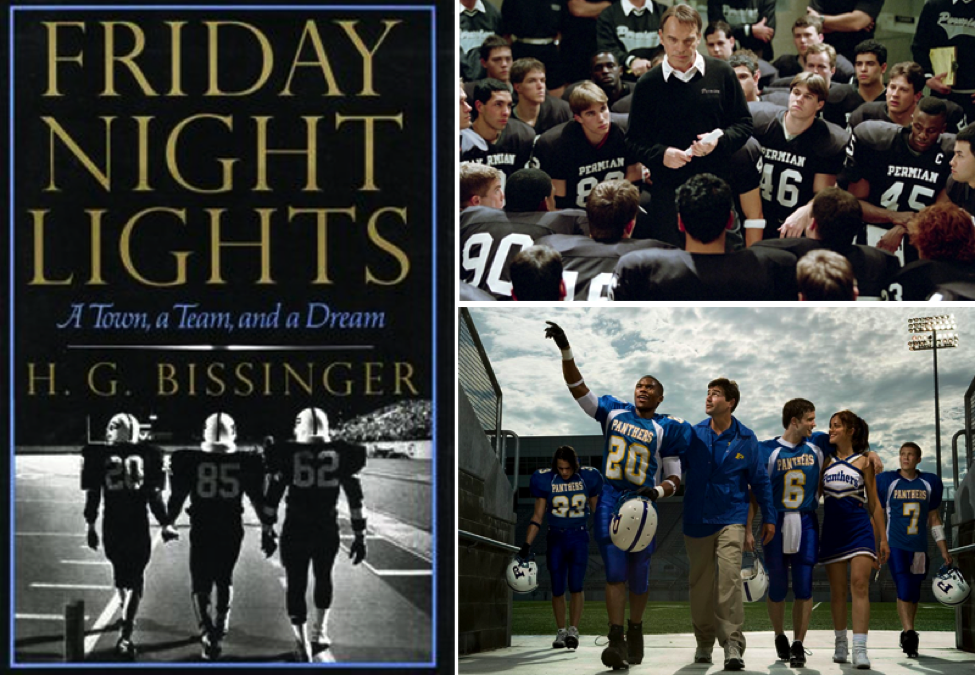 Book: When Friday Night Lights: A Town, A Team and a Dream by H. G. Bissinger first hit shelves in 1990, the novel wasn’t just another sports novel about a group of underdogs. Instead, the page-turner offered an accurate and often cutting look at life in small town Texas.

While the book might have turned the Pulitzer Prize winning Bissinger into the most hated man in Odessa, the tome was a smash success.

Movie: The Permian Panthers and the football fanaticism of Odessa took to the big screen in the 2004 drama directed by Peter Berg. The pic did an admirable job of focusing on the corruption of a small town that worships at the altar of high school football.

Starring Billy Bob Thornton, the feature film won rave reviews from critics and audiences alike, including the citizens of Odessa, who didn’t seem to mind the pic as much as the book.

TV: Friday Night Lights spawned two small screen adaptations. A young Ben Affleck starred in the first adaptation, Against the Grain. It only ran for two months before NBC pulled the plug on the sports dramedy.

After the success of the movie, Friday Night Lights was given a television reprieve by the Peacock with a second attempt at primetime glory in 2006.

While the show was never able to capture a sizable demographic, Friday Night Lights was hailed as one of the best scripted television shows of all time. The drama would go on to win the Peabody Award, a TCA Award and a handful of Emmys. Yet the show struggled during its first two years on the air.

In its third year, the show jumped to DirecTV’s 101 Network where it would live for three more seasons. During its third season, the show nabbed Emmys for lead actor Kyle Chandler and scribe Jason Katims.

Next time, a look at those who died of dysentery while on the Hollywood trail…