In a world of where Avatar is the highest grossing film of all-time, Star Wars is making a huge comeback with five officially slated films, Guardians of The Galaxy being the breakout hit of 2014 and a fifth Transformers film on the horizon I think it’s safe to say that audiences are embracing sci-fi fantasy material more than ever.

It’s crazy to think that studios have some really interesting science fiction material in their laps and aren’t putting them into production right this minute.

There are three projects currently stuck in development limbo that could easily find audiences and make huge impacts on the genre itself. 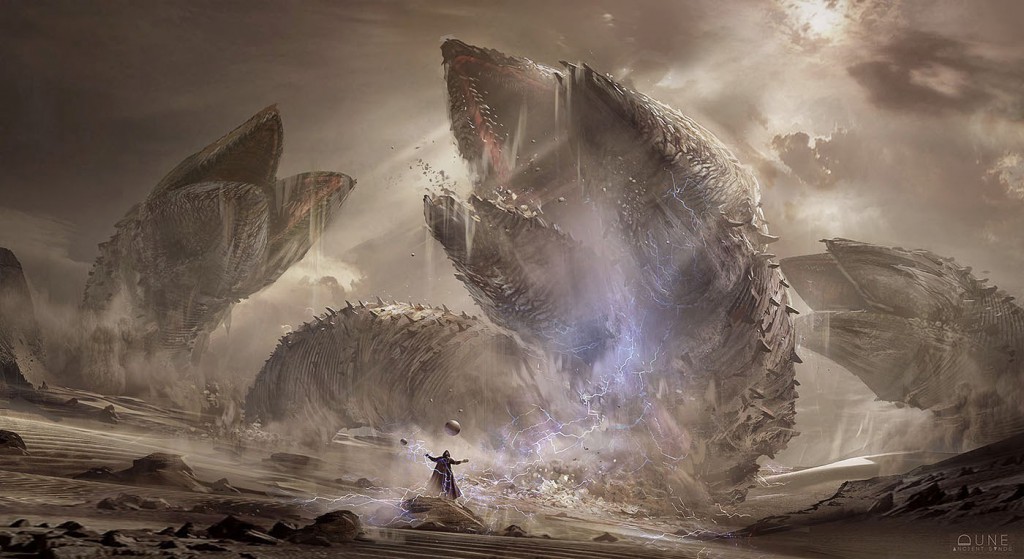 Paramount had been trying for ages to develop a new feature film version of Frank Herbert’s Dune. It seemed to get rolling when directors like Peter Berg (Lone Survivor) and Pierre Morrel (Taken) got involved, both would eventually exit the director’s chair. The project would eventually disappear and we haven’t had an update in a long time, until the studio admitted it was dead.

The amazing documentary Jodorowsky’s Dune follows the original failed attempt to make the film in the 70’s. In the documentary the filmmaker makes a good case to actually use his material as is but with an updated cast of course (many are now long dead).

It should make fans furious that someone hasn’t optioned his work to turn that into a film or at the very least try to improve on the mess of a film David Lynch made, even though I still enjoy that movie a lot I can agree it’s not great.

Even the television mini-series proved the material was solid and just needed a better story teller or someone who could work on that scale.

Jodorowsky’s huge artbook included a majority of it’s hand-drawn storyboards and most of it’s production design (costumes, sets and vehicles) were sent out to studios and shockingly rejected, only to see a bunch of the sci-fi film community stealing his ideas including George Lucas and many of his concept artists for Star Wars.

H.R. Giger’s work on the failed film also caught the attention of the people putting together Ridley Scott’s Alien. Giger’s work for the film is batshit crazy and I’d love to see on the screen someday.

This material still hasn’t been adapted to the standard it deserves and it could even rival something like Star Wars if put in the right hands, the world is so rich and worth exploring on a grand scale. I’m kind of hoping Paramount wakes-up from their Transformers and Ninja Turtles coma to get this fucking made.

Here’s some of the concept art Paramount had put together for the remake by artist Jock (Dredd). 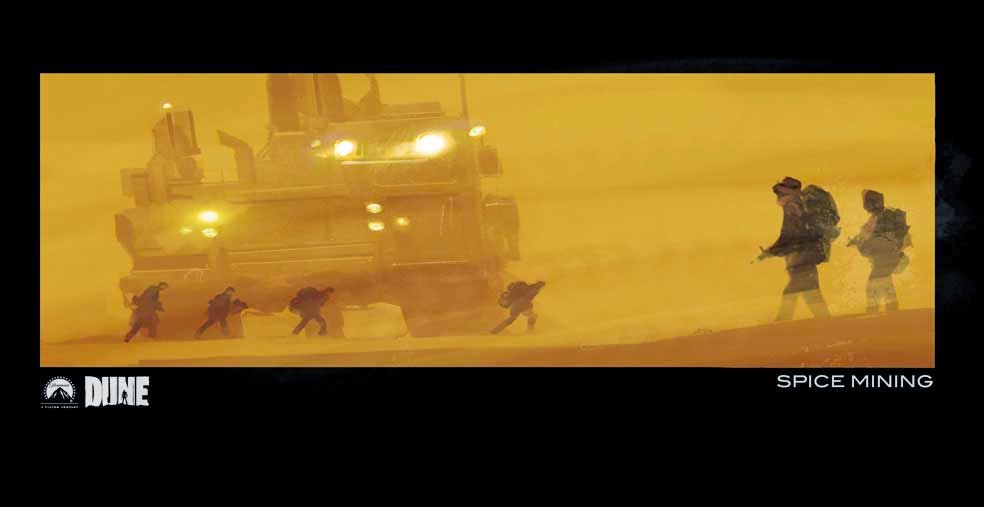 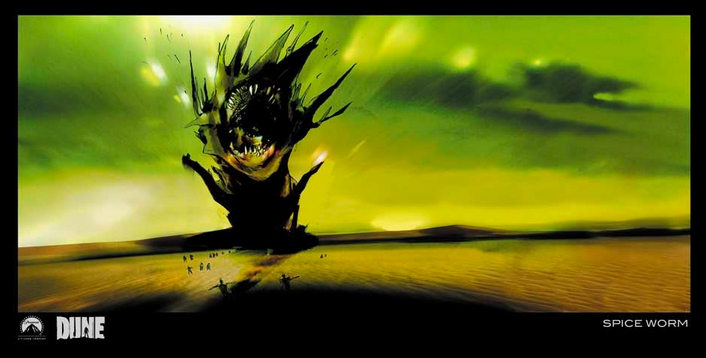 Check out this extra concept artwork from Feng Zhu and Eduardo Pena posted by i09. 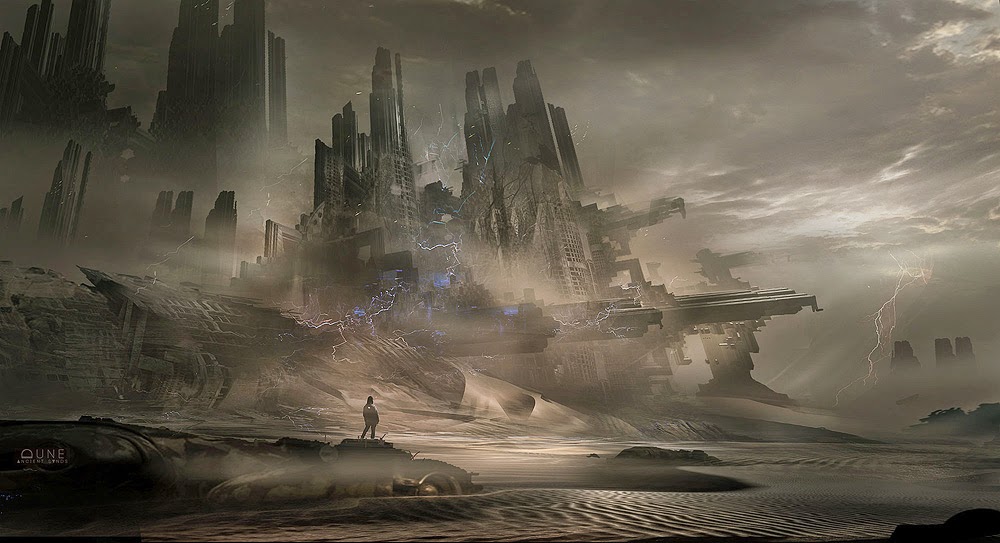 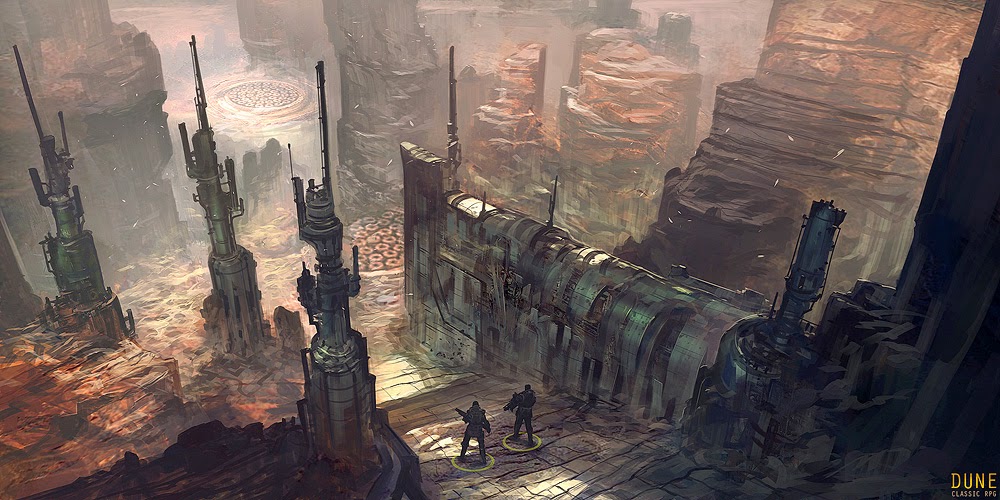 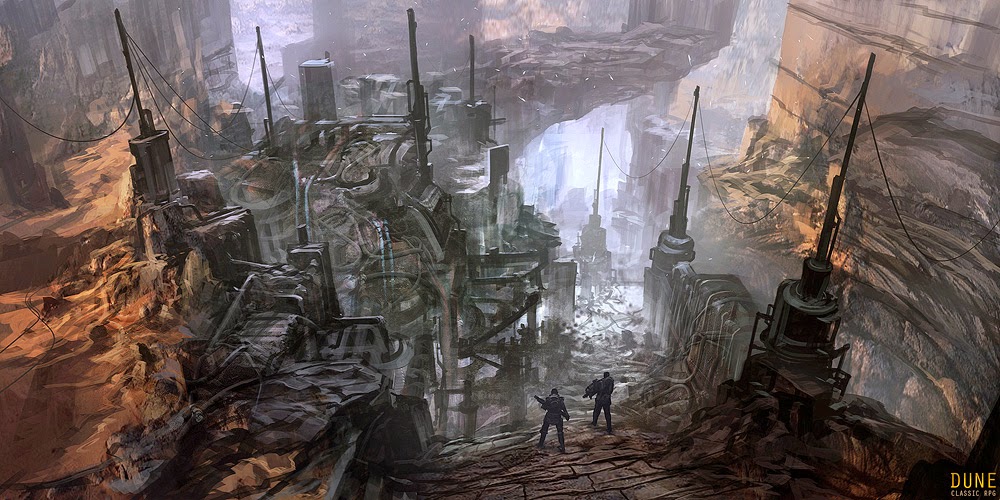 20th Century Fox tried to get a live-action film based on the anime series back in 2008-2010 hiring Peter Craig (The Town, Bad Boys 3, Hunger Games: Mockingjay Part 1) to pen a script, it would undergo many rewrites but ultimately was shelved by the studio.

Considering films like Guardians of The Galaxy and the return of Star Wars I’m shocked that talk of bringing back Cowboy Bebop into development hasn’t been making the rounds. The project was widely supported by it’s rather large fanbase and even had Keanu Reeves attached to play the lead role of.

Apparently, the reason like with Dune came down to budgetary restrictions and Reeves even said the film would end-up costing huge amounts of money even by Hollywood standards. After costly gambles like John Carter and Green Lantern losing studios hundreds of millions in loses due to their skyrocketing budgets you can understand why the priority might be to keep a manageable budget as these studio people want to keep their jobs.

Then again, if you can find a director able to keep effects costs down like a Neill Blomkamp or Gareth Edwards who have digital effects background then the film might not need a bloated amount of money to pull-off an ambitious script.

I think this material is going to be a hot commodity very soon, let’s hope Fox comes to their senses and figures things out to get it into production. 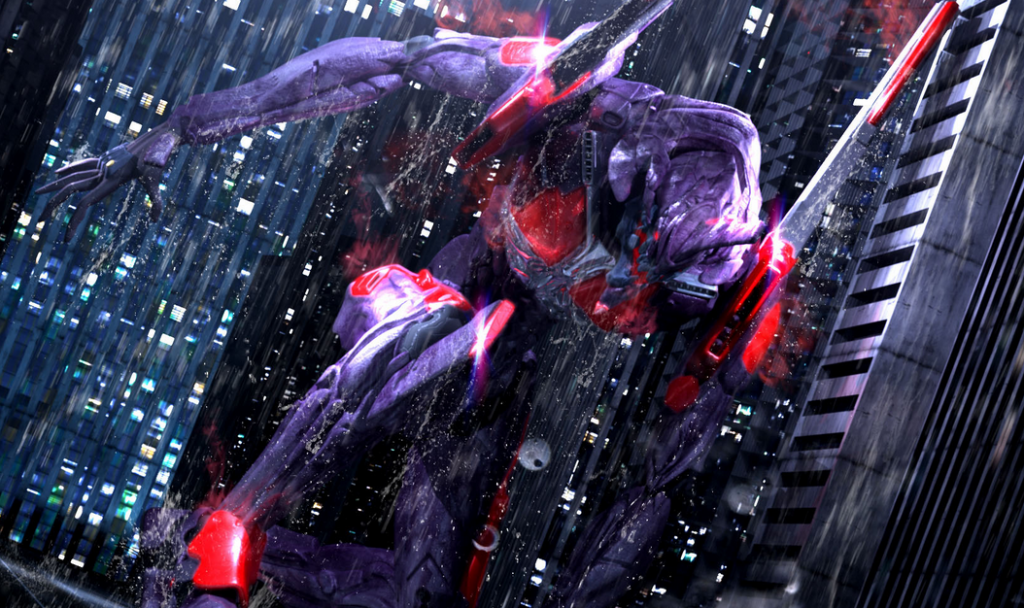 Evangelion has a bit of a tricky backstory since it had a live-action film in development but the people originally developing it didn’t have full film rights to it. Hence the project never saw the light of day even though a bunch of concept artwork had been commissioned by Weta Workshop in New Zealand. The rights have seemingly been cleared-up but hasn’t found a home.

Hollywood is starting-up it’s obsession with anime/manga material and it sort of started with Edge of Tomorrow (based on book that was turned into manga) making waves last year. Along with studio projects that include Ghost In The Shell, Akira, Robotech and even Astro Boy in the works.

It’s also hard to ignore that Guillermo del Toro’s Pacific Rim was greatly inspired by material like Evangelion. That film is spawning sequels and it didn’t have an existing fanbase supporting it just audiences hungry for this type of genre to be shown on screens.

We’ve seen that Warner Bros. is open to this kind of material originally partnering with Legendary Pictures to make Rim, only for it’s sequel to go off to Universal. This could easily be it’s replacement franchise becoming a giant-fuck-up to Legendary.

Since the comic book genre is almost picked-clean Hollywood is already looking into developing video games, anime and manga source material into live-action film franchises. I expect we’ll start seeing studios scrambling to get the rights to the bigger anime and manga projects, like Evangelion.

AICN posted a bunch of concept artwork Weta Workshop had been developing for the live-action adaptation. Weta of course already having a strong connection with Warner Bros. thanks to both the Lord of The Rings and Hobbit trilogies. The company is also said to be greatly involved with Batman v Superman, continuing the relationship with a project like this seems like an excellent parring. 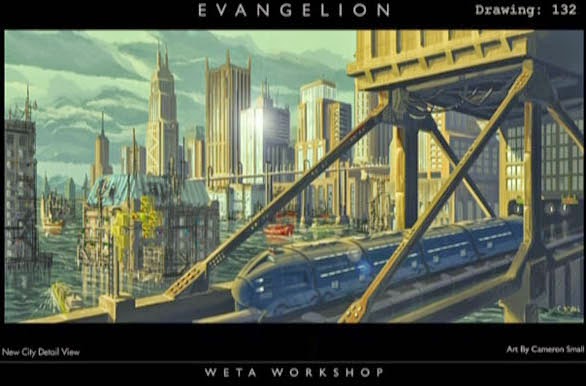 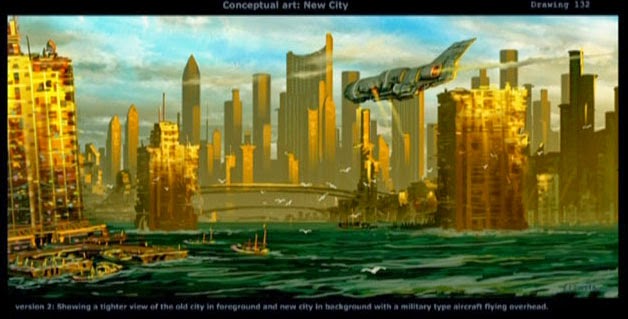 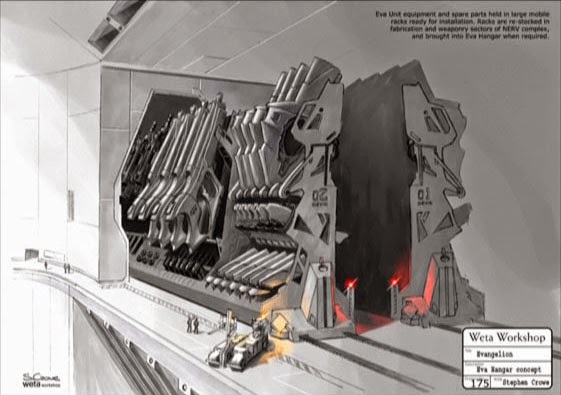 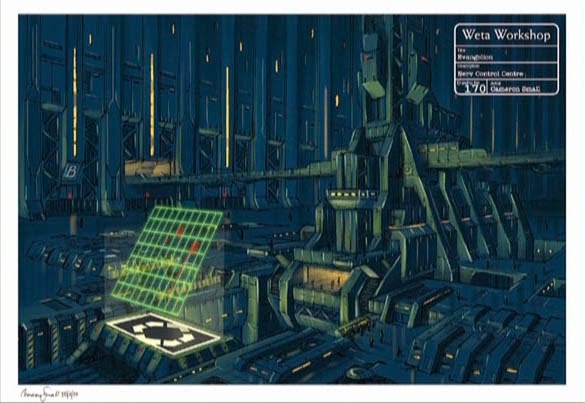 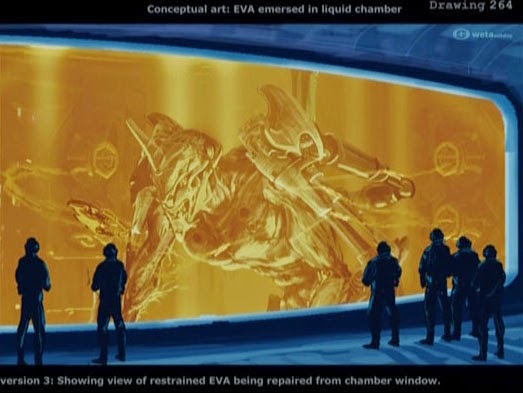 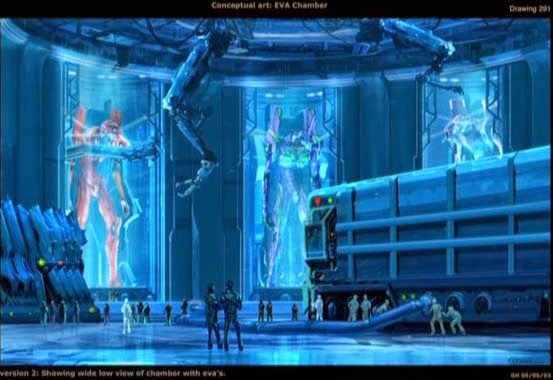 Will these films ever see the light of day?

That remains to be seen and I’m sure once studios start backtracking at the projects they laying-around they’ll start rethinking their previously decisions.