I’ve never really mentioned prosthetics or special effects makeup in very much detail in any of my columns before.

It isn’t something I have done much of myself, because for those amazingly realistic finishes you see in the movies, it takes time, practise and wisdom that only comes from experience.

Special effects makeup itself is an art form and can really make a movie, so I sincerely apologise for overlooking something so vital to cinema and costume until now. 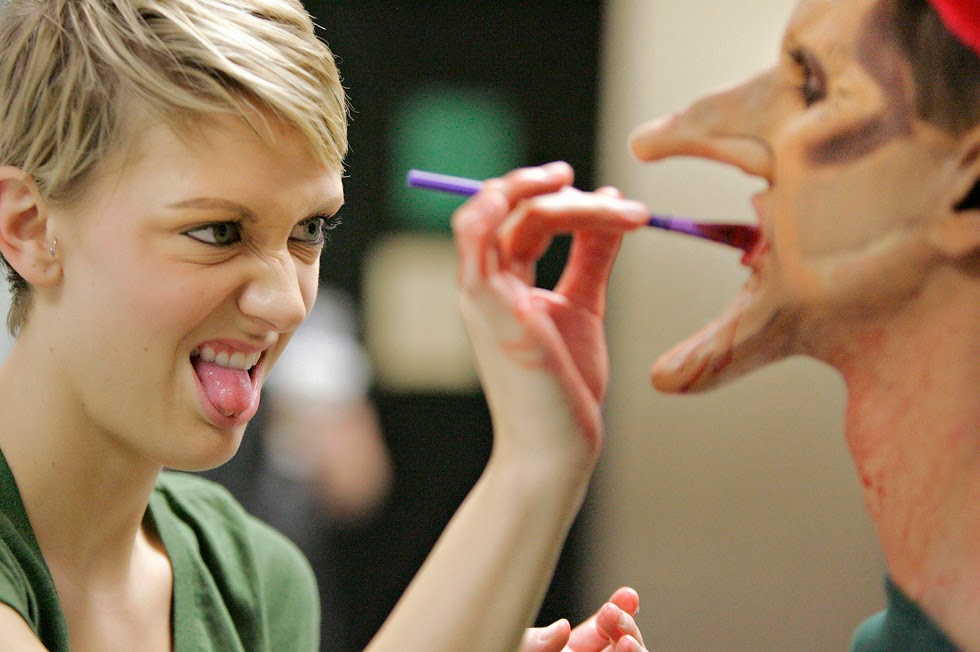 In terms of SFX makeup, 2014 was a good year. X Men: Days of Future Past, Horns, Dawn of the Planet of the Apes and I, Frankenstein, for instance. all had some cool makeup that looked impressive on screen and has probably left some cosplayers itching to try it out for themselves.

The award winning He Took His Skin Off For Me, a release from last year that may have slipped under your radar, has probably some of the best SFX makeup a budding cosplayer can hope to learn from. It’s basically a Kick Starter funded, gory and touching 101 of the human anatomy, and their website even has a link to “how to” tutorials.

If makeup for film and special effects is something that interests you, or you just want to be grossed out and moved at the same time then you should really see this short.

I managed to get hold of the sculptor and artist Thomas Smith, known for his work on Thor: The Dark World, Dark Shadows, Maleficent, World War Z and Ridley Scott’s recent Exodus to ask him about his creative input on He Took His Skin Off For Me.

Little Sofi: So what can you tell me about the makeup process for He Took His Skin Off For Me?

Thomas Smith: The process was intense, really intense. Sometimes the shots only needed a few pieces to be applied, maybe just the face or legs, but on a day when the whole body had to be in shot there was at least 2 of us at any one time applying the pieces onto Seb (the actor) with Jen (the head of SFX) checking that each piece was in the right place.

That meant referring back to a mannequin mapped out with all 120 individual parts…confusing! The first couple of hours went by pretty fast but after the fourth Seb was clearly uncomfortable. Sitting still for 8 hours while people prod you in the eyes with adhesives and brushes understandably took it’s toll on him. 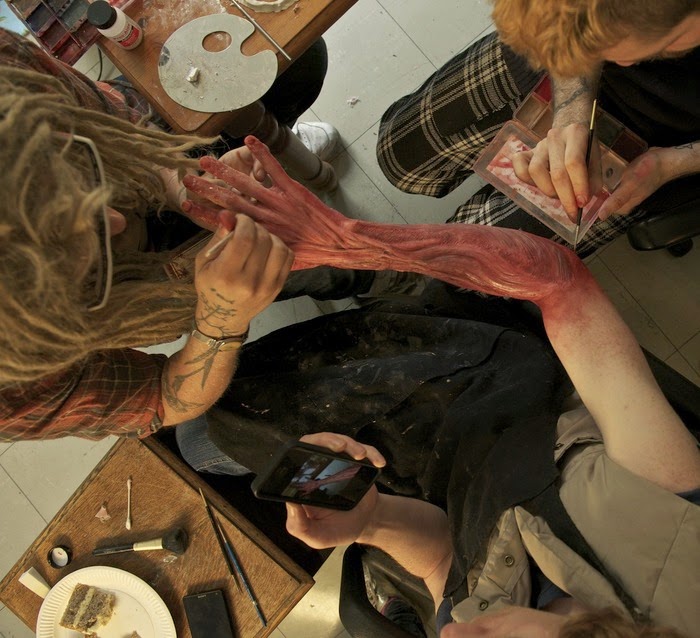 With prosthetics like that, do they wear well or are they delicate and fall apart while shooting? I know in some cases you always need to have your hair/makeup/whoever on standby to touch things up. Or was it fairly hardy?

Most people think you just put them in a box and use them again.

Nearly every piece was one time use only, especially around the face and hands. In some parts they were only 2 or 3mm thick and wanted to stick to everything apart from the actor. Because they had to move like real flesh, each one was basically a suspension of goo (deadened silicone) trapped between an airbrushed layer of bald cap plastic. A small rip in the outer layer and it all starts to seep out, which meant one us had to be watching non stop for pieces that needed a retouch. You can make awesome pieces without deadening, that’ll give you maybe 10 applications if you’re careful. 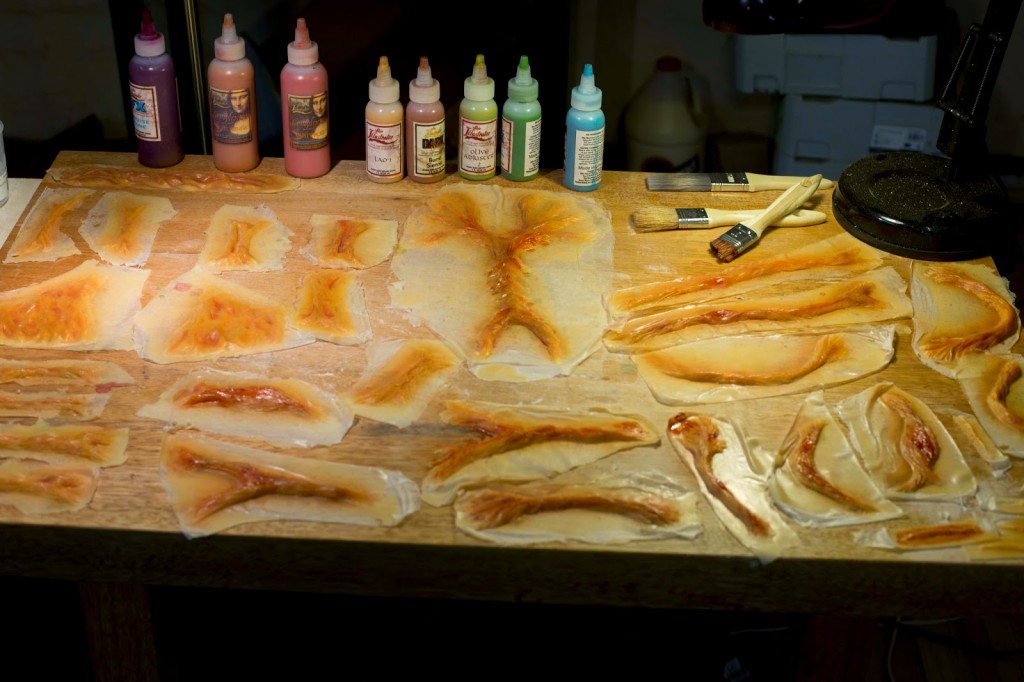 That all sounds pretty gross.  What other kinds of materials did you have to work with?

Watching what pretty much looks like parts of someone’s face sloughing off can be a little unnerving.

Nearly all the pieces were run from flat silicone moulds that had been taken of the sculpts we’d done earlier. Silicone is really the only option for the amount of detail we wanted and the flexibility. The problem with that is that we then had to pour silicone into those…

Silicone loves sticking to itself so we had to add a release agent super carefully, any missed spots meant it would stick to its self and ruin the mould and we’d have to start over. That was the biggest pain by far. The easiest was the skin illustrator, an alcohol activated make up that’s water proof. Everyone working on the prosthetics did an amazing job with the colours and pigmenting.

Are there any affordable products you’d recommend?

Everyone seems to radiate towards latex as a last minute fix, but it’s so hard to get a nice finish with. It wrinkles up, peels off and is over done by anyone that’s ever made a budget zombie. A little bit extra will get you something like Mouldlife’s Sculpt Gel.

That’s a really good intro into the world of silicones, catalysts and deadening. It’s basically a small-scale silicone system that lets you adjust the hardness and pigment, and it’ll stick to you for a full day no problem. Plus, you can colour over the top of it. 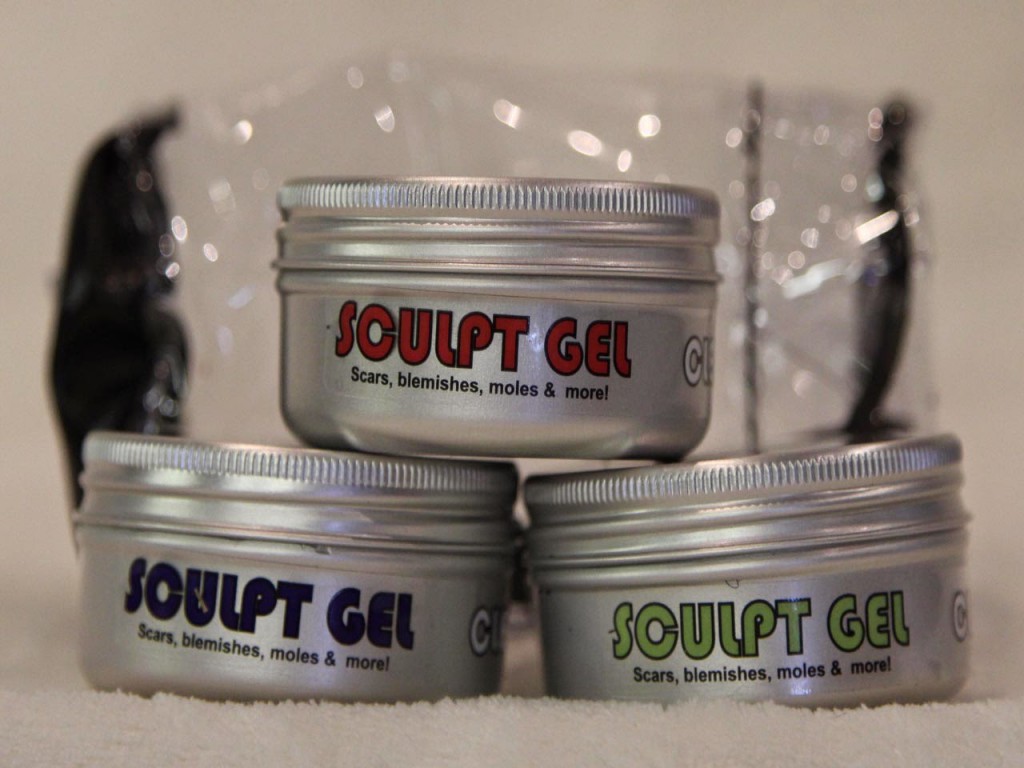 What advice would you give to someone making prosthetics for the first time?

Don’t be a afraid to fuck up. I used to get really embarrassed if I was making something and it didn’t turn out right. I’d hide it or throw it out but that’s the only way you learn. Reddit has a lot of really good places to pick up basics, or even just have your work looked at by people impartially, especially r/makeupaddiction.

It’s not going to look amazing straight away, it takes time. Experiment with things and see what happens, just because it’s always been done a certain way doesn’t mean you have to do it that way.

Also Halloween is the perfect time to practice on everyone you know.

What was the best part of the He Took His Skin Off For Me? ?

The people were the best bit by far. Everyone on the project was doing it for the love of making things. It was super long hours and incredibly stressful at times, but everyone helped each other out and cheered each other up when someone was down. It was like a tiny temporary family. The downside was the pile of ruined clothes I had to kick out after being covered in different shades of blood red.

Nice.  How did He Took His Skin Off For Me? compare to other things you’ve worked on?

There was a lot more free reign to explore different ways of doing things on this job. Normally you’re surrounded by people that liaise with designers and art directors, then report back to you with a small designated job. You’re a part of it but only really in the one task you’re given.

With this, it was completely involved on every level from the get go; the look, the process, the colours. Everyone had a say in how they thought it could be improved which meant the finished piece had a little bit of us all in it which made it really exciting. Without everyone all sharing ideas and techniques we never would have achieved such an awesome end result.

What has been your favourite project to work on so far?

I think Tim Burton’s Dark Shadows will always be my favourite. It was the first job I got after leaving university, so I was completely in awe of everyone and everything. I still can’t believe I got to work so closely with Chloe Moretz, Kick-Ass was my favourite film at the time. 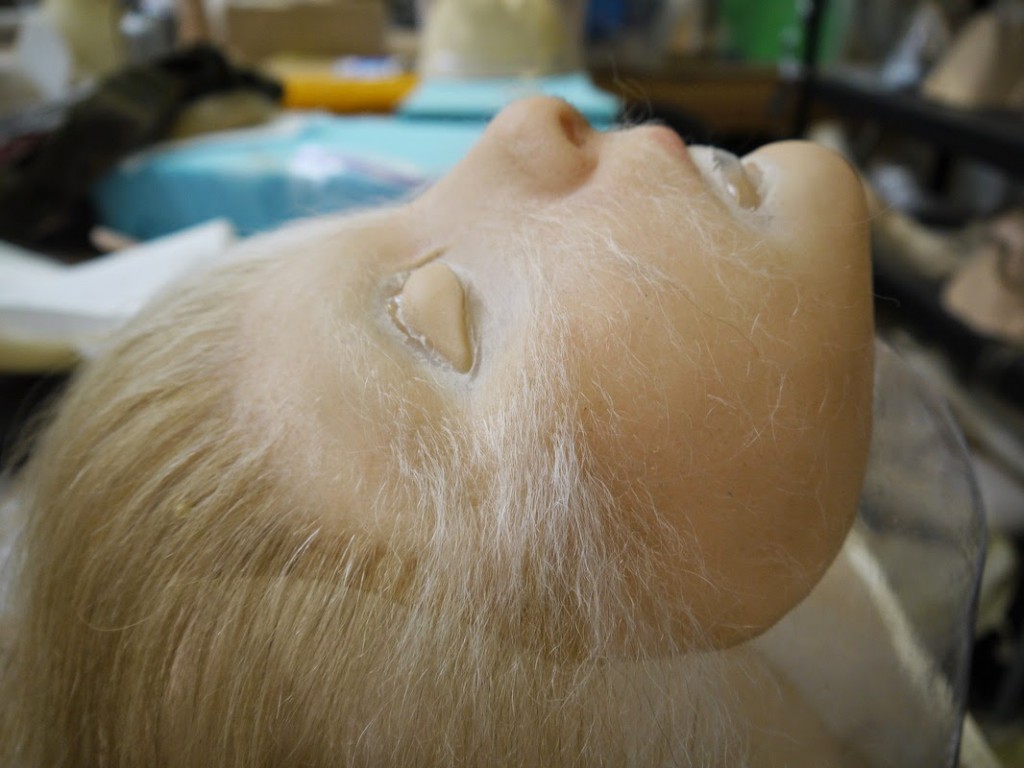 Yeah it’s one of my favourites too.  Are there more time constraints and things working in a big studio environment like that?

Surprisingly there’s a lot more time working on a big production than smaller ones.

On a large-scale production each decision has to be signed off by so many people that the rate of work can be pretty slow at first but then really ramps up once the shoot date creeps in.

With small low budget projects, everyone’s really trying to get as much done as quickly as possible and for as little money as possible.

Stressful for sure, but it means you have to quickly come up with workarounds or new ways of doing things that gets everyone really fired up and excited.

What would be your dream job? Like the best film you could get asked to work on?

My dream job would have to be Jurassic Park… Getting paid to make dinosaurs and the possibility of seeing Jeff Goldblum? Fuck me, that would be amazing! Mad Max would have been fun to work on, anything featuring dinosaurs or a dystopian future really. 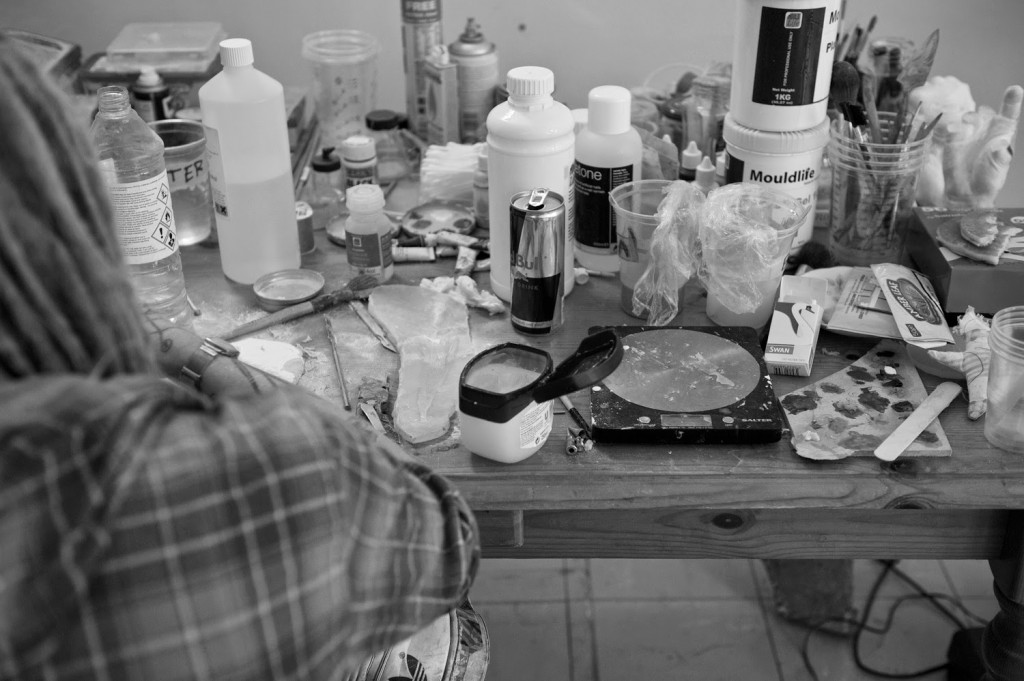 Tom is working on a few movies to be released in 2015 and 16, so look out for his sculpting work in Pan and Jungle Book.  To know more about how he works his magic and learn how to try it yourself, check out Tom’s He Took His Skin Off makeup tutorial HERE.