Of late, I’ve been pondering over whether HD remakes of classic games are a good thing, specifically for whom.

While I would love a high definition version of Final Fantasy VII which will be completely faithful to the original and more importantly unchanged, (it’s not going to happen, sorry guys) I don’t need one because there are so many more games and new releases to play.

Yet, time and time again I yearn for remakes or indulge in updated versions of the same game because of their nostalgia or because I enjoyed the original incarnation of a game so much that I can justify paying for a shinier version of it for my new console.

Ultimately, most remade games have very little difference, it’s the same as the original but with better graphics and sound quality and in some cases better engines or updated game mechanics.

This difference, no matter how inconsequential it seems will undoubtedly fail to capture the very essence of the game it is imitating precisely because of these differences, no matter how subtle.

You can never have the same experience twice.

There’s also the fact that if you’ve played it before, you will be playing a newer version of it objectively, which alters your perspective of the game. Second time round I know the ending, I know the characters, it’s familiar turf and because of this, the way in which I play the newer version is altered.

I was one of the people who bought Halo: Combat Evolved Anniversary and admittedly, unlike most other remakes, it included a cool feature where you could switch between the old graphics and the new, highlighting the work that had put into it and also giving players the option to play the game as it used to be.
I really enjoyed that feature, though admittedly, I did spend most of the game getting killed by grunts because I keep switching between “everything is a grey box” to “ooh, shiny”.
It became a distraction yet, I justified it because I kept wanting to experience the same game I had played all those years ago.
The reality of the situation is that even if I wanted to, I couldn’t experience it again.
Along with many other gamers, I cling to a past which does not exist.

I fall victim to nostalgia, again and again.

We need to start accepting that there was no golden age of gaming, especially not in an industry which still relatively young. Sure, graphics get better but ultimately, for every great game of its time, there are a hundred terrible or sub-par ones that we look back on fondly because they remind us of the time we played them.

Yet, we treat HD remakes like revered, holy doctrines that will in some way act like time capsules to remind us just how amazing a title was at that specific time we first experienced it, rather than seeing it for what it actually is; a re-packaging of the past. Like all time capsules, it’s nothing more than a few scraps of paper with badly drawn kids pictures and newspaper clippings or reviews that are no longer relevant.
You can’t capture time or control it (sorry, Prince of Persia fans) and you can’t wrap up and re-package nostalgia, it’s nostalgia precisely because the past can not be re-attained…that is, unless of course you can monetise it or make a profit. Much like when a film producer squeezes every last drop of profit out of a film franchise by pushing out sequels and remakes. If something was a success in the past, then why do we need to dig it back up again? Surely, we should be moving on to bigger and better things?
In some instances though, I suppose reliving a game from our back catalogue in the modern day can be interesting and informative, it may solve disputes as to how good a game was. If an older game is transferable to current day graphics and technologies and is still holding up a decade or even two later, that’s pretty impressive and of course the game should be lauded. Except, chances are it was already lauded back when it had it’s original release. 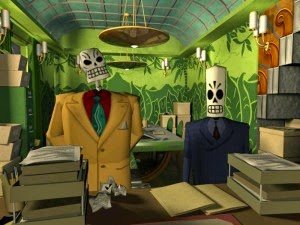 Of course, often we miss games first time round. That’s certainly the case for me as I never played Grim Fandango when it was originally released and as my friends tell me, I missed out.

Lucky for me there’s a remake now!

I’m glad I’ll have the chance to play Grim Fandango Remastered, because I want to experience it. It sounds like the kind of game I would have adored back in it’s day, so I’m grateful to have the chance to again. I suppose this is another argument for HD remakes, they attract both new players and players who missed it first time round.
I recently visited my local games arcade (yes, they still exist…) and I was shocked at the high quantity of different Pac-Man games on offer. There were so many, a special Pac-Man area had been allocated and was cordoned off separately. There was the original Pac-Man, Pac-Man Basketball, a huge 4-player 6ft Pac-Man game, pinball machines, fruit machines…it was kind of weird.

Somehow, this overkill didn’t seem to bother the kids who were playing them and I noticed a lot of them were playing alongside their parents, who more than likely played the original.


That kind of thing that usually warms my heart and makes me feel all fuzzy yet the sense of extreme overkill from the glow of yellow everywhere and the echoes of “waka-waka-waka” made the whole thing feel eerie and surreal and I was left feeling ashamed of the blatant capitalism around me.
Not my usual feeling in a games arcade!
Companies cashing in on new versions of things is not a new phenomena and sadly, more often than not, consumers lap it up because…wow, Link’s sword looks amazing! It’s exactly like the original except more detailed and….OH MY GOD, IT’S SO SHINY! *cue extreme geek-gasm*
When I think about all aspects of remakes the arguments for and against are pretty equal. While the negatives seem to be about profit or hindering developers into creating new games, one of the plus sides is that they enable us to introduce new generations to all the classic games we grew up and they can do with without going all ‘Pac-Man Overkill Land’.
Have you ever tried to show a young person a game you cherished at their age, only to have them turn their nose up at the bad, blocky graphics?

Your childhood is being dismissed, with one throwaway comment, your whole childhood falls apart.
I once showed my younger cousin my Game Boy, having put in my favourite game to play on it, The Legend of Zelda: Link’s Awakening.
Truly a great game which has also been remade, the response I received was “I can’t believe you actually played this crap!” as if I had just showed them one of those wheel and stick things that passed for toys in Victorian times.
This is where HD remakes can step in, they can bridge that gap between generations and allow a parent to relate to their teenage kid, that’s kind of nice, right?
Imagine being able to play a game with your kids or future kids that you played in your youth.
Oh and guess what? My little cousin has since played the remake of Link’s Awakening and loved it. Yesssss! Childhood restored!
Though, I doubt the gap between ages is the primary reasoning behind the high quantity of remakes out there today, companies care less about connecting families (okay, maybe not Nintendo…) and more about profit (on second thoughts…).
But then, if it’s not about profit then maybe it’s that we all just grew up and got jobs in the industry we love and are too caught up in the good old days and those faux-golden years of gaming to create anything other than recreations of the things we cherish?
That would make sense.

Though, I still can’t shake the notion that HD remakes are all about making money. They practically guarantee older fans of a franchise will re-buy it, new players might buy it and those who missed it will buy it as it’s new…it really is wringing out every drop of money it can.
Even close friends of mine who recently made the leap from Xbox 360 to the Xbox One have re-purchased games they already owned. Grand Theft Auto V plays perfectly well on the 360 and we had great fun on multiplayer, yet the draw of first person view and even better graphics was enough for them to justify buying it again on a new console…mere months after it’s original release?! I couldn’t follow suit because it felt too soon and the copy I had on the Xbox 360 worked fine.
Of course, GTA V on the Xbox One is hardly a remake but essentially, if it was released 10 years later, I doubt it would have been any different. Add on a new game mode and update the graphics and you can guarantee fans will buy it because that’s what they crave.

New ideas, while exciting to us are unknown, we like safe, paint-by-numbers ideas we’ve seen a hundred times and are comfortable with. That familiarity we cling to, while life-preserving in the animal kingdom, is not something we need to hold on to, we removed ourselves from the food chain for a reason. We should be striving to create new things, bold, innovative and fresh. The lack of new unique intellectual properties in the games industry is a sign that something needs to change, or that it will inevitably change.
Lack of new ideas or the fear to take risks on them leads to independent studios and creators making their own games, something that’s been on the rise in recent years, so you could say that remakes are a positive thing, in that they inspire new talent to shake up the industry? I’m not saying that it should be that way, it is extremely frustrating for those of us who yearn for something more.
Every downside to HD remakes has it’s silver lining though, for every argument against them, I find counter-arguments and even the one that bothers me most; the profit, is essentially a good thing for the games industry as a whole.
While companies extort our nostalgia for monetary gain, a games company making more money speaks volumes for the industry itself. The more money they attain, the more games they can eventually make and more employees hired and the more risks they can take on new games. Or so I hope.
It seems to me that gamers (and that definitely includes myself) like to complain. We complain at the lack of new ideas and intellectual properties.
Yet we continue to buy the same games and their sequels, we moan about games lacking a quality that older games possessed, yet we are blinded by nostalgia.
We moan when graphics are bad, sometimes even when they are good. We’ve made the industry what it is, we’re part of it.
Yeah, that’s right…my rant got all self righteous and now I’m blaming you.
It’s okay though, in the future someone will make a HD remake of my rant and you’ll look back fondly, thinking to yourself “I remember that! What a classic!, then you’ll give me your money.
Or alternatively and the most likely scenario, over the years my rant will fade away into obscurity, lost in the endless Internet ocean of cat videos, mass information and nothingness.