“Hey, honey, Smitty’s at a toy show today,” my wife says to me as she lay in bed Sunday morning, while I shake off both the chill from walking the dog and the sleepiness from being out too late the previous night.

Facebook serves many functions, and among them is a Magic 8-Ball quality.

Ask it a question, and answers float to the surface. We’re in that what-am-I-doing-today phase of the morning when a friend posted his sale table at the toy show. 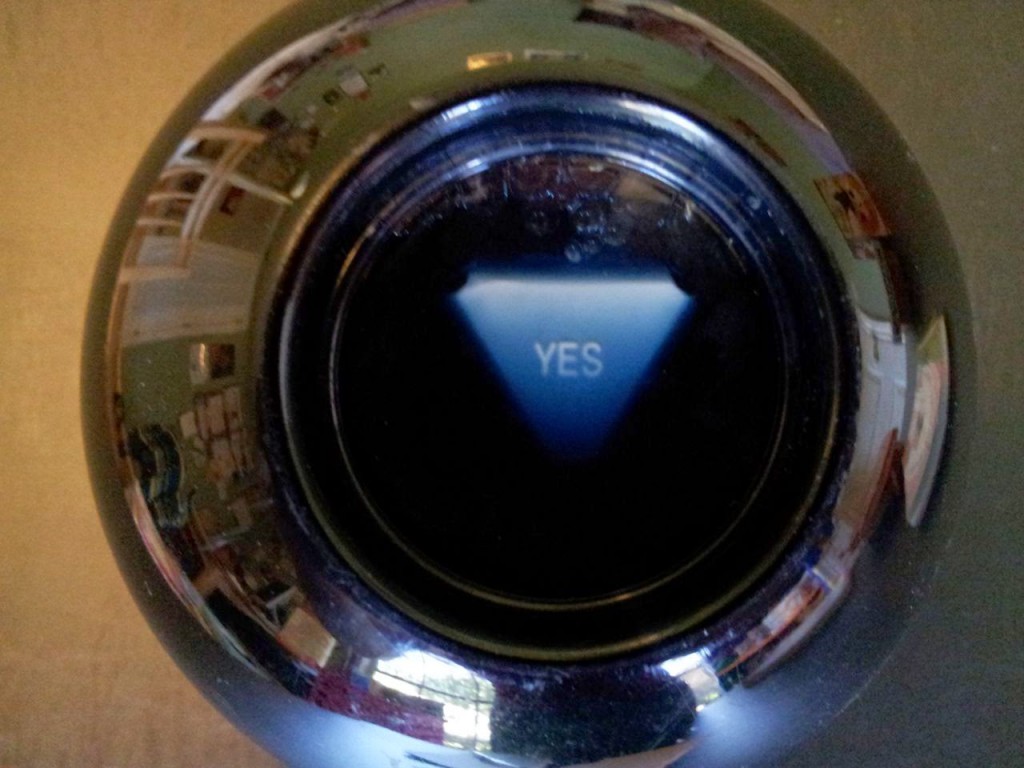 Some showers and a quick drive through a light snow – seriously, more snow in New England – and soon enough we are enmeshed in toyland. And geektown.

For this geek in particular, there’s nothing like toys to really get me going. I’ve written about toys in this space a few times, from favorite items to long pined-for hunks of plastic that got away.

Toys are personal. They belong to you. As a child, playing with them lodges you deep within your own mind, playing out your own fantasy worlds and bending others’ creations to your will. 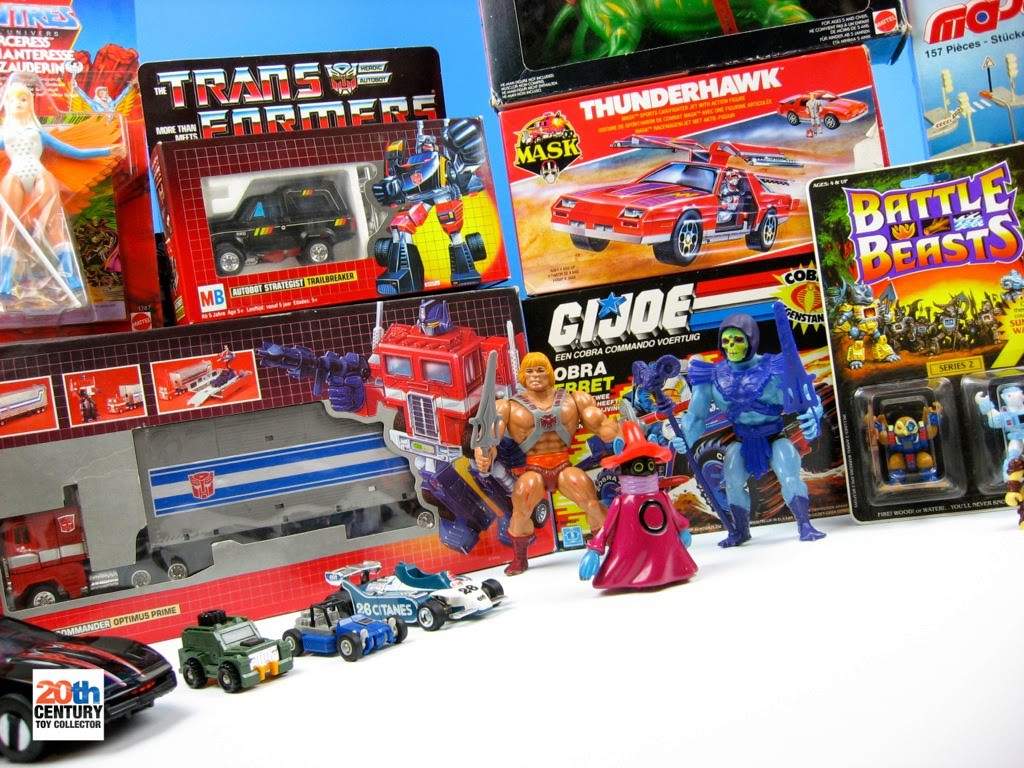 For a geek in particular, toys are the introduction to adaptations.

You see a cartoon or a movie, and you like it so much that you want your own little version of it for yourself. You play out the story and create your own. They’re the first fanfic, the first collection, the first material expression of fandom – the heart of geeking out on anything.

We enter a Best Western hotel off an I-91 exit a town over from us. The bus for a small-college men’s basketball team sits in the parking lot, and several players lounge impatiently in the lobby. Oh dear, jocks and geeks all in the same place. Don’t make eye contact, keep walking down the hall before they shove you in a locker. (I kid, I kid.)

The geek antennae ping fiercely as we enter the ballroom and find ourselves awash in 50-something years of pop culture.

Several collections of G.I. Joe dolls – sorry, action figures – both vintage and reproduction, along with uniforms and weapons of every stripe, next to bins of the 3 3/4-inch figures from the A Real American Hero cartoon, to more figures packaged for those forgettable live-action movies.

Need Transformers? I spy a few Generation One items, several of the many permutations the toy lines underwent, and a few of the gorgeous, giant import figures drawing triple-digit prices. 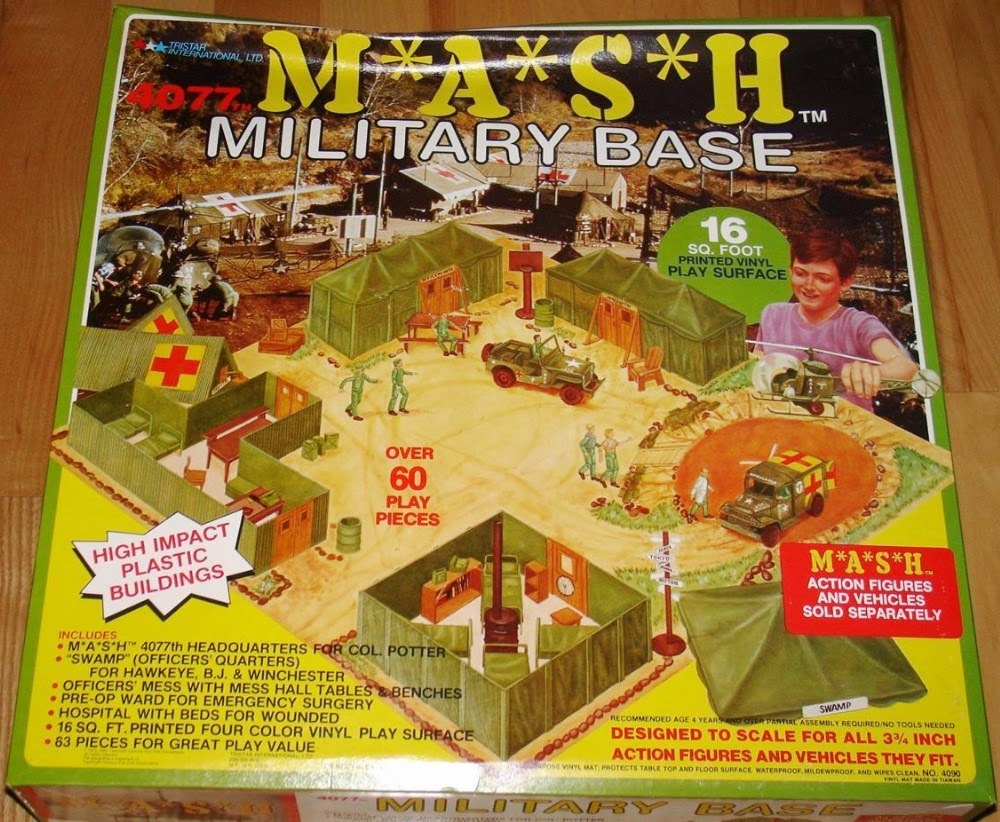 We even see some licensed products, which can lead you down some off-color roads. Who wouldn’t want a M*A*S*H camp playset. Find out how suicide is painless and brings on many changes, kids.

Products of a 1980s childhood, considered the apex of “toyetic” cartoons, find a foothold in nearly every collection here.

Look, Ming the Merciless’ dragon, Mongor, from Defenders of the Earth – where Flash Gordon teamed up with superpowered and magical beings The Phantom and Mandrake the Magician. And Lothar, the black dude whose power was … being really, really strong.

Hark, some guys from Sectaurs – the short-lived cartoon about insect humanoids and giant pet beetles and spiders that my brother and I were afraid of! Seriously, those oversized bugs sat in the milk crate full of toys like some landmine full of fear. 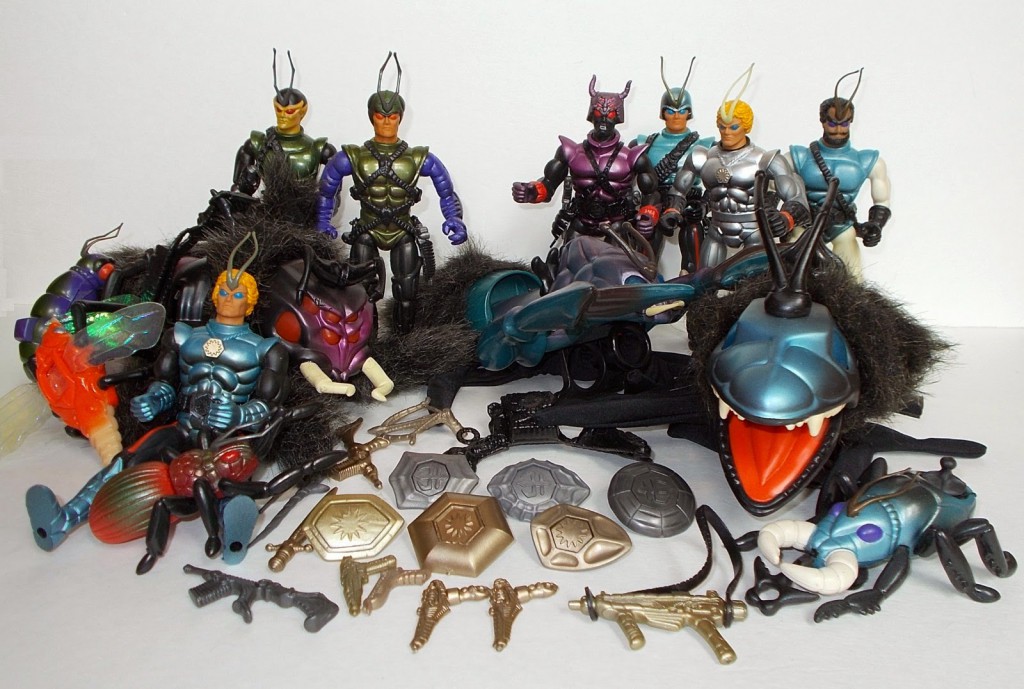 A few guys, including Smitty’s friend selling alongside him, have stuff from M.A.S.K., the cadre of secret raiders fighting crime in a world where civilian vehicles transform into battle stations.

I loved M.A.S.K. as a kid. Matt Tracker, the good guys’ Aryan leader driving a Camaro with gull-wing doors that would flip out jet engines from behind the tail lights and fly.

Tracker was a freaking hero right below Batman and Optimus Prime. (Ace McCloud of Centurions and Superman rounded out my top five.)

Smitty’s friend has the Boulder Hill playset, the good guys’ awesome secret fortress. He and I joke about how frightening the M.A.S.K. premise would be in the real world, to see some van and then, bam, missiles and guns flip out. The widespread destruction their battles would engender, we agreed, also explains why the show seemed to take place only out West with its wide open spaces. (Boulder Hill was in Nevada, after all.)

There’s some more stuff: piles of uber-detailed Spawn figures, a pair of Adolf Hitler dolls (?), some Alien stuff, a super-awesome RoboCop from Square Enix Play Arts Kai. I work hard to avoid eye contact with the erstwhile Alex Murphy, lest he take all my money to come home with me. 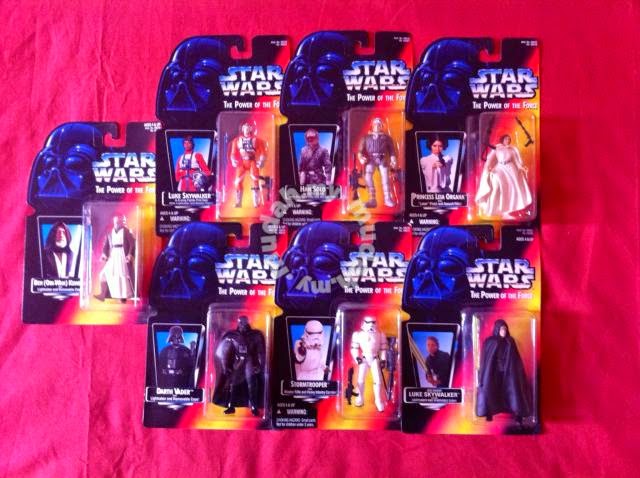 We turn a corner, and there they are: an entire table of the 1995-ish return of Star Wars action figures. Rows of those Kenner molds that were both more lifelike, more resembling the actors, but with enough fantasy injected to keep them from being the exact film replicas you’re used to now. (Looking pretty buff there, Mark Hammill.)

“Five dollars each,” the collector says, adding that he’s just trying to unload them quickly. Knowing an awesome deal when we see one, my wife and I peruse the rows plastic people (and aliens) encased in plastic bubbles and cardboard.

After some time, we settle on Princess Leia/Wicket combo for the wife, and a Luke Skywalker vs. Wampa set featuring Luke with bloody face and a Wampa with detachable arm – just like in The Empire Strikes Back. How could I turn that down? 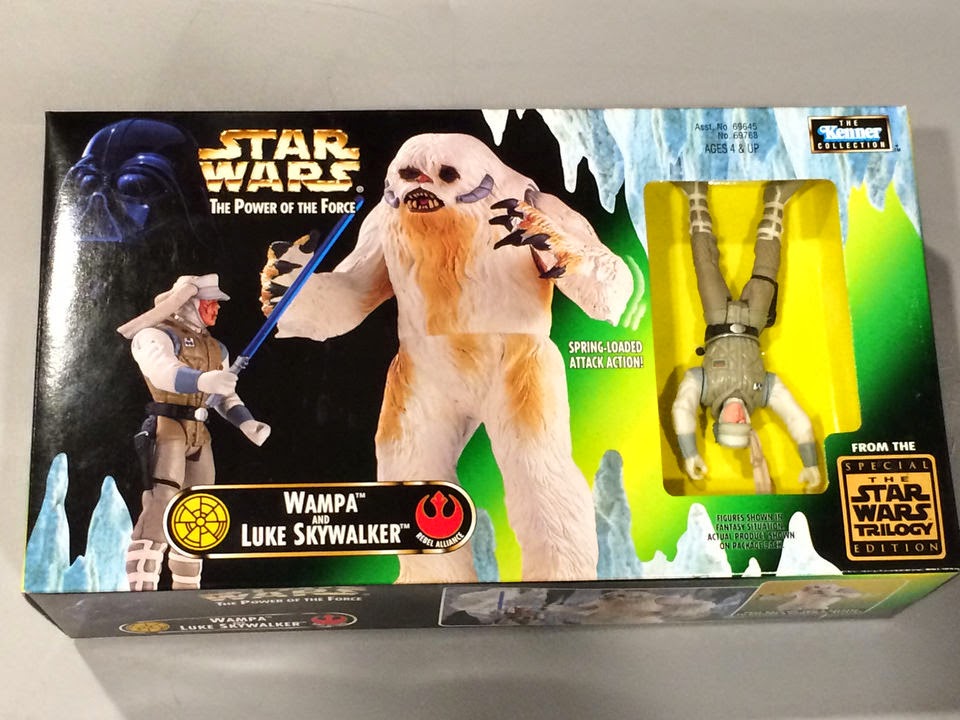 Luke and the Wampa are for a friend’s Star Wars-obsessed son. It’s at the right time; he just turned 11. He’s got two years, maybe four years tops, before all the real toy-playing is finished, even if the toy collections continue.

The mid-’90s Star Wars revamp bridged my teenage years when playing with toys turned into straight-up collecting them, ending with Phantom Menace figures in 1999. They helped usher my world of toys from kids’ playthings to adults’ hobby.

And for geeks, the toy hobbies typically line up with fandoms. I still collect toys, but for the most part I pick few and far between. I picked up a ton of DC Comics figures over the past 15-plus years, including many of the Mattel series from a now-closed comic shop owner looking to drop inventory.

I got a lot of Batman-related figures among the trove of goodies, but I never picked up a Penguin until Smitty sold me his for a nice price at the toy show. 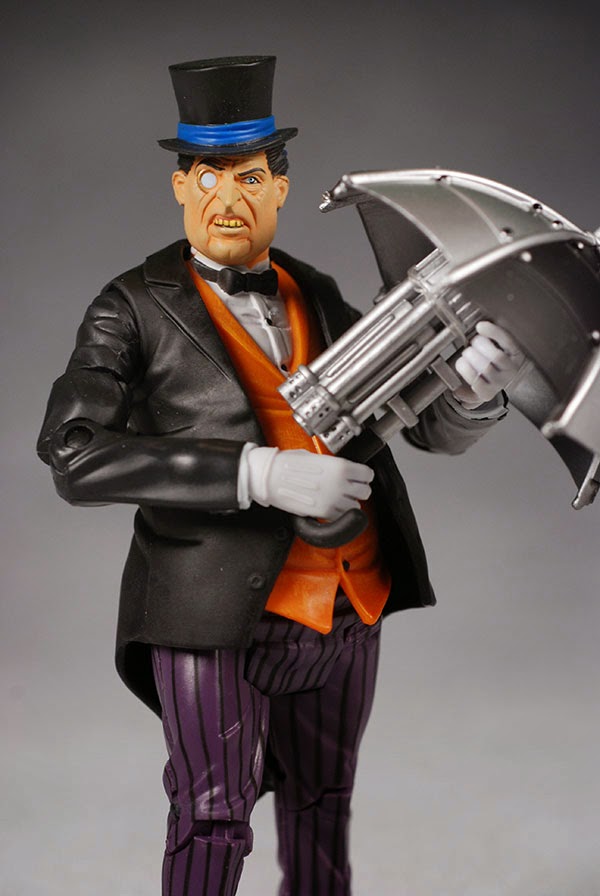 Now dear old Oswald Cobblepot sits on the bar off the kitchen, wielding a machine gun umbrella and ready to do battle against the Caped Crusader and Boy Wonder.