For this installment of Cool Shirts, I took a look at some of the shirts from 80sTees, which was the first 80s memorabilia online store and has now become a prime destination for pop culture tribes everywhere to come together and share their geekery!

These are a few of my recent favorites. 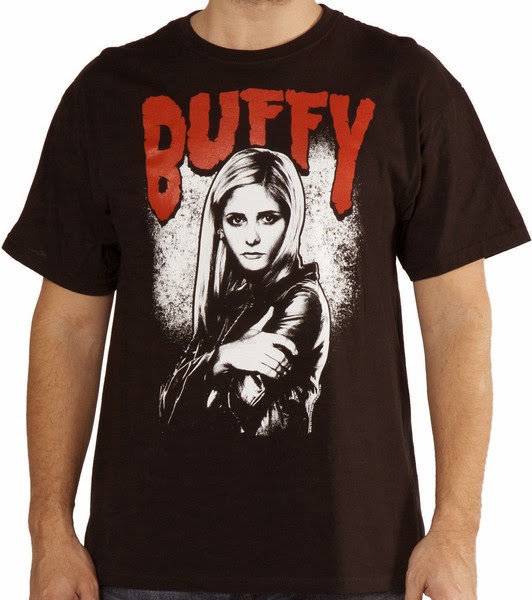 It’s hard to believe that Buffy ended a dozen years ago.

And this shirt captures Ms. Summers standing underneath her name, ready to kick ass and dust the undead with Mr. Pointy.  This 100% pre-shrunk cotton shirt comes in black and might make you the best dressed person in all of Sunnydale.

Stake and Watcher not included. 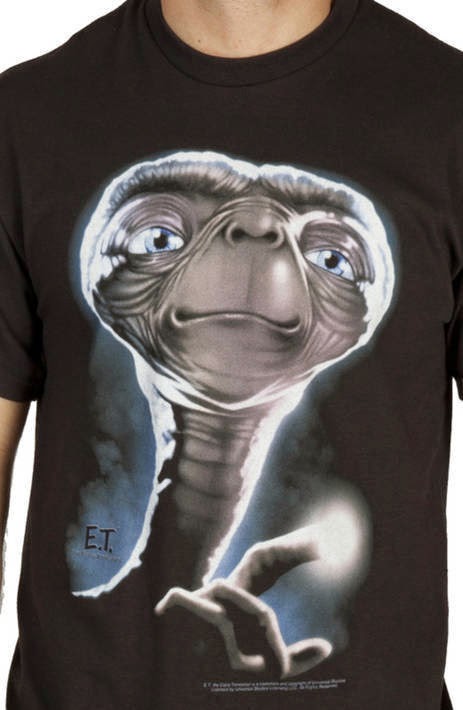 It’s scary to think how a movie like E.T. would never be released today without some serious changes.  Getting dressed up for Halloween as a terrorist or calling E.T. a deformed kid or having him get drunk and have Elliott feel the effects, wouldn’t likely fly with today’s political correctness.  This 100% cotton shirt is a reminder that E.T. is the O.G. and even now, his finger glows bright. 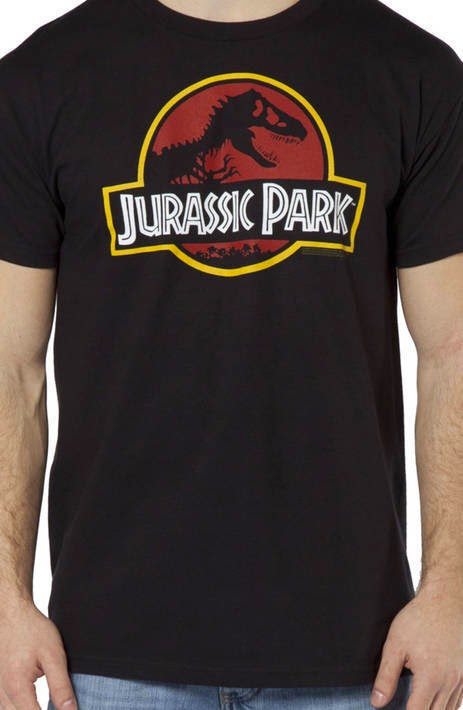 “I survived Isla Nubar and all I got was this stupid shirt.”  As audiences head back to the Park this summer, show off this logo shirt that tells these hipsters, you were there when the shit went down.  This 100% cotton shirt is perfect to wear whether you’re digging up fossils, ducking raptors or waxing chaos theory.  Hold on to your butts… 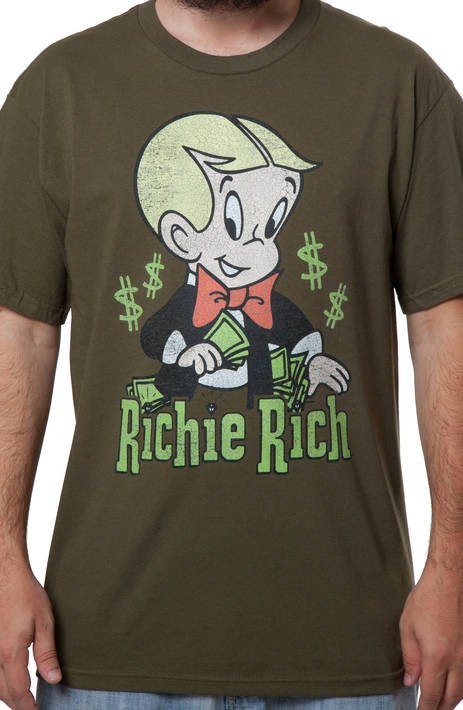 How rich is Richie Rich?

Let’s put it this way, he looks down on Bruce Wayne and Tony Stark as nouveau riche.  Comics’ original 1%-er, Richie does what he wants when he wants, including making an appearance on this this 100% cotton shirt.  He might not be seen much in the comics or on TV these days, but chances are you can catch him hanging with Russell Simmons and Mark Zuckerberg.  Or his dog, Dollar.

RoboCop “Say No To Drugs” Shirt 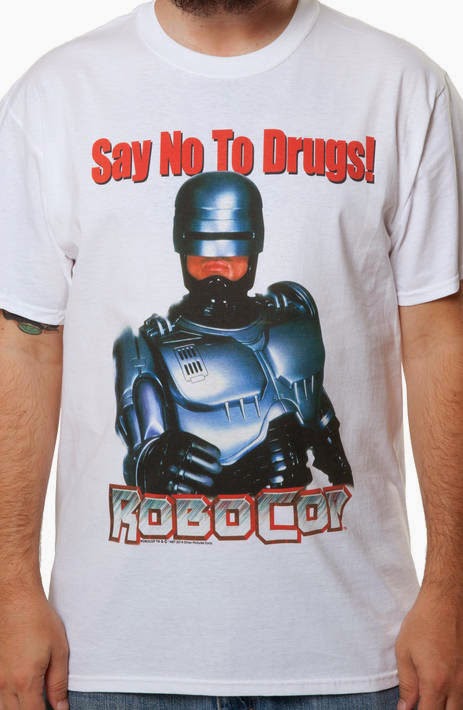 This 100% cotton shirt shows former Detroit police officer Alex Murphy turned into the Future of Law Enforcement™, RoboCop, laying down the law and reminding folks everywhere to “just say no”.    Not a bad message from a baby food eating cyborg who’s programmed to imitate T.J. Lazer as well as serving the public trust, protecting the innocent and upholding the law.

Moishe Where The Wild Things Are Shirt 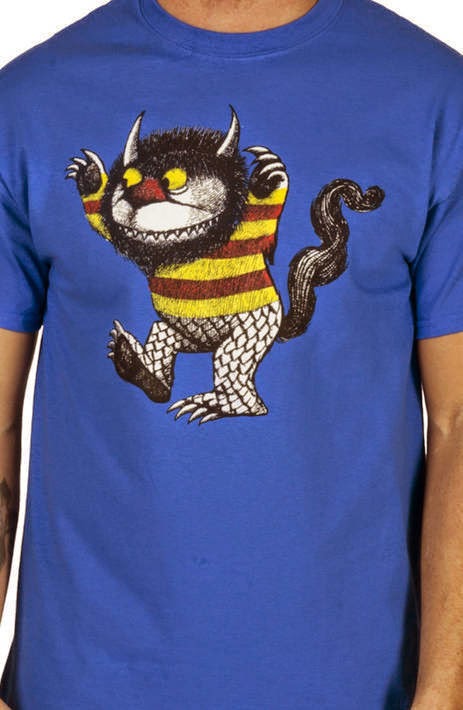 Named after creator Maurice Sendak’s uncle, Moishe, is one of the wildest of all things.  Unceremoniously renamed “Carol” for the live action film, Moishe plays foil to all of Max’s terribly roared roars and terrible teeth gnashes.  This 100% cotton shirt is best worn during a wild rumpus. 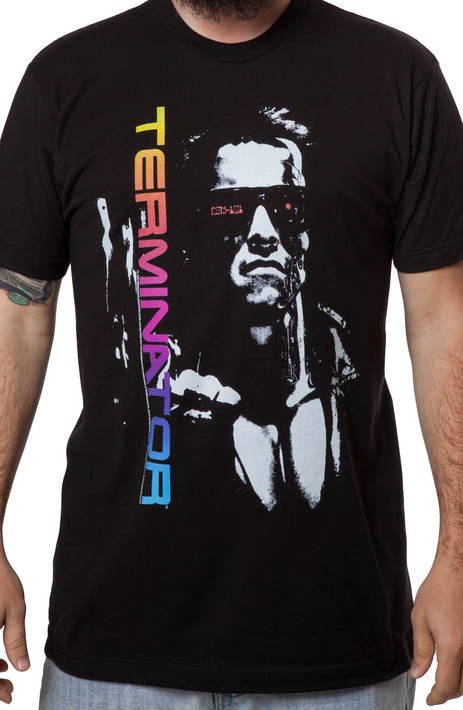 This summer The Terminator franchise gets rebooted with a new take on the thirty year old franchise retaining one important element, Arnold Schwarzenegger.  This 100% cotton shirt celebrates the fantastic Cyberdyne T-800 model that guarantees that unless you have a dog, this one is hard to spot.  It looks human, it has real skin, sweat, bad breath.  The neon logo across the side is a reminder that the war being fought happened in 1984.  Buy the shirt; there is no fate but what you make.