In 1984, Scott McCloud established a name for himself with his creator owned series, Zot!, receiving a number of Harvey and Eisner award nominations.  He brought Zot! to an end in 1990, after 36 issues.

McCloud returned to comics in 1993 with his book, Understanding Comics, which established him as a comics theorist, presenting a definition, history, vocabulary, and methods of the medium of comics in the form of a graphic novel.  He went on to write two additional books on theory including Reinventing Comics and Making Comics, as writing several Superman Stories and a graphic novel, The New Adventures of Abraham Lincoln. 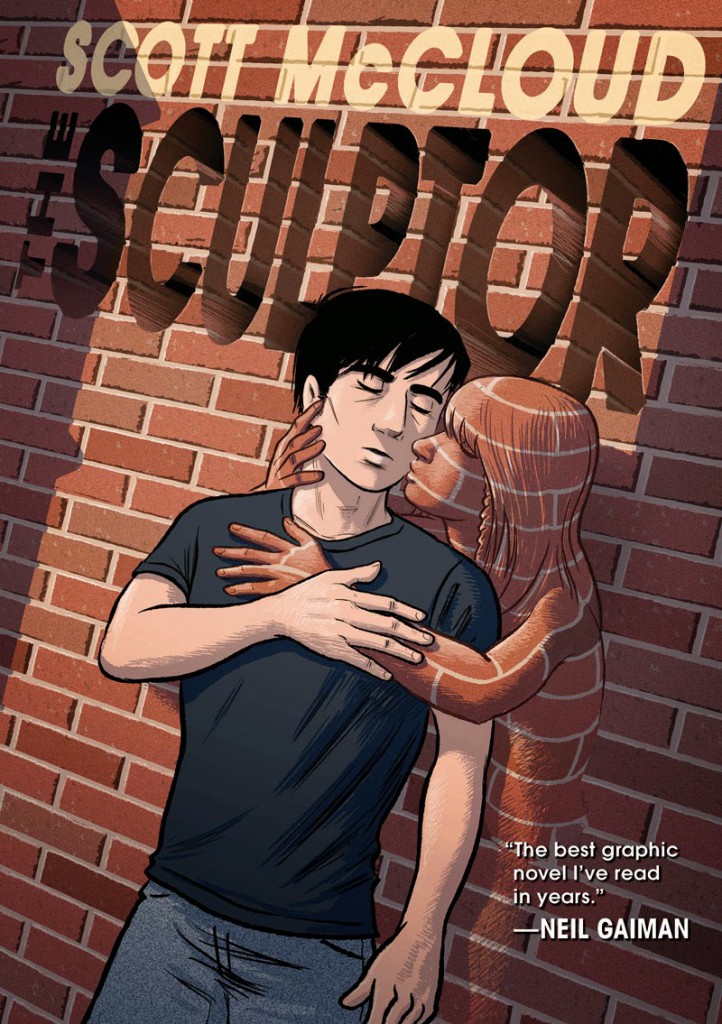 The Sculptor tells the story of artist David Smith, who makes a deal with Death to sculpt anything he can imagine with his bare hands.  After learning that he only has 200 days to live, and suddenly discovering the love of his life makes the decision of what to create harder than he thought.

The comic book scholar and auteur, McCloud, took some time with us to talk the comic creation process beyond his books in the Understanding Comics and his creator owned Zot! series.

Scott also questions the carbon date of The Golden Age of comics. Was that in the past or are we living it today?

FOG!: Thank you so much for joining us to talk about your book. Your books have formed my college years and were part of my curriculum and really helped me understand the language of comics and even more-so, the possibilities of what comics can be. Thanks for giving us the tools and the language to talk about comics like that. 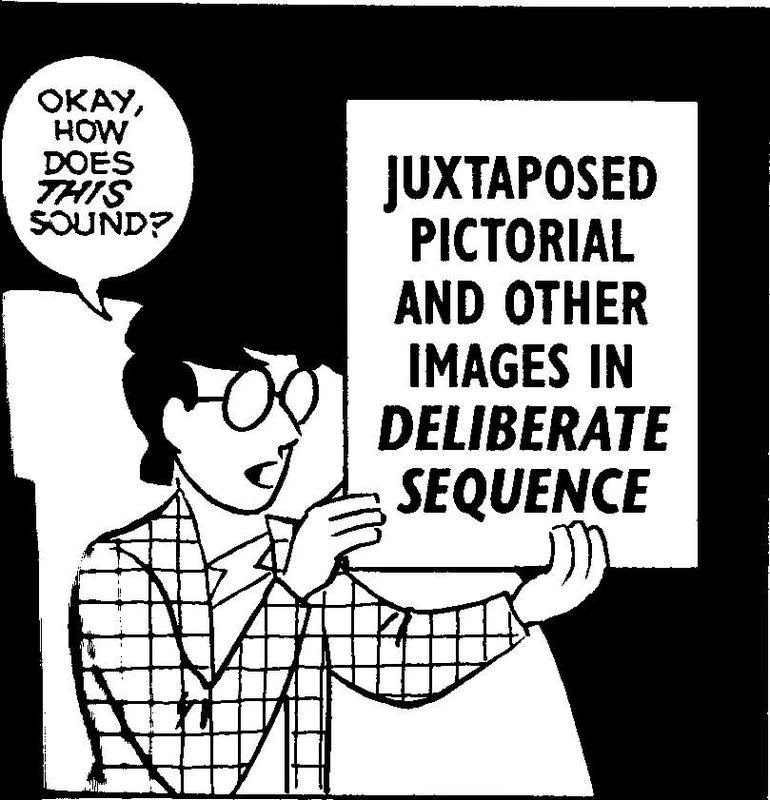 Scott McCloud: That’s encouraging to hear because it has always been about potential.

Even since I was very young, about what comics can do. That has loomed a lot larger for me than what they have done.

I have always hoped that we had greater things in the future than in the past.

A lot of people are very nostalgic about comics, for them it is about celebrating the wondrous Golden Age — I don’t know, I think The Golden Age is now.

It is always good to be looking at the present and to the future for sure. Did you grow up here (Boston, MA)?

I was born in the area, Lexington, MA. I lived there for the first eighteen years of my life. My family had that house for six years when I was born and had it for another 6 or 7 after I left.

How did you get into comics? Were they always part of your life when you were growing up as a kid and that fostered you into wanting to be a creator?

I was a real snooty little kid. I read real books and I turned down my nose at comics.

People are going to be surprised at that!

At the age of 12 or so, I thought I was too old for comics. I had seen some superhero comics at friend’s houses and it just didn’t do it for me. I was sitting there reading Arthur C. Clarke or Tolkien. I was into Ben Bova at one point, Asimov. Stuff like comics seemed to be crudely drawn. I just wasn’t into that stuff.

But I was friends with a guy named Kurt Busiek in middle school. Kurt and I played chess and billiards. He would come over after school to escape his father who kept giving him pointless jobs to do.

I had one of those dads too.

I think we can all identify.

Kurt was getting into comics at the time. He tried to get me to read the things and I wanted nothing to do with them. He had to really persevere to convince me to try his stacks of Daredevil and X-Men. He finally succeeded. I had so much resistance to comics that we can say pretty confidently that if Kurt hadn’t been around there is no way I would have gotten into them, at least at that age.

So I started reading them and at the age of 14 and by the age of 15 I announced one day “That’s it, I’m going to be a comic book artist”. That was it for me.

By the time Zot! comes around, are you consciously thinking about doing something unique and having your own voice and railing against what was happening in superhero comics at the time? Or was it just a natural story for you to tell?

Zot! was just a funny thing. I was working at DC Comics production at the time and I was contemplating a gradual incremental climb through traditional industry roles. Then my Dad died. It was only three weeks after college and I had this job and I decided I didn’t want to wait. 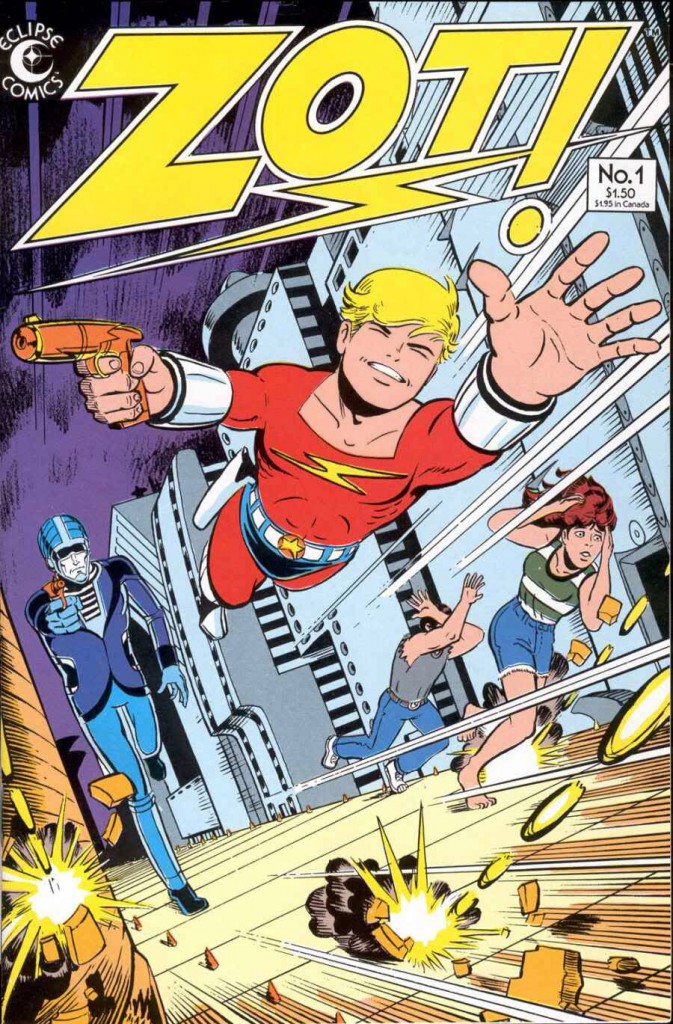 Zot! was the idea that was nearest to the top of my pile of possible projects. There were a lot of different things that I wanted to make. Not all of them were superhero comics.

In those days, superheroes were closest to sunlight, and I think I wanted some sunlight on me.

I didn’t want to be just another anything. 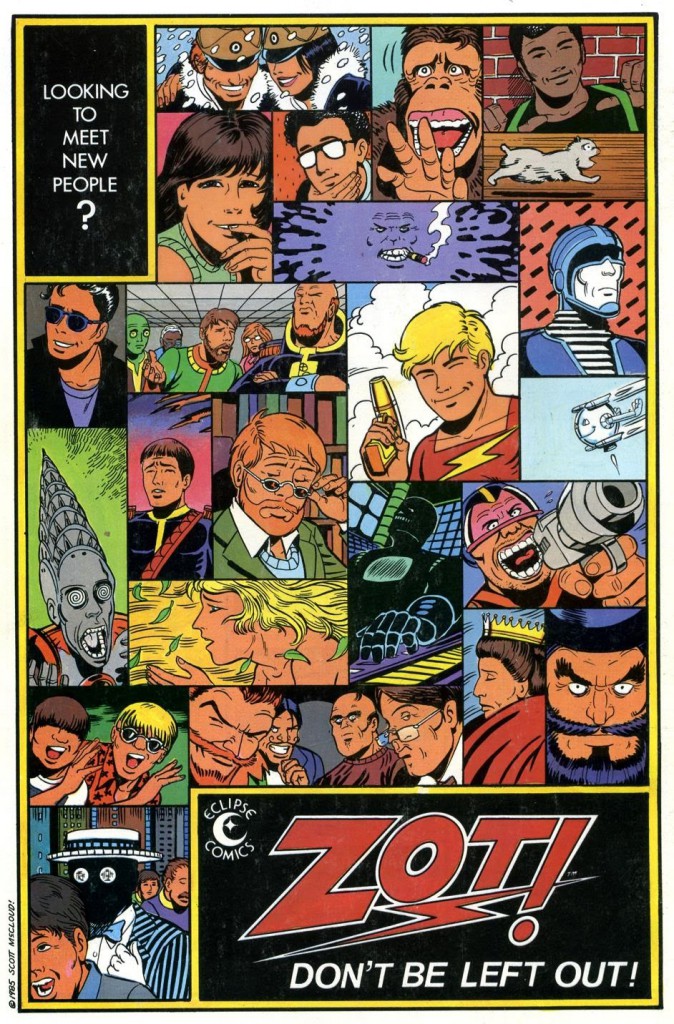 With a slightly contrary spirit I did this retro Buck Rogers-y Paleo future thing. I used this as an opportunity to try out 100 different ideas about how I thought comics could work.

When my ambitions outgrew the series, I moved on to something else, which turned out to be Understanding Comics.

With The Sculptor, you are working with these huge archetypes. How did you go about laying out this whole story over 500 pages, incorporating superhero ideas — was that all there at the beginning?

Part of it was, the idea of Death was there. The conceit of what appears to be an angel at the beginning came to me at the actual making of it. There were the periods of really a few decades before I started in earnest working on the project, then there were the five years that took me to make the thing.

The deal with Death was there nearly from the beginning. There were a lot of details to go in, 500 pages worth. Even though there are these broad stroke ideas in the story, the themes really turn on small human moments. That is something I had to discover in the actual making of it. The idea was in my head for a very long time.

When I finally decided I really had to start working on it in 2006, it just happened to be when we were starting a year long trip of all 50 states to promote the book I had just done. So I couldn’t actually work on it, except in one respect, I could think about the story. Sitting in the car while my wife drove, I’m not trusted to be behind the wheel very often. Staring out the window and thinking about the story was a good exercise in story structure. I had to work out in my head how the story worked and I took a lot of notes. 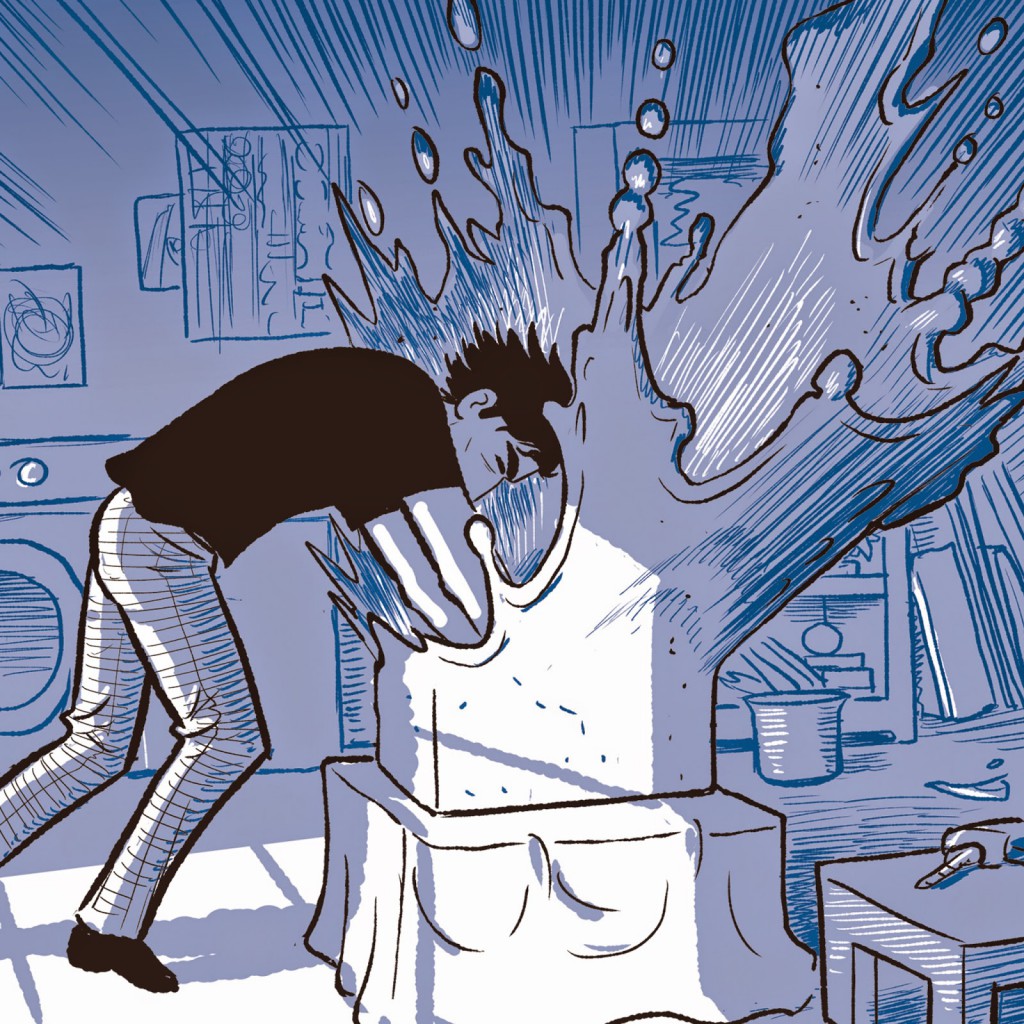 With 5 years of working on it, it broke out into two stages, the layout stage in rough form and then my editor’s blessing and permission and at his urging, I actually redid it and redid it four times. Four drafts of those 500 pages. It took me two years to get to the point as to where we were both happy. And then I got down to drawing my first finished panel.

I loved the process of revising, of doing those roughs, of rewriting. I am a converted true believer in Hemingway’s admonition that the first draft of everything is shit. I really think there is so much you can do with the story. You have to know what it is about to write the story but you have to write it to know what it’s about. That’s exactly what I did. I wrote it and then eventually I came to understand what it was really about and could really write to that core.

I noticed from your CBR interview that it was maybe 4 or 5 revisions all told, is that correct?

The fifth revision was, when I was all done and I had drawn the thing, I had to completely rewrite the first 50 pages! (laughs) That one I had to talk my editor into but he was a sweetheart and he let me do it. 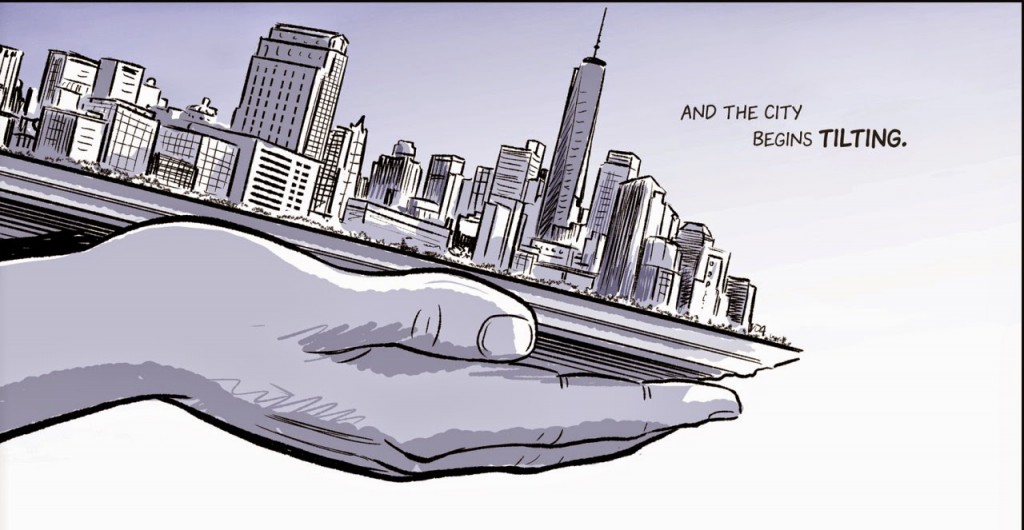 You aren’t working Marvel Method with yourself, you had to write and draw 50 pages.

In a sense, I guess I was working Marvel style, there was no script, there was never a full script. I never sit down and write a scene. It was done organically, words and pictures always working together.

That is what we enjoy about your work. I did enjoy those family moments, the small moments in the life of David having huge ramifications at the end. A lot of times in the book, it is a straight narrative story. People are talking, a lot of people making decisions and going about their day. You do in an Eisner-esque way show not only the passage of time, but focus on symbols in the story that are very intimate. As a reader, we are working with  your pace and using that as a guide for the story.

Very much so, the reader is collaborating in that, but I wanted that collaboration to be as seamless as possible. Unlike some of my other stuff where I would stop every ten seconds so that you would notice what I was doing on a formal level. Here I was hoping I would suck in the reader. I was still trying different formal techniques in service of those Ideas but it was always in service of the story. 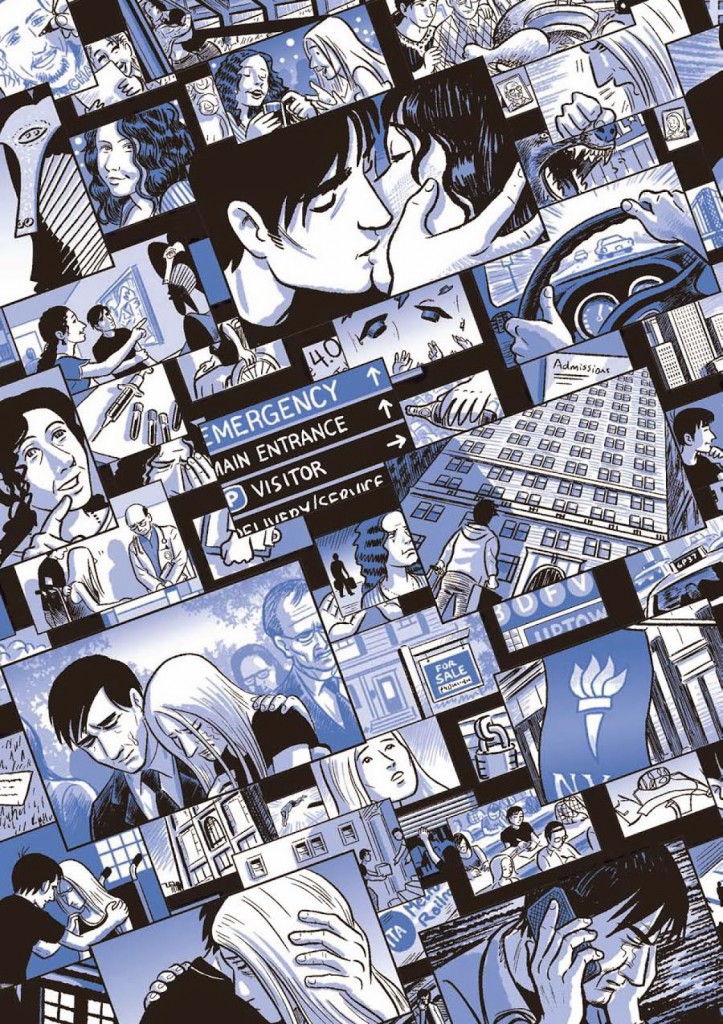 This one, I wanted content driving the bus. This was a case of content driving the bus. There were also a lot of experiments in the book, a lot of things I tried for the first time as I tried to bend the medium to tell the story. I was hoping that in a way the reader wouldn’t even notice. They would be too in the grip of the story. Their foremost thought would be in the story, not ‘how did he do that?’

By wanting to try different things out, is that what prompted so many revisions?

It was more that the story was starting to come to focus in my mind. The first revision was about fixing things. With each revision, it became about excavating what was below the crap. Seeing the shape of the story of what it wanted to be and pull that story out. 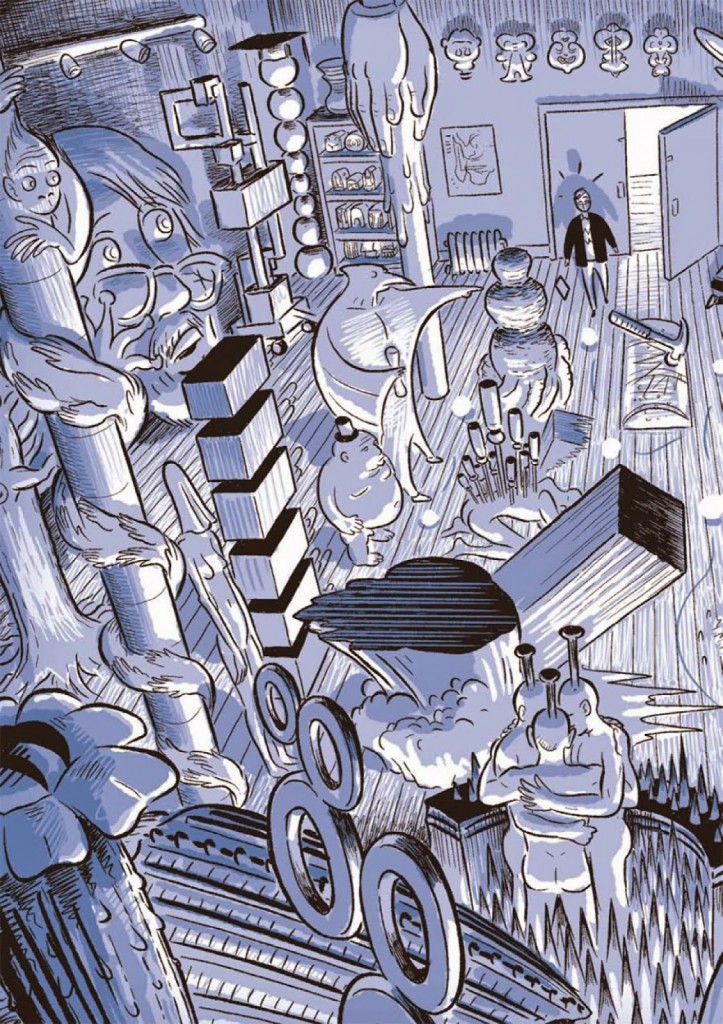 Occasionally I would have a neat little bit, something that works with comics or was interesting, and then I would realize that while it might be nice—it didn’t really belong. It didn’t really have anything to do with what that story was ultimately about. If you can pull it off, If you can have the parts reflect the whole, that’s hopefully a book that feels like it has a breathing heart, it breathes when it is on the shelf at night.

A lot of the things over the course of my career could be the collection of parts, I didn’t want it to feel that way. 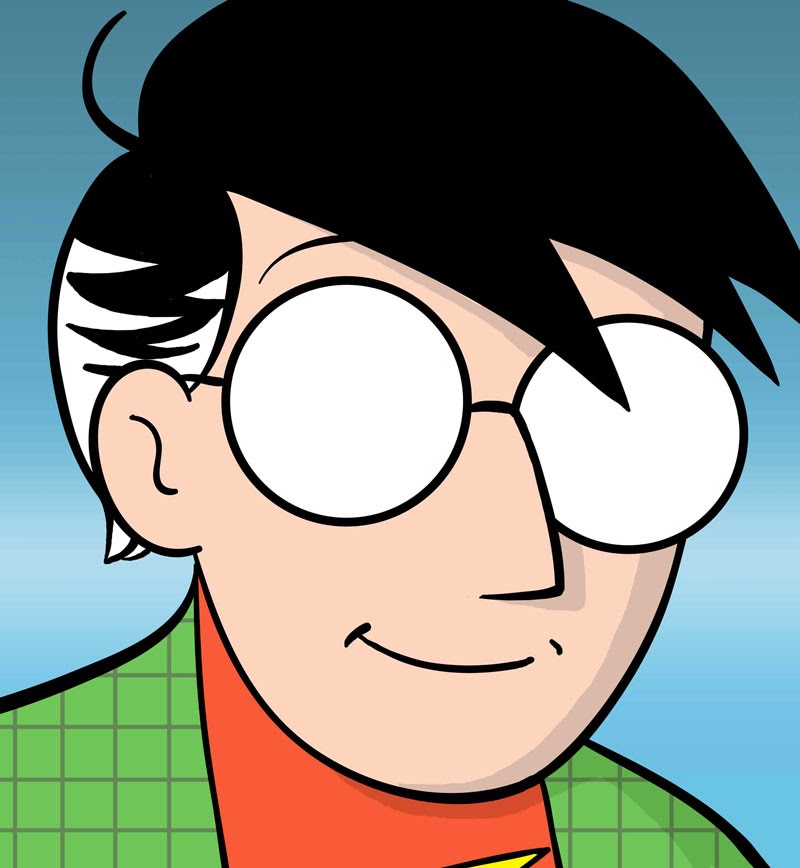