If the photograph of the man above looks familiar it’s because Miller has appeared in over 100 films and dozens of television shows including Gremlins, Gremlins 2: The New Batch, The Explorers, Piranha, The Howling, A Bucket of Blood, The Little Shop of Horrors, Chopping Mall, Night of the Creeps, The Terminator, The ‘Burbs, Star Trek: Deep Space Nine, After Hours, Used Cars and Small Soldiers.

The documentary has now played several festivals, including the prestigious Sitges Festival in Spain.

It opens Friday, March 6th in Los Angeles, and rolls out to Toronto, New York, Minneapolis, Detroit and Dallas thereafter. thatguydickmiller.com for details.

I had a chance to catch up with director Elijah Drenner (American Grindhouse), in Austin, where we geeked out over cult films and talked over the details of this amazing tribute to Dick Miller… 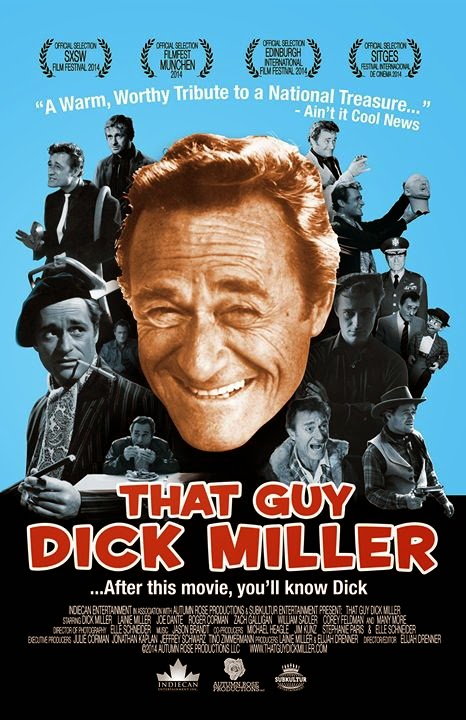 FOG!: So, That Guy Dick Miller was financed in part by a Kickstarter campaign, which is how I first heard about it. When did you first decide this project was going to be crowd-sourced, and tell us a little bit about the process.

Elijah Drenner: Well, it was the only option. Nobody was going to give us the money to do it.

But this feature originated as a DVD extra, so didn’t the distributor give some funding towards that?

Yes, they gave us some money, but a lot of that went to Dick’s talent fee. So we knew it was a small piece and it would be fun, and we knew what clips we could pull from. We thought this was “let’s do this small piece on Dick Miller,” even then we knew we had a something that we wished wouldn’t just be a small piece on a German DVD. Then everyone was supportive in making it a feature.

You have a background in producing a lot of these documentary shorts, but was Dick Miller a subject you always wanted to do? In your previous movie American Grindhouse you didn’t interview him.

That’s correct. I mean, no, I always knew who he was, but I didn’t go into this with a marching drum to do something about him. It was actually Subculture’s idea, the German DVD distributor, but I embraced it and I absolutely wanted to do this project.

Had you met him before the project?

I had not met him.

It does seem that Dick’s wife Lainie played some part in the movie becoming a reality, so how did his wife get involved in the film as well?

Well, getting Lainie was crucial, and she held “the keys to the house.” If we didn’t have her involvement, I think it would have gone really bad. But she never ever gave me a note. She said, “just do your thing,” and her feedback was minimal.

The benefits from the Kickstarter were truly an incentive to fans that not only wanted this film being made, but wanted to own some of Dick’s personal career artifacts. These were items from his house, so I was wondering if as you filmed him showing off these signed scripts or props, did you think these were good items to help fund the project?

Absolutely! Well, he was really happy to clear out his garage. For those Kickstarter incentives, you want it to be something you can’t get any where else. But I told Dick, I don’t want you to have to part with anything you don’t want to.

So we went through all of the scripts, and he knew that he was giving this to fans, helping the film and helping his wife. Then, most of the folks in our documentary helped us make it by donating items for the Kickstarter also.

How many hours of footage did you shoot of just the Millers? It seems like they were always together.

They were and they always are together. I don’t think it was a ton of stuff, but we worked pretty precise. We shot off and on since August of 2011. Every set up that we went to do was used, and we pulled the best stuff out of it.

Approaching the subject, did you feel in some way you were doing something that had been done a million times? There was that great Corman documentary a few years ago, you did American Grindhouse…

And Machette Mavens, yeah all that stuff. Well that was the fear. You’re certainly mining from the same territory, but I generally feel like we got lucky because there are things that have never been told before.

Yeah, and even the piece with Roger about A Time for Killing, which he sort of erased from his own history. How could I not use it. We didn’t know until we asked about these things. I gravitated towards that stuff.

I was actually surprised that there wasn’t a lot about Dick’s service to the country during WWII. Does he not like to talk about it?

Well, he doesn’t that much. He acknowledges it, and his brother was in it more. Dick is not someone that volunteers information and we sort of got what we got.

He survived it. He didn’t see a whole lot. But that’s all “according to Dick.”

But yet one of his best known characters is WWII veteran Murray Futterman, so I always assumed that was really him.

That’s funny. Yeah, and he and his wife [in Gremlins] look like they could possibly be Dick and Lainie in real life.

Who is today’s “Dick Miller?”

Dick Miller is today’s Dick Miller. There are actor’s now that are part of that ambiguous player thing. There was even that documentary a few years back called The Guy That Was In That Thing.

But you hit on something in the film that Dick Miller really gave each part his all, and ended up in some starring roles from that.

Well that’s the thing. Dick really is a character actor star. There is something magnetic about him. Some sort of twinkle in his eye that makes you remember him. That’s my perspective, and it really was from Joe Dante’s movies where I felt someone was seeing if I was paying attention by the casting of this same guy over and over again.

Well, now when you see him these days on screen, there’s always someone in the audience that goes a little crazy. I remember that happening recently watching The Hole.

Yes, that happens. He’s in Joe’s newest film too, Burying the Ex.

What are your plans next? Any related stories to the genre you want to tell?

That’s a good idea. I keep doing DVD extras, and I have a few more coming out. I did a whole thing for Kino Lorber on Pete Walker.

There seems to be no shortage of obscure horror and cult films being rediscovered on Blu-ray or DVD.

Yes, but that market is shrinking. DVD extras are no longer the clincher to get you to buy something on the release. Now it’s a bullet point on the back of a box. Distributors don’t really have the budgets. I can do something much bigger with Dick Miller, and do it as a feature and get a bigger audience.