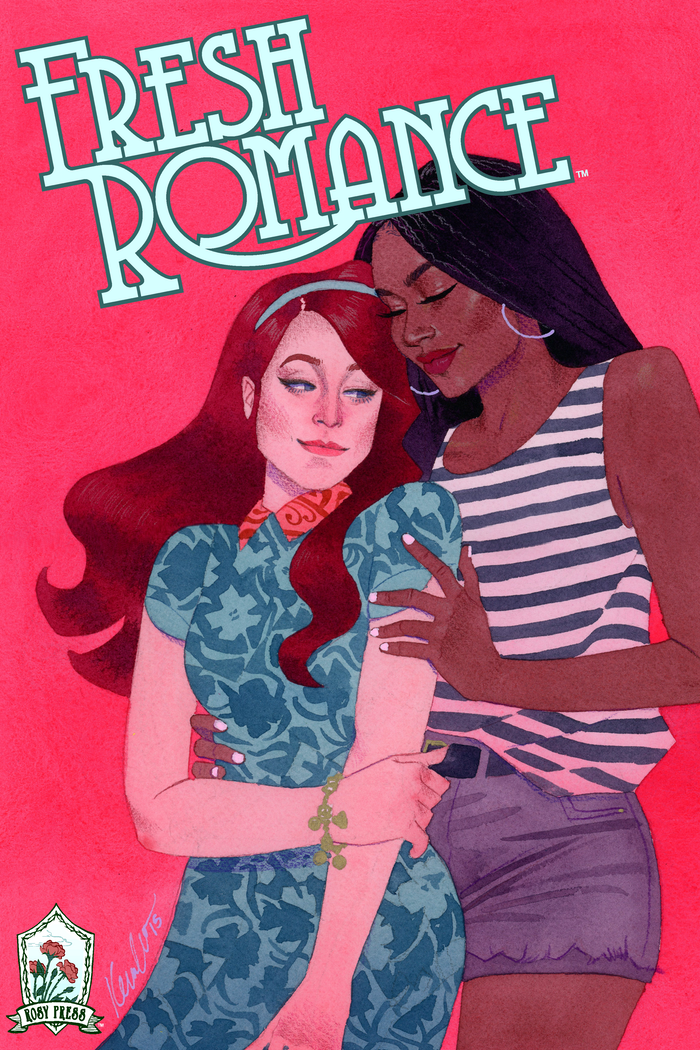 In addition to three forward-looking romances, each issue of FRESH ROMANCE delivers a relationship advice column by a quartet of divorced writers, behind-the-scenes art coverage, and a fashion report. 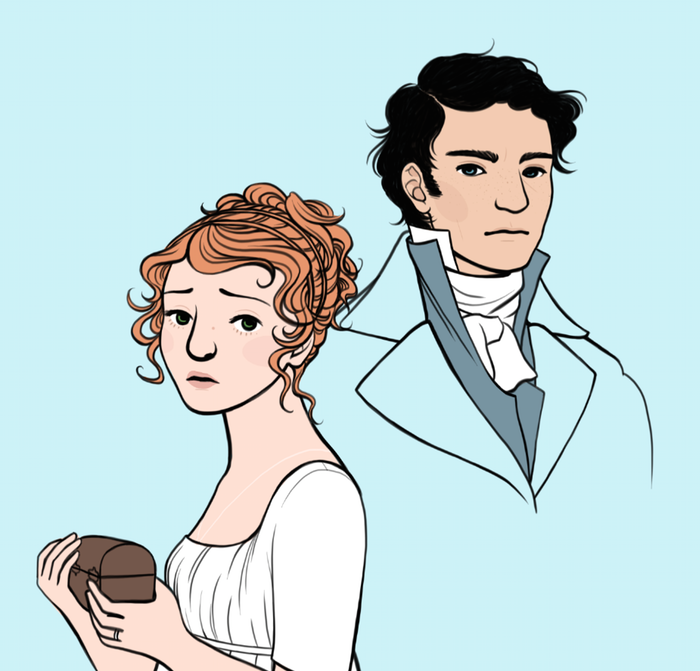 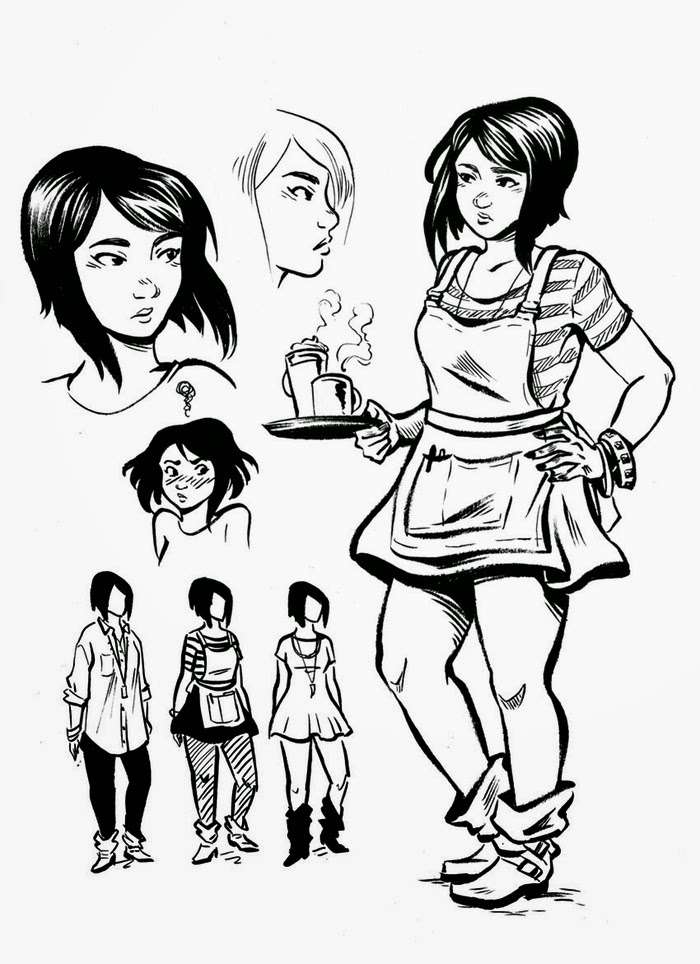 The first cover (the illustration in our header) from Kevin Wada, a former fashion illustrator, who uses his hallmark watercolors to depict Leth and Jovellanos’ high school heroines.

Rewards available exclusively through the FRESH ROMANCE Kickstarter campaign support three-month, six-month, and ongoing subscriptions, including the opportunity to be drawn into a story, an original comic to propose marriage to your loved one, and one-of-a-kind prints and commissions, including: Five commissions by Chris Burnham (BATMAN, INC. THE UNNAMED); a Gene Ha (TOP 10, 4-Time Eisner Award Winner) sketch commission; a Dustin Nguyen-drawn original page from the Stephanie Brown BATGIRL series; a commission of Harley Quinn by DC and Marvel artist Carmen Carnero; and an original page from the Stephanie Brown BATGIRL series drawn by Pere Perez.

“With our digital platform, FRESH ROMANCE can reach a diverse set of readers,” said Asselin. “FRESH ROMANCE is the comics answer to the popular modern romance novel, and we can digitally deliver it to anyone, anywhere, anytime.” FRESH ROMANCE content will be available in a variety of digital formats: via ComiXology or as a PDF, CBR, or ePub file, and will always be DRM-free. Unlike their real-world counterparts, FRESH ROMANCE stories never end – they will later be published as ebook collections.

“Thanks to our ongoing anthology format, the kinds of stories we feature will be constantly evolving,” said Asselin, who recently appeared in the documentary SHE MAKES COMICS. “The magazine will be R-rated, so while not all of the individual chapters or stories will be racy, there will be some adult content. These aren’t your mom’s romance comics. Our goal is to bring avid comics readers and those new to comics together to enjoy the romance genre.

Janelle Asselin is the Senior Editor at Comics Alliance and a freelance writer and comics editor. In her ten years as a comics pro, Janelle has also worked for Newsarama, DC Comics, Fangoria Comics, and Disney Publishing Worldwide. At DC Comics, she edited BATMAN, DETECTIVE COMICS, BIRDS OF PREY, and KNIGHT AND SQUIRE. Asselin is also an outspoken advocate for women in comics, and has worked to bring awareness to sexual harassment and discrimination issues in the comics industry. A lifelong scholar, Asselin holds a BA in English Language and Literature from Southern New Hampshire University and an MS in Publishing from Pace University. She lives in Los Angeles with her awesome husband and the best cats in the world. Visit her onine at www.rosypress.com, https://janelleasselin.tumblr.com/ and on Twitter @gimpnelly.

Kate Leth is a writer and artist best known for her webcomic Kate or Die and her work on the licensed comics Bravest Warriors, Edward Scissorhands and Adventure Time. She has a lot of tattoos and feelings.

Amanda Scurti is an illustrator, cartoonist, and colorist. She is a graduate of SVA and, when not voluntarily drowning herself in comics, enjoys petting dogs.

Sarah Vaughn is the co-creator and co-writer of Alex + Ada with Jonathan Luna, published by Image Comics. She is an avid lover of historical romance novels and vintage romance comics.

Sarah Winifred Searle hails from spooky New England, where she writes and draws comics about relationships, history, and mysteries. You may recognize her work from Smut Peddler,Colonial Comics, Symbolia, or a bunch of other cool things. She is also exceptional at petting cats. Learn more about her work at swinsea.com.

Sarah Kuhn is the author of the forthcoming Heroine Complex trilogy, starring Asian American superheroines, for DAW Books and the geek romantic comedy novella One Con Glory, which is in development as a feature film. Her writing has appeared in Uncanny Magazine, Apex Magazine, The Hollywood Reporter, Back Stage, IGN.com, StarTrek.com, Geek Monthly,Creative Screenwriting, and the anthology Chicks Dig Comics.

Savanna Ganucheau is a colorist and illustrator currently living in Melbourne, Australia. Originally she’s from New Orleans, Louisiana, and misses it dearly. Honestly, she could really go for some boiled crawfish right now. She loves to make friends and talk to people. Chat with her Twitter – @srganuch anytime!