ShareTweet
The Force is strong with this app…

A long, long time ago, in a generation not too far away, young jedi-wannabes around the world had merchandise to relive the excitement of STAR WARS before the next theatrical re-release or sequel.

Not that this has changed in any way, but back in the late 70s it was pretty much the action-figures, the photo books, the soundtracks, the lunch-boxes, the bedsheets, the pajamas, the collectable glasses, the cereal, and my personal fave, the Topps trading cards.

I had been collecting non-sports related cards from Wacky Packages and had a handful of Mars Attacks, but there had been nothing like the collect all by-ay-means-necessary Star Wars tie in.

Launched in 1977 to coincide with Episode IV: A New Hope, the packs promised a sticker in every pack and a powdery stick of bubble gum – chew or chew not. There were a total of 5 series for the first film, but not surprisingly Empire Strikes Back and Return of the Jedi cards to hold us over just in time for home video to become a replacement. 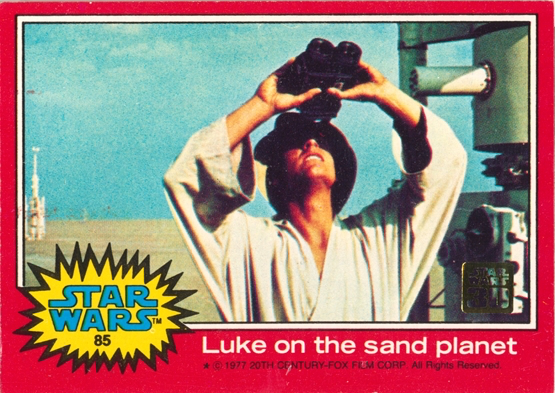 Against the odds in our digital age, Star Wars trading cards have hung in there, and Topps even crossed over to the dark side of parody with their Wacky Packages: Star Wars mash up last year.

I’m not a digital comic person, so the idea of digital trading cards nearly kept me far, far away from even downloading the app. But only seconds into exploring it, I was caught in its tractor beam.

A few reasons why: 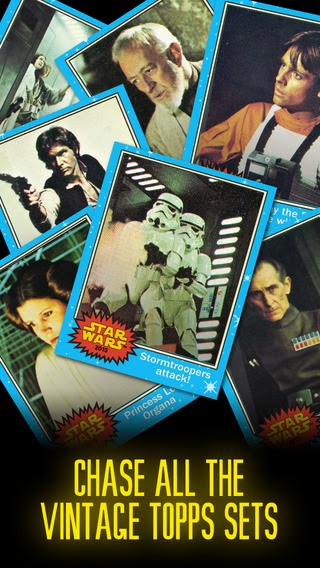 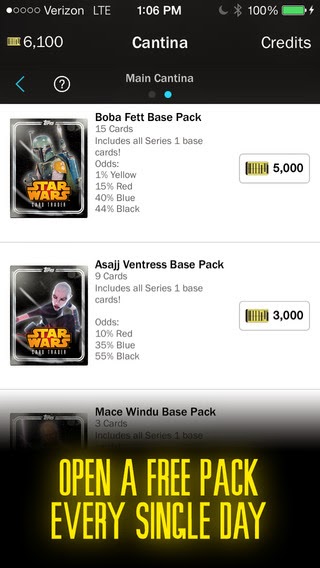 IT’S FOR THE FANS

IT’S FREE (FOR THE MOST PART)

Unless you really get hooked and want to go all out credit-wise, the majority of cards to collect on the app are assigned randomly, in packs, at credit levels. You can earn additional credits just for showing up daily, or you can check out their sponsored links for additional free credits once you’ve spent your payload faster than a deal gone bad in Jabba’s Palace. You can, however, pay hard cash for credits if you want to go full-on collector.

Set your avatar as part of the Galactic Empire, Republic, an Independent, the Rebel Alliance, or Separatists and add a descriptive role (9 out of 10 chose Bounty Hunter, because, well, what else?). You can chose a unique profile name and give yourself a photo representation. I’m SMELLYTAUNTAUN and I’m technically a Battle Droid.

Friend me you will, trade cards with me you must.

The company encourages you to “trade like a Jawa,” meeting real people, making friends, completing trades and building your collection with confidence using features like 9-for-9 trading and Trader Ratings to highlight your trading partner’s trustworthiness.

There are a set of STAR WARS: THE FORCE AWAKENS cards already on the app for the collecting, and not surprisingly they’re all really just screen-grabs from the trailer.

HOWEVER, they are one step closer to the actual movie nearly 8 months away. These new cards are really fun, designed in the spirit of the original vintage look of the 1977 ones. They even have the great 10 words-or-less descriptions giving us character names to go with the trailer’s visuals. 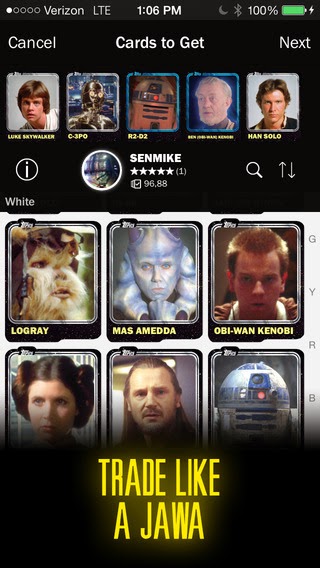 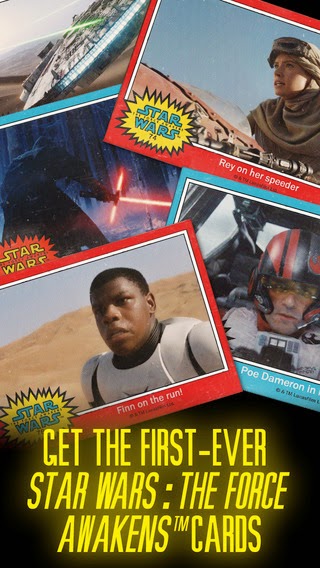 Topps VP of Digital Michael Bramlage says “the app is [already] revolutionizing Star Wars collecting.” The press release from Topps says it best – this is a 24/7 Star Wars card convention that you can take with you anywhere you go.

Written by Greg Pak Art by Raffaele Ienco Published by Marvel Comics   Dark Heart of the Sith has shown Darth Vader at his most...