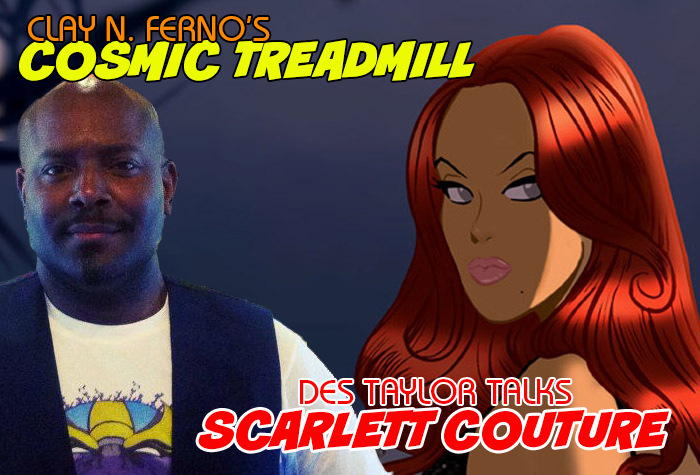 You might recognize the work of British artist Des Taylor from Titan Comic’s Doctor Who covers and his unique Despop illustrative style found also in Cosmopolitan, FHM and many more high end clients.

His full-length comics include leading ladies The Infamous Katie Rogers and The Vesha Valentine Story.  He continues the tradition of sexy and deadly femme fatales with his latest Titan book, Scarlett Couture. 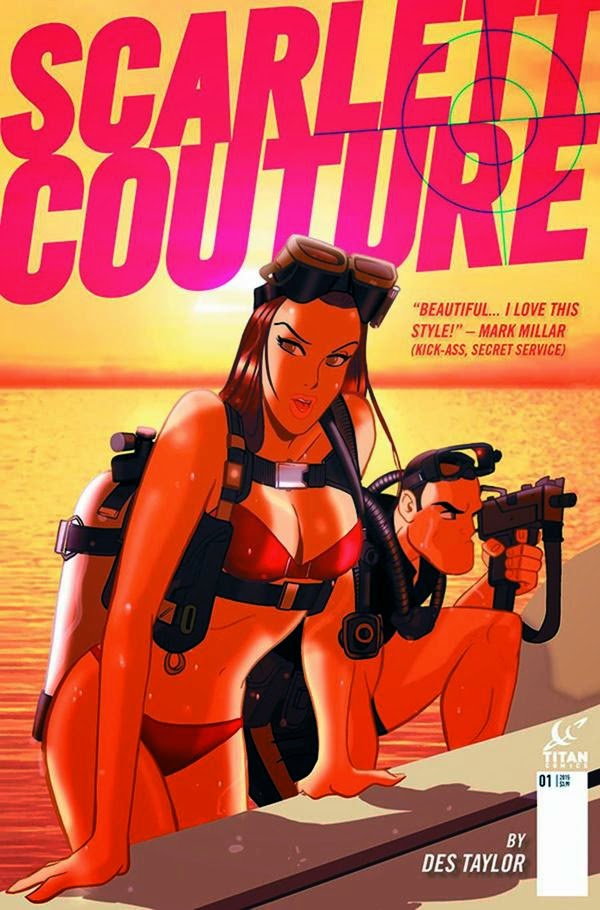 Des joins us to take a ride on the Cosmic Treadmill to tell us skinny on his latest lady spy mini-series!

FOG!: Thanks for joining us today, Des! We’ve been enjoying your Titan Doctor Who covers. Tell us how Scarlett came to be!

Des Taylor: I explored the world of fashion with Katie Rogers (my first book) and gradually started to get a feel for Scarlett’s world.  Around then the show Alias was running and I was hugely inspired. 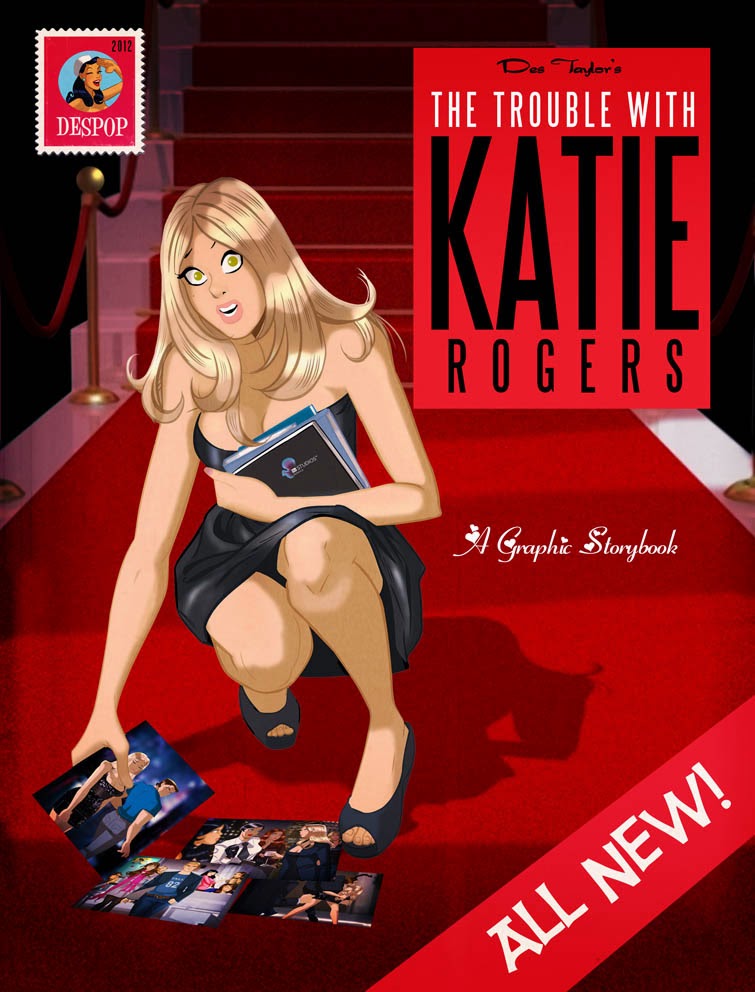 Later that year at a party for Cosmo, the character and all the other elements fell into place when I saw a group of girls walking past security and into the VIP area to get to a celebrity football player. I thought to myself,“What if that was some sort of Billionaire Criminal… and the CIA needed to gain access to him to plant a bug? What better way than a group of supermodels that can placate his ego… and at the same time plant the device on him?”

I went home that night and penciled the character that night.

I needed a better name though. Something that combined fashion and action. I started with the name Suzy Fortune (named after a friend from college) but it was only after I watched the Devil Wears Prada and a scene that mentioned the “Couture collection” that light bulbs started off in my head.

I always wanted to name my daughter Scarlett after the beautiful actress Scarlett O’Hara.

Thus, Scarlett Couture was born back in 2005. 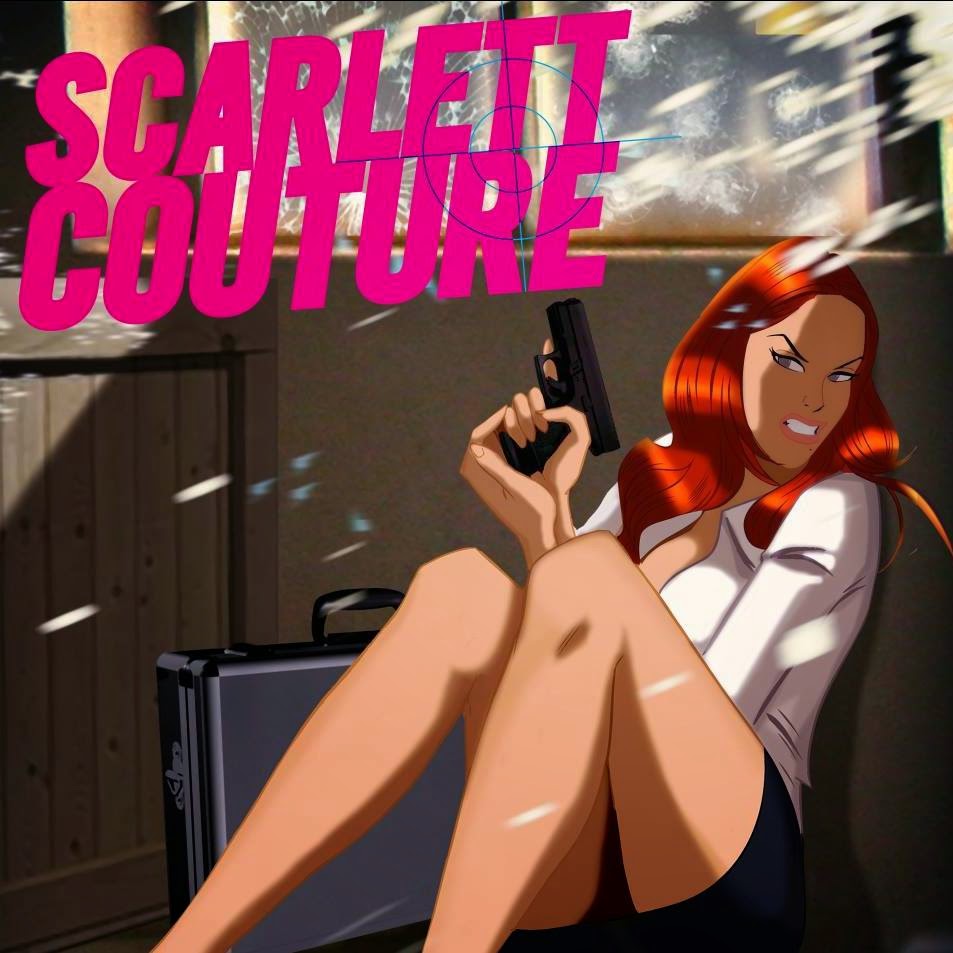 In 2012, I had a daughter which we named Scarlett.

Stylistically, this book is a bit different. How do you achieve the look of the book with computer illustration, yet with a natural feel to the action?

I literally work like an animator putting every element on separate layers in the PSD file. That way I can be more versatile and move layers around, create depth of field and add effects. Steve White (Editor in Chief) once said it looks like animation stills put together to tell a story, which is the desired effect.

Scarlett is a second generation spy, will we hear more of her parent’s origin?

The way I’ve set up this first book is to introduce the main characters to the reading audience and set up the scenario for a future story. In Series One of Scarlett Couture I just wanted to touch on certain elements that will make the story more engrossing down the line. Scarlett’s mother’s past is one of the main stories that will test Scarlett’s psyche, resolve and trust.

It is hard not to fall in love with Scarlett, but yet she is tough and has a lot of skills. Do you think it is a challenge for people to write female action heroes? My favorite characters on Agents of S.H.I.E.L.D. are Agents May, Skye and Bobbi because they are smart and kick-ass. 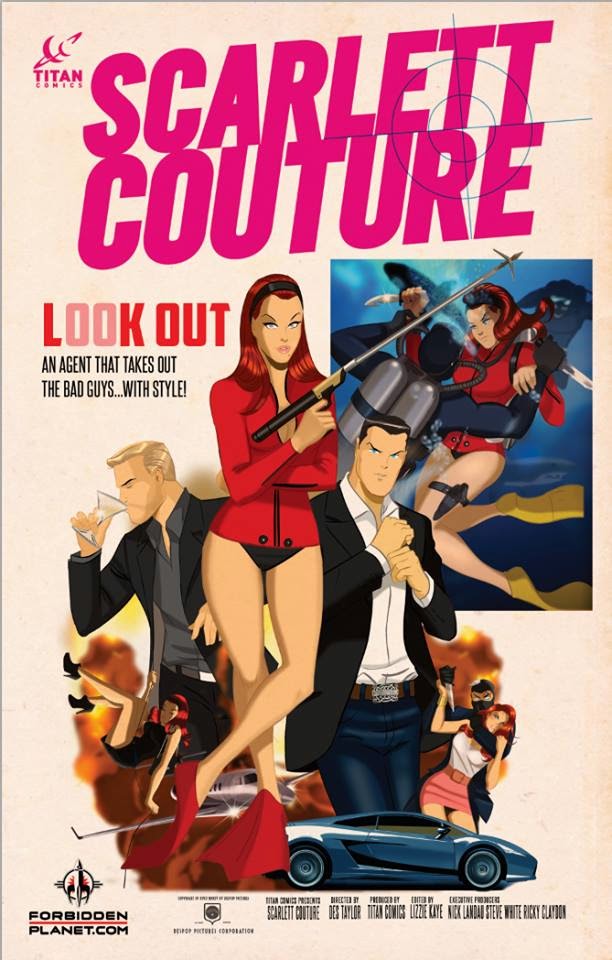 It is hard to write female action heroes because most action writers and artists are male.

I remember a friend of mine asking me if I was watching 24 one year. I told him no, I was too into Alias. I showed him a scene of Sydney Bristow fighting a bad guy and he laughed his head off when she took a kick to the face. “No woman would stand after that kick” he remarked. I later asked him “ Wouldn’t you be proud to have a woman that could fight like that?”

He answered “Are you crazy? No man wants a woman that can kick his ass!”

Maybe he was right. What woman (apart from Gina Carano or Ronda Rousey of course) would stand there and trade blows with some muscle-bound meathead ?

Why can’t she be a thinker? Instead of Kickboxing and Tae Kwon Do, why can’t she use close quarter martial arts like Wing Chun and Aikido? Or learn to fight and run with Ninjutsu?

Those two moments stuck with me and helped when defining Scarlett’s character.

I also remember a conversation with a film producer at SDCC back in 2009. When I asked him why aren’t there more female action stars or female lead action blockbusters like Die Hard and Bourne.

His reply astonished me. “In Hollywood, women aren’t seen as being capable in real situations. Give them a Science Fiction film like Tomb Raider, Underworld, Resident Evil then their more believable. Put them in a setting like Bourne, getting shot, taking a beating and saving the guy the audience won’t buy it and no studio is going to invest in that.

Now every time I saw things like Lara Croft, The Bride, Sarah Connor, Ripley and such I understood where he was coming from. As you say, you like the women on S.H.I.E.L.D. because they are smart and kick-ass.

When describing female characters we often hear the words strong, independent and smart. We need to see some that are observant, cunning, tactical and calculating. I try to put some of that in Scarlett.

What has been the reaction of female fans to the series?

HAHA! Well, it’s out officially on the 29th of April (today!) so I’ll get back to you on that. But I can say the response to the artwork has been tremendous and I’m really honored about that. Especially when I hear when the girls want to cosplay the character. I wanted to create a character that didn’t need a costume but could look like any person you see in a fashion magazine or red carpet event. 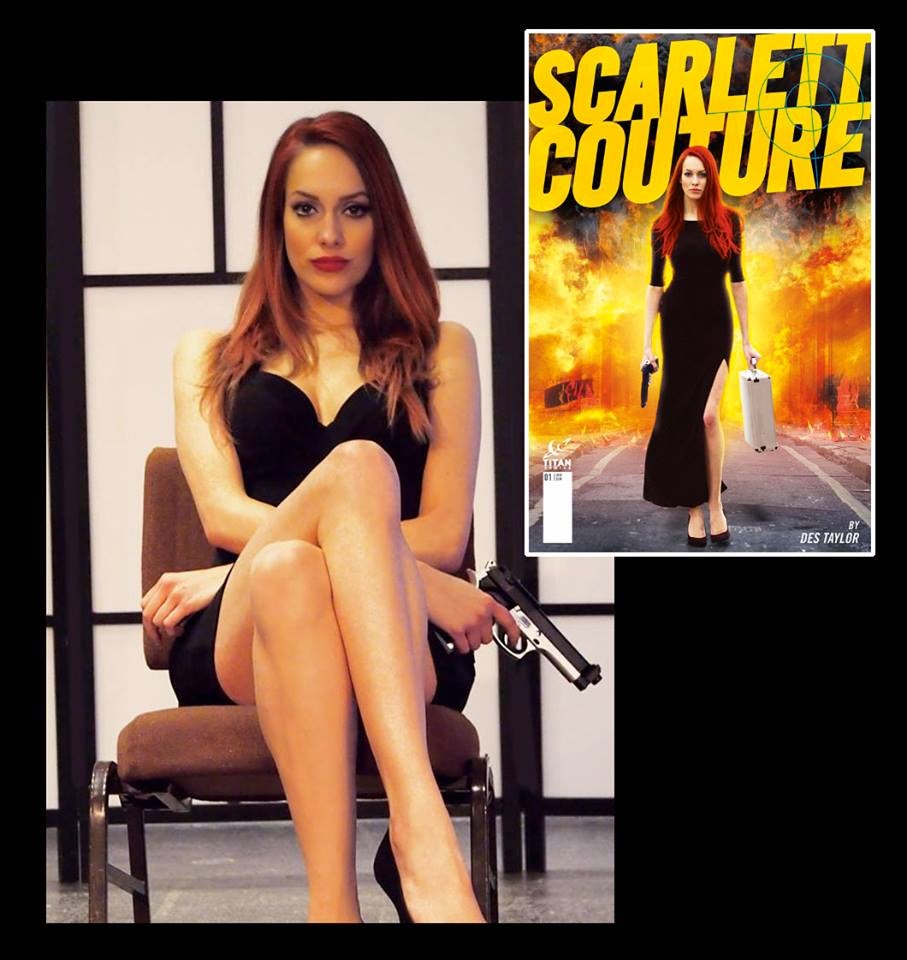 Just look fabulous and you can be Scarlett or one of her operatives.

I also have a soft spot for the spy-fi genre and G.I. Joe franchise. Will Scarlett be getting any cool gadgets to play with?

I always get asked that question but I have to say Scarlett uses tech that is in operation today or in the concept stages. Sure she has access to military grade equipment but you won’t see her with an exploding pen as such. She does have however a false thumbnail which hides a Razor Blade. Easy to cut through ropes when her hands are tied. If it’s handcuffs… she has a small plastic key disguised on the clasp of her belt. She also wears a Flash Bang Bra gun holster which conceals a small Glock 30 under her bust. 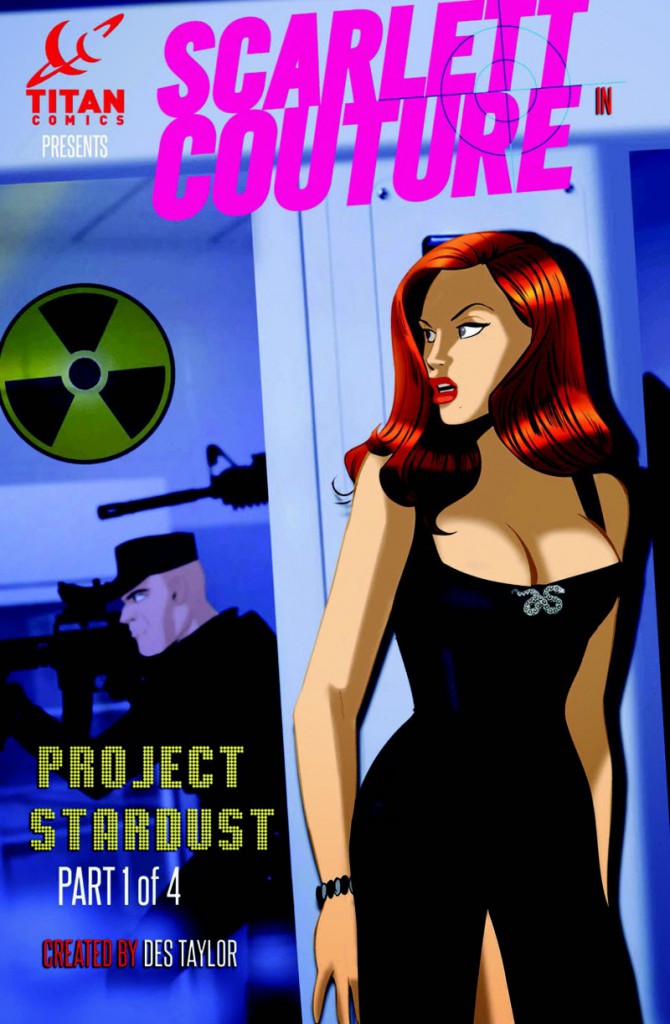 What motivates Scarlett to be the best spy she can be? Is it her past or her loyalty?

It’s part hearing the tales of how great her mother was as a spy, dealing with being a helpless hostage at a young age and the other trying to prove to her handler that she is capable of getting the job done. Her primary role is gathering intelligence so other agencies can act. Scarlett’s problem is she can’t just sit there when she can do something about it. Something that could have consequences later in her life. 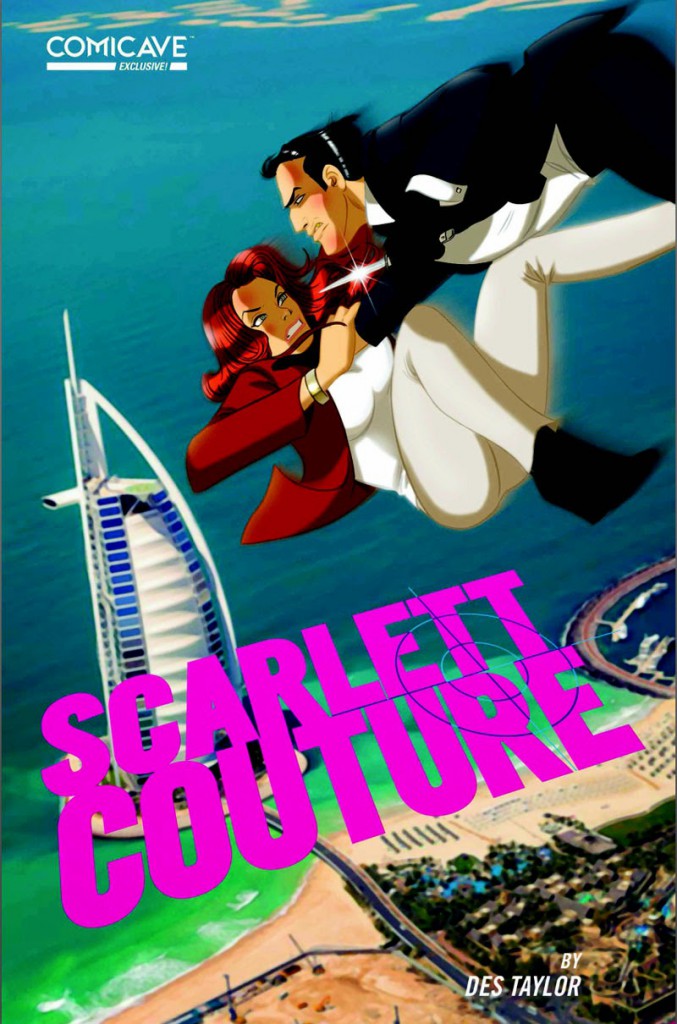 When I first conceived the story I planned to just create 4 issues and be done with it. But as I carried on with the story I saw the potential in creating something fun with a bigger story arc.

I had a meeting with the owner of Titan Comics, Nick Landau, and we talked about continuing the story in another 4 Issue series. So, Scarlett isn’t done yet. She’s just getting started. Hopefully I can find someone to help write it too.

That part has me up all night and in my dreams.

Last question just for fun: Could you see the powers that be cast a female 007?

In this age of rebooting and being void of fresh ideas?

Who knows? I think not. I wouldn’t want it. What would she be called? Jane Bond?

It would be better to create a brand new franchise with a character that is believable and be capable of doing everything that Bond ends up doing on screen. I personally think its time we saw brand new type of female hero on the big screen that has the qualities most male action characters seem to possess.

The closest thing for me is Carrie Mathison on Homeland. She’s a fantastic character ! And I love the girls on the show Strike Back. They are the inspirations behind the characters Sapphire and Stone I introduce in Scarlett Couture issues 3 and 4. I hope you like them. 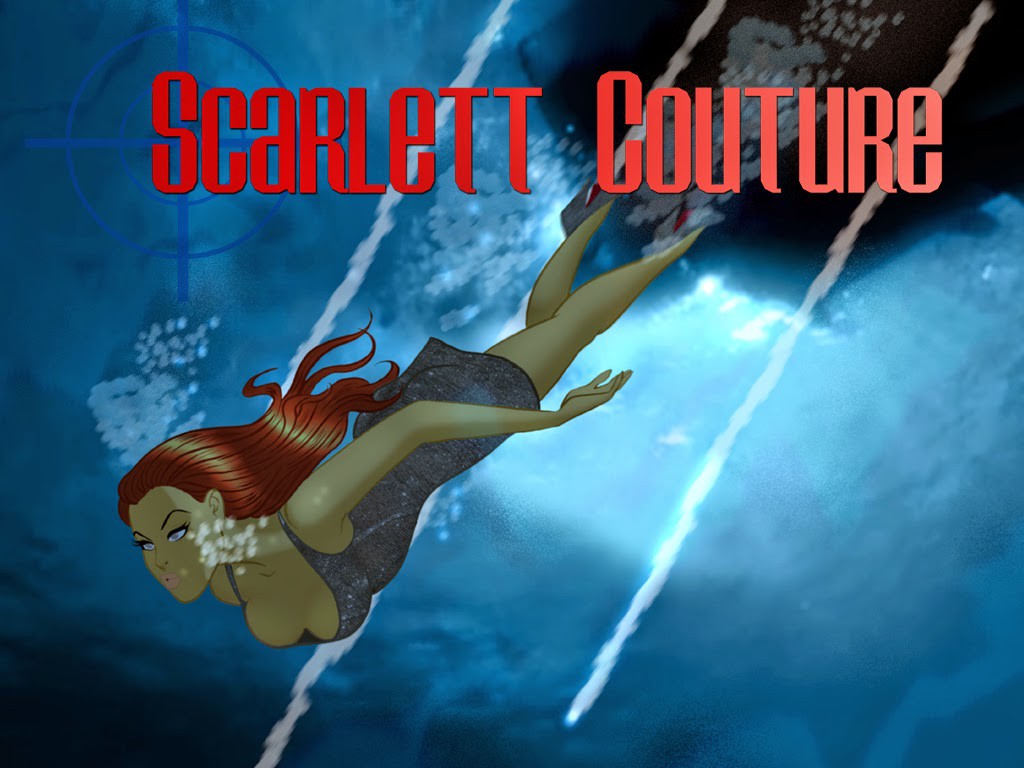