The Revolution with be immortalized in The Order of The Forge coming from Dark Horse later this month.

In the tradition of super-sizing some of our past presidents with powers of the dark arts (see Abraham Lincoln: Vampire Hunter), crime author Victor Gischler (Ink Mage, Spike, Angel and Faith, Sally of the Wasteland) joins us to talk about our founding fathers in a new way.

Starring a pre-Revolution Geo. Washington with pals Paul Revere and “Baudy” Ben Franklin — The Order of the Forge is coming at you by land and sea!

FOG!: Thanks for joining us, Victor! You’ve got a new take on a founding father with The Order of The Forge at Dark Horse. How did you come aboard on Donn D. Berdahl’s original concept?

Victor Gischler: Well, I guess they needed a writer to implement this great idea they had, and Dark Horse editor Dan Chabon suggested I might fit the bill. They wanted to take their story in a pulpy, irreverent direction, and a lot of my work suggest I’m the sort of fellow who can do that. I was just lucky that I’d worked with Dan on a couple of previous projects, so he knew what my strengths were. 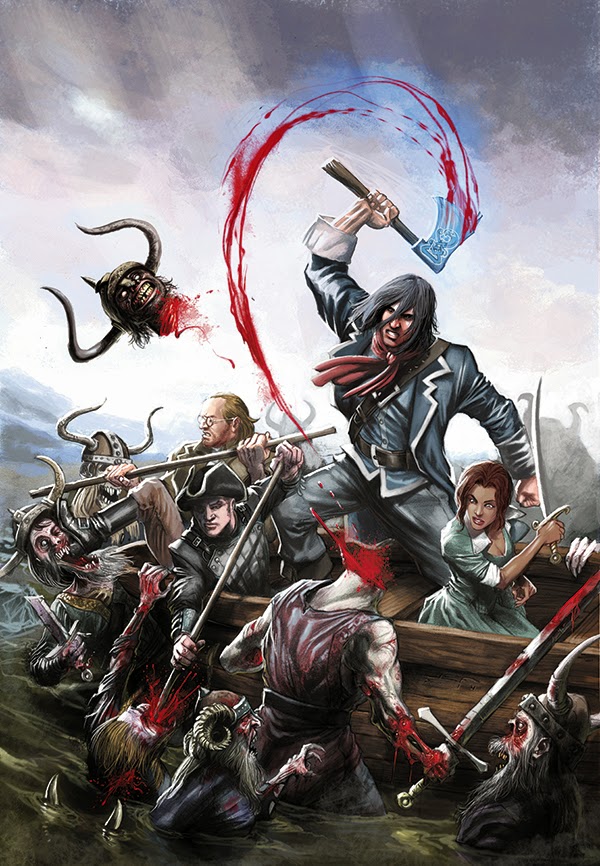 I’m a big fan of alternate history. Would you like to go back and hang with George, Paul and Ben?

Not really. It turns out they didn’t have air conditioning back then. Also the toilet paper was not the best. Also, my guess is that the guys I depict in the comic are a lot more colorful than our actual founding fathers — although I’ve heard Ben Franklin was something of a party animal.

I suppose I couldn’t really say no to a time travel adventure if I had the chance. Although whenever I watch a time travel movie that shit NEVER goes right.

We all know the origin story of our first President. How fun was it to dig up some dirt on the wooden-toothed would-be Commander-In-Chief?

Honestly, we were less concerned about “facts” and more interested in how we could twist legends to our advantage. The “choppy down the cherry tree” story is a perfect example. Tall tales wins over facts and research this time.

So that the readers know what I’m talking about, this takes place while the country is under British reign and George is a young man. How does the cherry tree fable carry over into The Order of The Forge?

Don’t want to get too spoilery, but suffice it to say that the cherry tree story kicks things off for us. We’ve all heard the story. Young George cuts down the cherry tree and is reported to have said “I cannot tell a lie” and confesses to the deed.

The notion of George’s steadfast honesty is something we have a lot of fun with in Order of the Forge. The cherry tree fable is basically a triggering incident. What follows is Coo Coo for Cocoa Puffs!

This appears to be a short run — a three issue mini, like the British TV Sherlock model or perhaps perfect for the trade. Are there any plans on expanding on this story after the mini? Thomas Jefferson perhaps?

Yes, plenty of talk about more. I don’t think it will surprise anyone to hear that further Forge adventures will partly depend on sales of the first three issues. So, hey, if you like it, harass ten friends to buy it too. To be honest (like George!) I would have loved to have an extra issue or two to play with.

Let’s talk about his pal Ben Franklin for a moment. He’s kind of a party animal when we meet up with him. Out of the three men, George, Ben and Paul Revere, who is the worst influence on the group dynamic down at the Tavern?

I think Ben sets a bad example, but Paul seems like the sort to follow along with a really good bad idea. There should probably be a one-shot with just these guys drinking and wenching around town.

Would you say that honesty is your George Washington’s superpower, or his Achilles Heel?

A little of both. It gets him into trouble when a good lie would be really convenient. On the other hand, it good to know the guy at your side is honest. His honesty endears him to the right people. 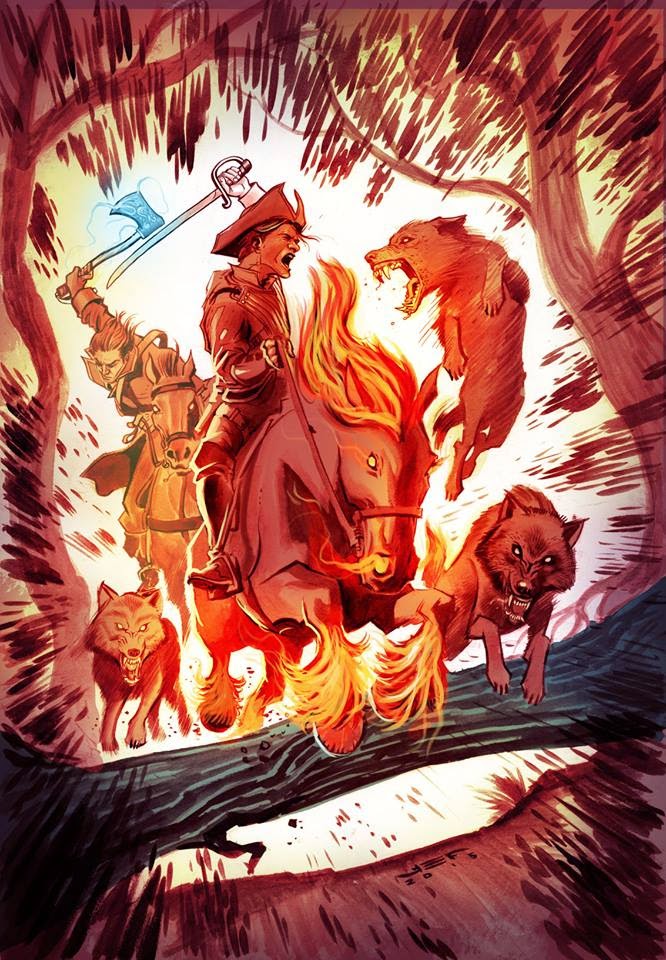 You once again get to work with Tazio Bettin (Sally of the Wasteland, Titan Comics). How is your working dynamic? Does he have insight or ideas influencing the story as well?

Yeah, he’s great and we have very good communication. I totally trust him when he’s designing some steampunk contraption that needs to look cool. I know he’ll pull it off.

Working on Sally was a sheer joy. Check out those ‘Bamazons if you get the chance! And he’s great with details too. In Forge, the bad guys has a private office and I said “fill it with weird arcane stuff” and Tazio totally nailed it.

Lastly — of the Presidents — who do you think deserves the supernatural/ historical rewrite? What could secrets might they hold?