The Last Man on Earth currently is one of my favorite shows on TV.
Ice-T likes it too, as he said on his podcast, so I feel like I chose well.
The run-up to the show was a lot of “how can they keep this going?”

The “this” being Phil Miller (Will Forte) alone for an entire network show. But – spoiler alert – that solitude lasted not even two whole episodes, and since then we’ve seen Phil’s lament become Phil’s constant chagrin.

Last Man quickly moved from a riff on that Burgess Meredith episode of The Twilight Zone to, so far, a study in female-male relationships just left of Jean-Paul Sartre’s adage, “Hell is other people.”

And over time, nearly every scene in the show becomes a tennis match of horribleness with your loyalty to characters as the ball.

You may end up taking each character’s side by the end of any scene.

Phil is a captivating character.


As Phil’s Tuscon, Ariz., attracts people courtesy of his “Alive in Tuscon” signs across America, we get more layers to him. He’s by turns a blustering liar, a selfish conniver, a hapless faker whose schemes always backfire, a failed adulterer, a self-entitled narcissist, an adrift malcontent who has forgotten how to deal with people.
Phil’s also, at times, endearingly sweet, when he’s not trying to stuff down his actual feelings or actual morality. We see this when he confesses his interest in Melissa (January Jones), only to take it all back in an obvious lie when Melissa rejects him.
Or when he tries to maroon Todd (Mel Rodriguez) – Melissa’s lover – in the desert, stops the truck in a literal screaming fit of morality to back up to Todd, then peel off again and back up again until he finally lets him back into the truck.
So after Phil marries the wrong woman for him, falls for another and blows it, mistreats the man who does get her, and then tries unsuccessfully to get with a pair of female newcomers, he meets his biggest challenge and comeuppance yet: a tall, handsome, muscled ex-military man who’s much better looking and skilled.

He’s also named Phil Miller, adding to his threat as a usurper/replacement.


And, because he’s played by Boris Kodjoe, he’s black too.

In my eyes, this matters.

Last Man has spent considerable time picking apart toxic masculinity and competition through Phil and Todd. And while New Phil comes in as the alpha male who outguns the loser-jerk and the nice guy, the racial dimension is not explicit but remains tough to ignore.
In the American racial hierarchy, the white man sits at the top, and his relationship to the black man is built on subjugation and control. From slavery to segregation to the many discriminatory practices and disparities that persist today, it is within the American psyche that black men must remain less-than. He cannot learn, he cannot own property, he cannot stand on equal footing.
Fear is used to keep this together. For black men, it’s fear of what is done to them: terror acted upon their persons and livelihoods, both within the law and without. For white men, it’s fear of losing their place: their jobs, their possessions, their dominion.
Combine that kind of bigotry with sexism, and you enter the dynamic of white men feeling they have to defend white women against black men, who have been stereotyped as animalistic and hypersexual. You enter an especially horrific corridor of Americana in which lynchings and destruction of wholetowns were predicated on a black man purportedly lusting after a white woman, and where Ku Klux Klan recruitment film Birth of a Nation is a cornerstone of cinematic history.
That backdrop of bigotry, fear and loathing presumably would still exist even if nearly all of humanity is wiped out. Phil and Todd but  would have grown up in it, right? (Side note: While Todd is played by a Latino actor, he appears to be presented as white on the show. But then Latin cultures have their own anti-black racial issues, too.)
Phil is our top toxic male, whose bluster and self-importance is fueled by insecurity, scheming and domination.

He attempts to sleep with Melissa the hot girl while married to Carol the crazy not-hot girl (Kristen Schaal, trading on her wit and “ugly-cute” looks to maximum effect).

In doing so, Phil gets his comeuppance in Todd, who is presented as the ultimate “nice guy.”


Fat, understanding, homey and apparently selfless, Todd gets the hot girl, and all the sex with the hot girl, because he’s nice (and the only other guy around).
And then, boom.

Both the self-centered jerk and the nice guy quickly become undone in the face of New Phil. Carol, Melissa, Gail and Erica already rightfully turned on Phil and enjoy New Phil for being the exact opposite while also stupid handsome. And Todd, cracking under his own insecurity and jealousy, throws away his relationship with Melissa after thinking he’s already lost her to New Phil.

I hear it when Phil awkwardly says to New Phil the pot-calling-the-kettle-black phrase and trips over himself replacing “black” with “African-American.” I hear it when Phil meets Gail (Mary Steenburgen) and Erica (Cleopatra Coleman) and lasciviously tells them how he felt about seeing a “hot older woman” and “a black chick,” only for both women instantly to feel awfully objectified.

In another episode, the insecure Todd tells Melissa not to hang out with New Phil any more after they went on a trash pickup job together. I’m not going to say I’m some kind of hot catch (my wife does that), but I’ve had an occasion or two when a white female friend told me later that their ex once told them to stay away from me.
Recall the absolute panic that Todd – unshaven and slovenly in his post-breakup funk – runs out to tell fellow white man Phil – horribly sunburned from his last scheme, stubbly and brokedown-looking (the women, meanwhile, always look put-together if not great) – that the clean-cut, V-torsoed, black New Phil is having sex with all the women?

And that “having sex” is actually that the women used the hot shower New Phil rigged?

Given how we humans sexualize our fears, this could have gone from panic to a masturbatory real fast. The sexualized fears of our society combined with the flattened cross-cultural landscape of 21st-century America have brought about an explosion of interracial pornography, racially driven cuckold/humiliation fetishes and fabled mandingo parties.

Many of them pair a ridiculously muscled and endowed black man with the tiniest white woman they can find. And much of this stuff extols the physical and sexual superiority – muscles, penis, sperm – of the black man compared to his white counterpart.

How likely is it some of that sits in Phil’s dirty magazines?

How can I not think all this when Phil talks about about dominating New Phil to the point of walking around his house naked, only to shrink away (in more ways than one) when Erica shows up. Phil calls into question his skinny, sunburnt body against New Phil’s body – the body that Carol, Gail and Erica are all gunning for.
Phil even asks his “friends” (sports balls with painted-on faces) at the bar whether his own penis is up to snuff against New Phil’s presumably bigger black penis. He even references “penis wars”!

If The Last Man on Earth were on FX instead of FOX, Forte and Co. might be more explicit about all this.
Phil becomes jealous of Carol being attracted to New Phil. Todd becomes jealous of Melissa spending time with New Phil. They also become envious of New Phil having what they do not, from the physique to survival skills.

New Phil has become better than Phil and Todd; he took away Phil’s self-appointed presidency of the USA, both of their women, Phil’s own name, Todd’s knowledge of cows, even Phil’s Jenga game because he couldn’t prove that his piece belongs on top.

So the episode ends as the townspeople overhear Carol and New Phil’s hilariously awful camping-themed sex talk, with Phil and Todd saying they have to kill New Phil.
Even at the end of the world, a black man can’t escape a lynch mob.
But if The Last Man on Earth stays true to its bearings so far, we’ll see another permutation of Phil’s cosmic joke. He’ll plead to the heavens for something, receive the opportunity to fulfill it, then squander it by doubling down.
Phil Miller becomes Wile E. Coyote: a blundering buffoon who think he’s a lot smarter than he actually is, and whose schemes end with him falling flat on his face in the Arizona desert. 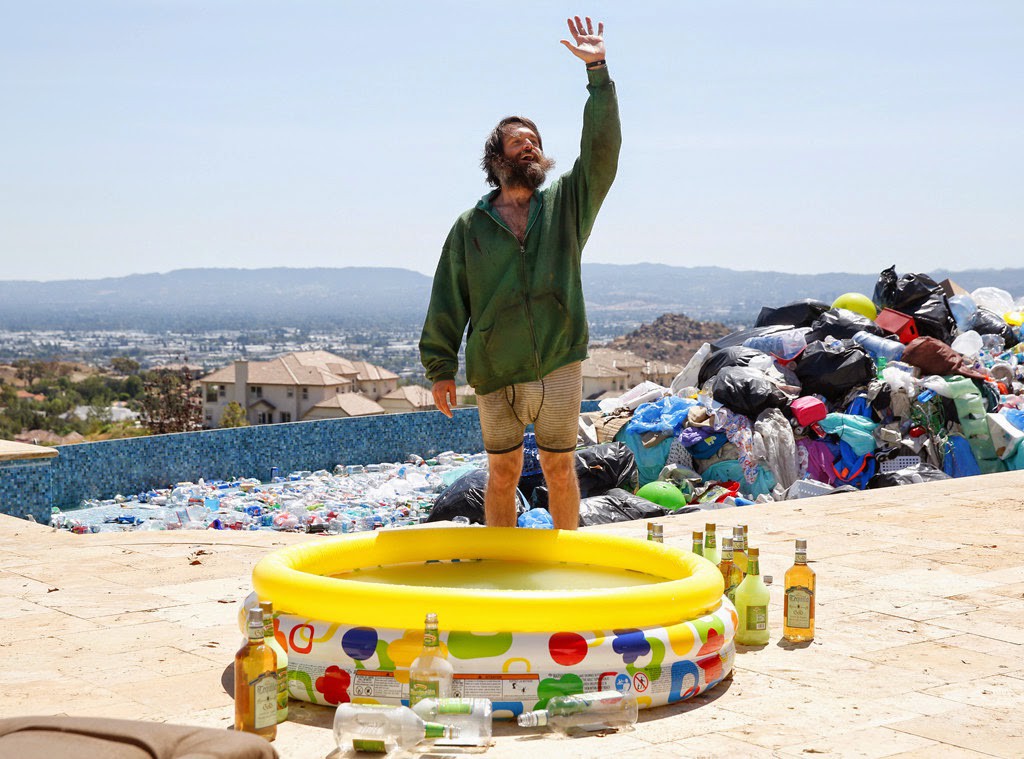