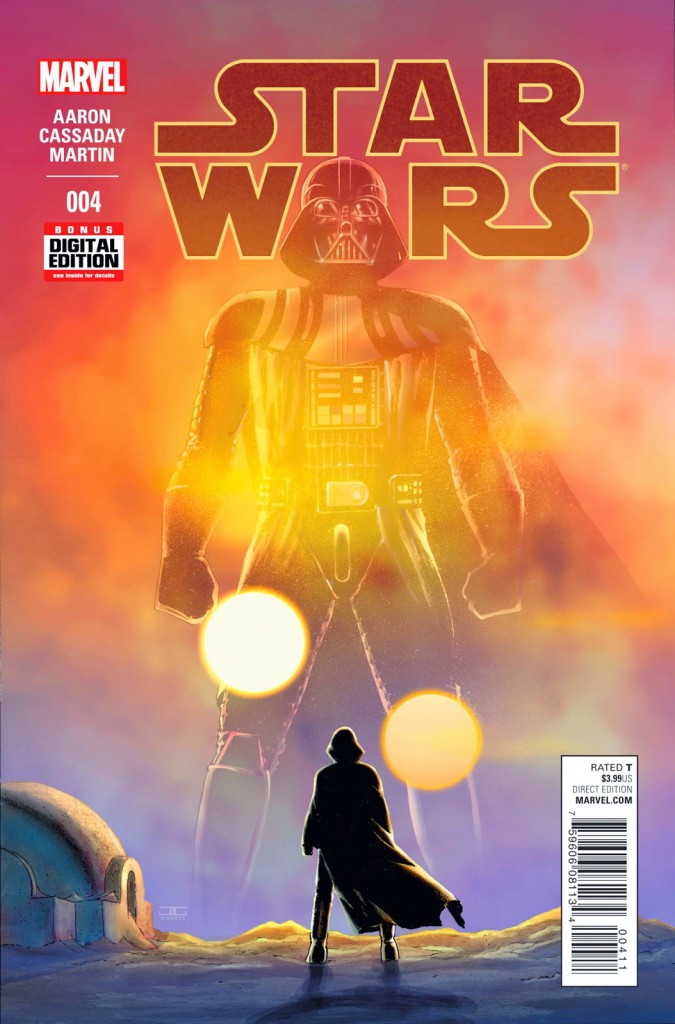 Star Wars #4 serves as the beginning of a new story arc dealing with the fallout of the Empire’s weapons factory on Cymoon 1 being destroyed.

The majority of the book takes place on Tatooine as Darth Vader arrogantly keeps Jabba the Hutt in check while maintaining the assurance of Imperial supplies provided by the mammoth gangster.

Jason Aaron was able to keep the dialogue between the two villains interesting. Vader was steadfast in his demands while Hutt surgically picked his spots to rub salt on the wound of recent Imperial damages. It reminded me of how one would book a match/story in professional wrestling with the idea being one person wins without the loser taking any damage to their credibility or character.

A new character is introduced with a shroud of mystery surrounding his identity.

However, their objective is clear: they want Han Solo. The reason is unknown but methods this new player uses to elicit information suggests that it can’t be good.

We get some time with Luke and Leia, but it came off as an exposition of what’s next as opposed to something in the story that has weight to it. The artwork of John Cassaday made this moment standout to full effect while conjuring up a bit of nostalgia by upping the violence factor in a scene that harkens back to a particular encounter between our favorite smuggler and a certain Rodian.

There is an awesome panel where Jabba comments to Vader “Who knew anyone of note was born on Tatooine, Eh?” as the Dark Lord stares out at the Dune Sea with the reflection of the planet’s two suns in the eyes of his helmet. It was visual poetry that was augmented by the coloring of Laura Martin which spoke volumes because of the emotional implications involved.

As I closed in on the final pages, I was ready to gripe about not learning what’s in the box that Obi Wan Kenobi left in his former estate for Luke in the last issue. My fears were put to rest as the final page reveals the re-introduction of a beloved character that prompts instant anticipation of the coming adventure.

The figure was drawn and colored with a gravitas that commanded attention and respect from the reader. There was a lot of story development in this issue and Jason Aaron does a masterful job of teasing certain elements that were too far apart before and now appear to be closer to each other than ever before. 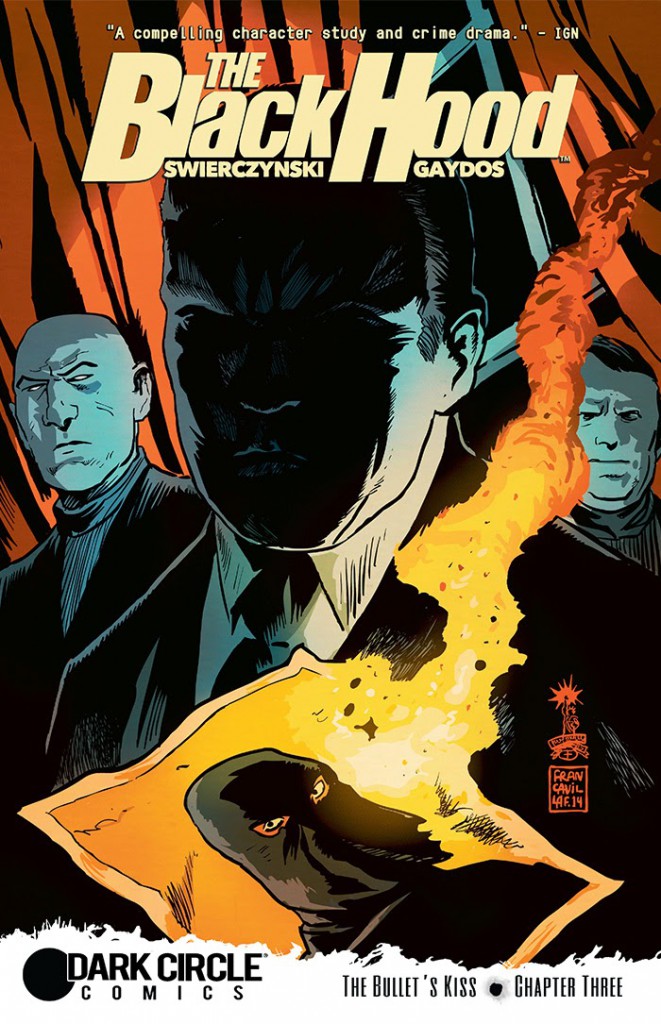 Labeling The Black Hood as gritty would be accurate but also wouldn’t do this series justice.

I felt dirty after reading this issue.

Not simply because of the ample presence of drugs and violence, it’s because Duane Swierczynaski has crafted an engrossing tale that forces the reader into the immoral ridden cesspool known as Philadelphia.

Officer Greg Hettinger, who has unceremoniously taken up the mantel of the deceased Black Hood, has been arrested after being framed for having drugs in his home.

Swierczynaski is able to give the reader a lot with so little such as the phrase, “Who is above you?” which has garnered a lot of unrest within the criminal underworld.

We think of vigilantes, such as Batman, with an extensive repertoire of fear inducing statements. With Hettinger combing the streets and knowing his home town like the back of his hand, it’s all he needs to say while striking the utmost fear among the criminal element since snitching means a guaranteed tag on one’s toe. While the title of the book suggests superhero, it’s really a case study involving a man who is slowly becoming unhinged by his own problems while still finding it within him to take the law into his owns hands.

This sounds like a crazy person, but the narrative paints a different picture that makes Hettinger a fascinating character to follow. One of the other things that makes this series standout is the voice given to Swierczynaski’s City of Brotherly Love. This writer uses his home town as a vehicle so effectively, it becomes an essential character in the story as various individuals echo the typical blue collar and turbulent street mentality of its citizens. This is hard to do if we’re not talking about New York or a fictional city such as Gotham.

Michael Gaydos’ art is so dark and descriptive, that it makes me wonder if the grit on display is exactly what Swierczynaski envisioned when this project was conceived. Kelly Fitzpatrick’s coloring is the visual cog that makes this thing go round and round. Three issues in and it’s clear that The Black Hood is going to be something special. If you’re apprehensive of picking this up on the shelf due to the unfamiliarity of the title and publisher, don’t be. Pick up the first two issues and jump on the bandwagon before it leaves the station. Trust me, you’ll be glad you did. 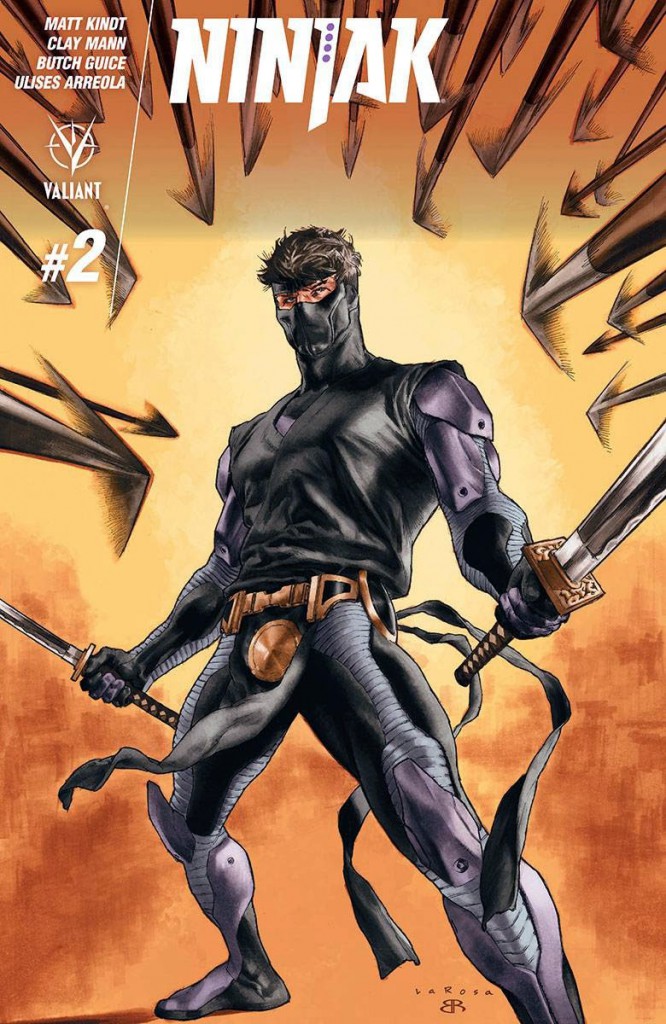 Matt Kindt’s writing is the gift that keeps on giving as his well thought out stories serves Ninjak quite well. This spy thriller is clever at every turn.

Take, for example, Colin King who is in the midst of proving himself to the leader of the Weaponeer group, Kannon. The dude is crazy and makes Colin pass one final test of loyalty….he has to kill a random patron at a night club.

This is the ultimate conundrum that Kindt and the artists handle with style and guile.

Later on, Colin takes a time out from rubbing elbows with Kannon and gets his Ninjak on, going to work within a limited window of time before his new friend gets suspicious.

A worthy adversary arrives to interrupt his plans, and the pacing of this exchange made me feel that the clock was ticking with every punch and kick thrown. With time winding down, Ninjak is faced with another dilemma of escape, and Matt Kindt comes up with another brilliant answer that is also insane.

Besides the fun and fresh story being presented, there is also more insight into the Ninjak character as his time before being a supreme badass is explored. Clay Mann’s artwork makes action unfold like something seen in a movie. Even sedentary moments have a perilous vibe to them as Kannon’s monstrous presence oozes danger with every syllable of conversation. Ninjak is yet another one of Valiant’s recent releases that is bringing the publisher into the limelight. 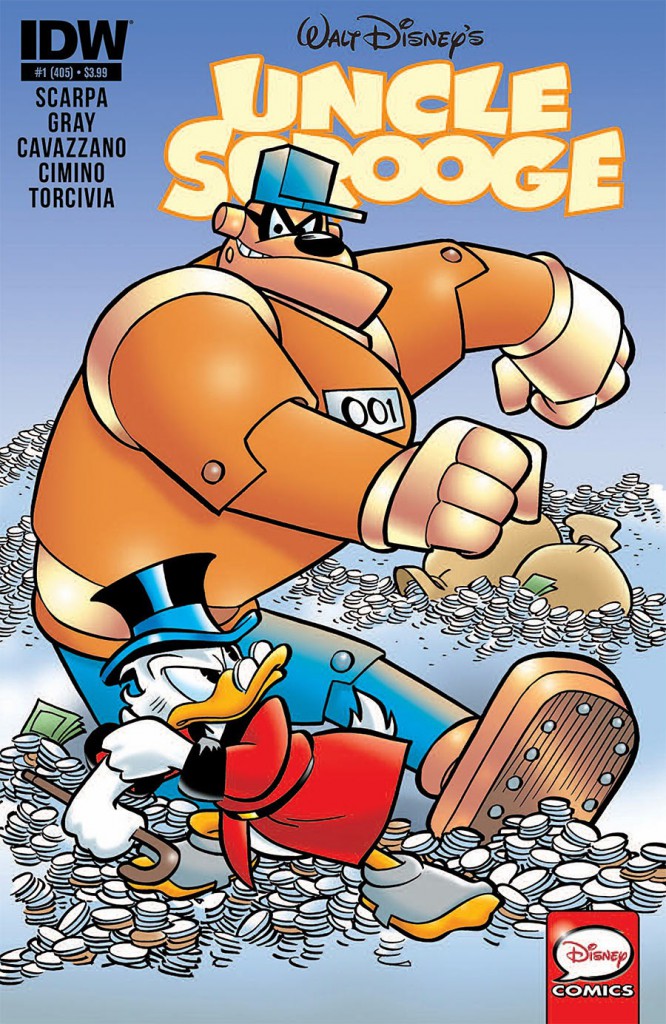 Uncle Scrooge is back in the saddle courtesy of IDW and the first of three stories, titled Panic Mode kicks things off the only way it should: the old duck is worried about his money bin. “What else is new?”, you might ask?

However, the familiar ground is similar to Charlie Brown always missing the football, it never gets old.

Donald Duck and his nephews Huey, Dewey, and Louie are at the side of their crazed uncle as he is scared that the Beagle Boys haven’t tried to rob him in a month.

Once Uncle Scrooge is convinced to let his guard down, the Beagle Boys unleash their plan, and it’s a doozy.

Of course, the fact that the jailbird brothers came up with this plan is a clear indicator that anything that can go wrong, will go wrong. The story tries to sound modern at times with contemporary references to energy drinks, artificial intelligence, and flat screen televisions, but it didn’t feel intrusive because the story and the artwork have that classic feeling longtime fans will remember.

Speaking of fans, some might not give this the time of day because it’s for kids or it looks too old fashioned. I used to wonder why Uncle Scrooge hasn’t opened up a bank account after all these years.

But that’s the gag, and seeing him swim in his own money while being a cheapskate, is something that will always make me smile. Older fans will certainly enjoy Uncle Scrooge and new fans who might have as much reverence for the series are sure to be delighted by the shenanigans inside the borders of Duckburg. 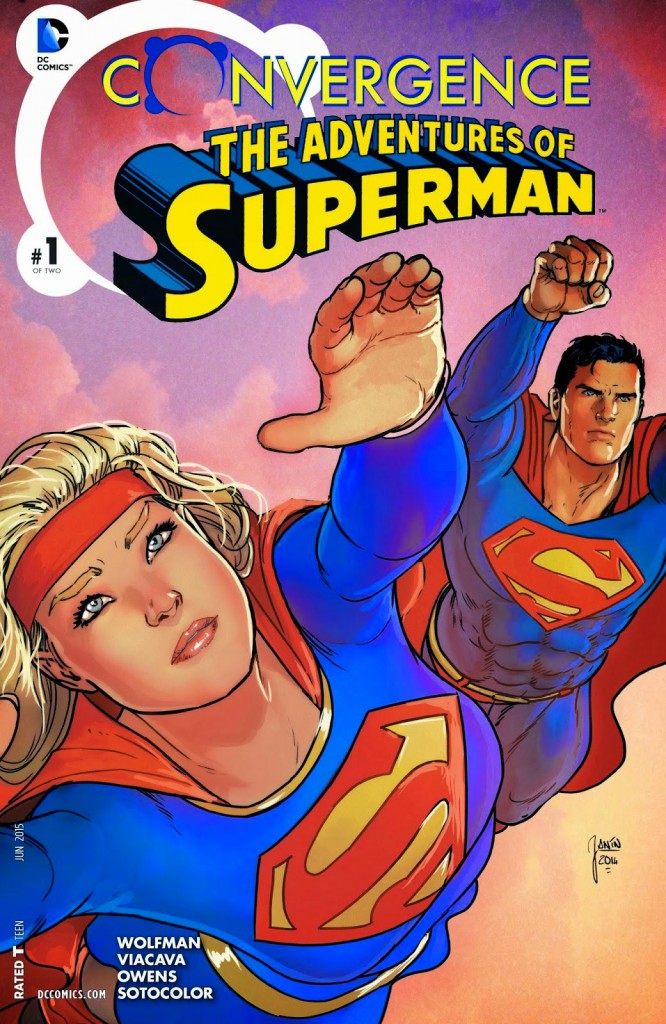 This month marks the 30th anniversary of the critically acclaimed Crisis on Infinite Earths, a 12-issue series published by DC Comics that was written by Marv Wolfman and illustrated by George Pérez. The story revolved around the collapse of all universes with The Monitor looking to save things and the Anti-Monitor attempts to destroy all of the Earths, with the end result being one universe surviving.

Yeah, that didn’t really work out as now in 2015 we have Convergence.

Multiple versions of heroes and villains from different universes battle it out until one world remains. Forget the fact that some of the universes such as Flashpoint are an anomaly that shouldn’t even exist, but here we are.

The Adventures of Superman #1 is a tie in that opens up with Superman and Supergirl of Earth-1 trapped under the dome at Waynetech with Lucius Fox. As things progress, the super powered duo run into some criminals from the Phantom Zone and Superman is captured while Supergirl escapes.

Marv Wolfman did a tremendous job of making this feel like an 80’s comic book, and I mean that as a compliment. Supergirl is the star of the show and Wolfman writes the character with such a heroic voice that it made me realize how much I miss this incarnation of the character since recent versions are of the teenage angst variety.

The money moment of the book comes when Supergirl gets sprayed with green gas which causes her life to flash before her eyes, highlighting the past and previewing her Crisis death. Knowing what’s to come, Supergirl moves forward with the strength and courage to what needs to be done. Oh, did I forget to mention that Gotham City is dealing with gorillas riding horses are running a muck?

This is my favorite Convergence moment so far, and I believe this should have been a main issue within the series instead of a tie-in due to how is harkens back to its universe ending predecessor that started it all.

If you live and breathe by DC Comics continuity, there are some plot points that will startle you. In the end, it’s all too convoluted and I’ve stopped caring. Just tell me a good story, and Wolfman does in spades.