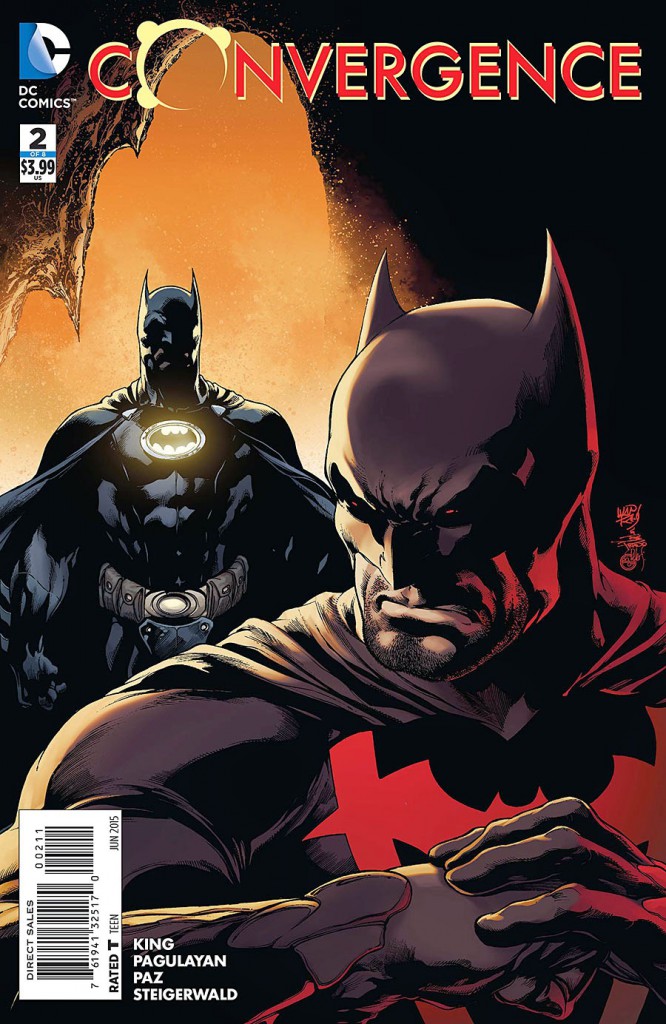 So far, Convergence has been either hit or miss, depending on what tickles your fancy.

It’s not just enough that various worlds in different universes are being forced into battle with one another. The humanoid known as Telos is pulling heroes from different time periods within a particular world, such as the leather jacket wearing Superboy, who was introduced in the Death of Superman, finds himself fighting Kingdom Come’s version of the Man of Steel.

Earth 2’s Dick Grayson is the narrator of events that leads to the heroes of his world battling Telos.

Jeff King was able to make this feel as if you were watching everything unfold from a personal perspective, which made me appreciate everything more.

The cover of the book really says it all as Thomas and Wayne meet face-to-face and it was done with the right amount of emotion…meaning that not too much was shown, but it spoke volumes considering we are talking about two different versions of The Dark Knight.

The artwork is at its best during the action scenes. There is still a lot we don’t know about Telos, so it was fun to see Earth 2’s Superman, Flash, and Green Lantern knock him down with what looks like the knockout punch, only for Telos to rise and create a gloomy situation. When the two versions of Batman met face-to-face, for a reason I can’t understand, the Bat symbol on Bruce’s costume kept changing from the classic circular insignia with the yellow background to what he wears presently in the New 52.

The endless amount of possibilities surrounding Convergence is the selling point of this series, and it’s fitting to present such a storyline before the DC Universe reboots, yet again. However, some of these multiverse dream fights are done without substance which makes for a hollow experience.

While I still have no idea where the overall story is heading, the sophomore release of Convergence gives readers a fair amount of meat on the bone with little fat to cut around. 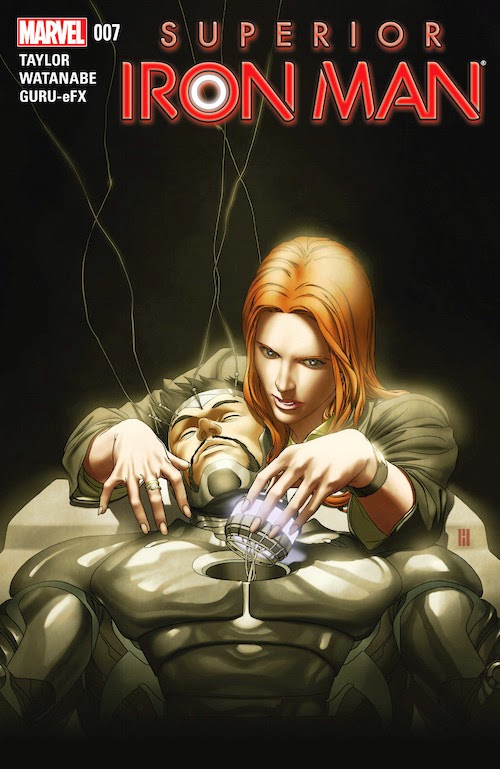 The moral compass of Tony Stark has been put on trial ever since his mind was altered during Axis.

Stark has had opposition in the form of Daredevil and his own protégée/vanity project, Teen Abomination. This time, the person combating Stark is himself in the form of a contingency plan going back seven years.

Tom Taylor did a good job of using this as a reminder that Stark can be thoughtful when he isn’t being an egotistical prick. It was laid out as a battle of who the more superior Iron Man is with the past and the present colliding to dictate the future. The two kept outsmarting each other which was impressive and well-realized considering we are talking about a contingency plan from years prior.

I really enjoyed the artwork, not only from a visual standpoint, but also how well it told the story.

Seeing the Mark II armor was a nice treat and the coloring of Guru-eFX did a great job of making the classic gold and red stand out with that flair of nostalgia without making it look old or out of date.

Tom Taylor and the rest of the creative team have assembled a story that is anything but predictable. Most times, we want the hero to rise, but this time his defeat is the thing we desire the most. Tony Stark keeps going further and further past the point of no return, and it’s so entertaining. Plus, amour fighting amour is always a nice bonus. 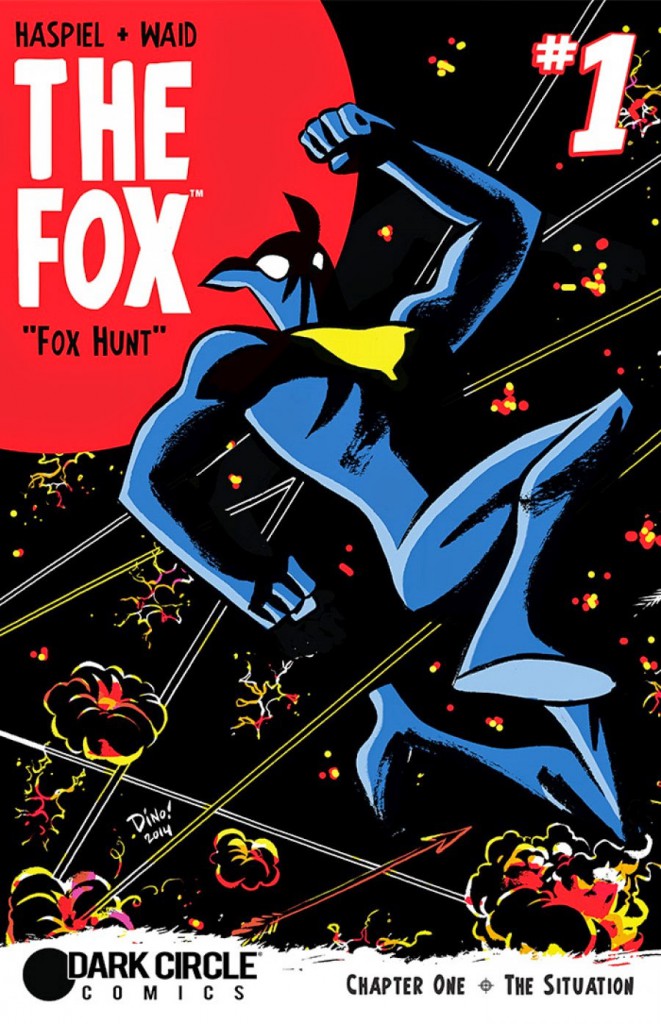 Superheroes that are good at fighting crime, but can’t seem to get their personal lives in order are always intriguing because in a way, it suggests that they care more about others than they do themselves.

Then again, if you knew that the masked vigilante who saved you in a dark alley is also someone who has real world problems like the rest of us, would that tarnish your view of the hero?

Meet Paul Patton, Jr. who is a photojournalist who became a crime fighter in order to find and make stories come to him.

The writing duo of Mark Waid and Dean Haspiel does a great job of fleshing out the Paul Patton character in an introductory sense.

Paul sought out trouble and now it finds him at every turn. Patton’s son also plays a big role and it was refreshing to see that he is actually proud of his father being The Fox. Most comic books show the brooding son or daughter who is distraught over parental issues due to superhero duties.

I’ll be honest, seeing the name Mark Waid on the cover is the reason I bought this book as I wasn’t too familiar with Dean Haspiel’s work. Waid’s script provides the perfect cadence to Haspiel’s story. Haspiel’s artwork along with the coloring of Allen Passalaqua provided an old school vibe that gave the book some credibility since The Fox has been fighting crime for quite a few years now.

Overall, the creative team produced a great first installment. It is not only new reader friendly, but Mark Waid creates a great balancing act of allowing the reader to get a substantial prospective on Paul Patton’s character while providing a bird’s eye view of where the story is headed. 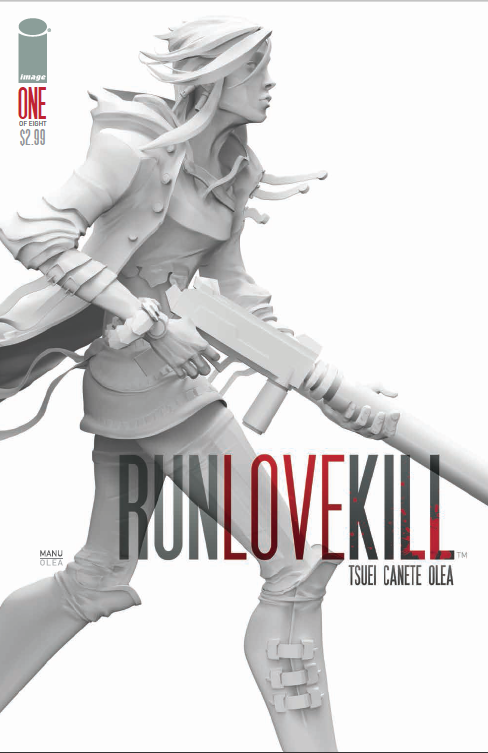 My initial thoughts after reading this book were, “Holy @$%&! This is really good.”

This creator-owned series follows an assassin on the run named Rain Oshiro who is trying to escape a barricaded city called the Prygat.

There is a pronounced cinematic quality that shines in the opening pages with interchanging scenes of song and sorrow.

Jon Tsuei and Eric Canete produce a pace that engages the reader and never lets up. In a way, this story is the perfect teaser trailer. It gives you a strong idea as to who the characters are and where the story is headed without giving away too much and while producing more questions that I’m dying to know the answer to.

Eric Canete is the co-writer and artist on this endeavor and his illustrations hammer home the sci-fi dystopia aspect of the story. You could just feel it and it reminded me of the futuristic world in the film Freejack. The page layouts augment the pace of the story which goes by pretty quickly, but left me feeling satisfied and wanting more at the same time. The pencil work is a little inconsistent at times, but it didn’t take me out of the story for a second.

If I were to change one thing, it would be the book’s cover. It’s stiff and doesn’t incite any emotion from a potential buyer. My reason for picking it up is because the title reminded me of one of my favorite movies Live, Die, Repeat: Edge of Tomorrow.

While the premise is something we’ve read before, Jon Tsuei and Eric Canete make it easy appreciate the world and the mystery surrounding Rain as it appears to be something that is going to get bigger and bigger as things move forward with this eight issue series.