When creators join together, the outcome can fall on a spectrum ranging from tragic to completely mediocre to phenomenal.

Sometimes harmony can exist between multiple opinions.  Sometimes individual voices clash and battle and lead to a ravaged final product.

Sometimes each creator may work alone in his or her own world and simply contribute something completely individual and disjointed to a work that craves cohesion.

Highly promising in concept, Bad Karma Volume One could have led to disastrous results.

It combines the talent of comic book heavy weights Alex Grecian, Jeremy Haun, B. Clay Moore, and Seth Beck into one inaugural volume to celebrate the unity of the creators’ collective of the same name.

Thankfully, despite all odds, this first volume of Bad Karma succeeds in the daunting task of compiling and unifying individual issues from 5 creator owned series, two short prose stories, one experimental poetry and comic hybrid, and 25 artwork pin ups from a variety of artists by committing to a tone and mood of regret, sorrow, and desperation with a recurring cross generation, cross time, and cross incarnation motif of a crestfallen character with a hunger for redemption or closure in impossible circumstances.

Opening ominously with The Artist, this first comic step into Bad Karma prepares us for the tragedy ridden stories to come in addition to the open creativity with structure, art, dialog, and text that the creators managed to express throughout this volume.

The Artist mixes the poetry of Romantic poet Alfred, Lord Tennyson with the modern created comic in order to establish the historical myth of the Kraken and then reimagine it in the context of more modern times. And in order to emphasize the idea of myth propagation across time, a pin up of a man in what appears to be ancient Japan painting a Kraken-like character immediately follows the closing of The Artist.

With this opening, Bad Karma establishes its own series and collective’s name, for across generations, across incarnations, those who accumulate bad karma (which is most likely all of us, but that is not necessarily a judgment we ourselves can make…) face recurring horrors, be it a monster like the Kraken, malevolence from a force far more powerful than ourselves, or a complete fall from grace.

Following the lead of The Artist, The Ninth Life of Solomon Gunn runs with the idea of the Kraken returning to each life in a reincarnation cycle.

Here, all four creators of the Bad Karma collective focus in on Solomon Gunn, his multiple incarnations, and his seemingly guaranteed encounter with the Kraken in each of his lives. Solomon has been a samurai, a cowboy, and a seaman in his past lives, and in all of them, the Kraken seems to reappear.

Why does the Kraken perpetually follow him? Perhaps his destiny defines him as the final slayer of the Kraken? Or, perhaps it’s all due to bad karma carrying over from one of his earliest lives?

We do not really know, but that mystery between whether a recurring horror indicates that a person is destined to triumph eventually or that a person is paying for an early sin or violation allows three other series in the collection, Hellbent, Old Dog, and Middleton, to be read and interpreted from both perspectives.

In addition to both implicitly and explicitly expanding on the role of karma or karma-like forces on individual characters, the karma forces of chaos and order also receive their own identities and plots in Agent Chaos.

Rather than only seeing the end effects of chaos and order, the Agent Chaos series gives the forces faces, names, voices, and codes of operation, further solidifying the role of karma’s forces in the worlds of each of the series in addition to our very own.

With the inclusion of the Agent Chaos stories, we understand that some underlying forces of nature (be it karma or any equilibrium restoring force) balance opposing forces; consequently, the presence of karma and chaos and order demands us to question and imagine what individual actions lead to the misfortune and the triumphs of the characters in the collection while questioning the same in our own lives.

With a unified front on how to include the concept of karma into all of the stories, Bad Karma flourishes with amazing concepts and stories in addition to some sensational artwork from the industry’s most talented (including a piece from one of my favorites, Ben Templesmith). 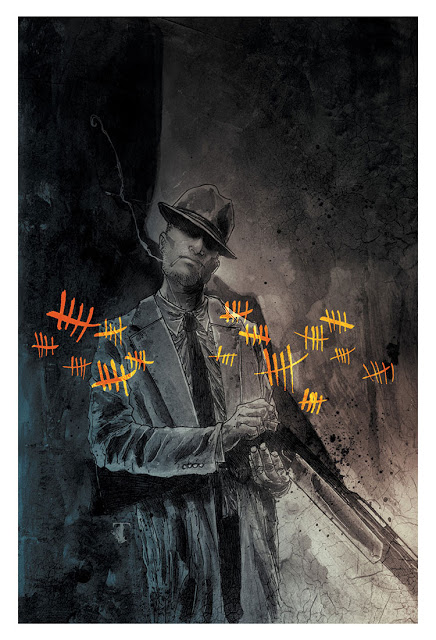 Beyond the artwork and the comic panels, the short stories also shine in this first volume and experiment with seamlessly combining prose with concepts and plots structured in comics to create a richer reading experience.

Whereas comics can create specific stories and worlds with a duet of text and graphics, prose text alone encourages imagined settings and characters, so by strategically combining the two forms, the creators of Bad Karma reap the benefits of both, allowing each form to compensate for the weakness of the other while also forcing each other to optimize their own strengths, thus conveying the pinnacle of any collaboration between forms, techniques, or creators.

Like the success of the hybridization of storytelling forms in the volume, the creators of Bad Karma achieve a harmony between drawing and writing styles and voices to create a rich collage of stories and characters all living under the forces of karma. Bad Karma certainly has some weaker stories in it, but even the weaker ones have a defined part in the ebb and flow of developing the concept of karma this first volume.

Let’s see what karma has in store for Bad Karma’s collection of characters. They will undoubtedly encounter terror and sorrow, but perhaps they will find triumph, honor, and redemption….only if karma allows them to.