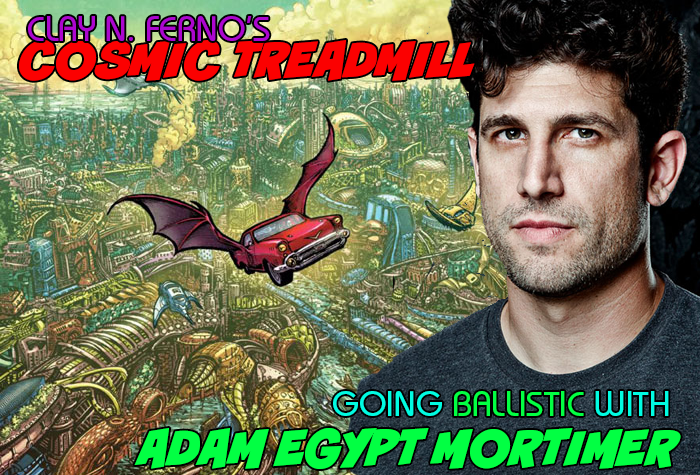 Adam Egypt Mortimer is a filmmaker, author and co-creator of Black Mack Studio’s Ballistic with Transmetropolitan’s Darick Robertson. Black Mask just reloaded a clip in the form of a beautiful looking trade with the first arc featuring repairman Butch and his sentient Gun.

Adam hops aboard the Cosmic Treadmill today to talk about garbage island that is our dystopian Repo City State and how it might feel to have an addictive personality lodged into your gun as you battle the cities fiercest gangsters.

FOG!: Thanks for Joining us today, Adam! Black Mask Studios just released the trade for Ballistic by you and The legendary Darick Robertson (The Boys, Transmetropolitan, Happy). How did you guys meet?

Adam Egypt Mortimer: I met him at San Diego Comic-Con! We were both drinking late at night at the Hyatt bar — this was years ago when they still had an outdoor patio, before the eventual death crush of overcrowding forced them to shut down that whole scene. Darick and I wound up chatting, he introduced himself — this was back when he and I both still lived in New York. He was in Williamsburg at the time and I made fun of him for it.

Somehow that brought us together and we started hanging out a lot in New York, hanging in bars together, talking life, the universe, and comics. Many years later — at another Comic-Con — I pitched him the idea of Ballistic and he fell in love with the bat-winged cars. 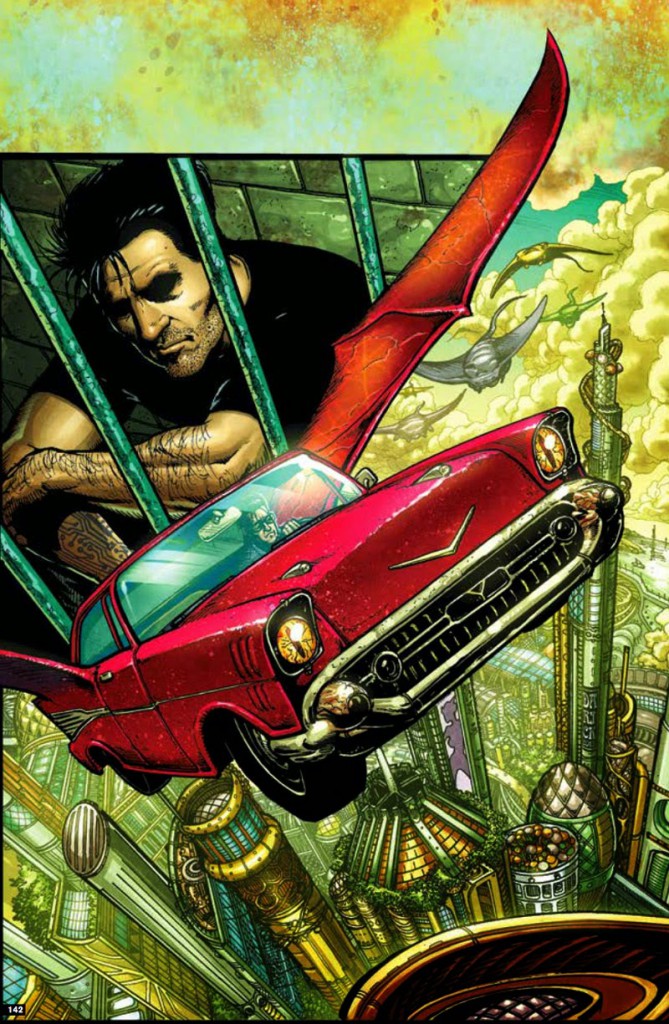 Ballistic takes place in a future city run by corrupt gangsters. Our heroes are a talking gun and Butch the repair man. How do you describe what these guys are up against in Repo City State?

The main thing they are up against is their own whacked-out psychological map of self-destruction. I mean, who the hell follows through with a drug-inspired bank-heist plan on a brightly sunlit hellish hangover morning?

They’re also up against the radical and rapid unraveling of the entire city via a disease that seems to be creating a psychotic breakdown among all the technology. As the story goes on, we learn more and more about the forces at work behind this unraveling.

At its heart, it’s a story about the tendency all living things have towards chaos, criminality, and radically irrational behavior. It’s what they are up against; it’s what we’re all up against. 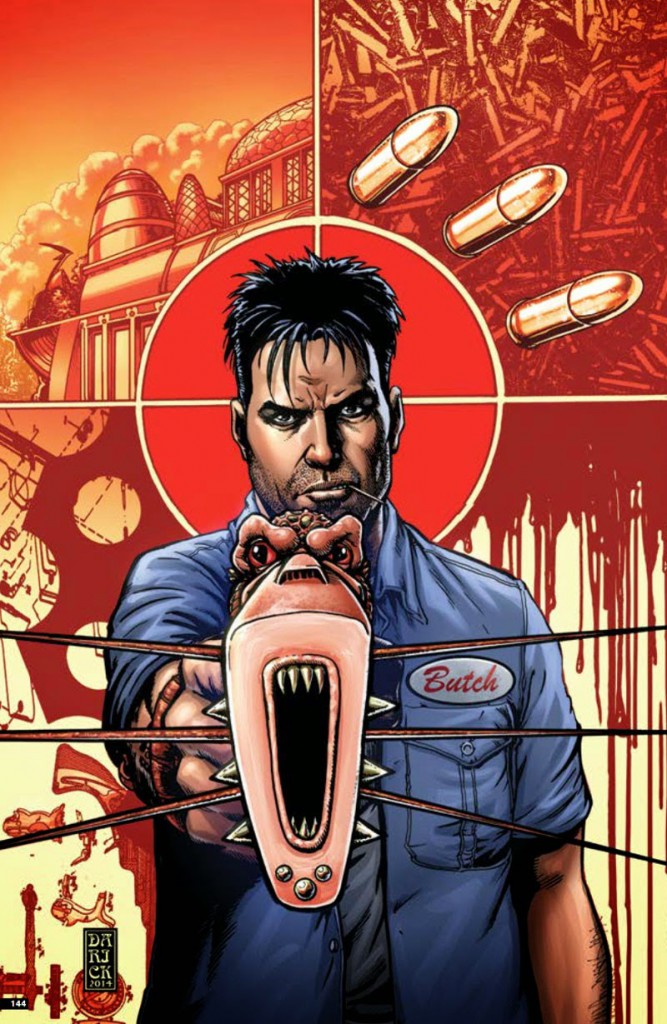 Besides coming up with the look for Repo City State, how else was Darick involved with the story for Ballistic?

Darick and I collaborated on this for years, knocking the idea back and forth. The story is our BrundleFly like-DNA fusion. I described a Southeast Asian island after a eco-pocalypse; he suggested it be based on the foundation of the “floating trash island” in the Pacific. I would describe a character, he would draw a wild new take on it, I would revise the character’s story based on what I’d seen.

His layouts and storytelling decisions would often shift away from the original script into much better versions. The way he portrays the characters from page to page often reflects his understanding of how we are feeling about the character during that part of the story — that’s one of my favorite things about what he did – there’s a kind of an emotionally interpretative approach to rendering the looks of each character. 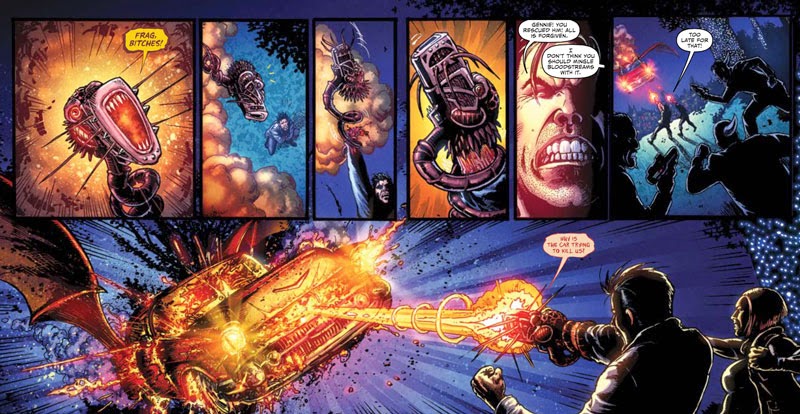 This was one of the first books that I can remember at Black Mask. Were they the most obvious choice when it came to pitching the book?

They weren’t obvious until we’d spoken to them a lot.

We were actually on our way to doing to book at Image, but as Black Mask explained their creative and business plan for the company, it seemed like an awesome opportunity to launch the book as a flagship project with a lot of support.

Which gangster are you most afraid of in Repo City State?

I’m afraid of Koleman Feng. She is just horrifically ruthless, as we see through some of the revelations about her past. Also, the, uh THING that Ballistic faces at the very end — that’s a real piece of body horror. Darick made that particularly gross.

Butch and his Gun get high, together even. How fun was it to come up with new super drugs. I felt nearly hungover every time I watched the two of them go at it.

The first thing I want to think about when I think about a made up world
is the weird day to day life of the characters. The opportunities for
social interactions and awkward mistakes that would be unique to the
world. 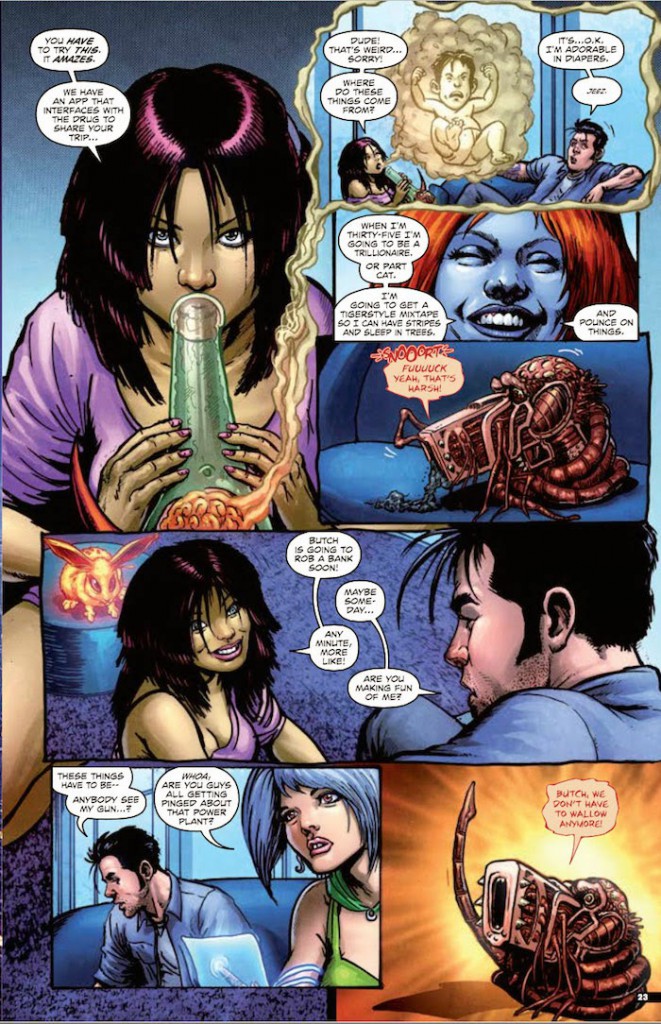 The beginning part of Ballistic in particular is all about looking into things like, what do people surrounded by this kind of technology do to get high? How do they date? How does it affect sexuality?

Like, I’d love to see Star Wars get into it — don’t you think the Jedi have gone on some crazy spirit journeys where they smoke some kind of Ewok forest concoction?

Wouldn’t you want to know all about what substance Jabba is smoking — I’m guessing he sends children to harvest saliva from the Sarlacc pit, losing dozens of lives every year to get this insanely potent hallucinogen that would make most people trip for three years. But there’s Jabba, puffing away. I love to get into the underbelly of the world.

To answer your question directly — it was super fun. I’m glad to hear you got a contact high from looking at it.

When did you get the idea first for Gun aka Bang Bang, the talking gun/partner?

A friend of mine, the visionary artist Paul Laffoley, once theorized that if tools were alive, they would help us be more ethical. If you tried to kill someone with a hammer, it would refuse.

I thought that based on how all other living things behave, the opposite was true. A living hammer would have just as much potential to fly into a murderous rage as anyone else. This was the spark of an idea for a guy whose gun was both alive and deranged. 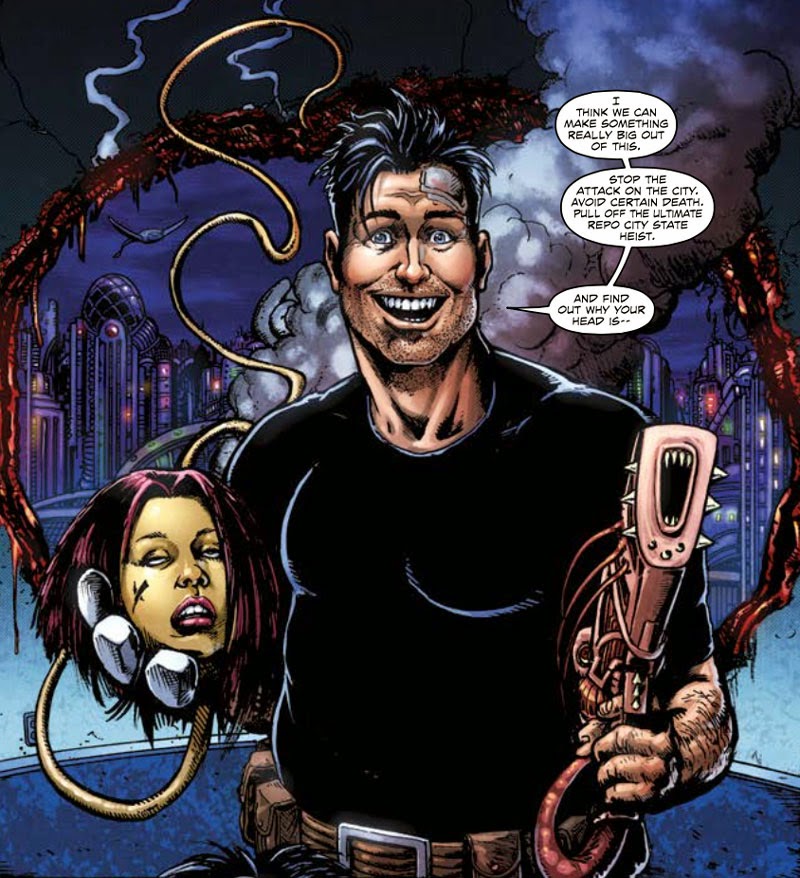 Tell us about the trade edition of Volume 1 (and why people should order it or get it at the next Con)?

The comic was written with such incredible density that it’s only once you take all the pages and run them continuously that it fully hits you. We took out all the chapter breaks and covers from in between the pages, and we had designed everything so that the panels would flow perfectly. I love seeing it this way.

Sonia Harris was our graphic designer for the book — she created an AMAZING cover and overall design; the cover has this elegant technological sparseness that reminds me of blueprints. The simple monochromatic feeling contrasts with the dense colorful insanity of the interior pages in a way that packs a major aesthetic punch.

The whole thing it just a wonderful object. Having all the annotations together in a clean, organizes run at the back of the book will be very helpful to the readers who like to get into the backstories and science behind the world. I’ve found that people really got into the annotations and so we made sure to have them updated and very well designed.

There’s also pages of Darick’s original sketches and ideas when he was working out the character designs — including some wildly different prototypes of Gun and a full page teaser comic we made just to pitch the story.

Was it fun putting together the annotations?

When I was a young kid first discovering science fiction, I loved any book that started with a map — Middle Earth, Dune. I had an “Encyclopedia of Dune” that I read much more intensely even than the novels themselves; I had a book that collected all the maps of all the stories you could imagine. 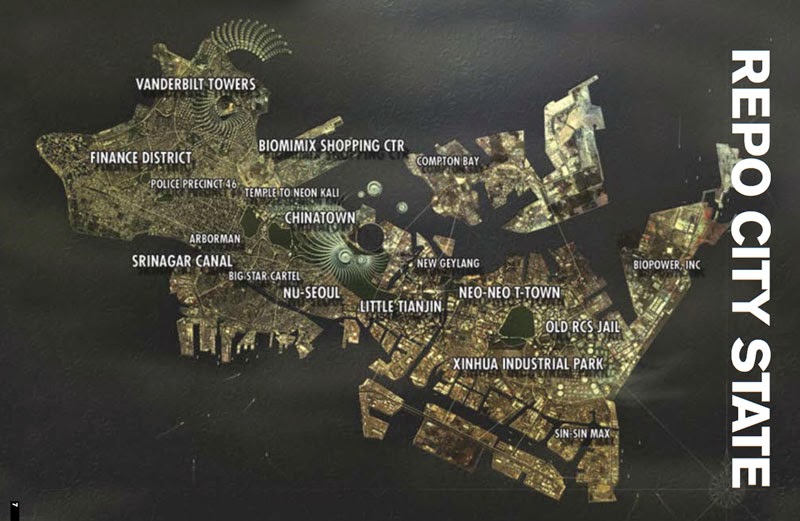 Later on, I became obsessed with James Joyce’s Ulysses and I have this thousand page tomb of annotations with maps and times of day and addresses of all the shops. I always felt that Ulysses was more than a book, it was a living entity with infinite points of exploration.

I wanted to help excite readers of Ballistic in the same way. I’d love to see fan fiction or other kinds of exploration in this world, I’ve provided tons of material to anyone who wants to play!

I asked Darick this same question — “What household item or tool do you have that you would like to see come alive and be your perfect partner?” He told me he just wants a Maker Gun.

I’m a filmmaker, so I’d love to have a highly adaptable set of living eyeballs who could remotely record vision and work with me to find the best way to create a scene.

I mean, I love the cinematographers I work with but if I could partner up with a combo directory of photography / living camera — maybe a single giant eyeball with wings, and a biological lensing variation. I think we could do some damage together.

Any new projects? Where can we follow you online?

My movie Some Kind of Hate just had its world premier at the super cool Stanley Film Festival on May 2nd. It’s my first feature and I’m so psyched about it. It’s an emotional intense, character driven take on the supernatural slasher genre.

I’ll be doing a comic story in the Broken Frontier anthology, which is an amazing collection of cool creators. The Kickstarter just launched and it’s already achieved 20% of its goal — get involved!

Next up, I’m working on my next film and I’m brewing an insanely big idea with Black Mask. I’ll keep you posted on all of that! 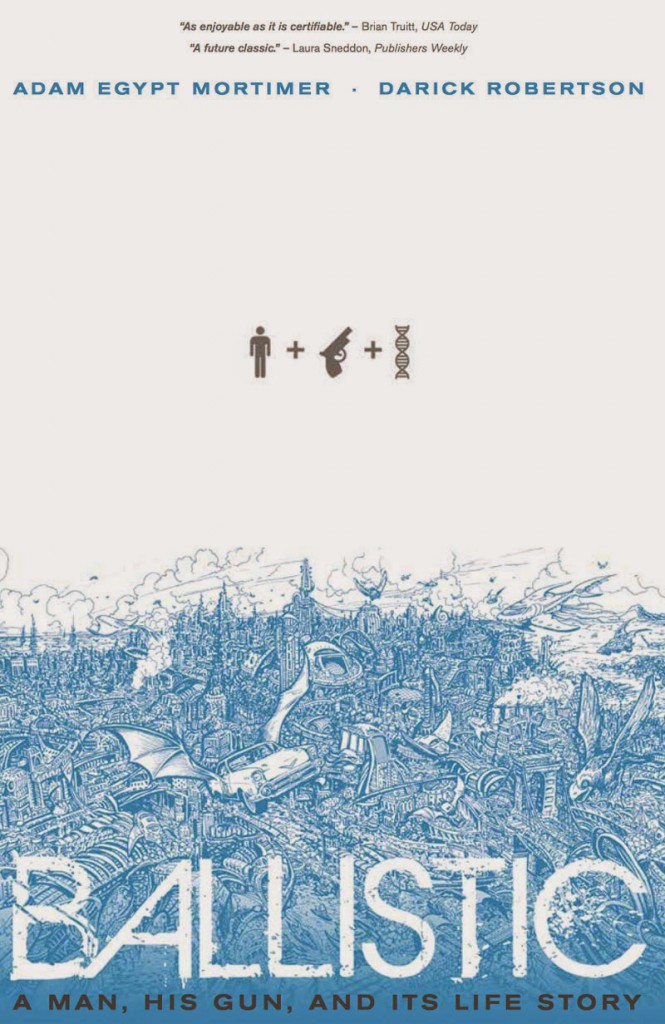