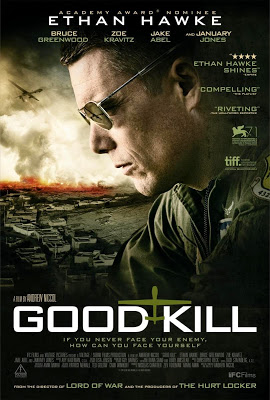 I didn’t think there was such thing as bomb-fatigue.

Good Kill is two hours of drone strikes that increasingly make the CIA look like merciless ass holes as the film progresses. Contrived and void of depth, I was thoroughly disappointed in this film as it had such potential to get personal and it never does.

Andrew Niccol, writer of The Truman Show and Gattaca brings several of his trademark themes into Good Kill – the complications of always being monitored and essentially controlled and issues of being dominated by superior forces with little regard for ethics.

The Truman Show similarly had thought-provoking themes and great performances.

Good Kill is repetitive, uninviting, and numbing. Character development is minimal if not absent. And the acting is very underwhelming.

Good Kill is a series of monologues about the tragedy of drone murder delivered repeatedly by Col. Jack Johns (Bruce Greenwood). While the issues discussed are intense, Niccol really does a poor job executing the importance of the fragile subject matter with the repetitive speeches.

The director’s script is simplistic and boring (let’s remember that he also wrote In Time – the man has serious hits and misses with his productions). It’s so cliché that it becomes insulting to the genre of war stories, especially in the wake of American Sniper.

In Sniper, Bradley Cooper’s performance is dynamic and poignant. In Good Kill, Ethan Hawke’s is lazy and flat.

His character, Thomas Egan, has no back-story – he just wants to fly again – so it’s difficult to build any sympathy for him. A shame because I believe Hawke is talented. I just prefer him as the philosophical rambling charmer in Richard Linklater’s films. In this movie he relies on his sulky squint, slight quivering chin, and deep raspy voice. The tone doesn’t add to his character’s emotional instability, it’s a useless prop that adds nothing.

January Jones, as Thomas’ wife, Molly, is, as ever, beautiful and bland (yes, I feel the same way about her in Mad Men). Her purpose is to deliver cliché one-liners about her husband being mentally far away, looking with exaggerated sorrow at her husband’s vodka bottles, and finally, wearing tiny, tight, bright dresses just to gain attention from her husband.

Thomas is a silent jerk. We are led to believe that he was once fun during a single sentence midway through the film, but it’s unconvincing. He drinks, he grills, he stares into space. I understand the character’s struggle with his position, but Hawke’s portrayal of that hurt is just unparallel to the performances of Renner and Cooper.

Zoë Kravitz, as Airman Vera Suaraz, has potential to be a good actress, but here she is the stereotypical female rookie – talented and sharp at first, then devolves into a tear-filled character dramatically opposed to everything she has trained for. Additionally, she exhibits a very misplaced and sudden display of hyper-sexuality. Definitely didn’t fit into the film.

There isn’t much else to say about Good Kill for which I feel a little guilty about considering Niccol presents an intriguing topic. I just don’t think he did an effective job, and as I’ve mentioned, there have been far better films that deal with the complications of modern war which are visceral and poignant experiences.