Do you dig the flicks, daddy-o? This summer you can get your kicks with the cool cats on the Satellite of Love, in orbit with some of the cheesiest movies ever made. Don’t be a square, it’ll be a gas! On July 28th, 2015, Shout! Factory will release Mystery Science Theater 3000: Volume XXXIII, featuring four episodes never before on DVD: Daddy-O, Earth vs. the Spider, Teen-Age Crime Wave and Agent For H.A.R.M.

The set also includes a bevy of brand-new bonus features including the featurettes Beatnick Blues: Investigating ‘Daddy-O’, This Movie Has Legs: Looking Back at ‘Earth Vs. The Spider’ and Film It Again, Sam: The Katzman Chronicles; interviews Tommy Cook: From Jungle Boy To Teenage Jungle and Peter Mark Richman: In H.A.R.M.’s Way, MST hour wraps, theatrical trailers and four exclusive Mini Posters by artist Steve Vance.

Fans who pre-order their collection through ShoutFactory.com will receive exclusive MST3k coasters with their order.

Mystery Science Theater 3000: Volume XXXIII brings us Daddy-O, the story
of a truck-driving singer searching for the killer of his best friend
among the denizens of a seedy L.A. club, and accompanied by the short
Alphabet Antics; Earth vs. the Spider, a tale of a ticked-off tarantula
and the town it calls dinner-plus the short Speech—Using Your Voice;
Teen-Age Crime Wave, wherein a trio of juvenile delinquents promises
all sorts of 1950s danger to a nice family; and Agent for H.A.R.M., Cold
War “sci-spy-fi” thriller, featuring H.A.R.M agent Adam Chance as he
works to protect a recently defected Soviet scientist from Russian
agents who want his formula for preventing alien spores from turning
flesh into fungus. 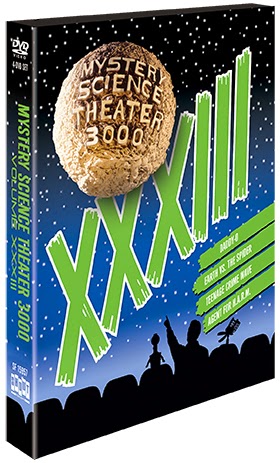