Here’s the bottom line: if you’re not playing some of the boardgames that are part of the current table top gaming renaissance, then you should be. Whether you’ve liked the traditional boardgames of yesteryear or not, the games I’m suggesting to you here are in a completely different category. A lot of people who never cared for Parcheesi or Monopoly are avid and enthusiastic members of the new and geeky tabletop subcultures that have been growing throughout America and Western Europe.

Here are some games that are super fun and that you should be playing right now. Because these games can vary so much in the way they play and the kind of fun they provide, I am going to break up this list into three posts, each describing a different kind of game and providing some descriptions of some examples.

The first kind of game is, in my mind, the most fun, and it is called the cooperative game.

These games work differently from other games in that the players aren’t competing against each other. The players cooperate during game play against some element of the game itself, and their ability to work together as a group usually dictates whether or not they will, all together, win or lose.

Here are some examples of excellent cooperative games: 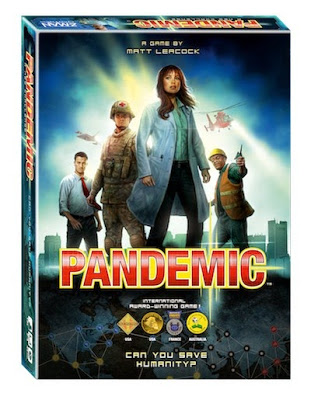 In Pandemic, the players each take the part of a character who is trying to stop the outbreak and spread of four diseases. The board is a map of the world, and little colored cubes represent different types of diseases that spread to different areas through a card-drawing game mechanic. 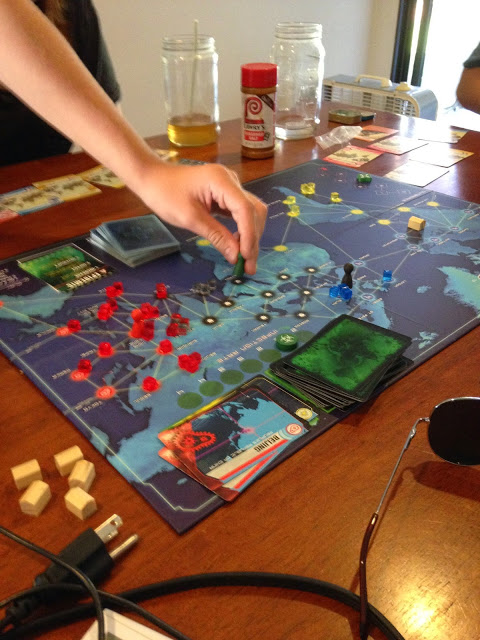 During play, players must draw from a deck of cards to see where these diseases break out and spread, and each player takes a turn trying to contain the diseases until cures can be found. If the players cure all of the diseases before a global pandemic occurs, then they all win the game together. If the players run out of time, allow a disease to spread too widely, or allow too many outbreaks to occur, then they lose.

This is an excellent game. The characters are dealt randomly at the beginning of the game, and each has a special power that either helps to contain the disease or to find a cure. 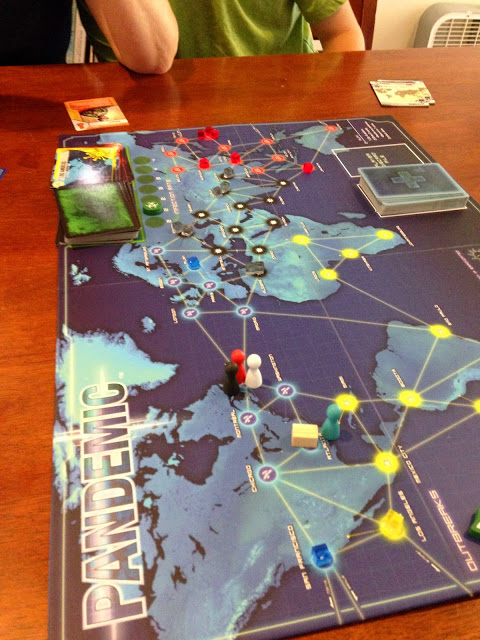 Also, the location and intensity of the diseases at the beginning of the game is random, so each time you play the challenges will be very different. This means that the game can be replayed again and again, and it always requires the players to find new ways to navigate the map and use the abilities of their characters. 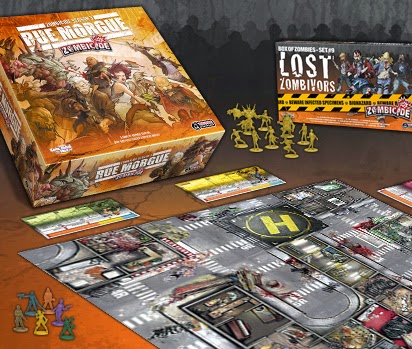 Like Pandemic, this game relies on a deck of cards to randomly distribute threats (here they are zombies) around the game board, which represents a couple of city blocks.

In each scenario (the game comes with ten different scenarios, each of which provides different victory conditions and objectives during play), the players play the roles of zombie survivors who are trying to escape an urban zombie apocalypse. 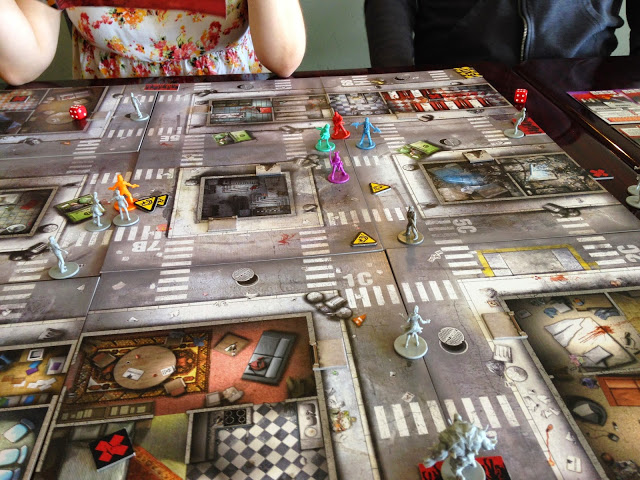 For example, in one scenario at least one survivor must make it to an “exit” area of the board with water, rice, and canned food (represented by cards that the characters can accumulate during play). 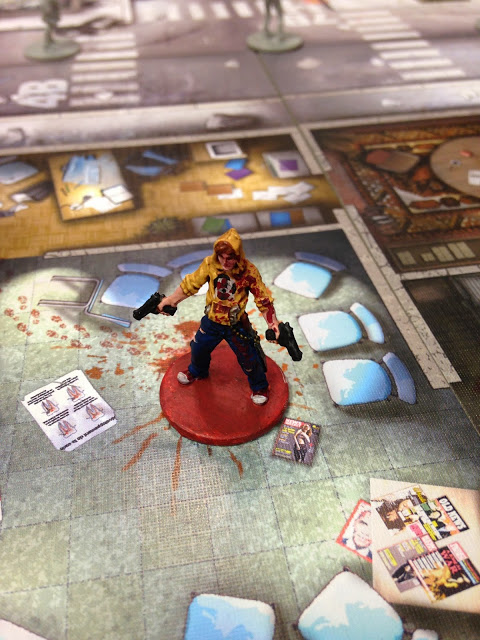 All of the survivors and zombies are represented by miniature figurines, and the poses, sculpting, and casting of these are of a very high quality. The modular game board and components also have a very high production value, and while the rules can sometimes be confusing about some points, it doesn’t take long to learn how to play the game. 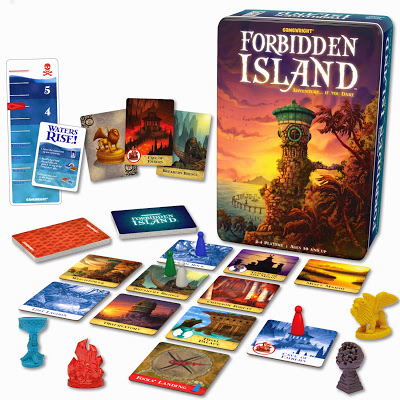 In this game, the players take the roles of explorers who are trying to find four artifacts on a small island before it sinks into the ocean.

The players win if they get all four artifacts and leave the island before it sinks. 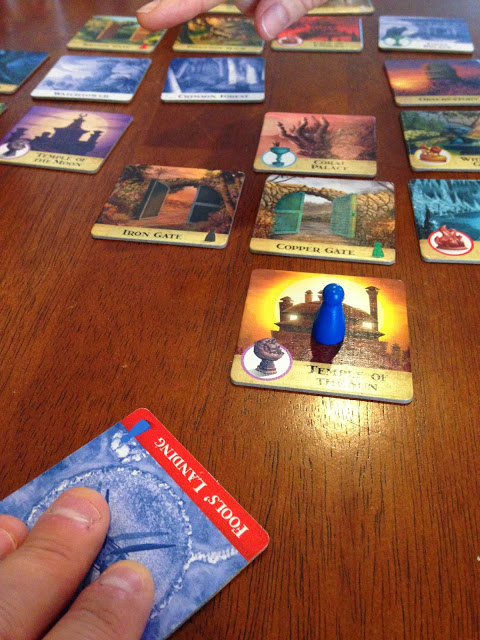 The rules, layout, and play of the game are very simple, but the mechanics of the game work very well with the theme; it really does feel like you are rushing around on an island that is slowly, inevitably, submerging.

This is a fun game, and it is faster and a bit less challenging than the games listed above. 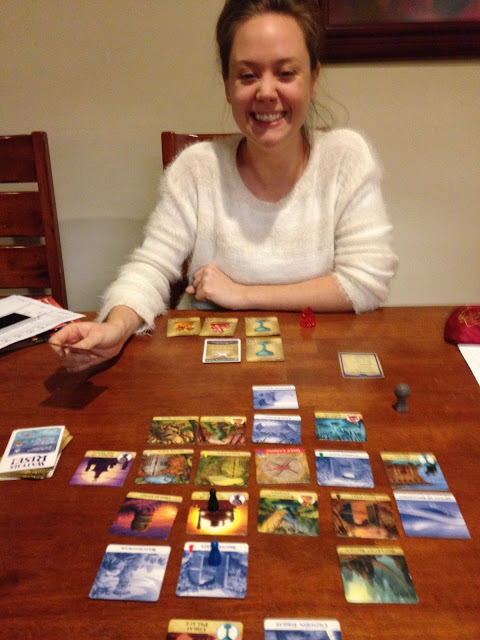 Of the three cooperative games on this list, Forbidden Island is probably the best one for people new to boardgaming and to cooperative play games.