I will use director Alan J. Pakula’s 1979 effort, Starting Over to discuss a genre that I feel that is truly lost: the intelligently made “rom com.”

We all know the term “rom com,” that hideous mess of the last few decades of the Sarah Jessica Parker and Kate Hudson kind that serves its ideas so warmed over that the mere mention of one will send most film watchers who expect anything more than a trifle running for the hills. There was a time though when romance was not always looked at in a giggling beautiful people kind of way; you all remember the time when the Albert Brooks and Woody Allens dominated the landscape, don’t you?

Alan J. Pakula was no where near the aforementioned directors’ world during the 1970s, as he, like so many of his contemporaries, were too busy examining the paranoia of a Nixon-era America in films like Klute, All The President’s Men and The Parallax View.

One wonders why after such huge successes, that Pakula would gravitate towards romance?

Perhaps the reason lies within the critical and commercial failure of his heavy-handed 1978 film, Comes A Horseman, which included the death of stuntman, Jim Sheppard, or perhaps it was the chance to work with the talented young screenwriter, James L. Brooks, the successful creator of The Mary Tyler Moore Show that had Pakula thinking in a new direction. Regardless of the reasoning, there is much to like about Starting Over, Pakula’s last film of that decade. 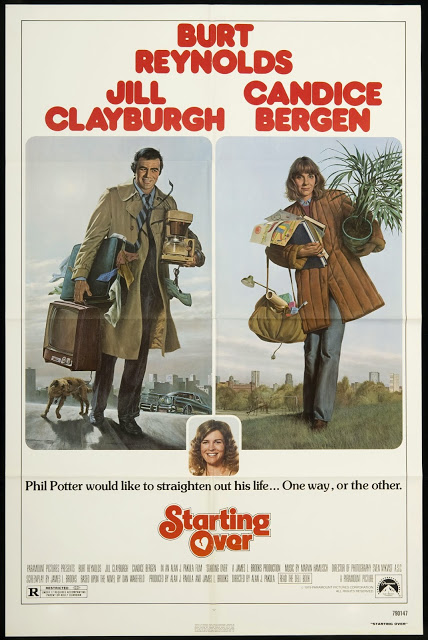 The film opens with Phil Potter (an eerily clean-shaven Burt Reynolds, free of his Smokey and The Bandit ‘stache) staring at his wife Jessica (Candice Bergen) as she performs a comedically flat version of her new song “Better Than Ever,” an almost mockingly nasty poke at late seventies feminism, which she wrote about their fading marriage.

She soon carelessly tells Phil that she has filed and has been granted a divorce. Phil takes it passively and packs his bags for Boston where he can regroup and stay with his brother Mickey (the always solid Charles Durning) and his over-sensitive wife Marva (Frances Sternhagen, who is better known as “Cliff’s mom” on Cheers).

On the request of Marva, Phil is off to a divorce workshop in the basement of Boston’s famed Trinity Church, where he and his fellow sad sacks sit and discuss their failed marriages with a sitcom-esque cadence of moans and accusations as they fight off the hoard of divorced women, who like approaching Visigoths, pound the door every time that their stay in the basement is supposed to start.

Here, we can see the brilliance of James L. Brooks dialog writing in television. Sure, the jokes have laugh space like any good episode of Rhoda (another Brooks creation), but they are no less hysterical and real.

Phil seems happy to go to these meetings and that encourages Marva and Mickey to inflict more kindness on Phil as they secretly invite their preschool teacher friend Marilyn (ironically played by Jill Clayburgh just a year after she defined the modern divorcee in An Unmarried Woman) to a dinner/setup to meet Phil. They hit it off, but because she is equally gun shy after a failed relationship, she pushes our Phil away, even setting him up with another divorcee friend of hers, Marie, who seems more hungry to get at Phil than he had ever dreamed of, sending him running back to Marilyn as he begs her for any kind of evening, romantic or not.

It’s abundantly clear that Phil is not over his ex-wife, but he craves companionship at some level, and Marilyn will begrudgingly comply, though she is still keeping her guard up. You know the wife is not out of the picture, not even close, but Marilyn just likes Phil too much to not see this through. Clayburgh’s ability with comedic dialog is to be commended here, and I truly wished that she had done more comedy, and she plays Marilyn fragile but smart and handles each scene with a demented confidence that feels like she knows what is best for her, but she also knows that the hammer will fall soon. 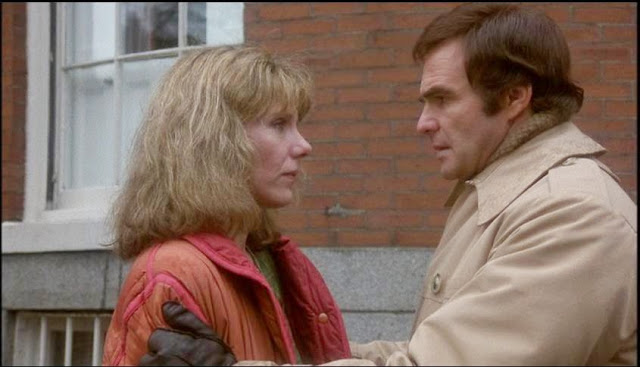 As far as Burt is concerned, well, needless to say that this is 1970s Burt Reynolds, so you are given the same classic cocky performance you always get in every film he stars in, which you of course love, regardless of how it does or doesn’t fit the character he is playing here.

You may be thinking at this point that the story of Starting Over doesn’t exactly fall to far off the “rom coms” of today, and in some ways you are right. A romantic film that plays out with some difficultly but one where you know that the two leads will get together in the end is the book definition of a “rom com,” but using that definition alone, Annie Hall and Modern Romance would also be considered “rom coms,” except that they create interesting, intelligent characters who progress through the narrative with smartly written dialog and situations that reach a level of uncomfortable that recent entries into this genre do not have the courage to do as to not upset their callow audiences.

One would only have to look at the Thanksgiving scene in Starting Over when Phil invites Mickey, Marva, and Marilyn over to his apartment for dinner and callously crushes our Marilyn, who finally is feeling like she’s part of Phil’s life, when his ex-wife Jessica calls up, and Phil describes his new love to Jessica as “some friend of his brother’s.” It’s a genuinely soul crushing moment that seems to come out of nowhere, but it does somehow fits Phil’s hidden resolve to get back with Jessica, though he shouldn’t even consider it.

If there is a negative critique of Starting Over, it is that it does move too quickly towards an ending that doesn’t seem to fit Phil’s character. It almost resembles Albert Brooks’ desperate wedding proposal to Kathryn Harrold in Modern Romance, except that act furthers Brooks’ insipid obsession with the woman that he cannot stop breaking up with during the film. Phil Potter’s proposal to Marilyn in the end shows the weakness in James L. Brooks writing at the time as it seems more like something that would happen at the end of a 30 minute sitcom and not a film that is taking a hard look at the modern divorced man. James L. Brooks would tighten in endings during the 1980s with Terms Of Endearment and Broadcast News. Two excellent films that occasionally slip a bit too far into melodrama, but still come out with their edge intact. 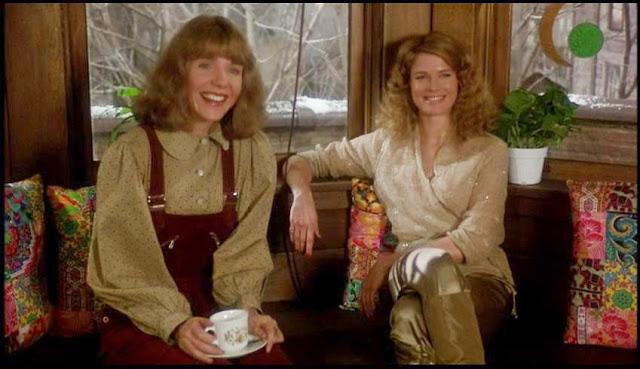 Though Starting Over is not in the same league as some of the more honest films about men and women in the late 1970s, it is still packed with more than enough humor and excellent performances to lay waste against anything in the desolate land of the modern “rom com.”