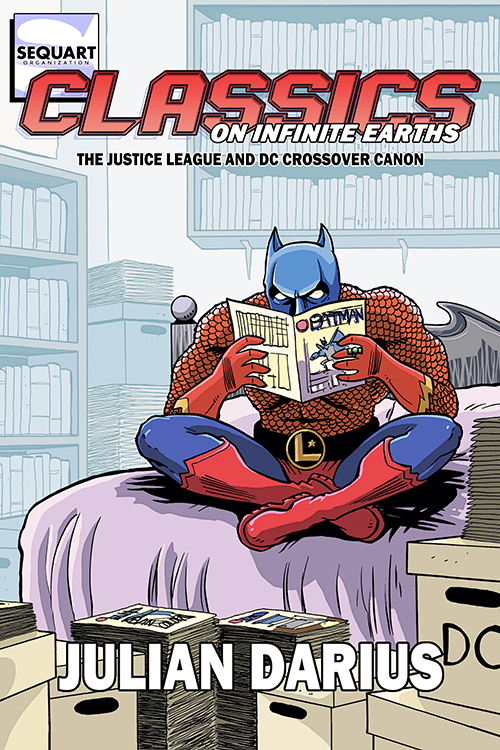 Sequart Organization is proud to announce the publication of Classics on Infinite Earths: The Justice League and DC Crossover Canon, by Sequart founder Dr. Julian Darius.

In this series (of which this is the first book; subsequent volumes will focus on Batman, Superman, and other important DC characters), Darius argues that the DC Universe is old enough to have produced a canon of classic stories. Here, in this opening volume, he analyzes this canon as it pertains to the Justice League and DC’s universe-wide crossovers.

Since 1940, DC Comics has been bringing its heroes together, first as the Justice Society, then (beginning in 1960) as the Justice League, and finally (beginning in 1985) in universe-wide crossovers. Shared super-hero universes have achieved widespread attention in the wake of Marvel’s movies, but DC has been paving the way since 1940.

A decade in the making, Classics on Infinite Earths takes readers on a tour of this history, using discussion of classic stories as a unique way of illuminating the history and evolution of the DC Universe. In the process, Darius offers what may be the very first long-term study of how such a shared universe is managed.

Classics on Infinite Earths runs 428 pages, making it Sequart’s biggest book to date. It is available in print and for Kindle.

About the Publisher
Sequart Organization is devoted to the study of popular culture and the promotion of comic books as a legitimate art form. Sequart has released twenty-three books, six documentaries, and thousands of online articles. Its documentaries include She Makes Comics, and its books include Our Sentence is Up: Seeing Grant Morrison’s The Invisibles. Sequart is currently producing a documentary on writing powerhouse Neil Gaiman.