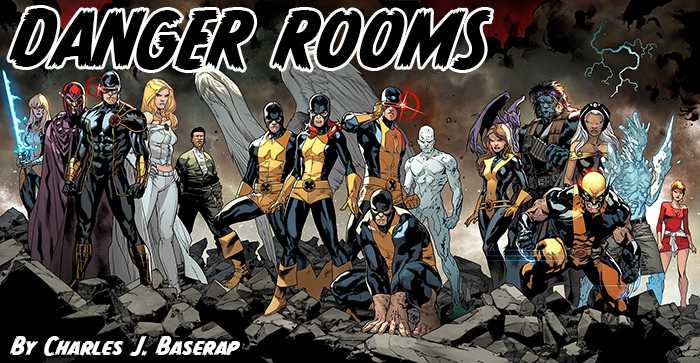 When you think of mutants, it’s natural to think of the X-Men and their vast stable of arch-enemies, or, at the very least, Chris Hemsworth, because, really, no man can possibly be that good looking and charming without some sort of help that defies nature.

But one of the most overlooked mutants in all of Marvel Comics also happens to be one of the most powerful, and that’s the young Franklin Richards, son of the Fantastic Four’s Mister Fantastic (because Mr. Humble didn’t play well to the crowd) and Invisible Woman.

Yep, that’s right. Franklin Benjamin Richards is a mutant and while it’s easy to pick on him for still pronouncing “uncle” as “unca” like some sort of moron, I’d very much advise against it because he can totally wish you into the cornfield if he chooses.

Franklin was first introduced in Fantastic Four Annual #6 way the hell back in 1968, so, naturally, he’s still only 8 or so and talks like he’s 5. How that works, I’ll never know, especially considering his younger sister, Valeria, came in—in her current form—around 2003 and has already been aged up to around 4 and is a mega genius. Poor Franklin didn’t even get a name in the comics for almost the first two years of his existence and his sister became smarter than he’ll ever be in practically no time at all, which is even odder when you realize that in Chris Claremont’s seminal Days of Future Past—set in the not so far flung past of 2013—Franklin is a fully grown leader of the mutant resistance and banging Rachel Summers.

Due to the cosmic rays that gave the Fantastic Four their powers, it was really no surprise that the offspring of two of the members would have some abilities of his own, but I don’t think anyone was expecting them to be so prolific.

As in, potentially end all that we know and love dangerous.

Franklin’s powers manifested well earlier than the more common pubescent ages of most mutants and when they did they were so off the charts shit your pants and kiss your loved ones goodbye scary that his own father did everything he could to shut them down.

Because his power set is basically anything. Yeah. The kid who can’t say “uncle” correctly after five decades has pretty much godlike reality warping abilities, though over the years various writers have created contrived storylines where those powers are curbed or removed, probably just to avoid people writing in and asking why Reed couldn’t just have Franklin blink away their enemies or solve world peace or make the Kardashians go away or whatever.

Never mind his potential futures as some nigh omnipotent monster, among some of his most prominent displays of power took place during the Onslaught incident and the birth of his sister.

During Onslaught, the X-Men’s Professor Xavier went off the rails and manifested a separate identity comprised of the worst of his and Magneto’s psyches and nearly ended reality. In the end, members of the Avengers, Fantastic Four, and a few others seemingly sacrificed themselves to stop him. The behind the scenes story is that Marvel had farmed out some of their properties to the folks at Image to reinvent them, resulting in Heroes Reborn, thirteen months of our heroes living on an alternate Earth along with Captain America’s man boobs. No. Really. You read that correctly.

Anyway, for story purposes, it turned out that Franklin had actually created an entire world and that’s where the heroes went. Stop for a second. This kid created an entire goddamn reality for millions of people because he was sad his parents were gone.

But, whatever, it did the trick, and eventually he was instrumental in helping them all get back to our reality in Heroes Reborn: The Return #1-4.

Just a few years later, Franklin proved that he could once again create life and helped bring his little sister into the world. At one point, Susan Richards was pregnant with the girl that would become Valeria but as she was conceived in the Negative Zone, well, that was a problem and Sue lost the baby in tragedy.

But then after the heroes came back and Franklin was reunited with his family, a teenager named Valeria came into the picture from an alternate Earth, purporting to be the daughter of Susan and longtime nemesis Dr. Doom. She had a few adventures with the team and was all but adopted by the FF until an encounter with another godlike being named Abraxas resulted in Franklin again making reality his bitch and erasing the teenage version and making his mother pregnant again which sounds even creepier when I put it that way.

Susan once again went into labor, the same complications arising and threatening to make history repeat, but as Reed was held captive by an offshoot of the Inhumans, the Human Torch enlisted the aid of Doctor Doom himself, who safely delivered the baby under the condition that he get to name her.

That name? Valeria. I was kind of pulling for Doombellina, but whatever.

Franklin’s been one of the most frustrating mutants in comics due to his wildly differing portrayals from paint chip addled moronic toddler to super scary as all hell god being from our nightmares, but make no mistake.