Like a modern day Odd Couple, the Sacramento-based comedians from the Stand Up! Records roster, Keith Lowell Jensen and Johnny Taylor have hit the road on an off kilter Summer jaunt, dubbed The Special Snowflake Tour. The tour, which started in May and runs through July, will be filmed for a documentary and is the duo’s third annual trip together.

What makes this tour coupling so ‘odd’ is that much like a indie band circa the year punk broke, The Special Snowflake Tour is less about playing established comedy clubs than about finding alternative venues that often don’t have comedy on their roster.

I had the opportunity to ask the duo 20 questions.  Check out their responses after the jump.

FOG!: What’d you have for breakfast today?

Keith Lowell Jensen: Coffee. Specifically, a double traditional Americano with a teaspoon of honey and a tiny shake of cinnamon. I want this drink popularized and named after me, The KLJ.

Do you remember the first time you told a joke and got a reaction?

KLJ: Probably in 4th grade. I was expelled from one school and placed in another. Switching schools was intimidating enough, but I was in a “gifted” program with kids who’d been in such programs for 3 years already and who were way ahead of me on the whole being smart thing. For the first time I became a cut up in class. Being able to make them laugh was the one and only time I felt I belonged with these little geniuses. The next year I was again expelled.

JT: I don’t quite remember. I remember joking around constantly when I was a kid and people laughing and thinking I was pretty funny as a kid. But I don’t remember specifically at all. I’ve smoked a lot of pot since then.

How old were you and do you remember the joke?

KLJ: I don’t specifically. I do remember another kid saying his dad would die without coffee. I suggested that might be a good thing, sounded like a dude who needed to be out of the gene pool and then I tagged it, better late than never. That last part killed.

JT: I started trying to perform in front of people pretty early. Usually at the dinner table. I was probably just 5 or 6. Probably had to do with farting.

Do you remember the first joke to an audience?

KLJ: I worked for Spike and Mike’s festival of animation. I would warn the crowd for the midnight “Sick and Twisted” show, “These are not the cute, fuzzy animals loving one another type of cartoons. These are sick syphilitic little beasts raping and murdering each other. If you’re down with that, stay. If not, get your money back now. Once the first ‘toon has played, we will have already spent your money on drugs.” It worked well for that audience. It was a PSA I was required to give and I wanted to make it funny and not a bummer.

JT: Yeah! It was a bit about Affliction T-shirts. It ended up on my first album Tangled Up in Plaid in a much better form, but yeah. That was the first one.

Who was the most influential comedian for you growing up?

KLJ: Steve Martin. I memorized his routines. I wanted a little white suit. He introduced me to the idea of stand up comedy.

JT: Three really stick out. Robin Williams, Bobcat Goldthwait, and Richard Pryor. I probably took the most influence from Pryor. I always loved how he told a story.

Did you ever have the opportunity to meet them and was the experience what you had hoped it would be?

KLJ: Sadly, no. I’ve never met Steve Martin. I have met and worked with Roseanne Barr, another huge influence on me. She was awesome, supportive, funny, cool. She grabbed my hand as I walked by her table and told me I was hilarious. I went into the green room and cried. Then I calmed my hysteria and we got to hang out. I very much forward to working with her again.

JT: I actually got to perform with Robin Williams and Bobcat a few times at the Throckmorton Theater in Mill Valley, CA. Robin was about the most down-to-earth comic…actually person, I’ve ever met. Bobcat was a little more to himself but still very gracious. Would have loved to meet Pryor. I would have been quite starstruck.

Best thing about being on tour?

KLJ: Eating, drinking coffee, getting up in front of a crowd who think I’m hot shit because they’ve never run into me at the grocery store stocking up on toilet paper and athlete’s foot cream. And listening to music with my comedy brother during long drives. I would not tour with someone who had shitty taste in music.

JT: Performing in  cool cities and meeting cool people and comics from those cities. We’re hitting so many great places on this tour and thus far the response has been really incredible.

Do you think that it’s harder for comedians to experiment or even fail with social media constantly responding with barometers of what they deem is appropriate or funny?

KLJ: No. And I’m tired of comics whining about it. It’s great. If you believe in what you said, and “they” take offense, either look at the offense and see if they’re right, in which case you grow, or be even funnier responding to it. They’ll probably hate you more, and your audience will love you more. Maybe you won’t get a sitcom on corporate sponsored television. So what.

JT: I guess it depends. I think it’s just like stand-up. Say what you want and deal with the consequences.

Favorite comedy album of all time?

KJL: Oh damn. That’s like asking me my favorite shit I’ve ever taken. I’ve had so many, and I love them all. Bob Newhart’s Button Down Mind is in the running. Emo Phillips Live at Hasty Pudding Theatre. Lily Tomlin’s Modern Scream, Stanhope’s No Refunds. I can’t do this.

JT: Really tough question. Chris Rock’s Bring the Pain was the special that made me want to do stand-up. I love Chewed Up by Louis CK. Everything Stuart Lee has ever put out is gold.

Is anything not funny?

KLJ: There is no subject that you can’t find some funny in, I guess.

JT: Anything can be funny. But it’s the dreadful misses on sensitive subject matter that we remember.

Worst thing about being on tour?

KLJ: We sleep in some pretty awful places. We stayed with a comedians whose house smelled like cat pee even though they didn’t own a cat. There was a half a taquito on one couch, where Johnny slept, and my couch was about half as long as my body. It was gruesome, and we were glad to have it.

JT: Sleeping on couches (or floors) in degenerate comedian’s gross apartments. We got hooked up with this awesome two-bedroom loft in Portland and Keith and I felt like the fucking Rockerfellers. We spent a grand total of 4 hours in it.

What comedian living or dead would you want to open for if you could?

KLJ: He wasn’t a stand up, but I would have loved to have shared a green room with Harpo Marx. He is one of the few genius comedians with a happy biography and I love him.

What’s the funniest word in the English language?

KLJ: Innuendo so perfectly sounds like what it describes. I want to give the person who created that word a cigar (which is sometimes just a cigar).

KLJ: Alive now? At this moment I’m gonna say Maria Bamford, Katt Williams, and Doug Stanhope. I can recite their material, with almost no delivery and it’ll still makes people laugh, and then go “Woah!”  And I can honestly say that Johnny is one of my favorites. That’s why I like working with him. On the nights when I headline, he really challenges me having to follow him. Ask me in a few hours, my answer might change.

If you weren’t a comedian, what would you be doing?

KLJ: Writing and drawing Indie comics. It’s my true love. I do comedy instead because it comes easier to me and pays better. I’m lazy and a sell out.

JT: The President of the United States of America.

What’s the funniest tv show of all time?

KLJ: All In The Family. The Simpsons is great, too.

JT: America’s Funniest Home Videos. Nothing is funnier than people falling down except for people getting kicked in the nuts. With AFV you get both.

What comedian have you never understood the appeal of?

KLJ: I’ll just say, there are comics who I agree with, but I don’t find them funny. I listen and nod and say, yes, good point, I agree, while everyone around me laughs their ass off.

JT: Tough to pinpoint a specific person. I know what I don’t like, but comedy is so subjective.

What’s the funniest movie of all time?

KLJ: Hmmmmm. You didn’t really think a comic could choose just one on most of these questions right? The Blues Brothers, Duck Soup, Modern Times, Take The Money and Run, Zelig.

JT: Might not be a popular choice but I fucking love Weird Science. One of the most quotable movies of all time. I just love it.

Any advice for young comedians starting out?

KLJ: So much. Be careful about people advising you to not do the things you do that make you stand out. I’m sure Bobcat was told to stop yelling, and Hedberg to stop looking at his feet. Newhart’s stutter would have been lambasted had he ever done open mics. Also, as soon as your able to, work comedy into your budget, become financially dependent on it so you’ll keep doing it even after you start to hate it.  I’ll stop there. Could go on all day. Old comics LOVE giving advice.

JT: Don’t just hang out with comics. Don’t let being a stand-up define how you spend every waking hour. Keep doing other things in addition to hitting mics. You’ll find that you’ll have an easier time writing if you continue to live a life outside of stand-up comedy. I think Pete Holmes said “Live a life worth commenting on.” I think that’s pretty great advice.

Why should people come out and see you guys on tour?

KLJ: We’re hilarious and we’re not talking about the same old bullshit.

See Keith and Johnny on the Stand Up! Records The Special Snowflake Tour 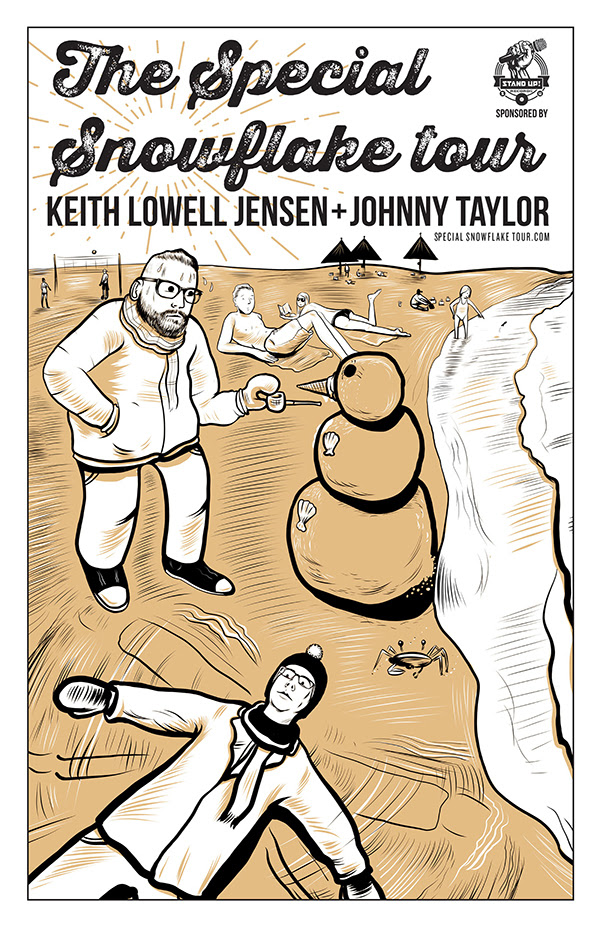