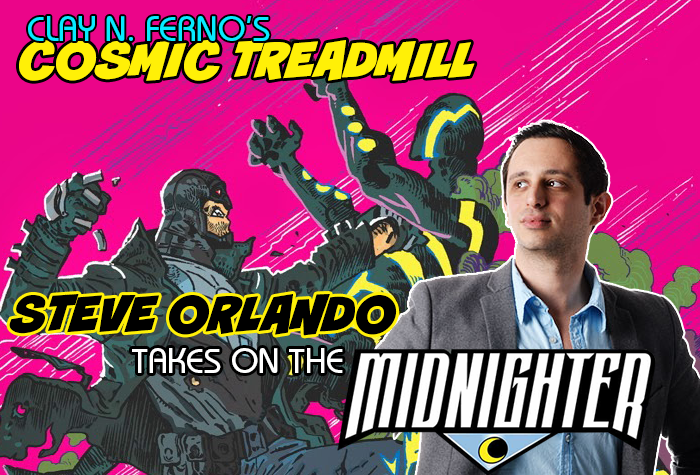 Today launches the New #DCYou continuity and one of the books debuting is Midnighter.

Midnighter was created by Warren Ellis and Bryan Hitch in 1998 as part of Stormwatch. He’s been featured in The Authority as well as a short lived mini Grifter & Midnighter and his own series before being a part of the DC’s New 52 Stormwatch and Grayson books.

Steve Orlando (Undertow, Image Comics) reintroduces Lucas Trent and his alter-ego in the latest from DC Comics and is here to tell us about what it means to have an openly gay male superhero hit the shelves!

FOG!: Fans of The Authority and Stormwatch might know Midnighter, and of course we’ve seen him in Grayson recently fighting Spyral. But really, Who is this guy? 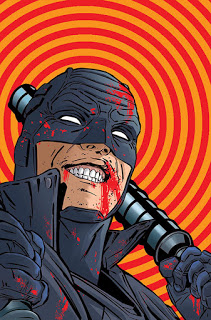 Steve Orlando: He’s a fighter! Midnighter has been engineered to be the greatest, and he’s a weapon, a sword. That’s part of his core. But he’s found a way to make it into a positive, and he fights for those that don’t have anyone to listen to them, or fight for them.

He’s the clenched fist that’s on your side when maybe no one else will hear you. Midnighter’s past was stolen, and in its place he was programmed to be a fighting machine.  And he doesn’t want anyone else to go what he went through. He’s fighting to make sure no one else has to become another Midnighter.

Midnighter is the guy that is puts the fear into the fear mongers.

Is Midnighter prescient? If he can tell how a battle will end, why does he even bother?
I always got a kick out of the Arrested Development gag, “Its like we finish each other’s… …Sandwiches!”

Midnighter definitely isn’t prescient. If he looks at something like a fight, he can see all the different ways it can play out. But it doesn’t mean he can automatically win. 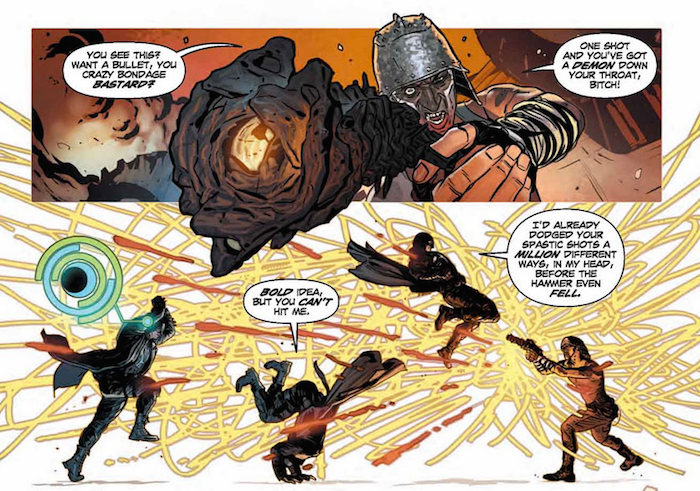 Imagine him fighting Doomsday – sure he could figure out ways to hit him and maybe dodge him forever but he would never be able to hit him hard enough to hurt him. We’ve seen it, like when he fought Regis in The Authority. And the tendency to look at everything like a fight helps him and hurts him, because not everything in life is about combat.

And it’s all about how that power plays out. What if he’s in a fight and he can’t SEE a way to win? What if his fight computer tells him he’s going to take it on the chin? Any character can be injected with drama, from the Specter and on down, and it’s all about the framing of the powers and the way they play on the page.

What is fun about writing a violent character like Midnighter?

It’s his own joy in mayhem! Midnighter loves what he does, he loves his job, but his job is horrifying. And it’s his moment to be who he is. Midnighter is the guy that does something so cool that even other heroes say, “holy damn that was cool”!

And it’s a character rooted in the manic energy — the same over the top feel of a summer action movie. And comics let you play with an unlimited budget, where the only limitation is the page itself– and sometimes maybe not even that!

So with Midnighter there are no rules for our action scenes, other than each has to be even crazier than the last. 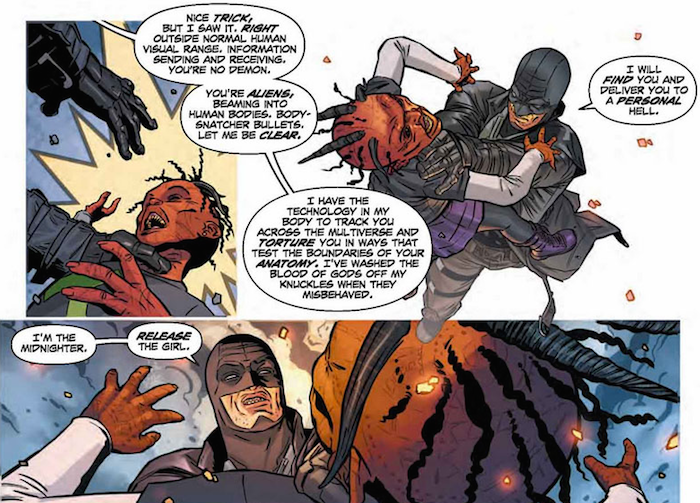 My pitch when telling my friends about Midnighter is that he’s similar to a lot of heroes out there that you already like,a tad violent vigilante. Oh, and he’s openly gay. With the Caitlyn Jenner news this week, I am hoping that sexuality is more of a fluid idea in the mainstream.

I think it definitely is! Certainly there were a myriad of responses to Caitlyn, but in reality any time you push the envelope there will be impassioned responses on either side.

The fact is, there is no one way to be queer and the face of the community is changing. The everyday education and cultural literacy level is changing, and it’s the right time to punch ahead with a gay male lead that’s every bit as confident, bold, and awesome as his counterparts. 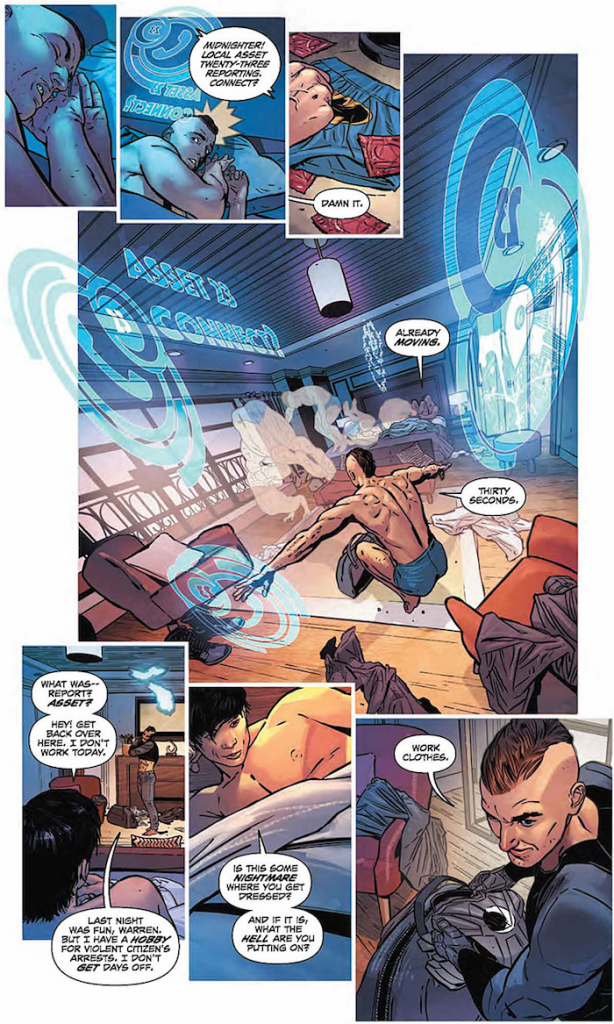 Is it even a big deal that Midnighter is gay? It certainly isn’t to me—in fact, I hope this sells more books to some LGBTQA fans who now have a superhero in their corner.

Within the text it is not a big deal, because being gay itself should not be a big deal. But without the text, it’s certainly a big deal to see a gay male character leading his own solo title at a major publisher.

I certainly hope we give a face for more of the queer readership to identify with. That’s the job of comics, to show people that there’s someone like them, and to give them their own personal myth.

Midnighter was chasing Spyral in Grayson. Is there going to be a continuing battle with the evil spy ring or are we onto something new in the first arc? Did you consult with Tim Seeley on your story?

I consult with Tim Seeley on a lot of things but for now Midnighter will be working away from Spyral. We saw him walk out on the God Garden in his last appearance, and so for the initial arc he is working to solve his own problems.

He gets sucked back into work for the Gardener, she’s family, he can’t say no. But he’s on the ground, tracking bad science and hunting the person who stole from the God Garden.

But that said Midnighter and Grayson are epic frenemies, and seeing them interact IS a thing of wonder.

Last question — and we always make it ridiculous. If you could see a few steps ahead, what would you use that power for? I’d likely use this to predict the quality of my burrito enjoyment/disappointment.

Listen when it comes to Burritos I already HAVE that power as I watch some well intentioned college kid overfill my Chipotle and then struggle to seal it shut with guacamole.

I think I would use the power to finally win at the Fruit Wheel at the casino (the wheel with fruit images where you bet on which one it will land on). And it’s not because I want to get mad money gambling. It’s because you don’t even need to use logic or smarts to win the fruit wheel and yet I have lost it every time.

A toaster could hypothetically win the fruit wheel, and I haven’t. 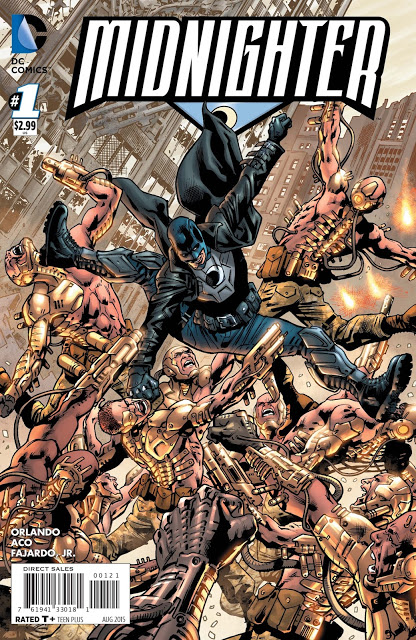