It’s been almost twenty years since Brian Wood exploded onto the comics scene with his dystopian Channel Zero, which he both wrote and illustrated before he focused his energies as a graphic designer for both web and videogames.  After a brief run on Generation X under Warren Ellis, Wood returned to comics, creating Couscous Express, The Couriers, Jennie One, Pounded and Fight For Tomorrow.  In 2003, Wood left his job at Rockstar Games to focus on comics fulltime.

His latest project published through Dark Horse Comics, Rebels, focuses on a homegrown militia movement formed in rural America and how the marriage of young Seth and Mercy Abbott is tested as the war for independence plays out across the colonies.

Brian took some time to discuss Rebels, his research and his upcoming projects.

FOG!: Like yourself, I was born and raised in New England.  What was a bigger influence on your creating Rebels, the setting or the Revolutionary War?

Brian Wood: It’s all wrapped up together for me in a lot of ways.  When I think about Vermont, I think of childhood, and along with that comes playing in the woods, school, local history and landmarks.  If I had to choose, I would say the setting is what I get the most emotional satisfaction from, but the Revolutionary War is a VERY close second.

What was the genesis of the project?

I’ve written historical comics in the past, and I always knew I’d do it again, it was just a question of what the subject would be.  It wasn’t that hard a decision, I just took a little time to think about what I could easily research, what I thought readers might care about, and what I could lose myself in, what I could get emotionally invested in and channel that emotion into the stories.  Sort of a no-brainer, really.  Using that criteria, this was the only choice open to me.

I wrote up a pitch, showed it to Dark Horse, emailed Andrea and Jordie and Tula to see if they’d be interested, and it was as simple as that.

So much of your work is set in a clearly defined environment.  What kind of research did you do you in preparation for this project?

A lot of it was just dredged up from the back of my brain, and I’m talking not just about cold hard facts, but how things feel and look and accents and such from growing up in Vermont.  Beyond that, I read a lot of books.  Books are great, I’m a fast reader and I can absorb a lot of information in a pretty short amount of time. 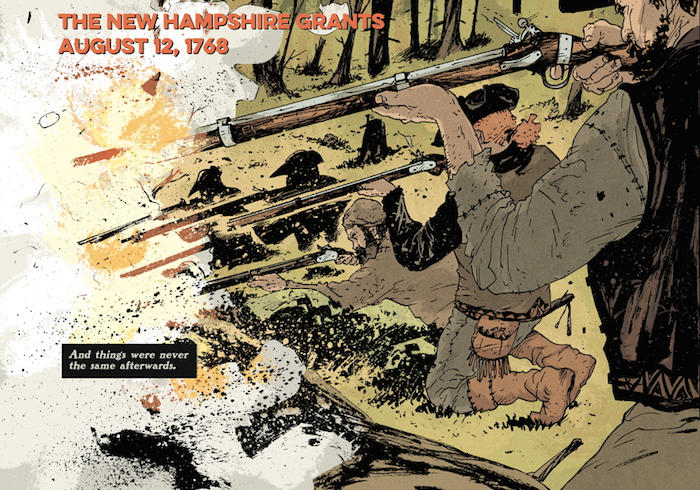 Lastly, I watched a lot of TV and movies on this subject, trying to figure out how to depict the clothing of the times in a credible way. That’s the problem with history—the clothing can very easily just off as a costume to modern eyes, silly and fake.  I looked at the John Adams miniseries and Last Of The Mohicans for some visual reference.

There’s a moment in issue two when it’s mentioned that Seth is seventeen, and it was a quick reminder of how young so many soldiers were at that time; is Seth Abbott based on any actual historic character?  What’s his role in the series?

He’s an everyman character, sort of a combo of what I imagine were the types of people living up there at the time.

And that’s also his role, to be the ‘tour guide’ that takes us through some events and also embody the emotional journey of the times, that of a small person taking on a much larger person with the best of goals driving them forward.  Similarly, Seth’s wife Mercy depicts the other side of the whole “soldier gone off to war” thing, which is often portrayed a a noble act.  Which it can be, but there’s always a flipside to that.

There are also some really lovely quiet moments that are executed beautifully by artist Andrea Mutti and Jordie Bellaire. How did they come to the project?

I’ve worked with them both!  Andrea did some sort runs on DMZ and Conan the Barbarian, and Jordie colored The Massive.  So it was an easy as asking them.  Putting together a team for a project is always a leap of faith, and I try to never take it for granted.  They do terrific work.  And Tula Lotay, our cover painter, this is the first time I’ve worked with her and she’s amazing.  I give her credit, as a British citizen, for agreeing to work on this project! 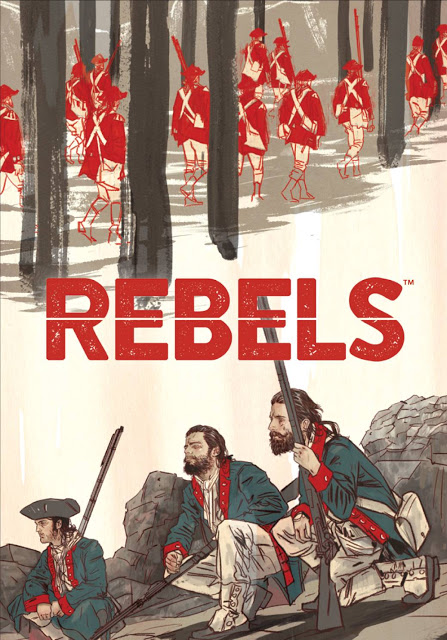 Your work also tends to have a very set beginning, middle and end.  I know Rebels is intended as a six issue series and four one-shots.  Would you want to go beyond the initial story and continue Seth and Mercy’s journey?

Seth is continued, in small ways, in some of the one-shots, but that’s really all I have planned for him.  Never say never, of course, but assuming we do another run of stories, I’d like to shift the focus to something different.  Sort of the point of a series like this is to use varying points of view to paint as full a picture of the times as possible.  Someone like Seth, that’s only a tiny aspect of who people were and what they went through back then.

I’m about to launch a book called Starve over at Image Comics, a darkly comic look at celebrity chef cooking shows and foodie culture. 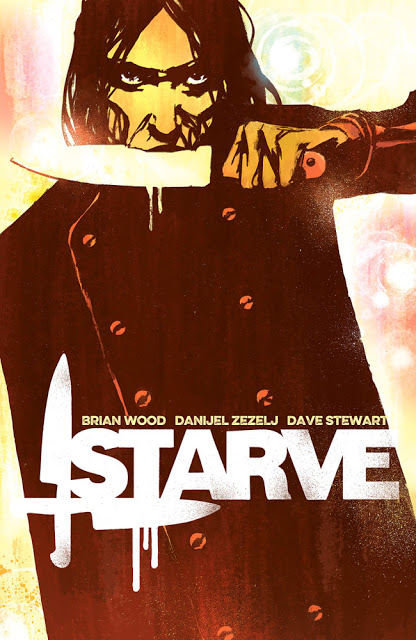 Much later this year, there’s Black Road, my return to Viking comics.  I recently wrote the screenplay for 1979 Revolution, a video game, and have some unannounced television stuff I’m working on.  All very exciting.

I’m coming to this VERY late, but I’m working my way through House Of Cards.  It’s amusing to me, in a rather horrific way, that this is the legacy of the founding fathers.  I mean, they were far from perfect people but can you imagine the horror they would feel at the current state of American governance?  And how modern politicians evoke their names and deeds to justify their cynical and corrupt actions?  It’s an interesting contrast, watching that show at night and waking up in the morning ready to write some Rebels.