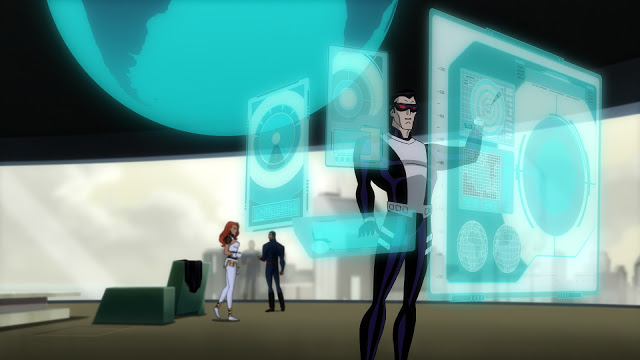 Animation legend Bruce Timm returns to the popular DC Universe Original Movies with his unique new vision of a Justice League you’ve never seen before. Justice League: Gods & Monsters features a Superman born of General Zod’s blood, a Batman with a healthy dose of bat in the man, and a Wonder Woman rising from the ranks of the New Gods. This ain’t your daddy’s Justice League. They are as likely the world’s saviors as Earth’s despotic rulers. When a group of famed scientists experience untimely “accidents,” a government task force follows the trail of clues to the Justice League — and into a high stakes game of intrigue, mystery and action that asks the question: How do you serve justice to those above the law?

The feature-length animated thriller will have its World Premiere on Friday, July 10 at 7:00pm in Ballroom 20 at Comic-Con International in San Diego. Tamara Taylor and Paget Brewster have already been confirmed to attend the World Premiere at Comic-Con.

After the jump check out the first official clip, which features Superman (voiced by Benjamin Bratt), Wonder Woman (Tamara Taylor) and Batman (Michael C. Hall) discussing the public’s perception of the Justice League, versus the public’s need for their leadership and protection. Lois Lane (Paget Brewster) is also featured in the clip.

Justice League: Gods & Monsters will be released by Warner Bros. Home Entertainment on Digital HD on July 14, and as a Blu-ray Combo Pack and DVD on July 28.