Los Angeles is many things. The epicenter of the film industry, home to millions of wannabe and reality stars, a great place to patio dine in December. And a target by big budget disaster films.

This month, San Andreas, unleashed the latest of what-if scenarios on the City of Angels as the thriller offers an unrealistic take on what might occur if Los Angeles was every hit by “the big one.” Watch as buildings crumble and people run for cover as an earthquake of magnitude 9 earthquake levels the major metropolis in just a few minutes.

San Andreas is just the latest pic to take aim at Los Angeles, which has often been fertile ground over the years for big-budget disaster pics. In the last 20 years, LA has been destroyed by earthquakes, volcanoes, aliens, weather anomalies, zombies and the apocalypse.

From all the destruction, audiences can surmise two things:

(As a lifelong resident of Los Angeles, it’s hard to hate movies that take great care in making sure to wipe out key childhood memories with glee. There is something hilarious in watching the park you grew up in dissolve in hot lava, or having the memory of your first kiss become a battlefield for the US Army.)

Here is a quick look at all the ways Hollywood has attempted to wipe Los Angeles off the face of the earth:

This is an easy one. Have a major city sitting on a fault lines easily lends itself to a disaster script. Also, filling those scripts with shallow, terrible people makes it easy to watch.

Before San Andreas, there was the God-awful Earthquake in 1974. Starring Charlton Heston, audiences were treated to different what-if situations such as plane landings, movie theaters and freeways. 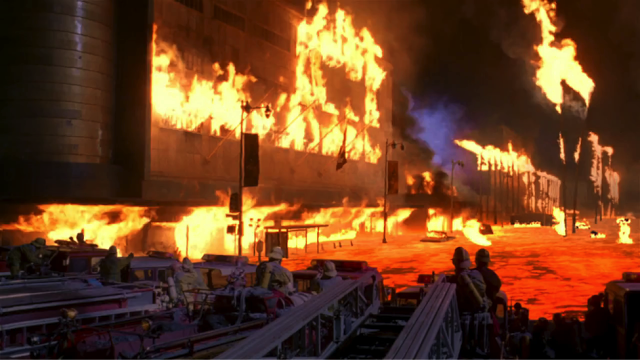 The best part about 1997’s Volcano is the route the lava takes.

It starts at the La Brea Tar Pits on Wilshire, it then supposedly takes a few hours to go three blocks to Fairfax and Wilshire where it then makes a right hand turn to head over to the Beverly Center for a little shopping. It’s like it’s purposely taking out all my teen hangouts.

Also, I like how authorities keep blowing up buildings to block the lava from “entering the city.” They must be Valley folks.

Apparently, aliens hate Los Angeles with the ferocity of a New Yorker or a San Franciscan.

In Independence Day, aliens hovered over Hollywood for a bit before they blasted it to hell and back, while in Transformers giant robots knock over buildings and destroy freeways in their attempt to kill each other and/or the concept of a concise narrative.

Battle: Los Angeles, the city become mankind’s last hope as it wages a defense against attacking space fiends. The same can’t be said for the mediocre Battle: Los Angeles companion movie, Skyline, which sucks up residents into its ships as slack-jawed twentysomethings look on.

The bombed-out shell of what used to be the City of Angels is the backdrop to Resident Evil: Afterlife, another horrible misstep in the once slightly-entertaining videogame franchise.

Zombieland had disenfranchised twentysomethings using Bill Murray’s pad as a safehouse in the midst of zombie outbreak.

Not going to lie. That’s exactly where I would go too.

Oh, and let’s not forget that the upcoming The Walking Dead spin-off will be set in LA, so soon we’ll get to watch the destruction from the very beginning. Yay!

In Escape from LA, earthquakes have turned Los Angeles into a free floating Godless island where the people are forced to create their own society. As it happens, it clashes with the moral majority that rules the roost in DC.

As a result, Los Angeles becomes a community of exiles, made for people who partake in smoking, drinking, red meat, illegal marriages, atheism, cussing, spitting, pre-marital sex and drugs.

So, no real change there.