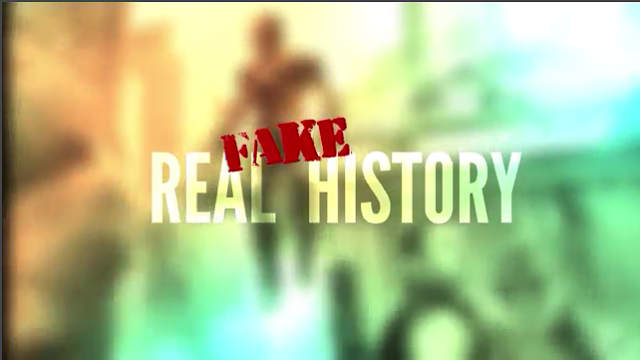 Real Fake History has launched with Star Wars: The Battle of Endor.

This 10-episode series parody of the History Channel, Real Fake History has produced these “Ken Burns style,” shorts,  recounting the greatest fictional battles and most inspiring stories in movies, TV, and video games from Endor to Gotham City, The Battle of Castle Black, The Massacre at the House of Blue Leaves, and six more (a complete list of the episodes with descriptions is after the jump).

Star Wars: The Battle of Endor
While Rebels and Ewoks fought hand-in-paw, the Millennium Falcon‘s mission was almost undone by two co-pilots who had no idea what Nien Numb was saying.

Mike Tyson’s Punch-Out
Witness the exclusive, never before seen tale of Little Mac’s rise to champion of the Video Game Boxing Association, and the life-altering costs.

The Avengers: Battle of New York City
Super-powered heroes fight for Earth during an alien invasion, but the true stories of loss and heroism happened to regular folks on the ground and in the office buildings Hulk destroyed.

Pacific Rim: The Battle of Hong Kong
The Captain of a docked oil tanker is the unintended victim of Jaeger robot Gypsy Danger‘s last-ditch defense of Hong Kong.

Kill Bill: Massacre At The House of Blue Leaves
On paper, Beatrix Kiddo shouldn’t have had a prayer against the entire Crazy 88s. Medical experts and eyewitness account tell the story of the Crazy 88s literal dismemberment at the hands of The Bride.

Starship Troopers: Disaster on Klendathu
The Federation’s assault on the Arachnid planet Klendaathu was a disaster that cost the lives of 308,563 human troops. When you practice on human targets and take hot co-ed showers every day, how can you be good at killing bugs?

Starcraft 2: Eugene vs. Jay
When two roommates decide to take their rivalry to the battlefield, only one Terran or Zerg army will survive the fight… or will they?

The Walking Dead: Woodbury’s Assault on the Prison
In the middle of a deadly, calculated attack on Rick Grimes and his allies, Michonne discovers two unlikely zombies brought together by fate.