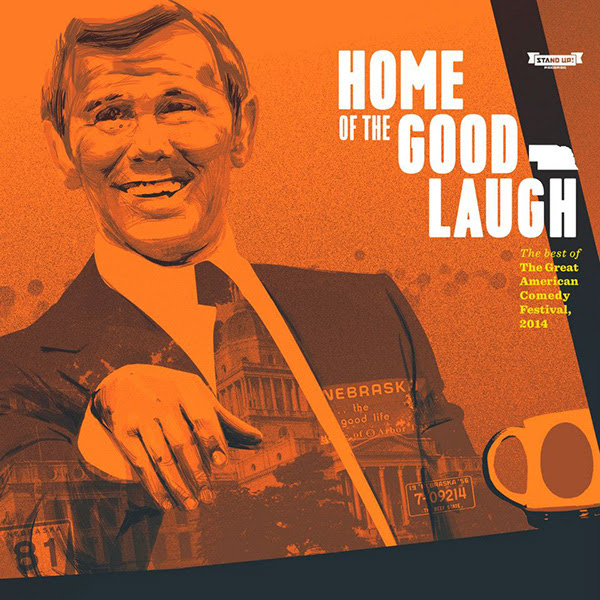 Stand Up! Records announced this week the release of Home of the Good Laugh, a various artist compilation of 12 comedians, recorded last year at the 7th Annual Great American Comedy Festival in Norfolk, Nebraska.

Those outside Nebraska probably think Norfolk, NE is, in fact, pretty damn funny. Just not like this. Recorded live at the 7th annual Great American Comedy Festival, this compilation brings together 12 distinct voices, from Georgia to Washington, from Tracey Ashley to Jenny Zigrino.
Grant Lyon gets the party started with mundane birthdays, amazing obituaries, and mom denials; Grayson Morris brings the chimney rats, Internet dates, and the Trail of Tears (separate stories, we promise); and Andy Huggins tells the kids to get off his lawn. Ashley journeys from the loving arms of Slappy Mae to Minnesota; Jacob Williams gets “cougared” and tries out comedy; Karen Morgan makes a lateral career move but a vertical geographic one; and Mike Spiers finds a few good reasons to avoid running (or even falling particularly far). Rounding out this curated collection, Mitch Burrow endures an accent that reveals too much about his childhood; Robbie Slowik is down for Popes and pandas, but tries to avoid banal nationalism; Zigrino finds the sweet spot of self-esteem; Mark Pitta masters acronyms and messing with friends and strangers; and Brian Kiley crafts a seven-minute set that sounds like Woody Allen and Steven Wright formed a supergroup.
All of which is to say, in 12 tight tracks, Stand Up! Records and the Great American Comedy Festival bring you a bounty of laughter, straight from the heartland.
Stand Up! Records is based in Minneapolis, Minnesota and run by Grammy-winning comedy producer Dan Schlissel. With a growing catalog and more than 130 releases, they have a 14 year history as a champion of the underdog.  More than just a record label it is a comedy brand juggernaut; combining comedy, great art, discovering new talent, founding comedy festivals and also producing cool stuff.