He-Man and the Masters of the Universe wasn’t just a popular cartoon, but it was an animated series that defined a generation. Those who grew up in the 1980’s fondly remember the show for its campy vibe and the colorful cast of characters from Eternia.

Oh, and who can forget the fun filled plastic epidemic that was unleashed onto the general public by Mattel? Children were enamored for hours on end with a plethora of figures, vehicles, and play-sets

Parents, on the other hand, wondered what the difference was between Battle Damage He-Man and Thunder Punch He-Man as their bank account was drained in increments of $5.99.

DC Comics currently owns the comic book rights to this beloved franchise and released a six issue mini-series in 2013 followed by the release of an on-going series later that year.

While there are some great story-lines such as Orko turning evil, most of the story were dull due to poor execution. Also, the dialog painfully failed at taking a pages out of the Game of Thrones playbook.

British writer Dan Abnett has taken the helm of the newest installment of the series, He-Man: The Eternity War. Along with artist Pop Mhan and colorist Mark Roberts, this trio have created a synergy that has taken the campiness out of the equation while sticking to the core essential values that made fans absolutely adore MOTU.

There has always been this untapped mythology that the re-imagined 2002 animated series did a decent job of tapping into, but Abnett and company establish new folklore that adds to the mythos of we already know.

Let’s dive into the first six issues of the series. 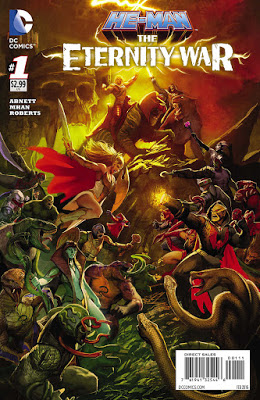 First of all, this beautiful cover drawn by Stejpan Sejic perfectly illustrates the theme of this issues as characters on both sides of the conflict are highlighted in grand fashion.

This serves as a great jumping on point for new readers as the war to end all wars has begun.

In one corner, you have the villainous Dark Horde lead by Hordak.

In the other, we have He-Man who leads Enternia’s finest and the Snakemen.

Hordak has not only taken over Castle Grayskull but has tapped into its power while He-Man and his army have taken refuge in an unoccupied Snake Mountain.

If that that isn’t enough to make your head spin, there is plenty more where that came from in the shocking changes department.

What makes the story flow smoothly is that these changes aren’t there just to make a little noise.

There is a real Empire Strikes Back sense of peril as our heroes are already in dire straits while the Horde has discovered items that will make them beyond unstoppable. Dan Abnett taps into the will to survive as Team He-Man are large in number, but resources are almost exhausted.

Man-At-Arms steals the show as his man’s man bravado exudes off the page, throwing fists at anything that gets in his way. He is still level headed and He-Man’s trusty right hand man, but he is more than that here, which is refreshing.

While the detail in Pop Mhan’s character work leaves a little to be desired at times, he does a great job at visually conveying how large in scope this war really is. From the Fright Zone to outer space, this war seems to have no limit as to where it will go.

Going back to Hordak, the thought of him acquiring the power of Grayskull, hoisting up his own sword and yelling “I AM THE POWER” sent chills up and down my spine as a pretty freaky transformation takes place. Mark Roberts’ color treatment really makes this moment stand out which ultimately serves as the holy @$#%& moment of the book. 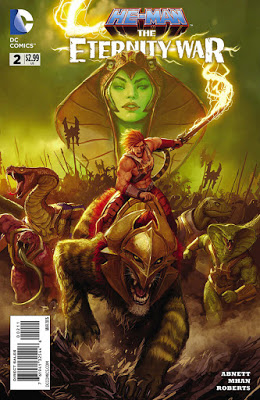 The battle of Mount Zor is upon us as He-Man and his army square off with the Horde lead by Mantena. Abnett produces more great moments with Man-at-Arms as he not only has a plan to turn things in their favor, but he also has a heartfelt conversation with He-Man.

Man-at-Arms brings up that King Adam hasn’t been around for a while, but He-Man feels can’t afford to transform back to Adam with so much at stake.

I have a feeling this plot point will come back and serve a bigger purpose.

Did you know that Castle Grayskull can be turned into a weapon that is worse than the Death Star?

It requires two artifacts in order to make this a reality.

One of them is lost in a desert land while the other one is in the possession of Skeletor.

Now that’s someone we haven’t seen in yet. Most believe he is dead, but we all know better.

The visual presentation in terms of detail has evolved from the previous issue as big battle scenes and personal moments have more energy to them. Mark Roberts’ coloring was sport on in every panel as it was dark when it needed to be and vibrant during He-Man’s fight with a particular monster that was also a hit in the original toy line.

Overall, another fun issue with the status of a major character remaining a mystery that won’t be explored for the next four issues. 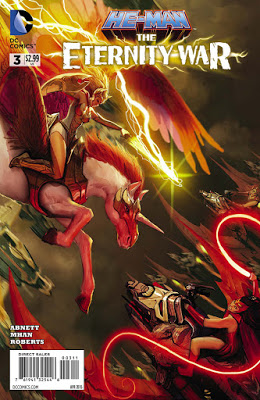 She-Ra gets her turn to lead things this time around as she leads a squadron to the desert land to find one of the artifacts that will turn Grayskull into a weapon.

Katra and Scorpia tangle with the princess of power and it’s a blood bath that is enhanced by a secret that is revealed. Dan Abnett makes this moment pay off whether you’ve read the series before Eternity War or not.

Mhan and Roberts are spot on with the art and colors which was impressive considering the focus is on a new set of characters and in a different landscape.

She-Ra and Swiftwind look glorious at every turn and the coloring borders on majestic.

Hordak shows up on the very last page to confront She-Ra, just as she has found the artifact, which will leave readers with a lot of questions going into the next issue. Hordak has come close to beating She-Ra on multiple occasions. 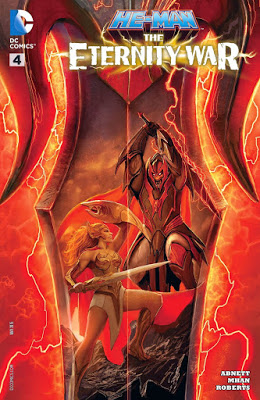 This issue is the Hordak show.

Power is the name of his game and he knows how to use it as he takes out She-Ra’s forces in one fell swoop.

The ground is littered with Wind Raiders and it’s now mano e mano.

If you are familiar the history between She-Ra and Hordak, you know it’s personal. Dan Abnett and Pop Mhan work in perfect tandem as their fight was ferocious in action and in speech.

This was stunning and violent at the same time because it was done so well that I put my hand on my stomach to make sure there was no hole.

Hordak relishes the moment until Skeletor comes out of nowhere to steal the artifact and save She-Ra.

This was another example of how well Abnett and Mhan complement each other as the violence on the page along with the pace of the story is riveting.

Despite Hordak being the big baddie, Skeletor, as only he can, makes his first real appearance count and escapes holding all of the cards. 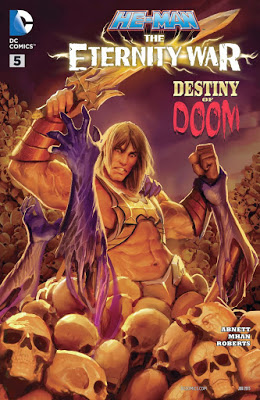 We’ve all seen movies where the bad guy brags about their handy work while letting everyone in on their plan because, well, they’ve already won.

Skeletor has returned after his dramatic appearance in the last issue, and he has both artifacts needed to turn Grayskull into a weapon.

Dan Abnett really has a handle on this character as he works the manipulative nature of Skeletor’s evil deeds. He teases a wounded She-Ra and the readers as to whether or not he will fight alongside her, or against her.

Skeletor refers to her as “my child” as he clues her in on the true state of affairs.

Then, in the blink of an eye, he makes snide comments like “You can’t die yet”, because he still has use for her.

We know that he will always do what’s best for him, even if it means throwing his own henchmen under the bus (Poor Beast-Man).

Skeletor talks about his experience navigating the DC Comics Multiverse, which is the fallout from the events in Master of the Universe vs. DC Comics. There was an awesome page layout that shows many different versions of Skeletor which brings about a startling revelation.

I know this review contains some spoilers, but this page is a must see and will completely change the way you think about this universe. 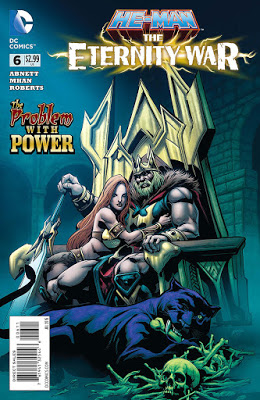 After a two issue break, He-Man returns as he looks 30 years into the future that supposedly reveals the only way he can defeat Hordak.

Needless to say, he doesn’t like it, however, the way things have played out so far, and it might be the only option.

This issue has a different vibe form the previous ones as Pop Mhan and Mark Roberts’ visual contributions really show splendor and beauty instead of a war torn Eternia.

Pomp and circumstance fills the air, only to hide the seedy underbelly of affairs.

While the story of absolute power corrupts absolutely has been told ad nauseam, it works well enough here. Every clue and piece of advice that the Sorceress has given to He-Man has served him well. Why would this be any different?

Remember in the second issue when Man-at-Arms cautioned He-Man about not being Prince Adam (now King Adam)?

Well, it turns out that being He-Man on a permanent basis isn’t necessarily a good thing,

Huh, who would have thunk it?

He-Man and his pals have had nothing but bad luck since DC Comics started telling their stories. Dan Abnett has proven he can juggle multiple characters while seamlessly honoring and adding to the mythology.

Character development, engaging plot points, and fun illustrations has made He-Man: The Eternity War, so far, a must read event for MOTU fans.

In this article:Book/Comic Review, Comic Books/Strips, Masters of The Universe