Three new number ones this week for our Triple Shot!

Ming Doyle teams up with James Tynion IV for the DCYou take on Constantine: The Hellblazer, Liz Prince (Tomboy) and artist Evan Palmer (Munchkin) step into the world of Cartoon Network’s newest creation, Clarence and we preview next month’s Negative Space #1 from Ryan K Lindsay. 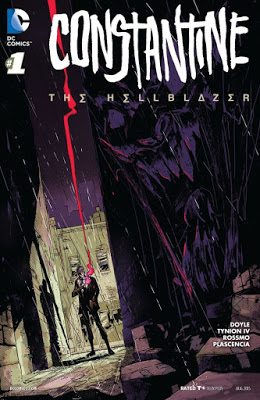 The much beleaguered title and main character has to be an intimidating one — Constantine has seen many forms, from a Vertigo comic to a movie starring Keanu Reaves (what?) and riding the recent wave of comic book television with 2014’s Constantine (RIP).

Getting a handle on the character is no easy task — Vertigo writers in the past include Garth Ennis, Warren Ellis, Peter Milligan, Andy Diggle and many more.

Constantine in the DCU is a younger character and Doyle and Tynion are allowed to play him that way, hopefully to generate a new audience for Constantine as well as bridge the gap with older readers.

This being a DC Comic and not Vertigo hurts the book in my opinion. John Constantine should be able to swear and be raunchy.

Issue #1 isn’t a bad go at the old guy, though. Our demon whisperer shows up naked in a clothing shop covered in blood and brains. Later in the story, he is drafted by Blythe for a quick shag and his first ‘mission’ against some demons.

Riley Rossmo has great stylistic choices for his art, including a landscape splash page cutaway view of the club and by the end of the book gets to draw some cool looking demons.

I’m interested to see where this goes, issue #1 had enough bite to want me to pick up the next issue. This book doesn’t seem to be pandering to any fans of any Hellblazer incarnations — that could be a blessing or a curse once the story develops more. 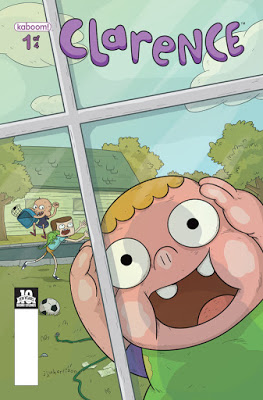 Cartoon Network’s latest weirdo is Clarence, and as is the tradition, BOOM! Studios and KaBOOM! have the rights for more off-the-wall comics related to the show in the vein of Adventure Time and Regular Show.

Clarence and his pals Jeff and Sumo are just regular kids — no super powers or anything.

They seem oddly obsessed with food and eating (like most kids), in fact I’m just basing this on the only episode of the show I’ve watched and this one comic!

He steals off with the crawlers to save them from being fish food. His mom isn’t too happy about the latest obsession as Clarence is now a week later still enthralled with the squiggly creatures.

Liz’ signature humor and love of animals shines through on this story.

The backup ‘fish wish’ by Derek Fridolfs and JJ Harrison is also quite funny.

This is a fun all ages comic if you are familiar with Clarence or not.

I took an advanced look at the latest by Ryan K. Lindsay (Headspace, Ghost Town) a few weeks before it’s release and folks, it’s a heavy one.

A man suffering from depression gets writers block on his last piece of work, his suicide note. Combined with a rather sad looking protagonist drawn named Guy and painted by the talented Owen Gieni (Manifest Destiny), the comic puts you in a mood.

That mood is the blues. That ‘storm cloud over your head, can’t get our of bed depression’ that so many people suffer from.

It turns out that the reason Guy is having trouble with his suicide note is that there are unseen forces manipulating Guy’s feelings from afar. A multinational corporation and monsters feeding on his despair.

This is a heavy book conceptually and a lot to intake, but worth the experience as you get to know Guy and what is motivating the monsters feeding off of people’s misery.

This is another great book from Lindsay and the artwork is intricate and moody.